A British man who lived a lavish life in Kuala Lumpar has ‘disappeared’ after his boss, the former Malaysian Prime Minister Najib Razak, was toppled as the nation’s leader.

Anti-corruption officials are now hunting for British PR consultant Paul Stadlen, 39, who lived in a 38-storey building with a ‘sky gym’ and swimming pool. While there is no suggestion of criminality on Mr Stadlen’s behalf, the public relations chief is being tracked down to help with inquiries.

The Malaysian Anti-Corruption Commission (MACC) appealed on Thursday for help finding the man who controlled his media relations.

Mr Stadlen could be a key witness in the high-profile case, the MACC said.

Until election day, Stadlen worked as a spokesman for the prime minister, as an independent consultant.

It is now believed he fled the country and may have flown to London, before heading elsewhere.

Mr Stadlen lived in the super luxury Loft Sentral Condominium in the city centre and was a regular on the city’s party scene.

The Sarawak Report reported, an anonymous source as saying: ‘Stadlen has a terrible party lifestyle.

‘It’s incredible he gets away with it, working for a Muslim head of Government. He’s always out partying in bars, clubs, getting dead drunk.’

The report was accompanied by pictures of Mr Stadlen with scantily clad women in bunny dress.

Stadlen was extremely close to his boss despite Najib attempting to promote himself on his strict Islamic beliefs.

The investigation centres on the 1Malaysia Development Berhad (1MDB ) fund founded by the former prime minister. It is estimated $4.5bn was stolen from the fund. 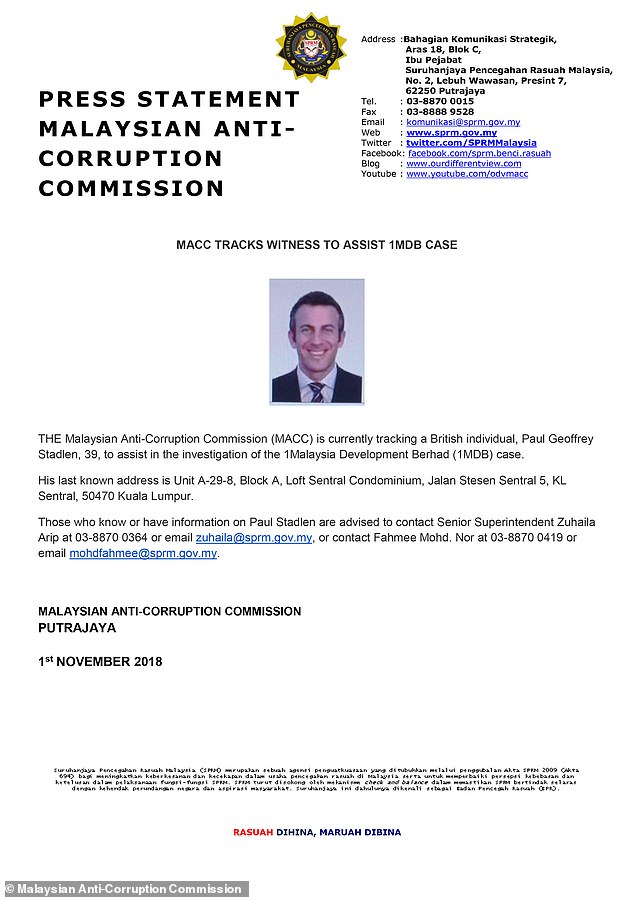 Mr Stalden began to work for the prime minister after meeting him when working for an international firm in the country from 2009. After the firm lost their contract over a PR scandal Mr Stadlen stayed on, it is reported.

Mr Stadlen himself worked for a while in journalism before joining PR firm APCO worldwide.

His acquaintances called him ‘ruthless’ in supporting Najib and said he was ‘devoted’ to his boss.