Amsterdam has warned rowdy British and Dutch tourists who ‘party excessively’ in the city that they could face stiff fines, in the latest campaign to halt drunken mayhem on the streets.

The campaign specifically targets men aged between 18 to 34 years, who are increasingly attracted by the freewheeling Dutch capital’s beer-drinking and soft-drug culture, as well as the salacious draw of its red light district.

Enticed by cheap travel, groups of young men – mainly from elsewhere in the Netherlands or Britain – frequently roam the inner city’s canal-lined streets at weekends, on elaborate pub crawls or to celebrate noisy stag parties.

Amsterdam has warned rowdy British and Dutch tourists who ‘party excessively’ in the city that they could face stiff fines, in the latest campaign to halt drunken mayhem on the streets

‘All too often the result is drunkenness, noise in the street, litter and public urination,’ Amsterdam Marketing said, launching its Enjoy & Respect campaign.

It warned that there was a ‘high price for bad behaviour’.

Under existing laws, those caught peeing in the streets can be fined 140 euros (£122), the same fine as for raucous late-night singing outside homes and residences instead of in bars and clubs.

Some 18 million tourists flock to Amsterdam every year – more than the entire population of the Netherlands – and over the past year, the city has taken major steps to push back against unruly visitors.

‘Surveys on quality of life have shown this is a serious nuisance source to residents, local business people and other visitors,’ Amsterdam Marketing said.

The innovative campaign focuses on four kinds of behaviour seen as causing the most trouble: public drunkenness, noise, littering and public urination. 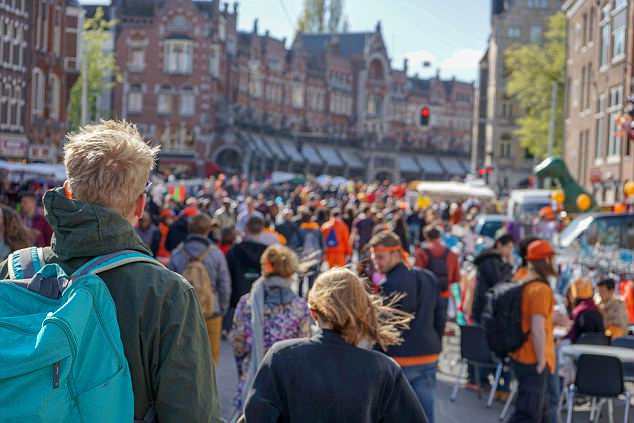 It will be highly visible on billboards around the city – particularly at its bustling Leidseplein and Rembrandtplein nightlife areas and also online from the moment a visitor does a search to book a trip.

‘Bursting for the loo?’ one poster asks with a red rectangle imposed over the urinal saying ‘Free’, while another rectangle encompassing the street says ‘140 euros’.

‘We want people to behave, but we are not going to wag a finger at them like a parent,’ Amsterdam Marketing says in a video to promote the campaign.

‘Instead the goal is to increase awareness to what is or isn’t allowed in the city by presenting good behaviour as a freedom of choice,’ it said.