Passengers chant ‘Off off off!’ after British lawyer argues with EasyJet crew over face masks

Passengers chanted for a British lawyer to be thrown off a plane after he refused to wear a face mask ‘due to his PTSD ‘.

Flight attendants tried to persuade Mr Stead to put his mask on before becoming enraged at the ‘way he spoke to them’.

The part-time lawyer, from Islington, London, began reciting the 2010 Equality Act to justify why he should not have to wear a mask due to his PTSD – even though he was in Egypt so it would not apply.

Staff eventually told him to leave the aircraft before escorting him down the aisle to chants of ‘off, off, off’ from fellow passengers.

But the father-of-one claims he eventually backed down in order to get the flight home and wore his mask after feeling ‘intimidated and humiliated’ by the ‘mob’.

In the clip, recorded by a fellow passenger on September 26, the plane’s captain could be heard telling passengers that they must wear face masks as Mr Stead tried to defend his actions.

The crew stated that they would have to inform the captain about his refusal and returned just minutes later to reiterate the need for Mr Stead to wear a mask.

Mr Stead did not have any proof of his disability with him, aside from a photo of his disabled parking badge, which was dismissed as ‘not enough evidence’ when shown to the captain.

In part of the exchange not recorded in the video, Mr Stead claims he told staff ‘if you want me to get my bag, you get my bag then’. 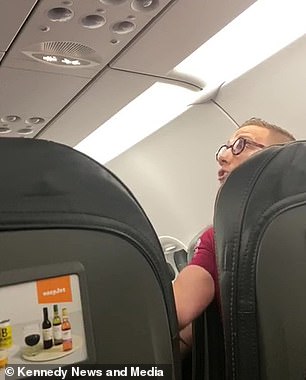 In response, one member of the cabin crew, who had spoken calmly to Mr Stead in the first instance, told him ‘not to speak to them like that’ and pleaded ‘please be respectful’.

Mr Stead was eventually ordered to leave as his fellow passengers shouted ‘get off the plane’ followed by chants of ‘off, off, off’.

Other angry onlookers yelled ‘take him off’ and ‘f**k off you t**t’ as a child started to cry during the furious commotion.

The frustrated flight attendant could be heard saying ‘people want you off, you are off now’ before Mr Stead was led down the aisle to the front of the aircraft.

But, faced with being returned to the airport with his bag still in the plane’s hold, Mr Stead eventually gave in and wore his mask for the full flight. 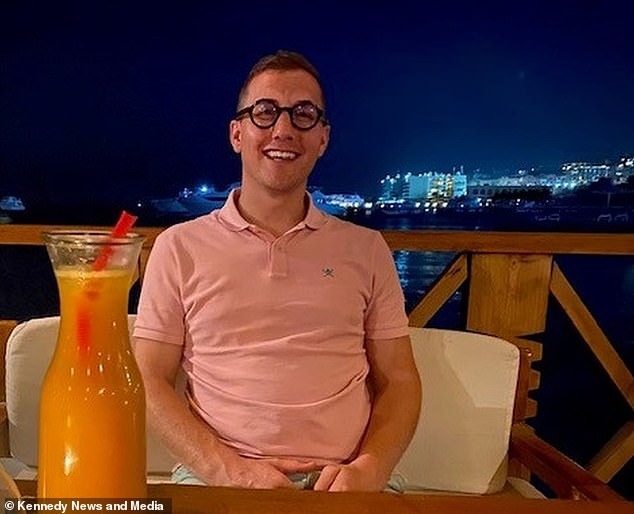 The part-time lawyer (pictured), from Islington, London, began reciting the 2010 Equality Act to justify why he should not have to wear a mask due to his PTSD – even though he was in Egypt 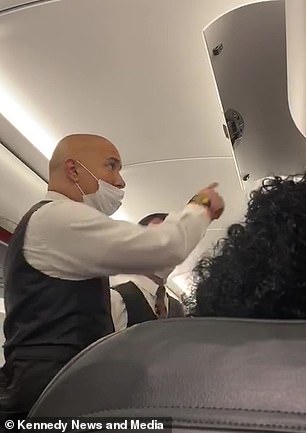 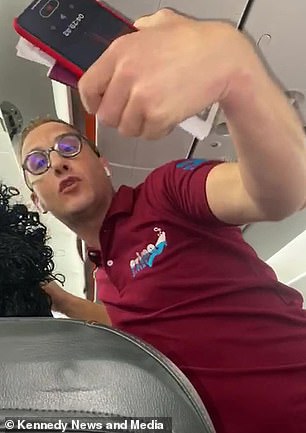 Mr Stead is eventually ordered to leave as his fellow passengers shout ‘get off the plane’ followed by chants of ‘off, off, off’

Mr Stead has since said that covering his face brings on post-traumatic stress disorder because it reminds him of the oxygen mask used to ‘keep him alive’ after he was stabbed in 2012.

He believes that the other passengers turned on him because he was ‘well-dressed’ and they had assumed he was just ‘some wealthy guy trying to pull a fast one’ – but insists he has a hidden disability.

EasyJet claimed that Mr Stead had not mentioned any medical exemption in the first instance and simply stated he did not have to wear a mask.

He did later refer to his disability but ‘failed to provide either a medical certificate or a Government exemption’ for not wearing a mask and added that a parking permit did not count.

The company also said that the Equality Act itself states it does not apply while on board a plane – particularly when it is grounded on Egyptian soil. 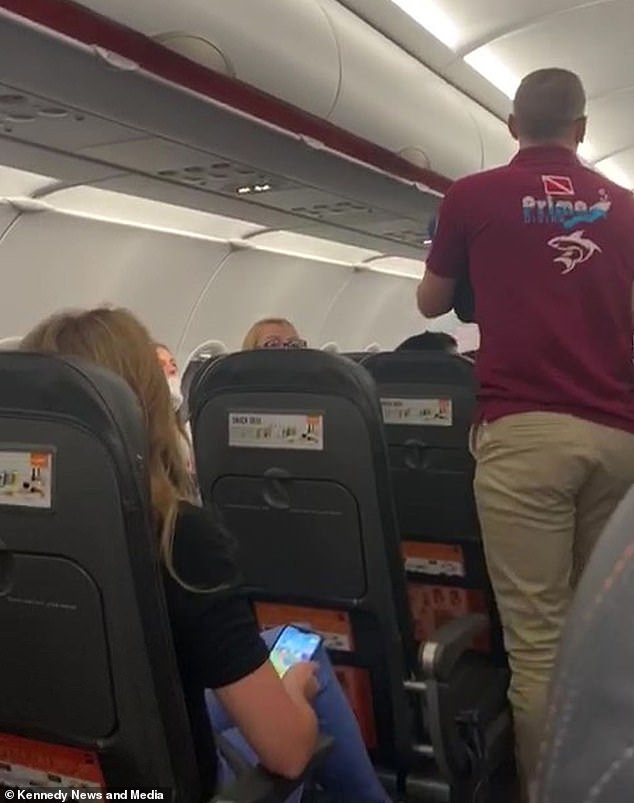 Mr Stead is escorted down the aisle but, faced with being returned to the airport with his bag still in the plane’s hold, Mr Stead eventually gave in and wore his mask for the full flight

Mr Stead said: ‘It was like I was being attacked by a pack of wolves. [The other passengers] were so quick to judge and it’s wrong.

‘They just assumed the staff are always right and that I was being difficult. They didn’t really know what was going on.

‘I think people had got the impression that I was refusing just for the sake of it, but it’s just mob mentality and it’s absolutely abhorrent that in the 21st century EasyJet allowed this to happen. 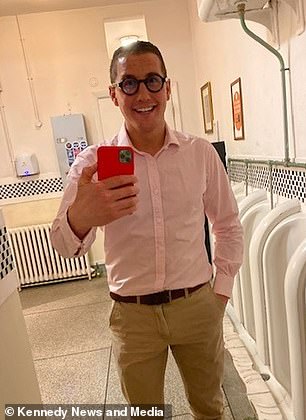 ‘It was intimidating, humiliating and the sort of behaviour you would expect towards somebody who’s gay in the 60s.

‘I’m genuinely disabled. I struggle with my post-traumatic stress disorder. It’s not a made up condition but it’s a condition that’s invisible.

‘I dress well and I look perfectly normal, and people assume I’m just some wealthy guy who drives a nice car, walks perfectly fine, looks fine and I’m just pulling a fast one.’

Mr Stead, who lives on his own, had been on a ten-day trip to Egypt to go scuba diving and to search for properties and land to invest in.

He claims he was allowed to travel to Hurghada from Gatwick Airport without having to wear his mask after explaining his disability to a flight attendant.

He added: ‘The Equality Act is in place for a reason. They must follow that and they mustn’t discriminate against people that have a hidden disability.

‘[The staff] didn’t seem to understand that the company policy isn’t able to override law and the flight attendant kept trying to walk off when I was trying to explain to him.

‘The captains need to be made aware of the Equality Act, because the captain is the one that had the final say, but he’s just a driver. How the hell does he know about it?’

Describing his PTSD, Mr Stead said: ‘When I was in the ambulance [in 2012] I was strapped down and I had the oxygen mask on me, so when I have a face covering on it causes me problems psychologically.

‘Sometimes I can wear a mask for a few minutes and it’s fine but then all of a sudden I’ll have a flashback and it’ll trigger something and I’ll start acting all weird. It’s embarrassing.’

An EasyJet spokesperson said: ‘The primary responsibility of our crew is for the health and wellbeing of all customers and during the pandemic this is more important than ever.

‘For the safety of all onboard and in line with EASA guidelines, easyJet requires all customers to wear a face covering and we ensure customers are aware of the requirement throughout their journey from booking onwards. It is also mandatory to wear a face mask in Egypt, where this issue occurred.

‘We know some passengers may not be able to wear a mask and so we inform all customers ahead of travel of what to do if they require an exemption.

‘We are sorry if Mr Stead was unhappy with how this was handled onboard however the crew have a responsibility to all customers onboard.’