Authorities are on high-alert to prevent another Ruby Princess-style debacle as a plane filled with coronavirus-infected passengers is just hours away from landing in Australia.

The 112 Australian and New Zealand passengers have spent 14 days on the Greg Mortimer cruise ship, which was docked off the coast of Uruguay when it was hit with an outbreak of the deadly disease.

Australia has recorded 6,303 cases of coronavirus as of Saturday night with 56 deaths after a 91-year-old woman passed away but the daily increase in new infections has dropped below 100 for the first time in three weeks.

The passengers pose one of the biggest threats in the country’s battle against the coronavirus and flattening the curve and infection rate with up to 70 per cent of those on board already testing positive to COVID-19.

The coming weeks will be critical to see whether the curve is really flattening or if this is just a mirage with a new wave of outbreaks to come.

A major operation involving dozens of officers from multiple government agencies will greet them when they step off the plane this morning.

‘We have reports that up to 70 per cent of these patients have tested positive for COVID-19. The government has been working very, very closely with the cruise ship operators to organise this flight to come back to Australia,’ Ms van Diemen said.

Passengers from the coronavirus riddled Greg Mortimer cruise ship are en-route to Australia after 70 per cent of them tested positive for coronavirus. Pictured at Montevideo’s international airport in Uruguay on Saturday

Photographs which emerged yesterday showed passengers celebrating as they boarded the plane at Montevideo’s international airport in Uruguay.

Unlike the passengers of the Ruby Princess – who were allowed to walk freely onto Australian shores without testing or imposed quarantine – medical staff will be checking all travellers from the Greg Mortimer before they leave the plane.

The passengers who pose a possible risk will be taken to hospital for further testing but even if they show no symptoms they will be forcibly isolated in hotels for a fortnight.

Passengers from New Zealand will be put onto a connecting flight where they will be flown home.

The ship’s operator Aurora Expeditions confirmed this week 128 of 217 people on board, nearly 60 per cent, had tested positive for the coronavirus but all were asymptomatic.

‘Our priority remains getting everyone on board disembarked as soon and as safely as possible,’ an Aurora Expeditions spokesman said in a statement.

‘It has been a very harrowing time for all involved.’ 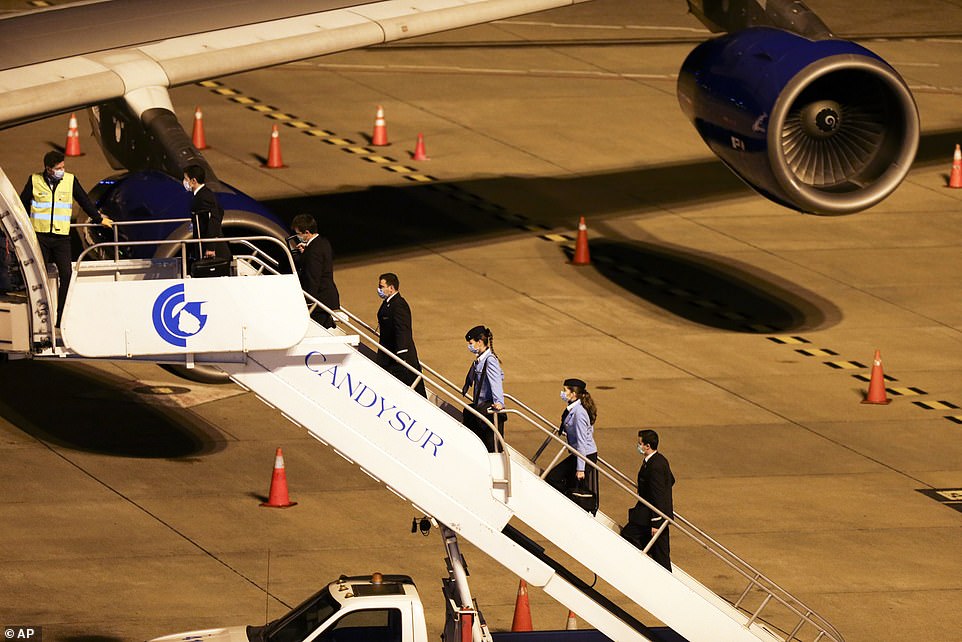 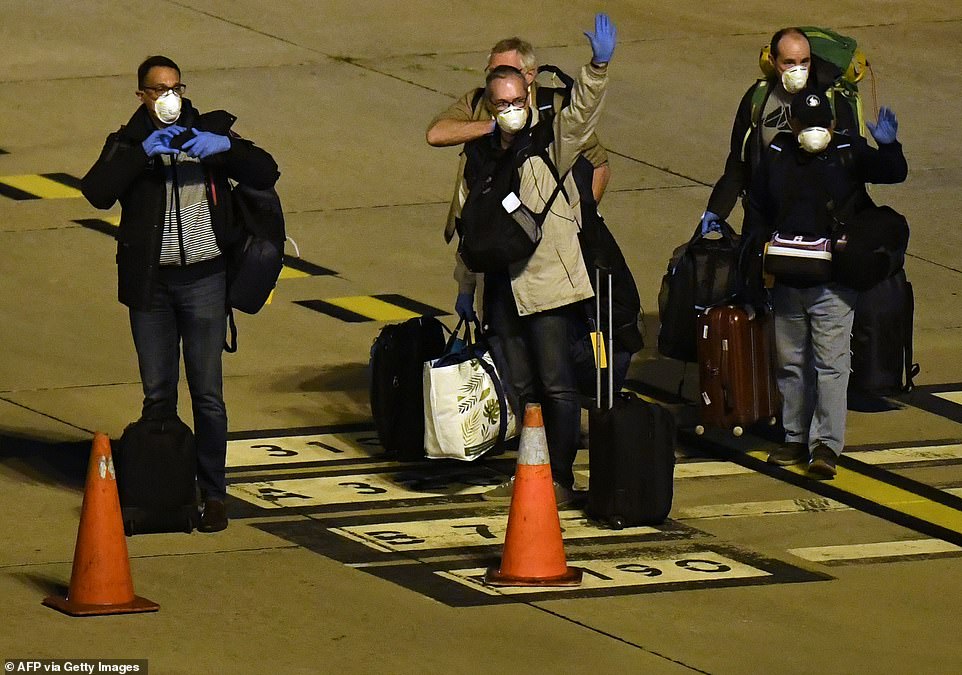 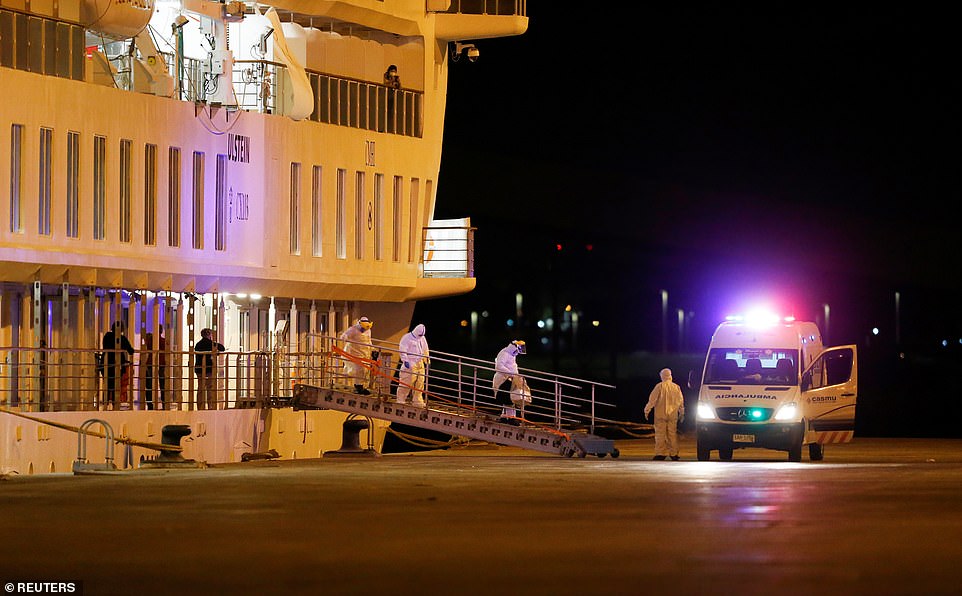 An ambulance waits by the Greg Mortimer cruise ship to take away sick passengers, including five Australians who have been hospitalised in Uruguay’s capital – Montevideo

However, the Foreign Affairs Department told AAP on Friday five Australians had been evacuated from the Greg Mortimer and hospitalised in Montevideo.

Uruguay had originally refused to let passengers off the cruise ship but later sent medical teams on board and monitored the situation via WhatsApp.

Most of the ill crew and passengers have mild symptoms and are stable, Uruguay public health ministry director-general Karina Rando said.

‘We have intensive care beds, doctors are available and we are not putting the care of our population at risk,’ Ms Rando told the Associated Press.

‘We have the logistical and professional capacity to serve these people.’ 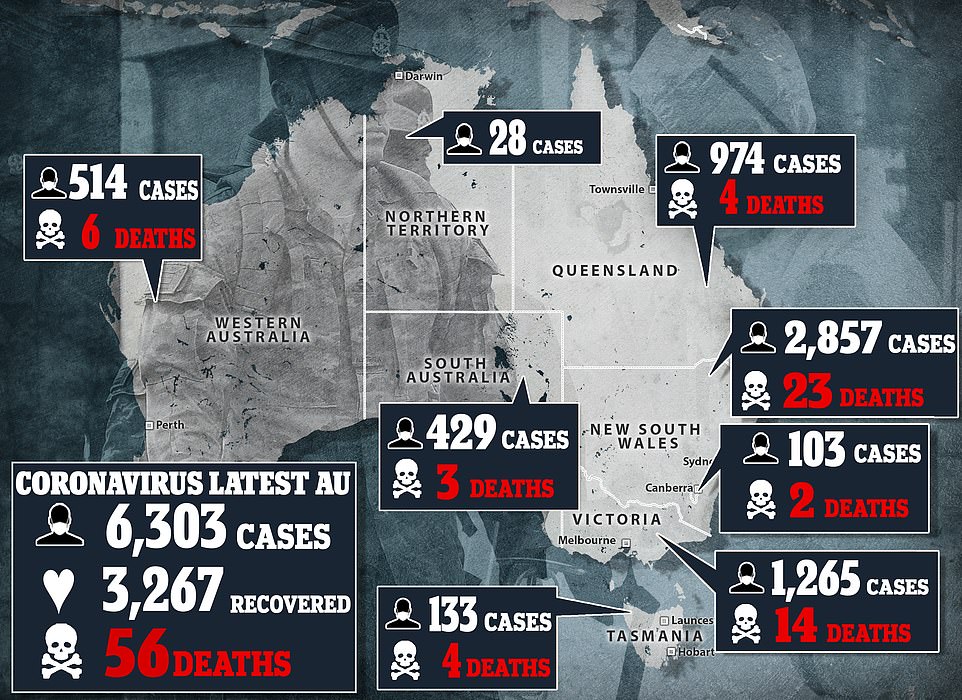 Australia has recorded 6,303 cases of coronavirus as of Saturday night with 56 deaths after a 91-year-old woman passed away 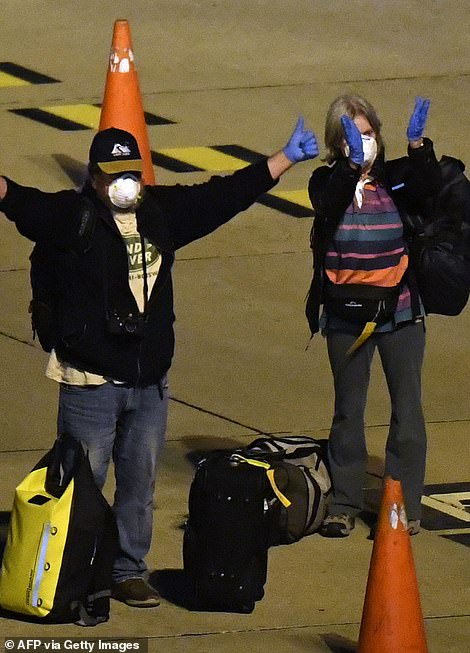 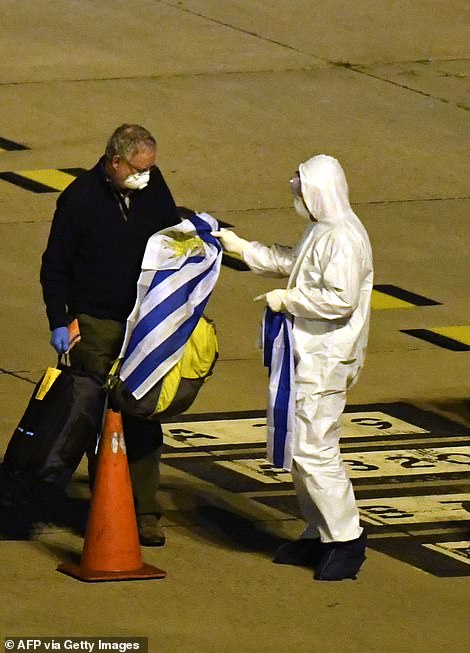 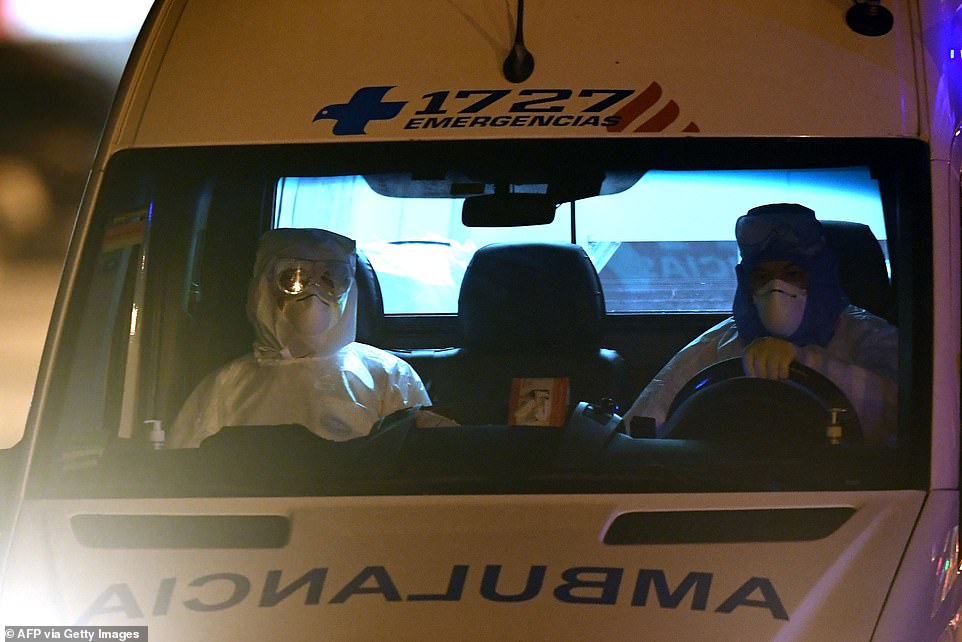 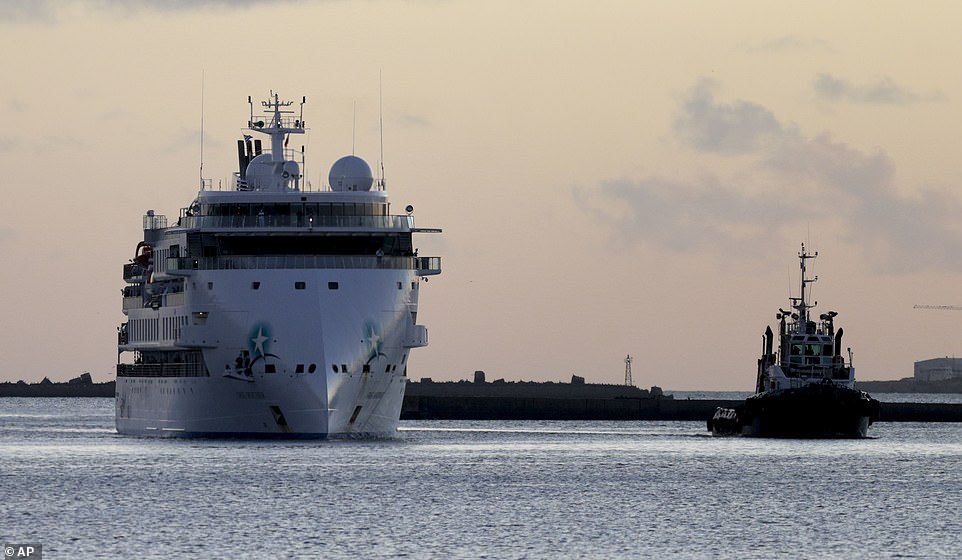 A sign hanging from a balcony on the ship said ‘Gracias Uruguay’.

The Greg Mortimer departed on March 15 on a voyage to Antarctica and South Georgia but has been docked off the coast of Montevideo since March 27.

The evacuated passengers, comprising 96 Australians and 16 New Zealanders, are being repatriated using a ‘humanitarian corridor’ with strict biosecurity measures. 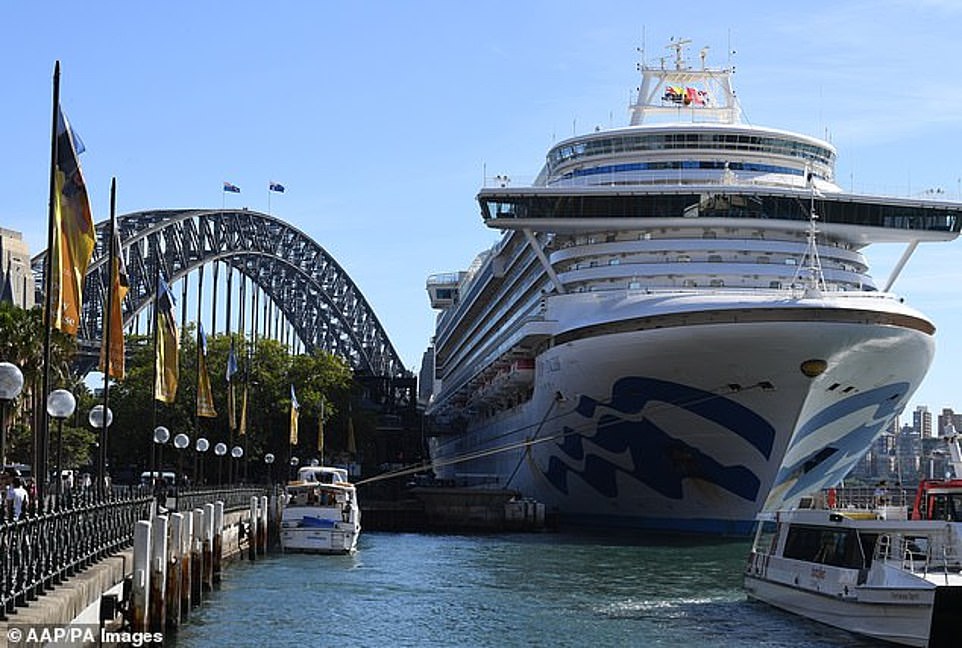 The Ruby Princess arrived in Sydney on March 19 and unloaded its over 2,700 guests without health checks before several passengers went onto test positive for coronavirus 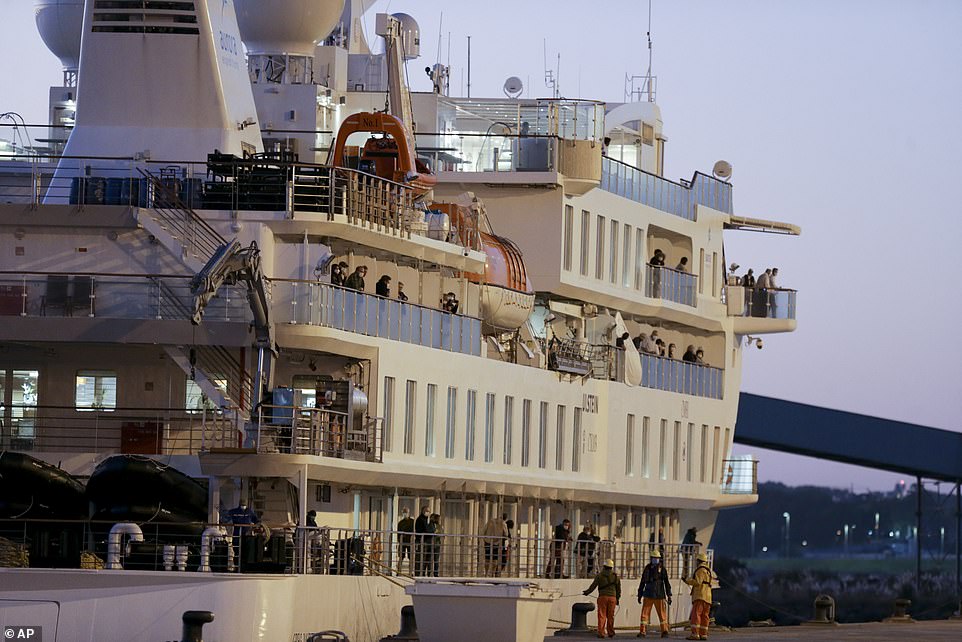 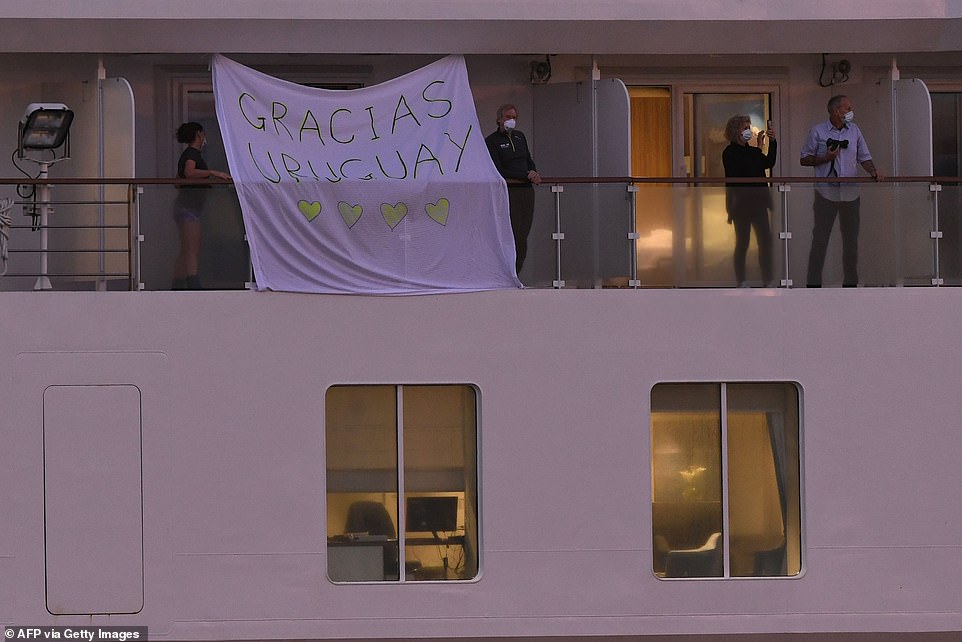 The passengers were driven in four buses to Montevideo’s Carrasco airport escorted by police and have their luggage disinfected prior to boarding.

A refitted plane operated by charter airline Hi Fly is flying them to Melbourne.

Medical personnel would also accompany them on the repatriation flight, with the company footing the bill for the journey under insurance.

‘The plane will be set up into risk zones, with passengers seated by test results and level of care required by the passenger,’ Aurora Expeditions said.

The NZ government plans to reach out to its citizens directly to organise a transfer upon arrival in Australia, Aurora Expeditions said.

More than 280,000 Australians have returned home in recent weeks, with about 6200 of them disembarking from 45 cruise ships around the world.

Many of them have gone on to test positive to the deadly coronavirus  with the Ruby Princess became the largest source of infections in Australia, with more than 600 cases and 15 deaths linked the to the cruise. 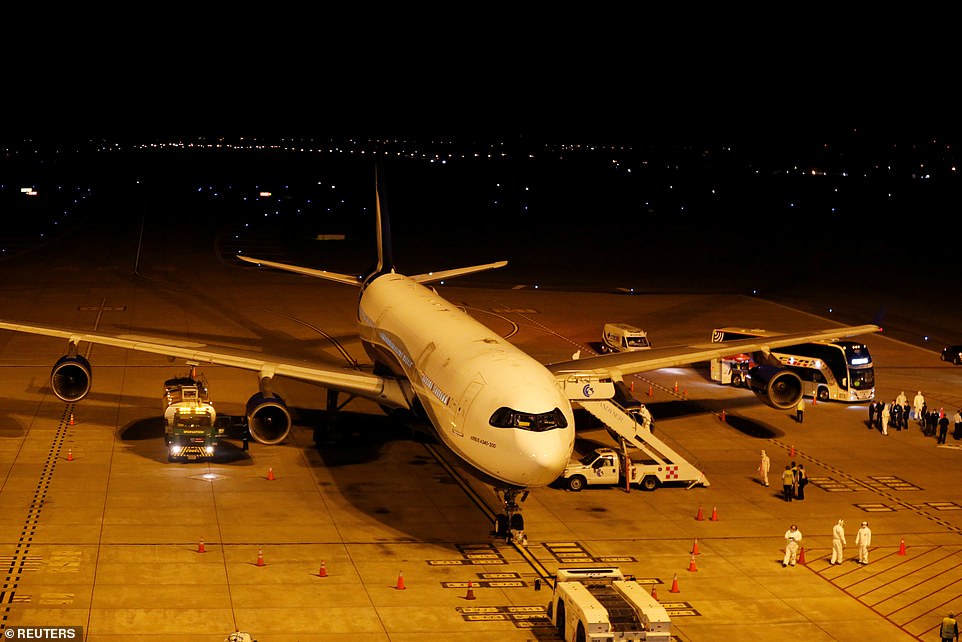 An Airbus A340 waits on the tarmac to conduct a repatriation flight. The flight will land in Melbourne on Sunday 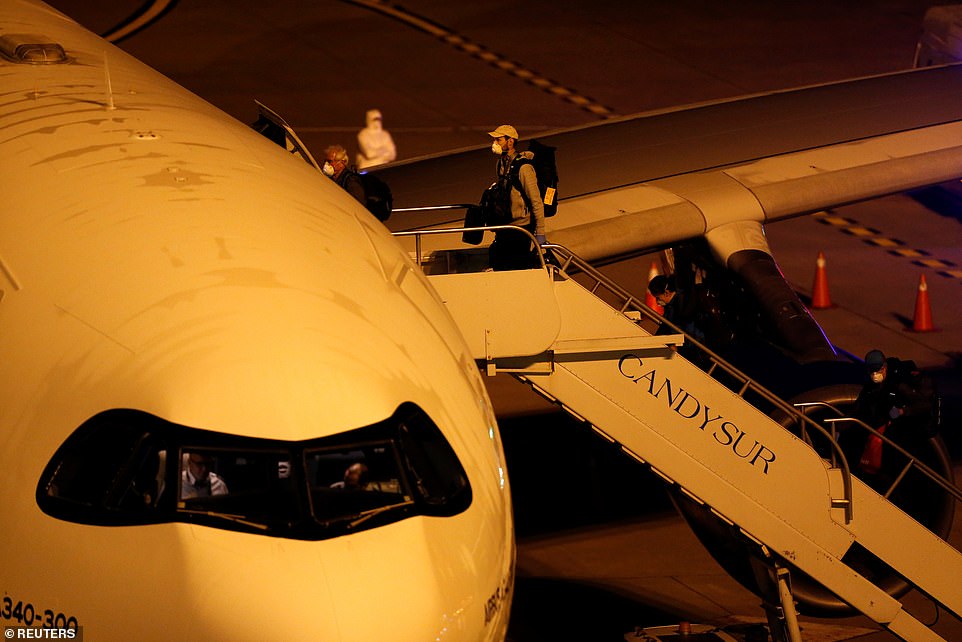 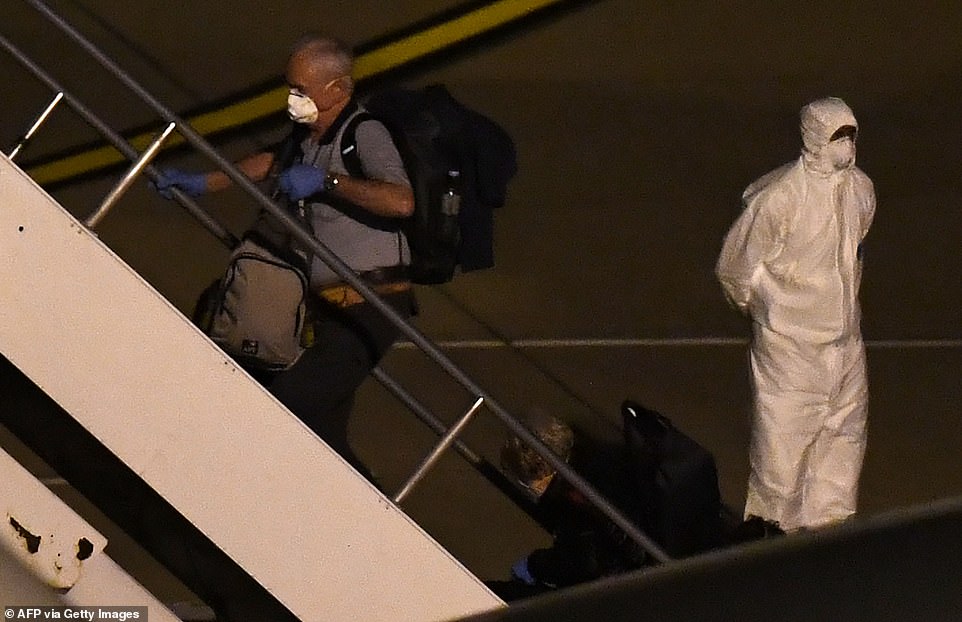 The ship docked in Sydney Harbour on March 19 and more than 2,600 passengers were allowed to disembark without adequate health checks.

The cruise – which is now docked at Port Kembla, south of Sydney – is under investigation by police.