A right-wing evangelical pastor has claimed the coronavirus is God’s ‘death angel’ and says parents ‘transgendering little children’ and ‘the filth on our TVs and our movies’ are to blame for the outbreak.

Christian Pastor Rick Wiles who is the creator of the TruNews streaming channel described China as having a ‘godless communist government,’ in an attempt to explain why the country had been hit so badly by the virus.

He noted, ‘plagues are one of the last steps of judgment’ and warned Americans to ‘get right with God.’

Pastor Rick Wiles says he believes the coronavirus was sent by God to purge sin. ‘My spirit bears witness that this is a genuine plague that’s coming upon the Earth. And God is about to purge a lot of sin off this planet,’ he said

‘Folks, the Death Angel may be moving right now across the planet,’ Wiles continued. ‘This is the time to get right with God.’

In comments that were first noted by Right Wing Watch, Wiles said that his ‘spirit bears witness that this is a genuine plague that is coming upon the Earth, and God is about to purge a lot of sin off this planet.’

The Pastor has previously called President Barack Obama a ‘demon from Hell’ and warned ‘there’s gonna be violence’ if President Donald Trump is removed from office.

In comments that have been described as anti-Semitic, he recently described President Trump’s impeachment as ‘a Jew coup’ planned by ‘a Jewish cabal’. 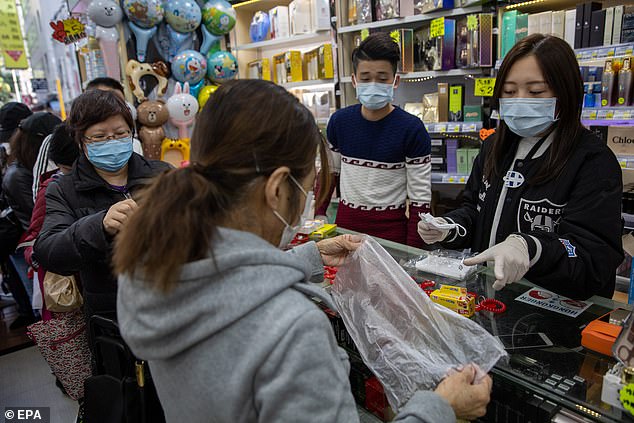 TruNews was founded by Wiles as an online radio program in 1999 called America’s Hope.

Wiles has a history of spreading conspiracy theories and warning of an imminent apocalypse.

Meanwhile, the deadly virus has seen more than 100 people die in China amid the outbreak of coronavirus, with the number of confirmed infections surging to more than 4,500.

The virus has spread across China and to at least 16 countries globally.

The new coronavirus is thought to have emerged from illegally traded wildlife at a seafood market in Wuhan.

On Tuesday, China agreed for WHO to send international experts to the country as soon as possible to help understand the virus and guide global response efforts.

Five people have been confirmed to have the virus in the United States. All of those infected had all recently returned from Wuhan.