A pastor has spent more than 18 years suffering from the pain and humiliation of a brain tumour which causes his chest to leak milk and has left him unable to have sex.

Pastor Francis Gichuru Gachieki, 52, from Nairobi in Kenya, has been suffering with the unusual problem since shortly after he was married in 2000.

Doctors have laughed at him, he has been judged by family and friends for being unable to have children, and he has spent over £9,000 trying to get help.

Medics were baffled by the preacher’s symptoms but he managed to get help after hearing someone discuss the condition on the radio in 2009.

Pastor Gichuru’s conditon, known as prolactinoma, is caused by a non-cancerous tumour in the pituitary gland in the brain, which controls hormones.

He has become obese and weak because of the hormonal problem and is trying to raise money for treatment, which is expected to cost another £10,000.

Pastor Francis Gichuru Gachieki, from Nairobi in Kenya, realised something was wrong when his breasts started leaking milk in 2000, shortly after he got married

Pastor Gichuru realised something was wrong when, after his wedding in 2000, he could not perform sexually.

He said he lost his sex drive and became unable to have sex at all – he says and his wife have now not made love for over 10 years.

And he soon noticed an ‘unusual liquid’ which was sticking to his shirt – which he assumed to be sweat.

But when he got home and told his wife, Merci Muthoni, 48, about the problem, she examined his chest and found milk oozed out of his breasts when she squeezed them.

Pastor Gichuru told local news site The Nairobian: ‘The problem began immediately after our wedding in 2000, then I could not perform to the maximum, but we could not figure out the root cause.

‘While coming out from a cyber café one day, I noticed an unusual liquid sticking on to my shirt but ignored it thinking it to be sweat and proceeded for my home.’ 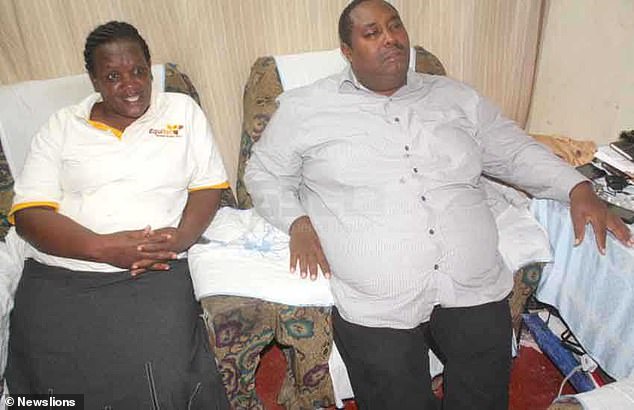 Because of his hormone condition, prolactinoma, Pastor Gichuru has not been able to have sex with his wife Merci Muthoni (pictured left) since they got married 18 years ago – the illness causes erectile dysfunction and a reduced libido

Pastor Gichuru visited a local clinic to try to get to the bottom of the problem, but was then referred to the larger Kenyatta National Hospital for tests.

He had to queue with women for tests on his breasts, and said both patients and staff would laugh at him.

‘The female patients would look at me and laugh as I queued with them on the same line,’ he said.

Prolactinoma is a tumour of the pituitary gland and is not cancerous.

The disorder interrupts the release of hormones.

Surgery is typically only offered if people suffer drug resistance or side effects.

‘More than three doctors conducted a test on me, it was then it took a toll on me. They would strip me naked while laughing and teasing me.

‘I started having headaches and suffered from poor eyesight apart from other severe conditions.’

Despite various tests, including studying his breast milk, doctors could not work out what was wrong with the religious leader, who is the founder of Christ Ambassadors Church International, in the Mowlem area of Nairobi.

In 2009, Pastor Gichuru heard people talking on the radio about a condition called prolactinoma, and realised that was what was wrong with him.

The condition is caused by a small benign tumour on the pituitary gland and can cause erectile dysfunction, enlarged breasts, infertility and headaches.

Its causes are unknown but are thought to include medications or thyroid problems.

Treatment can include hormone medication to counteract the symptoms, or surgery to remove the tumour.

Pastor Gichuru has faced embarrassment while trying to get treatment, but soon a doctor gave him pills which alleviated his condition for a time.

But by 2014 his condition had worsened and his doctor suggested he go to Singapore, India, the US or Israel for surgery. 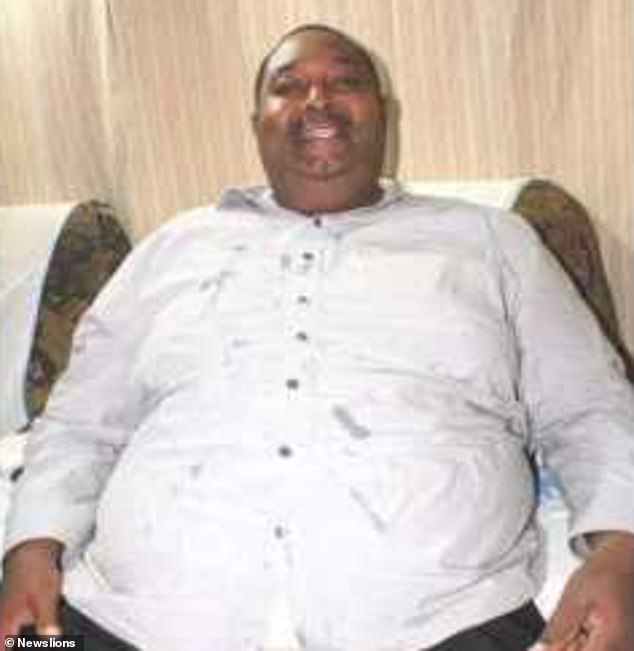 Pastor Gichuru has already spent around 1.3 million Kenyan shillings (£9,000) trying to get treatment for his condition, and he expects the surgery he needs to cost another £17,000

He said: ‘A female doctor described my condition on the radio and that it was treatable.

‘The doctors told me that the surgery was very important for me to restore my libido.’

He hopes to raise enough money to pay for corrective surgery and is hopeful God will one day free him of his condition.