Patagonia’s boss has revealed the company could stop advertising with Facebook ‘indefinitely’ if the platform fails to tackle a ‘rampant’ problem with hate speech, antisemitism and climate denialism.

Ryan Gellert, the outdoor clothing brand’s general manager in Europe, today said the tech giant’s business model was ‘flawed’ and had been profiting from hate speech and disinformation.

He told BBC Radio 4’s Today Programme: ‘They have ultimately got to develop a conscience and they have got to understand that their business model really needs to evolve.’

The company joined several US firms to halt advertising spending on Facebook last week over concerns the leading social network has fallen short in efforts to crack down on hateful posts.

Ryan Gellert (pictured at a panel discussion in May last year), Patagonia’s general manager in Europe, today said the tech giant’s business model was ‘flawed’ and had been profiting from hate speech and disinformation

Mr Gellert said the platform’s ‘accuracy on political and voting matters’ had to be ensured if Patagonia was to consider reinstating its advertising on Facebook.

‘They are not going to stop until they see this impact revenue. I think now more than ever they are endangering human health and weakening our democratic system,’ he said of the social media platform.

In a step further than other firms, who agreed to halt spending until the end of July, Mr Gellert revealed that without fundamental change, Patagonia would be suspending its advertising with Facebook ‘indefinitely’.

‘In the absence of really meaningful change I don’t see us returning at the end of July and that could go on indefinitely.’

He said ‘incremental change’ would not be enough, and suggested Facebook commit to a ‘regular third party independent audit’.

For now Patagonia will ‘diversify’ its spending on advertising.

Earlier this month Patagonia said on Twitter it was joining the Stop the Hate for Profit initiative unveiled by civil rights activists, who urged brands to boycott the social media giant claiming it ‘promotes hate, bigotry, racism, antisemitism and violence’. 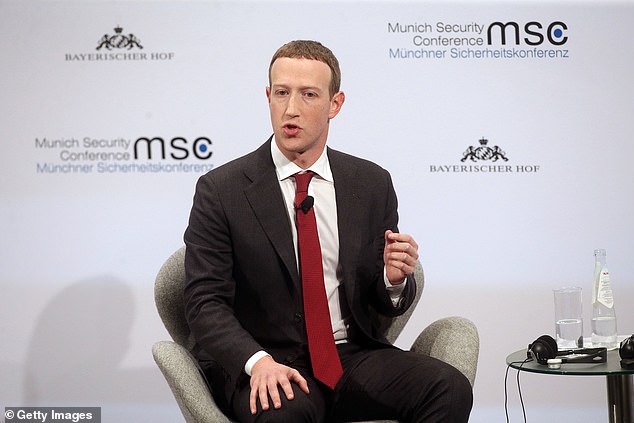 The company joined several US firms to halt advertising spending on Facebook (pictured, CEO Mark Zuckerberg in February) last week over concerns the leading social network has fallen short in efforts to crack down on hateful posts

‘We will pull all ads on Facebook and Instagram, effective immediately, through at least the end of July, pending meaningful action from the social media giant.’

‘For too long, Facebook has failed to take sufficient steps to stop the spread of hateful lies and dangerous propaganda on its platform,’ a statement from the company reads in part.

‘From secure elections to a global pandemic to racial justice, the stakes are too high to sit back and let the company continue to be complicit in spreading disinformation and fomenting fear and hatred.’

Patagonia has a history of not shying away from political discourse. The company sued President Donald Trump in 2017 after he rolled back protections on national monuments. 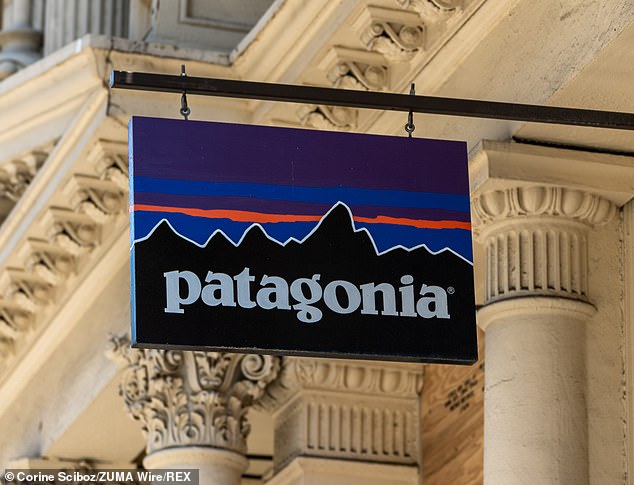 The #StopHateForProfit appeal was supported by the Anti-Defamation League (ADL), the National Association for the Advancement of Colored People, ColorOfChange, FreePress and the activist group Sleeping Giants.

North Face, also based in California, was the first to join the campaign, tweeting in response to a boycott call: ‘We’re in. We’re Out,’ adding later: ‘This includes all Facebook owned properties.’

The company subsequently shared a statement with CNN, which read: ‘The North Face is halting all activity and U.S. paid advertising with Facebook until stricter policies are put in place to stop racist, violent or hateful content and misinformation from circulating on the platform’.

CNN reports that the North Face’s parent company, VF Corp, has not yet stated whether other brands in its portfolio will also boycott the social media giant. 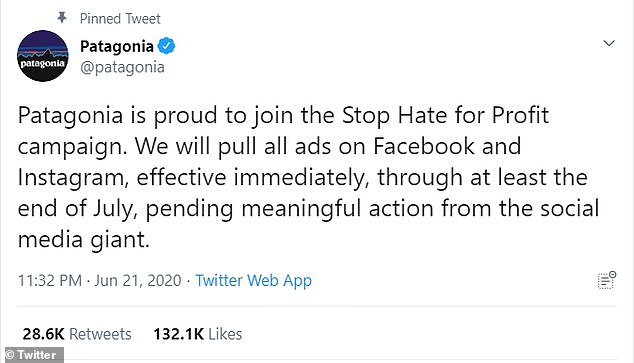 Upwork said it was ‘hitting pause on hate with no Facebook advertising in July.’

REI also joined over the weekend stating: ‘For 82 years, we have put people over profits. We’re pulling all Facebook/Instagram advertising for the month of July.’

‘Our conversations with marketers and civil rights organizations are about how, together, we can be a force for good,’ she continued.

The social network said it removed ads by Trump’s re-election campaign that contained a symbol used in Nazi Germany for political prisoners, a move welcomed by rights activists. 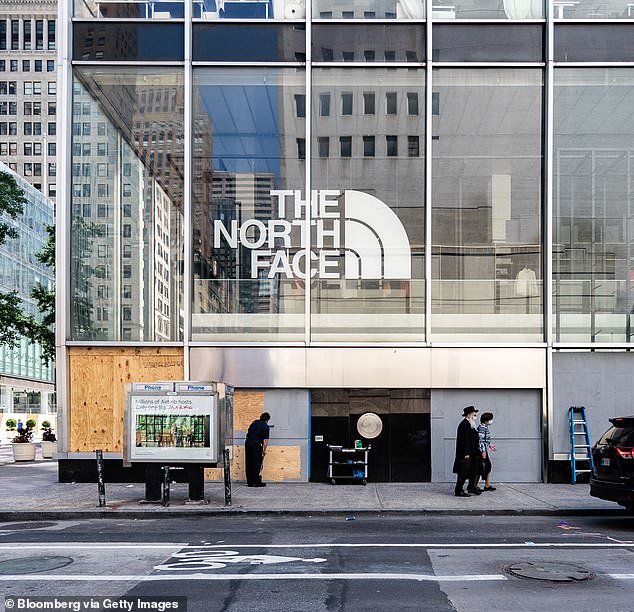 The North Face has become the first major brand to pull advertising from Facebook after civil rights groups urged companies to boycott the social media giant amid claims it ‘promotes hate, bigotry, racism, antisemitism and violence’

The campaign comes as the social media giant faces growing pressure over its hands-off approach to misinformation and inflammatory posts, including from US President Donald Trump.

‘It is clear that Facebook and its CEO, Mark Zuckerberg, are no longer simply negligent, but in fact, complacent in the spread of misinformation, despite the irreversible damage to our democracy,’ the NAACP said in a tweet.

The coalition criticized Zuckerberg’s decision late last month to leave up a particularly inflammatory post by the Commander-in-chief, which stated in part: ‘When the looting starts, the shooting starts’.

The Facebook co-founder then held a conference call with civil rights leaders who condemned him for failing to remove the post.

In a subsequent statement, Rashad Robinson of Color of Change, Vanita Gupta of the Leadership Conference and Sherrilyn Ifill of LDF said: ‘He [Zuckerberg] did not demonstrate understanding of historic or modern-day voter suppression and he refuses to acknowledge how Facebook is facilitating Trump’s call for violence against protesters. 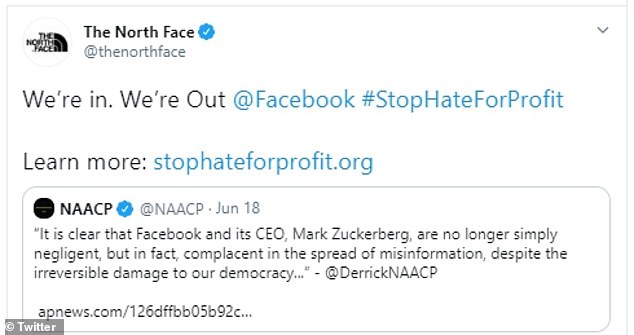 North Face, also based in California, was the first to join the campaign, tweeting in response to a boycott call: ‘We’re in. We’re Out,’ adding later: ‘This includes all Facebook owned properties’

‘Mark is setting a very dangerous precedent for other voices who would say similar harmful things on Facebook.’

Color of Change subsequently joined forces with a number of other civil rights group to launch the ‘#StopHateforProfit’ campaign last week, encouraging companies to pull ads from Facebook.

Other organizations in the campaign include the Anti-Defamation League, the NAACP, Sleeping Giants, Free Press and Common Sense.

The campaign took out a full page ad in the Los Angeles Times pushing for companies to boycott Facebook. The social media giant reportedly made close to $70 billion in ad revenues last year.

‘What would you do with $70billion?’ the #StopHateForProfit ad asks.

‘We know what Facebook did. They allowed incitement to violence against protesters fighting for racial justice in America in the wake of George Floyd, Breonna Taylor, Tony McDade, Ahmaud Arbery, Rayshard Brooks and so many others’.

The ad goes on to accuse Facebook of ‘turning a blind eye to voter suppression’ and ‘amplifying white supremacists’.

The groups took out a full page ad (pictured) in the Los Angeles Times that’s titled: ‘What would you do with $70billion?’

Other prominent voices have also hit out at Facebook over the last couple of weeks.

Among them, was Nancy Pelosi, who said companies could use their ‘tremendous leverage’ to ‘discourage platforms from amplifying dangerous and even life-threatening disinformation’.

‘I’ve seen a lot of insincere statements put out. Gonna say Mark Zuckerberg talking about how deeply saddened he was by the things he’s seen the president say is near that top of it considering that he makes billions of dollars off of spreading lies and letting people spread lies, hateful lies,’ he said.

Scarborough talked about the murder of federal officer Damon Gutzwiller, 38, who died in an ambush allegedly started by Air Force sergeant, Steve Carillo, 32, this month.

Authorities said Carillo scribbled far-right extremist phrases in blood after he killed a Gutzwiller and wounded two others.

Carillo is said to be a part of ‘boogaloo’, a movement of far-right anti-government extremists.

Facebook has been scrubbing ‘boogaloo’ and ‘Proud Boys’ Facebook pages. The company considers both to be hate groups. 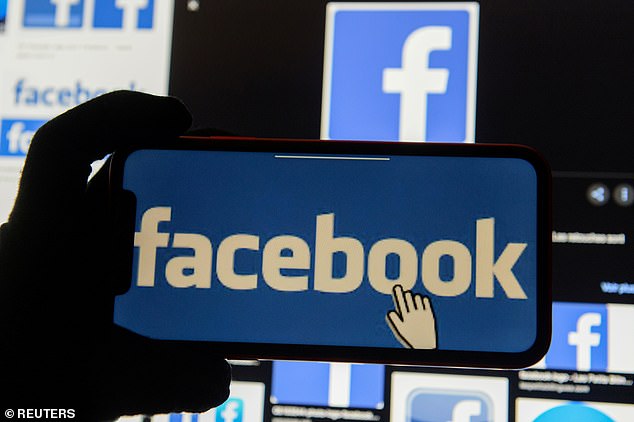 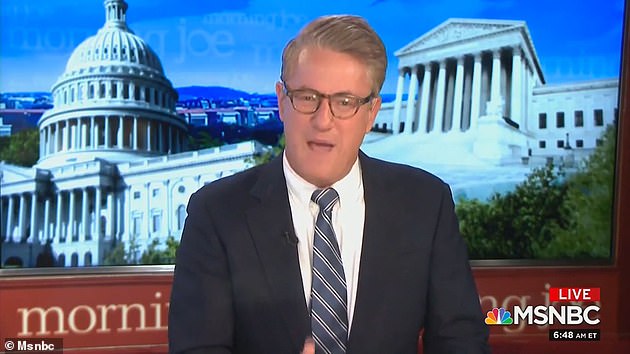 The company announced Tuesday that it recently took down 470 accounts belonging to people affiliated with the Proud Boys and another 430 linked to members of the American Guard.

‘In both cases, we saw accounts from both organizations discussing attending protests in various US states with plans to carry weapons but we did not find indications in their on-platform content they planned to actively commit violence,’ the company said.

Nearly 200 other accounts linked to the groups were removed late last month.

Facebook officials said they had been monitoring the groups’ social media presence and were led to act when they say posts attempting to exploit current George Floyd protests unfolding across the country.

Meanwhile, the company reacted to news of The North Face’s advertising boycott, stating: ‘We deeply respect any brand’s decision and remain focused on the important work of removing hate speech and providing critical voting information.

‘Our conversations with marketers and civil rights organizations are about how, together, we can be a force for good.’