Not the food you might think the fashion crowd is clamouring for, but if London’s new Prada-owned patisserie, Marchesi 1824, is anything to go by, fashionistas are embracing the epicurean — in a big, sugary, calorific way.

Food is most definitely in fashion. In fact, food has become the perfect vehicle for designers to amplify their brand’s ‘personality’ and lure in a new wave of social media-obsessed customers looking for something attractive — be it a fancy cake or a frock — to post online.

Like a lipstick or designer scent, food is a much more affordable way of buying into a brand. You might not be able to shell out hundreds on a handbag, but you can afford an eclair and get something beautiful to share on Instagram. Patisserie is the new perfume, a designer macaron the new make-up.

Like fashion, food is a status symbol. What you eat and where you eat it is a way of showing the world how refined and in-the-know you are. Designers aren’t just selling clothes any more, they’re selling a lifestyle.

Marchesi 1824 ticks all the boxes. Sip an Italian espresso with panettone, or a £6 sugar-encrusted bombolone (an Italian-filled doughnut) while lounging in one of its green velvet chairs.

There are touches of luxury — lobster benedict, Exmoor oysters — but you can also get a portion of £5 designer chips.

Further down Regent Street, there’s Ralph’s Coffee & Bar inside the Ralph Lauren store. It nods to the label’s polo player logo with an equestrian-themed decor, and serves a coffee blend roasted especially for the discerning taste buds of the designer himself.

So, is an eaterie now the must-have ‘accessory’ for luxury fashion retailers? ‘Partly, these food concepts are being introduced to diversify income strategy, as the clothes are not selling as well,’ says consumer and fashion psychologist Kate Nightingale. ‘It brings us into the brand’s physical locations and gets us to stay longer.’ 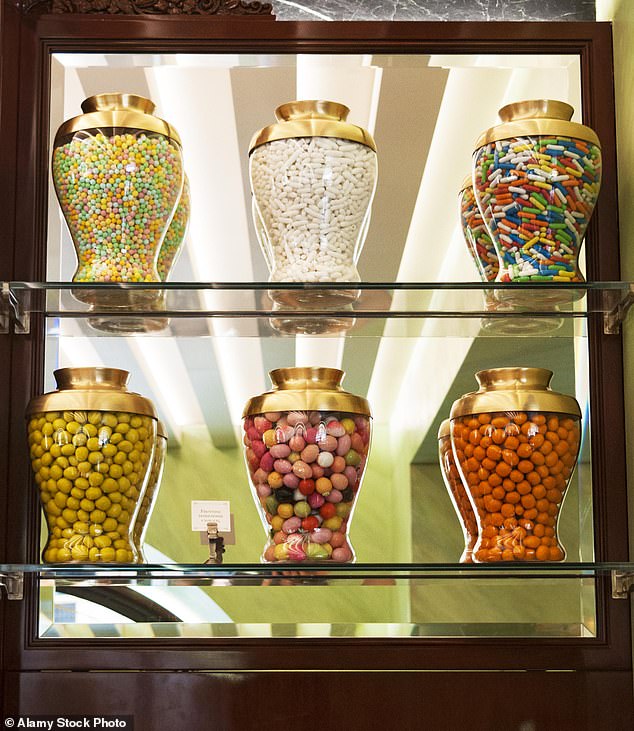 Designers aren’t just selling clothes any more, they’re selling a lifestyle by offering cafes to stop for a sweet treat. Pictured is the counter at the Pasticceria Marchesi inside the Prada boutique in the Galleria Vittorio Emanuele II in Italy

On the Champs Élysées in Paris, 86Champs is a collaborative concept store between French beauty label L’Occitane and luxury macaron brand Pierre Hermé.

The 10,000 sq ft space is a harmonious marriage of patisserie and perfumerie, with a dessert bar serving special macaron flavours that mirror L’Occitane’s natural ingredients, such as honey-mandarin and rhubarb-grapefruit.

Flipping the idea, there’s an exclusive fragrance range in-store, with scents inspired by delicious culinary combinations such as raspberry and matcha green tea, or fig and rose. The food dovetails with the brand’s story, so it’s more than just a gimmick.

Italy in particular leads the way in smart food-fashion fusion. In Milan, Prada’s trend-setting Bar Luce, has a Fifties aesthetic designed by filmmaker Wes Anderson (of The Royal Tenenbaums and The Grand Budapest Hotel fame) and serves up foie gras panini and dainty tarts.

Meanwhile, Dolce & Gabbana has collaborated with Martini on a string of bars with moody, all-black interiors in various chic Italian hotspots.

But the big question is: does the food actually taste any good? In some instances, yes, when fashion labels have reeled in big name chefs.

Last year, Armani/Ristorante, on the first floor of Emporio Armani’s store in the Parisian neighbourhood of St Germain, was awarded a Michelin star. Its seafood spaghetti may set you back £39, but at least you can trust it will be exquisite.

Surely hoping to clinch a star is Gucci, which unveiled Gucci Osteria last year, an emerald-green restaurant in Gucci Garden, its museum-meets-retail concept in Florence.

The fashion house has landed acclaimed chef Massimo Bottura of Osteria Francescana in Modena, Italy, which has three Michelin stars and was heralded the best restaurant in the world this year. Talk about upping the stakes.

Fashion’s fascination with food has also taken other culinary tangents. Dolce & Gabbana has collaborated with SMEG on limited-edition kitchen appliances, including show-stopping patterned fridges (which were on sale at Harrods for an eye-watering £36,000).

Mere mortals can order a D&G designed SMEG kettle for £499.95 from John Lewis, or a Versace serving plate for £193, or a Missoni salad bowl in its signature zigzag print for £166 (both amara.com).

Bringing the food/fashion love-in full circle, is a kitschy micro-trend for novelty fashion accessories that resemble food. Gucci’s strawberry pendant earrings (£450, gucci.com) glint with red crystals, while Indian jewellery designer Ranjana Khan (a favourite of Michelle Obama’s) has a whole range of playful, fruit-inspired earrings, including a pair of dangly velvet cherries (£176) and two mini bunches of grapes (£290, both net-a-porter.com).

All a bit too healthy for you? A sparkling Judith Leiber clutch (dubbed the Faberge of handbags, they regularly crop up on the red carpet) is the way to go. Try her gummy bear pill-box (£660). Or a crystal-encrusted watermelon ice lolly clutch — at £4,299, a little dearer than your average Fab (both Harrods).

That’s where fashion’s new-found love of food really works; a dazzling fine-dining experience might be ‘on brand’, but when it inspires something a little more knowing and humorous — even frivolous — it’s far more fun. Bon appetit.