Patricia Arquette wore a gown and clutch designed by Oxycontin heiress Joss Sackler to the Emmys, ‘days after family that fueled opioid crisis refused to pay settlements out of pocket and hid away $1B’

The always outspoken Patricia Arquette has gone radio silent about her decision to showcase a Purdue Pharma heiress’ designs at the Emmy Awards on Sunday night.

The actress, who made an impassioned plea for transgender equality and rights when collecting her award for Best Supporting Actress in a Miniseries or TV Movie, walked the red carpet on Sunday in a dress designed by LBV while also carrying one of the brand’s metal clutches.

LBV is run by Joss Sackler, who married into the Purdue Pharma billions.

Just last week, her family scoffed at the notion of paying settlements relates to the opioid crisis out of pocket and were discovered to have hidden away a billion dollars.

That made it all the more startling to see her designs in Arquette, who is one the most socially conscious people in Hollywood.

She is also someone has witnessed the destruction that is caused by addiction firsthand, with close friends and family members having struggled with substance abuse in the past.

Vogue had no problem with this at all however, and named her to their Best Dressed List.

Faux pas: Patricia Arquette attended the Emmy Awards in a dress designed by LBV while also carrying one of the brand’s metal clutches 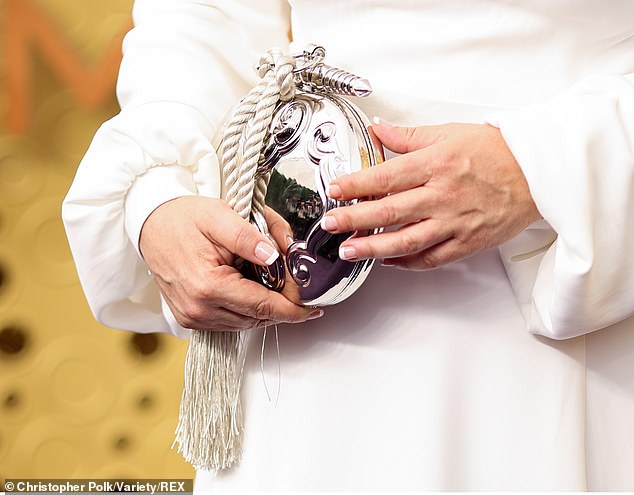 In her silence, one woman was quick to jump to her defense.

Courtney Love, who revealed earlier this month she was offered a six-figure check to attend the brand’s show, spoke out about Arquette’s fashion faux pas on social media.

In Instagram posts shared by Love on Tuesday, she also suggested that someone was making a profit from this – but clear that it was not Arquette.

‘Ugh . So sad. Wiping out the values of a great woman with one sneaky a**ed bunch of money to [PR firm]@tukeconsulting [Arquette’s stylist] @annabelleharronetc or influence peddling, or whatever it was . Disgusting.

DailyMail.com did reach to to reps for Harron and Arquette, but they did not respond to requests for comment.

Sackler was delighted by the fact that Arquette won on Sunday night, and praised the actress on social media.

She also plugged the clutch but not the dress, which is not available for sale at this time, and will likely have a hard time finding its way into any retail stores.

‘These are the women that I seek to emulate, they are my role models and my heroes. They are the trailblazers that I tell my daughter about at night, when the moon is out and it’s time to dream. Congratulations,’ she wrote on Instagram.

Sackler is no stranger to bad press, and earlier this year spent most of her interview with Town & Country bemoaning a previous piece that had ruin in The New York Times.

‘I knew something was up, because the paper would not refer to me as Dr. Joss Sackler,’ she declared at one point.

‘I told them I have a PhD in linguistics.’