Scotland youth team rugby player, 21, secretly filmed himself having sex with woman at a Holiday Inn, then shared the video with his 28 teammates on WhatsApp

By Alexander Lawrie For The Scottish Daily Mail

Patrick Dewhirst, pictured outside Edinburgh Sheriff Court, is now a registered sex offender after he secretly filmed himself having sex with a woman in a hotel room

A rising Scotland rugby star recorded a sexual encounter with a woman in an Edinburgh hotel – then posted the footage on social media for the rest of the squad to watch.

Patrick Dewhirst filmed himself having sex with the woman without her knowledge at a Holiday Inn in the city’s Corstorphine district.

The Scotland U20 player then distributed the video clip to a WhatsApp group containing 28 members of the Scotland squad.

The incident took place the night before Dewhirst and his teammates headed to France to compete in last year’s World Rugby U20 Championship.

His promising career as a Scottish Rugby modern apprentice is now in doubt after he was placed on the sex offenders’ register at Edinburgh Sheriff Court yesterday.

The 21-year-old utility back, who plays for Scottish Premiership champions Ayr RFC, had previously pleaded guilty to recording himself having sex with the woman without her knowledge or consent on May 23 last year.

He also admitted distributing the images to a WhatsApp group containing 28 members from an address in Ayr between May 23 and September 8.

Sheriff Peter McCormack told the disgraced sportsman his actions had been ‘complete idiocy’ for ‘cheap laughs with your teammates’.

He added: ‘You are a rugby player who had the ability and the good fortune to be selected for the Scotland U20 team in the World Cup in France last year. On the eve of the squad’s departure, you and a female ended up in your room and sexual activity took place which should have been no one’s business but yours and hers.

‘But without her knowledge or consent and while she was lying prone you made a video of the sexual conduct on your phone and then posted it to all 28 members of the squad on WhatsApp.’

Dewhirst, of Mauchline, Ayrshire, was told he would be on the sex offenders’ register for the next five years.

He was also ordered to carry out 140 hours of unpaid work in the community over the next six months and placed on a restriction of liberty order, which means he must stay in his home between 8pm and 6am for the next 120 days.

Sheriff McCormack said: ‘This could well ruin your sporting career and we can only hope this young woman recovers from her ordeal.’

Defence solicitor Peter Lockhart told the court that Dewhirst had been offered a professional contract in the French city of Lyon but that the move is now on hold due to his conviction. 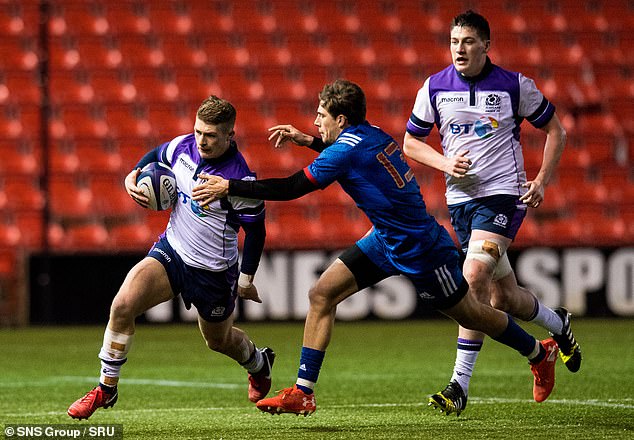 The 21-year-old utility back, who plays for Scottish Premiership champions Ayr RFC, had previously pleaded guilty to recording himself having sex with the woman

Mr Lockhart said his client was ‘a very gifted and dedicated player’ and had been suspended by the SRU following the disclosures.

Previously, the court had heard that Dewhirst and the woman knew each other and she went to his room at the Holiday Inn around 7.30pm on the night in question.

The pair were involved in consensual sexual activity in the room, but Dewhirst began filming their encounter without the woman’s knowledge.

The woman, who cannot be identified for legal reasons, became aware that the footage existed and had been shared among the men, and called in the police.

Following the incident, Dewhirst attempted to contact the woman but she refused to speak to him or accept any apology.

Dewhirst first came to prominence playing for local side Cumnock before moving to Ayr RFC.

He was voted the 2nd XV’s Players’ Player of the Year in 2016 and went on to gain international honours by playing for Scotland at U19 and U20 level.

He started for Scotland against Wales and France in the junior version of the Six Nations competition last year.

Dewhirst then starred for his country at the World Rugby U20 Championship 2018, held in France, where he scored a try in a last-minute defeat against Italy.

‘We took it extremely seriously and undertook immediate action in collaboration with Police Scotland. The case was passed on to Police Scotland for investigation, which we fully supported.’