Patrick Frazee beat his fiancee so hard with a baseball bat that he dislodged her teeth from her skull according to the Application and Affidavit for Arrest Warrant that was released to the public on Wednesday.

That filing was obtained by DailyMail.com, and confirms many of the events that were detailed during the preliminary hearing one day prior.

It also states that Frazee left the murder scene untouched for two days, refusing to clean the blood from Kelsey Berreth’s home and instead making his mistress Krystal Lee Kenney scrub the floors and search for the young mother’s missing teeth.

After Krystal was finished, she and Frazee watched Berreth’s body burn together on his farm according to the court filing.

That filing also reveals that Frazee and Berreth’s 14-month-old daughter was in her playpen in the next room while her father allegedly killed her mother.

A judge on Tuesday ruled that Frazee would stand trial for the murder of Berreth, and he is set to be formally be arraigned on April 8 as he now faces eight charges in total.

Accused: The Application and Affidavit for Arrest Warrant in the Patrick Frazee case has been made public for the first time (Frazee above on Tuesday) 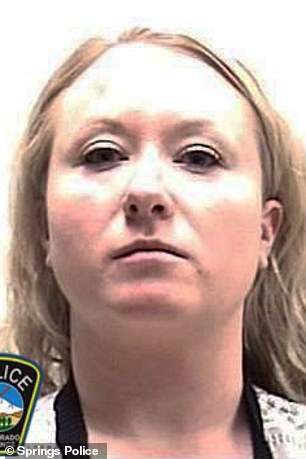 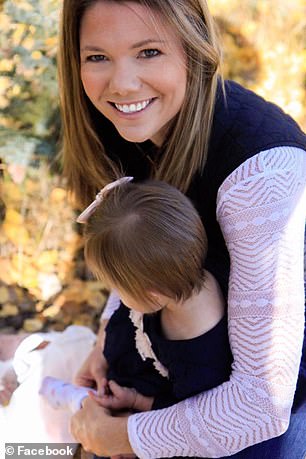 Clean up: He made his mistress Krystal Lee Kenney (left) search for Kelsey Berreth’s (right) teeth after he dislodged them from her head while beating her to death states the filing

Commander Chris Adams of the Woodland Park Police Department wrote in the affidavit that Frazee’s mistress Krystal Lee Kenney provided details of the crime after she was approached by agents from both the Federal and Colorado Bureau of Investigations.

‘Frazee used a baseball bat to kill Berreth in the living room of [her] residence on November 22nd of November, 2018,’ states the filing.

‘Frazee had tied something around Berreth’s eyes, and was having her guess the scents of different candles.

‘While she was blindfolded and distracted, he hit her with the bat, causing her death.’

It goes on to state: ‘Frazee was concerned he left a tooth behind in the residence, because when he hit her in the face with the bat, it presumably caused several of her teeth to be dislodged.’

Krystal told police that she later found the tooth and disposed of it while cleaning the crime scene.

In the two days between Frazee killing Berreth and burning her remains, he had been keeping the body in a black tote hidden away on the Nash Ranch according to Krystal.

Gregg Slater testified in court on Tuesday that Frazee killed Berreth on Thanksgiving and then called his mistress Krystal Lee Kenney, telling her that ‘she had a mess to clean up’.

Krystal then drove 13 hours overnight from Idaho to Colorado, where she cleaned Berreth’s blood-soaked house for four hours, it is claimed.

Frazee meanwhile left the murder scene to have Thanksgiving dinner with his family and then allegedly returned to collect Berreth’s body and burn it on a pile of haystacks at a nearby farm said Slater.

Prior to that, Frazee had asked Krystal to kill Berreth four times, and she almost carried out those orders on two occasions, said Slater.

The first time was in September, when she befriended Berreth by pretending to be a neighbor and then gave the woman a drug-laced beverage from Starbucks, it is claimed.

Frazee then asked her to bludgeon Berreth with a bat and beat her to death with a pipe, which Krystal told agents she almost did, backing out when she arrived at Berreth’s home and saw she was not alone, the court heard.

Krystal had been in Reno on the fourth occasion and could not book a ticket to fly in to Colorado, said Slater.

Slater said that the mistress did all this because she feared for her life and the lives of her two children.

Krystal did not carry out Frazee’s final order either, according to Slater, opting to leave two patches of blood as evidence in the house for authorities to find when they searched for evidence.

She then went to eat at a nearby Sonic. 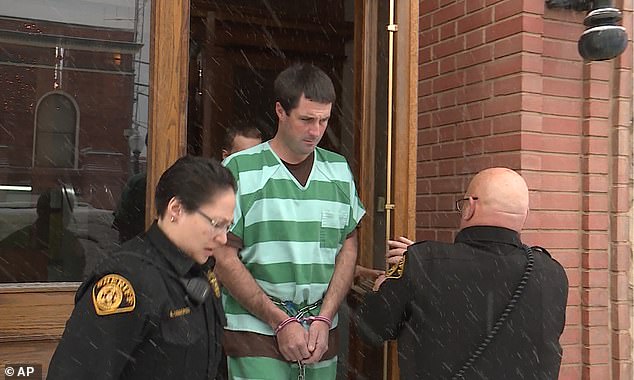 Murder: Patrick Frazee (above in December) killed Kelsey Berreth by saying he wanted her to guess the scent of a mystery candle, blindfolding her and then beating her to death, said an agent 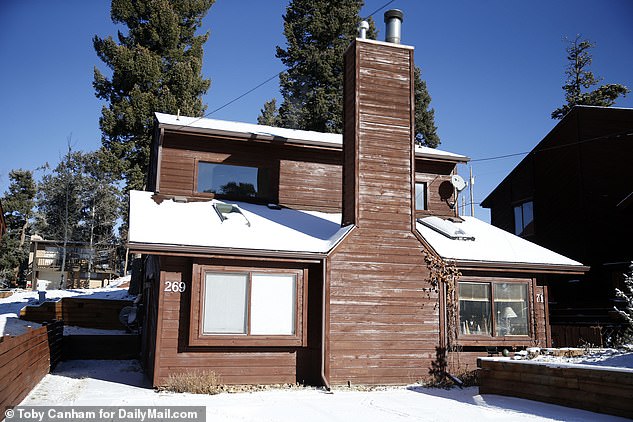 Scene: Video played in court on Tuesday shows him entering Kelsey Berreth’s home (above) by himself on the day she went missing 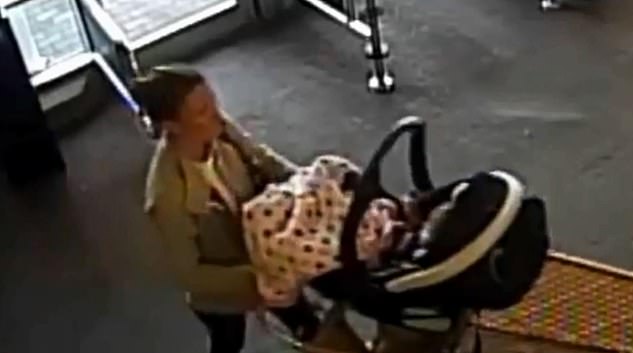 Last seen: He then called her phone for three days, which pinged in the same exact location as his own, according to police (Berreth above in surveillance footage on day she went missing)

Frazee was also hit with three additional charges for the alleged murder of Berreth – one for tampering with evidence and two for a crime of violence – bringing his total count now to eight.

Prosecutors started off the day by showing video of Frazee leaving Berreth’s house at 1:30pm with their daughter and then returning alone at 3:30pm on the day she went missing.

That video was taken from a neighbor’s surveillance camera.

He would later tell authorities he and Berreth had split up, claiming she texted him on November 25 and said: ‘Do you even love me?’

That text was sent by Krystal.

The head of the Woodland Park Police testified on Tuesday that when Frazee called Berreth’s phone the day after she went missing, both cells pinged at the same exact spot.

That continued until November 25, at which point the cell began to move westward towards Idaho, at the same time Krystal took the cell to dispose of the evidence.

Slater said Krystal told agents she had purposely pinged towers along the way by turning on the cell from time-to-time.

She also said that she had disposed of Berreth’s gun by giving it to a friend, and tried to avoid detection by driving a friend’s car during the trip.

Frazee had wanted to give the appearance that Berreth had killed herself, according to Krystal.

Authorities got their big break when Krystal took authorities to the location that Frazee allegedly burned the evidence, where they found a burn mark and traces of accelerant.

Slater also said that Frazee and Krystal had been in a relationship since March of last year, confirming the story that DailyMail.com broke last month.

Krystal was not aware that Frazee had a fiancee or a daughter however until July.

Slater also testified that Krystal was told by Frazee that Berreth was a drug addict and abused their daughter.

The day kicked off with prosecutors calling Frazee’s mother Sheila to the stand as a surprise witness.

Lawyer Dan May said that Sheila knew where Kaylee was at the time of her mother’s murder and had information about someone arriving at the house on Thanksgiving since she lives with her son.

Sheila pleaded the Fifth however, and after doing so the judge sided with her attorney and said she did not have to testify, excusing her from the court proceedings.

It was also revealed later in the day that Frazee is estranged from his older brother.

Frazee’s mother is not completely off the hook however, and could still be called to testify if the judge changes his mind and sides with the prosecution later Tuesday or Wednesday. 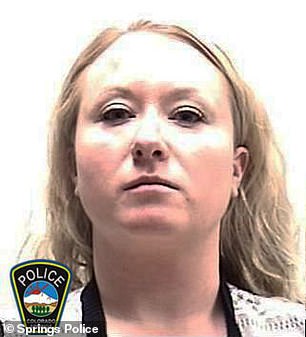 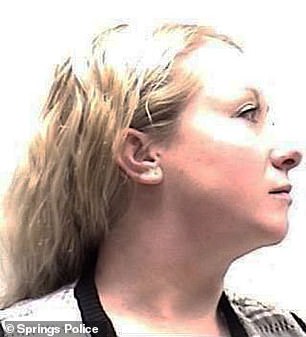 Scared: She also noted that Krystal had once said ‘that she’s never seen that kind of evil in anybody’ when speaking about Frazee (mugshots above) 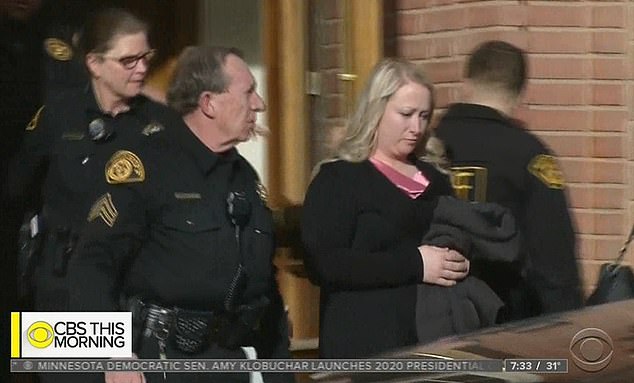 Target: A close friend of Krystal’s was then asked if Krystal feared that Frazee might murder her next, to which she replied: ‘Yes, that’s what I believe, yes’ (Krystal leaving court on Friday)

A close friend of Krystal’s said last week that she only disposed of Berreth’s cell phone because she feared for her life.

‘She had very, very good reasoning for whatever it is she may or may not have done,’ said a very emotional Michelle Stein on CBS This Morning.

When pressed for further detail she added: ‘I can’t really comment completely, but fear. And legitimate fear.’

Stein was then asked if Krystal feared that Frazee might murder her next, to which she replied: ‘Yes, that’s what I believe, yes.’

Stein also explained why Krystal would have helped Frazee if this was the case, saying that he was a ‘dangerous person’.

When asked if Krystal had ever stated that she was fearful of Frazee, Stein replied: ‘She did tell me that she’s never seen that kind of evil in anybody.’

That is why she agreed to not only dispose of Berreth’s phone, but also make texts to her employer and Frazee from the cell. 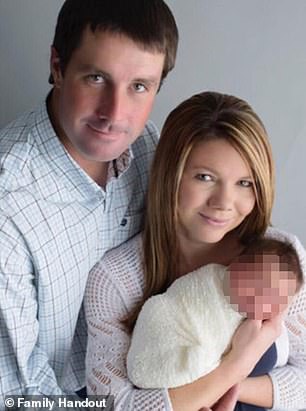 Victim: It was also revealed that Krystal did not know that Frazee was engaged or had a child until very recently, according to Stein

‘I will just tell you Krystal was very, very scared,’ said Stein.

‘Krystal is a level headed, kind, fun-loving, happy-go-lucky person. She’s a tough cowgirl. She was absolutely scared and extremely upset.’

At this point in the interview Stein begn to cry a bit while thinking about her friend.

‘She had very, very good reasoning for whatever it is she may or may not have done,’ said Stein.

One thing she did not do however was participate in the actual murder.

‘I have absolutely no doubt whatsoever,’ said Stein on that subject.

Stein was not asked and did not address, however, when Krystal learned about the planned murder, with court documents suggesting it may have been as early as September.

Krystal broke down in tears as she confessed to destroying Berreth’s cell phone after learning that the young mother, 29, had been murdered.

While agreeing to testify against Frazee at his murder trial, the former nurse, 32, told the judge that she learned about the homicide on November 22.

She will be sentenced after Frazee’s trial for her own involvement after pleading guilty to one felony count of tampering with evidence.

Krystal did not provide any additional information as to how she destroyed the cell phone while in court.

‘I learned that Patrick Frazee has committed a homicide on approximately Nov. 22, 2018 in Teller County. I knew that law enforcement would be investigating that crime,’ said Krystal on Friday, reading from a prepared statement.

Berreth’s body has still not been found.