Patrik Gunar, 22, mugged a 12-year-old girl for her iPhone 6 has been sentenced to three years in prison

A man who mugged a 12-year-old girl in the street has been jailed for three years and she has thanked well-wishers for ‘heart-warming comments’ that have ‘boosted her self-confidence’.

Patrik Gunar, 22, dragged the child to the floor and stole her phone in a struggle lasting two minutes.

The girl is said to be too afraid to go outside for even a few minutes ‘in case they were going to get her again’.

Gunar, originally from Slovakia, cried as he admitted his crime at Derby Crown Court today and said he’d picked the 12-year-old because she was ‘easy prey’ and ‘just a little girl’.

Derbyshire Police released shocking CCTV footage of the girl bravely trying to fend off her attacker, before he fled with her iPhone 6 on February 18.

The force thanked a number of celebrities, including Piers Morgan, Nick Knowles, Michael Vaughan and Gaby Roslin, for retweeting their appeal after the incident.

The 22-year-old sobbed throughout the hearing as the judge commented on the ‘preposterous’ stories he had claimed were the reasons for committing the offence.

The schoolgirl fought against Gunar for 25 seconds in Cambridge Street, Derby, as she was on her way home from buying some cauliflower for her mother in what was described as a ‘sustained’ attack.

Appearing at Derby Crown Court today, Gunar who now lives in Derby, pleaded guilty to a single charge of robbery as his family watched on from the public gallery.

Judge Nirmal Shant QC told Gunar: ‘I have seen CCTV footage of what you did… on that day and what you did was walk past a 12-year-old complainant, decided she was easy prey and chose her deliberately because of her age and vulnerability.

‘What can be seen on screen is that you were determined to get it off her despite her best efforts to stop you from doing so.

‘You held onto that phone while you ragged her about on the floor. She continued bravely to hold onto her phone but you carried on.’

The judge added: ‘You made up a preposterous story to explain your involvement in this saying that you had been effectively held at gunpoint or injected with drugs to perform this robbery.

‘You deliberately targeted a 12-year-old – taking the view no doubt that you could easily take the phone from her.’

Opening the case against Gunar, prosecutor Mark Watson said: ‘He knows she is there because he turns quickly, decidedly walks to her and goes straight for her pocket in which her iPhone 6 was.

‘To her enormous credit, she tried to hold on to it. As a result she is ragged about, firstly on her feet and then on the floor. 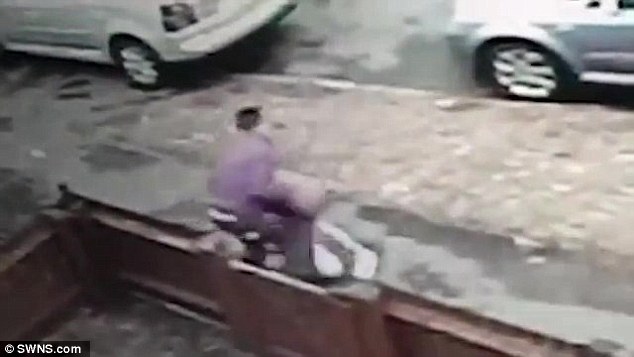 Harrowing CCTV footage captured the yob, wearing a purple-coloured tracksuit, walking down the street before suddenly turning back and grabbing the youngster 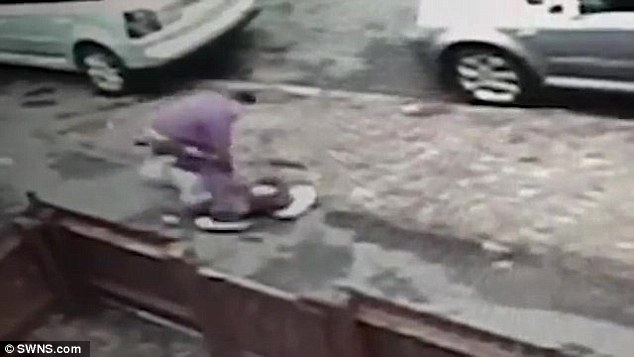 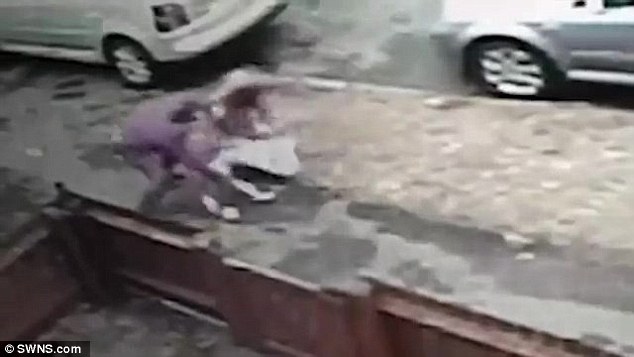 The girl, 12, who was wearing duffle coat with the hood up, bravely fought back but the thug managed to overpower her before he calmly walked away

‘Even when they fall to the ground he continues to forcibly pull at the phone in her pocket and this lasts about 30 seconds.’

Mr Watson said the victim had screamed throughout and at some point, common sense kicked in because she was worried the defendant had a knife.

In a victim personal statement which Mr Watson summarised to the court, the girl described how she is now too afraid to go outside for even a few minutes ‘in case they were going to get her again’.

Daniel Church, defending, said: ‘He has shown some evidence of remorse in this case. I accept from the outset that this act is utterly despicable.’

He added that Gunar was ‘ashamed’ of his behaviour and that he had made no attempt to conceal his identity from police.

Police Staff Investigator Lindsey Scribbins, of Derbyshire Police, said after the case: ‘This was a very shocking incident which left the young victim badly shaken and distressed. 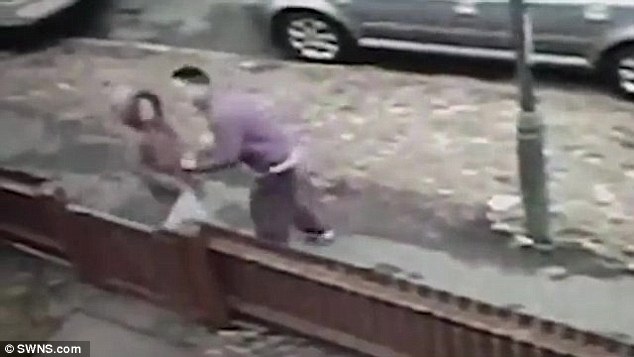 Gunar, originally from Slovakia, cried as he admitted his crime at Derby Crown Court today and said he’d picked the 12-year-old because she was ‘easy prey’ and ‘just a little girl’

‘The mass public reaction when we released the CCTV appeal was testament to the horrific nature of this crime, which is reflected in the sentence passed today.’

In a statement issued by the force, the 12-year-old victim added: ‘I would like to thank the public for all the support I have received.

‘The heart-warming comments mean a great deal to me and my family.

‘The public reaction really raised my self-confidence after I initially felt very low following the incident.

‘I would also like to offer big thanks to the police for their hard and fast work. 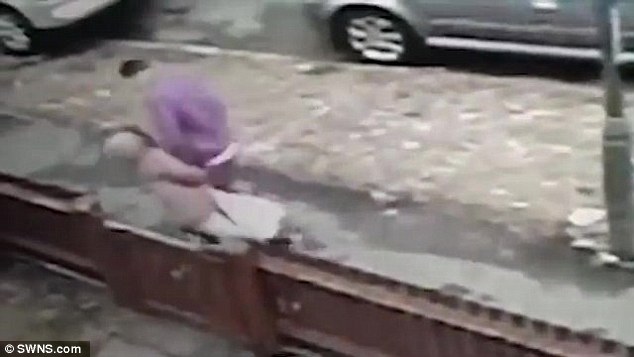 Derbyshire Police released shocking CCTV footage of the girl bravely trying to fend off her attacker, before he fled with her iPhone 6 on February 18 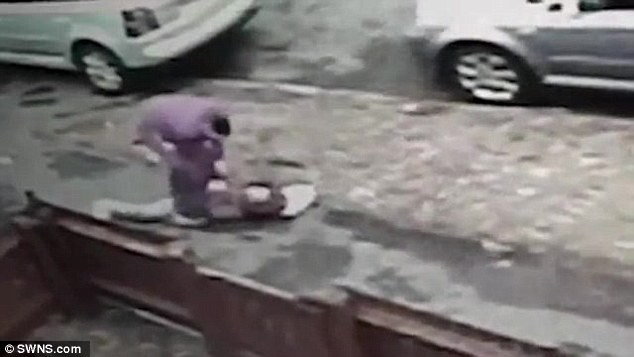 The force thanked a number of celebrities, including Piers Morgan, Nick Knowles, Michael Vaughan and Gaby Roslin, for retweeting their appeal after the incident

‘They found the person responsible in what seemed like the blink of an eye and have been very supportive throughout.

‘I’ve also been blown away by the generosity of people in making donations.

‘It means I can replace my phone, replace the clothes I was wearing and so much more.’

The mother of the youngster added: ‘I would just like to say a big thank you to all the people that reacted to the police’s plea for help.

‘My daughter was very shaken by what happened, but the support and generosity she has been shown has been amazing.’