Patriots have habit of Super Bowl trips, Rams are…

The Brady bunch are back at the Super Bowl to cheer on the New England Patriots and their star quarterback.

Tom Brady shared a photo of his family taken inside Mercedes-Benz Stadium in Atlanta during on Saturday.

The Patriots quarterback captioned the photo, ‘Family and Football #LFG.’

His wife, Gisele Bündchen, 38, also shared a selfie on Instagram with the caption, ‘I got your back!’

Brady was all smiles on Saturday morning at Mercedes-Benz Stadium as he posed for a picture with his wife, mother Galynn, father Tom Sr., brother-in-law Kevin Youkilis, and other family members all wearing jerseys. 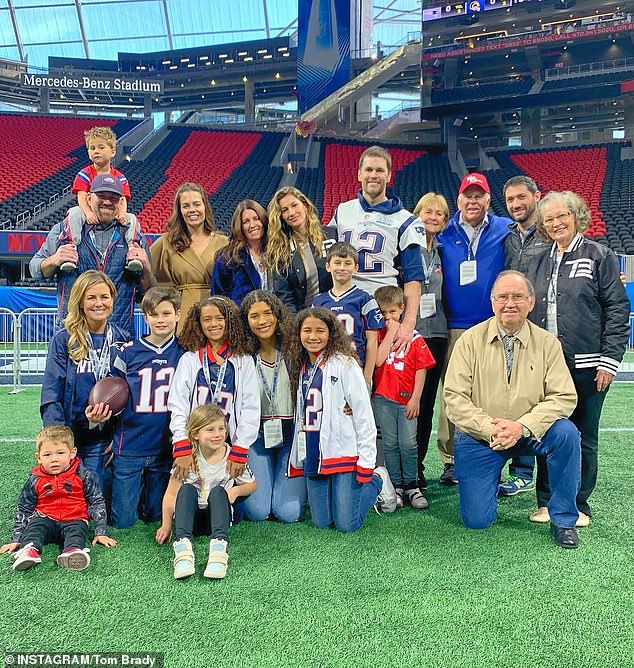 Brady’s crew was among more than 800 friends and family members that joined players, coaches, and front office staff ahead of Sunday’s big game.

Along side Brady’s Brazilian supermodel wife and Victoria’s Secret model, Gisele, were their children Vivian, six, and Benjamin, nine.

Guests mingled on the field, while the Patriots posed for various group photos.

‘This breaks up the day and lets them participate in it with their families,’ coach Bill Belichick said. ‘This is a dream for every player to play in this game, so to be able to share it with loved ones and family is special. We have tried to embrace it.’ 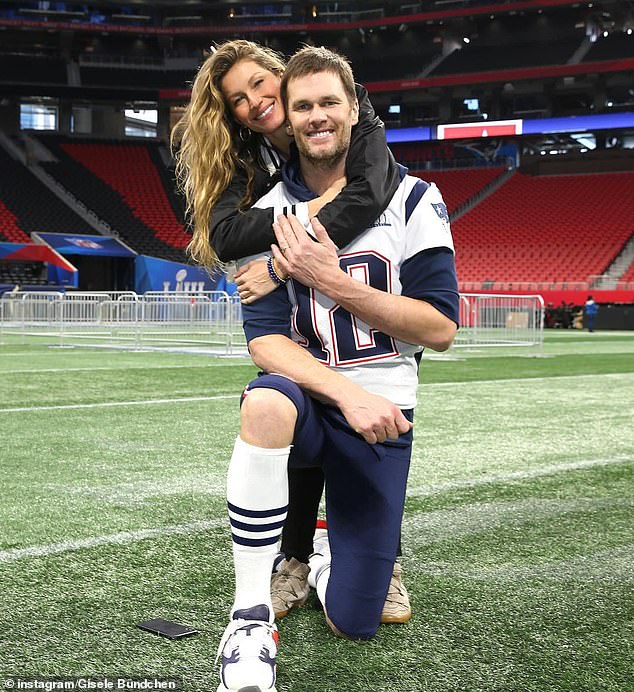 Brady’s wife, Gisele Bündchen, shared a photo of the two of them on Instagram with the caption, ‘I got your back!’

If experience is a factor in Sunday’s Super Bowl, the overwhelming edge is with the 2½-point favorites from Foxborough who are 5-3 in NFL title games with Tom Brady at quarterback and Bill Belichick in the hoodie on the sideline.

The Rams, whose past two Super trips were representing St. Louis in 2000 and ’02, have four players who have gotten this far. New England has four on its defensive line alone.

‘Probably, throughout the week, it gives them an advantage,’ Rams tackle Andrew Whitworth says – and he’s finishing up his 13th NFL season, though it’s his first that ends in February.

‘They kind of know this week. They know when things are a little anxious, when to kind of, ‘Hey, turn it on and get ready to play.’ They probably have a process and plan for the week.’ 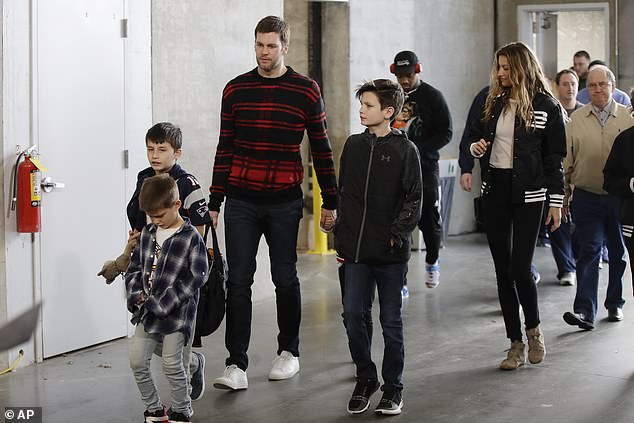 New England Patriots quarterback Tom Brady, his wife Gisele Bundchen, and their family arrive for a NFL football walkthrough ahead of Super Bowl 53 against the Los Angeles Rams. Brady sported a red and black striped sweater with slim-fitting pants

Athletes in every sport talk about how helpful a comfort zone can be. It’s even more pronounced when it accompanies events such as the Super Bowl, which, for better or worse, transcends football.

Brady and most of his teammates, in their third straight visit, barely flinch at all the attention, media demands and alterations to the norm they encounter during Super Bowl week – although they were taken aback somewhat by the cacophony and circus atmosphere of opening night on Monday. 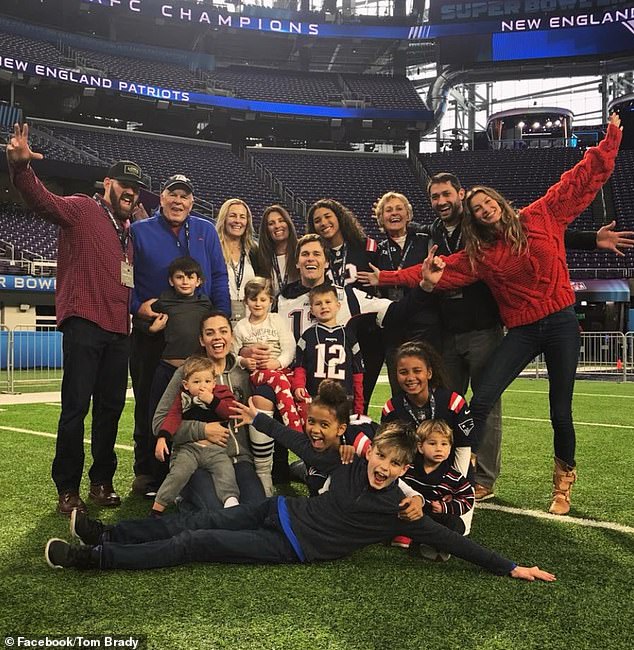 This is the third year in a row the Brady family has traveled to the Super Bowl. They took a photo inside U.S. Bank Stadium in Minneapolis ahead of Super Bowl LII last year 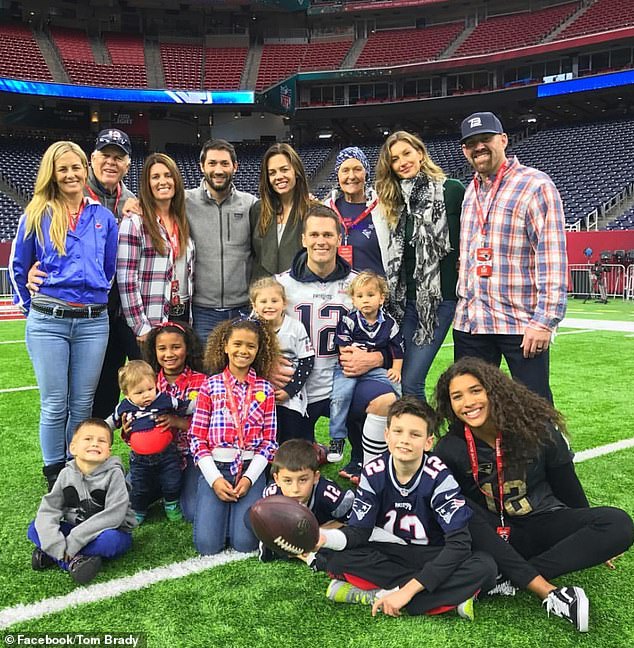 In 2017, they posed at NRG Stadium in Houston ahead of Super Bowl LI 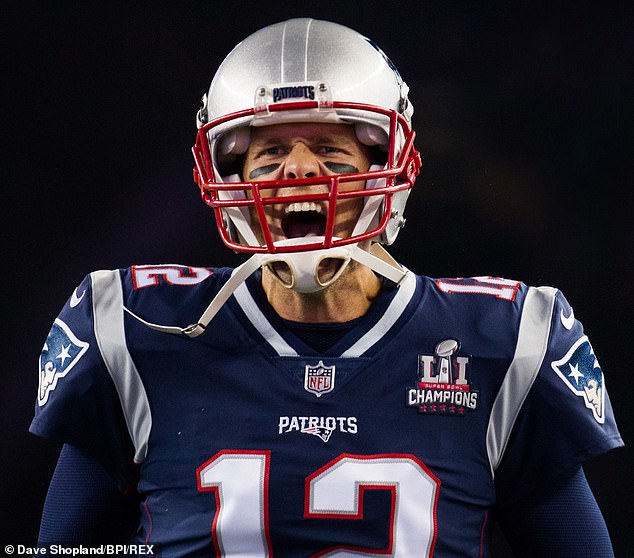 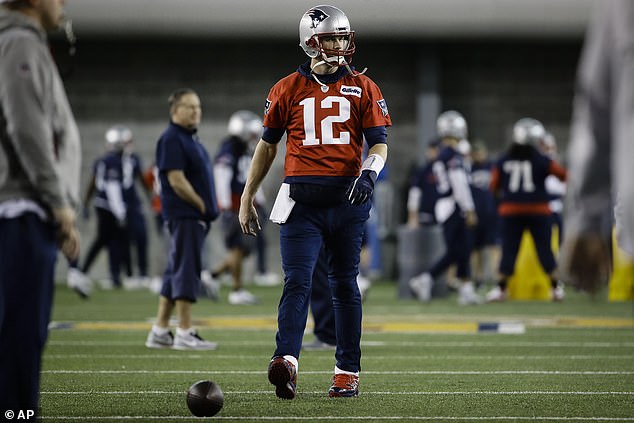 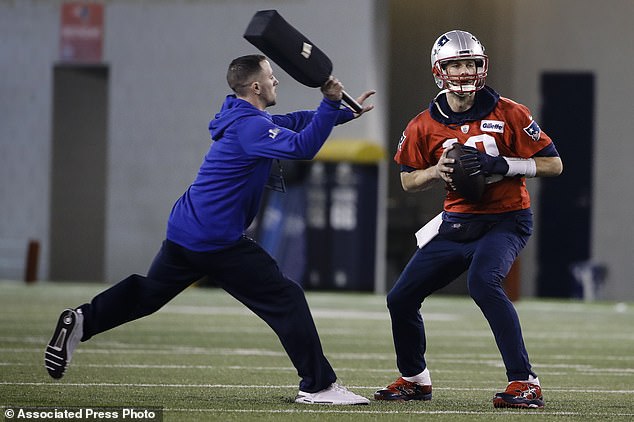 At 41, Brady already is the oldest quarterback to start a Super Bowl 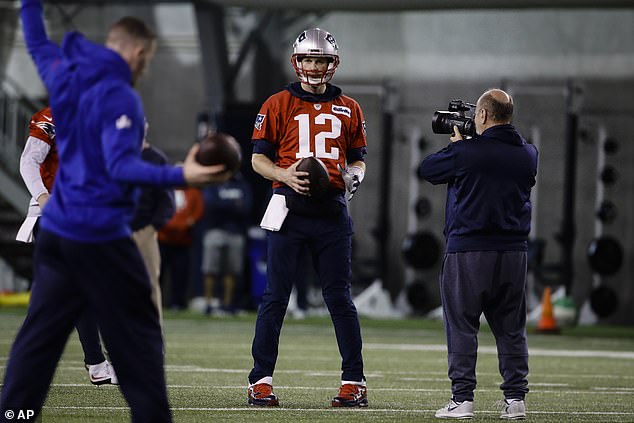