New England Patriots rookie place kicker Justin Rohrwasser has announced he will remove a tattoo on his left arm since learning it is associated with a right-wing militia that has been accused of racism in both the United States and Canada.

The 23-year-old Marshall University product says he was 18 when got the Three Percenters tattoo, which he says does not represent who he is or his political beliefs.

‘As soon as I saw what it was linked to on Saturday, it was exactly that time I knew I had to get it totally taken off my body,’ Rohrwasser told Boston’s WBZ-TV on Monday after being drafted by the Patriots in the fifth round of last week’s NFL Draft. ‘I said cover it up [to reporters], but I want to get it removed from my body. It’s shameful that I had it on there ignorantly.’

On its website, the right-wing Three Percenters group says it isn’t an anti-government militia but ‘we will defend ourselves when necessary.’ The group takes its name from the false claim that three percent of American Colonists fought in the Revolutionary war.

The group was founded in 2008 in response to Barrack Obama’s election as president, which sparked some allegations of racism against the Three Percenters. Those accusations intensified after the group provided security in 2017 for the Unite the Right rally in Charlottesville, Virginia in which neo-Nazis protested alongside other far-right organizations. 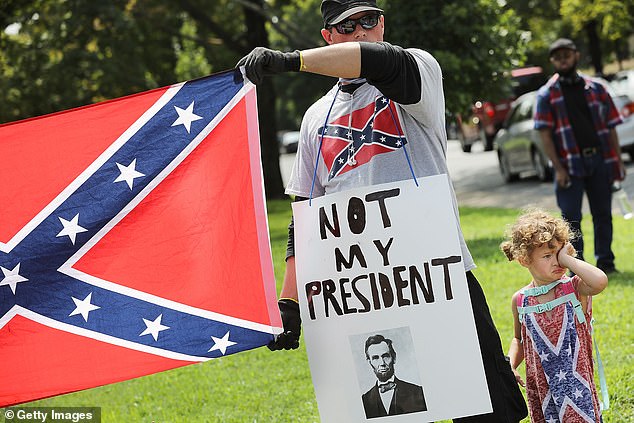 Aria Berry (R), 4, and her father James Berry join about 20 members and supporters of Confederate heritage groups, including CSA II: The New Confederate States of America and the Virginia Task Force of Three Percenters or the ‘Dixie Defenders,’ as they rally across the street from the Jefferson Davis Monument August 19, 2018 in Richmond, Virginia. The groups were protesting against the recommendation from Richmond Mayor Levar Stoney’s Monument Avenue Commission to remove the statue. About 100 counter protesters rallied at the same time and prevented the confederate groups from reaching the steps of the Davis monument

Demonstrators at the event chanted ‘Jews will not replace us,’ waved ‘White Lives Matter’ flags, and one neo-Nazi, James Alex Fields, drove his car into a crowd of anti-racist protestors, killing a 32-year-old woman named Heather Heyer.

Although the Three Percenters have since distanced themselves from the Unite the Right rally, the Southern Poverty Law Center still considers them an anti-government group. The group has also grown in Canada, where it has been described as an anti-muslim militia.

‘They are the most dangerous group right now,’ former neo Nazi-turned-activist Maxime Fiset told CBC in 2018.

Rohrwasser said he should have researched the group before getting the tattoo, which he thought was a symbol of support for the military. 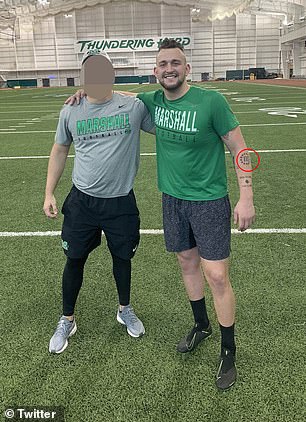 Rohrwasser pictured with his Three Percenters tattoo while attending Marshall

‘It was described to me as the percentage of colonists that rose up against the government of the British,’ he said. ‘I was like, “Wow, that is such an American sentiment, a patriotic sentiment.”

When asked if the tattoo was an issue during his time at Marshall, Rohrwasser said he never heard of the links between the Three Percenters and racist right-wing groups.

‘No, never,’ he said. ‘The first time I found out what it was linked to was on Saturday. That’s why it was so surprising.

‘We were celebrating and hugging [on Saturday],’ he continued. ‘So happy. I went on to Twitter. I saw that someone had taken a picture of me and put it with my tattoo and linking me to some horrific events — obviously Charlottesville and these horrible things.’

Rohrwasser then apologized to everyone who has since defended him following the revelation about the tattoo.

‘I’m sorry for all my [friends] and family that have to defend me,’ he said. ‘Putting them in that compromising position is one of the biggest regrets I’ll ever have. To them, I’m sorry,’ he said. ‘I’m going to learn from this. I’m going to take ownership of it. This is not who I am. No matter what, that’s not who I am. Hopefully, you will all find that out.’ 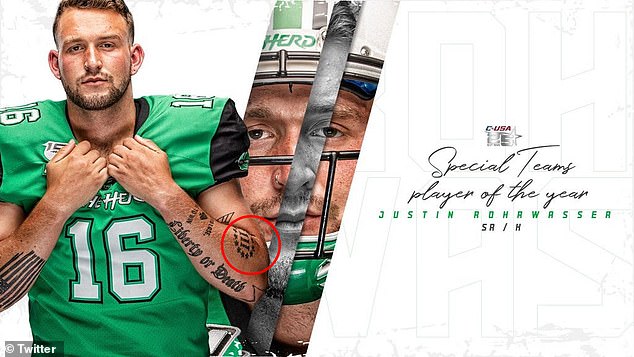 In response to the unsavory ties, Rohrwasser told reporters: ‘When I look back at it, I should have done way more research before I put any mark or symbol on my body’

In a call with reporters on Saturday, the rookie said the tattoo did not represent his political views and was not meant to represent an association with the anti-government group, often accused of being white supremacists.

‘I got that tattoo when I was a teenager and I have a lot of family in the military and I thought it stood for a military support symbol at the time,’ he explained. ‘Obviously, it evolved into something that I do not want to represent.’

According to their website, the group stands for ‘freedom, liberty, and the constitution’ and vows to be ‘the last defense to protect the citizens of the United States.’ The Southern Poverty Law Center and the Anti-Defamation League described the Three Percenters as an anti-government extremist group.

In response to the unsavory ties, Rohrwasser told reporters: ‘When I look back at it, I should have done way more research before I put any mark or symbol on my body.

‘It is not something I ever want to represent, so it will be covered,’ he assured.

Rohrwasser has a number of other tattoos which read ‘Liberty or death’ and ‘Don’t tread on me’, the famed Boston Tea Party slogan, with another referencing the Dave Matthews Band.

During a 2019 interview, Rohrwasser described his selection of tattoos as ‘random.’

Rohrwasser was drafter to the Patriots as a replacement for their all-time leading goalscorer, Stephen Gostkowski, who was released last month.

Rohrwasser, from Clifton Park, New York, described himself as ‘a hard worker and somebody who is going to chase after the best version of themselves and a good teammate,’ ESPN reported.

During his time at Marshall, the six-foot-three 230 lbs prodigy was named Conference USA Special Teams Player of the Year in 2019 after converting 18 of 21 field goals with a long of 53 yards, while going 35-of-36 extra points.