Kristina Kubiliene is taking legal action after saying that working at the brand’s Hammersmith studio left her barely able to open a handbag.

She alleged that her time spent at the west London workshop left her unable to work and needing surgery to have any kind of movement in her hands.

Ms Kubiliene worked at the firm for eight years and claims she ended up working up to 15-hour days for seven days a week without regular breaks. 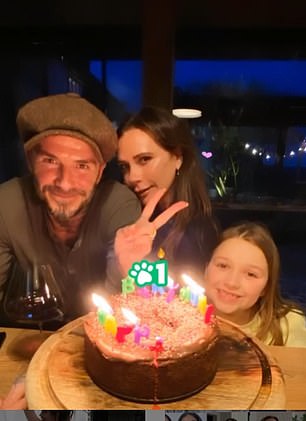 Hitting the headlines: The fashion designer has been fiercely criticised for her decision to furlough her staff despite her family possessing a fortune of £335 million and is now being sued over carpel tunnel

Ms Moyeed said: ‘She was a pattern cutter and very good at this job, but because she was good she was tasked with working for long periods and with heavy fabrics. It was these repetitive, awkward and sustained movements which cause carpel tunnel syndrome to advance rapidly in hands and wrists.

‘When I last saw her she could barely open her handbag. She is unable to work and has had to undergo surgery to have any kind movement in her hands.

‘Her job involved lifting rolls of fabric, weighing 20 to 35kg, then laying out and pinning the fabric to patterns. Once pinned she would shrink the fabric with an industrial iron, again very heavy. This procedure would take 30 to 60 minutes. Next she would cut the fabric, which required significant pressure and accuracy holding with her left hand and cutting with her right. This task took up to three hours depending on the garment.

‘Normally she worked 10am to 6pm, but twice a year for two weeks she attended New York Fashion Week. For a month beforehand her workload increased to up to 15 hours a day, seven days a week, without regular breaks or rest. During these times her hands and wrists were so sore she needed painkillers to work.’

The lawyer added that Victoria Beckham Limited failed to implement measures to prevent the long-term injury.

Ms Kubiliene last year had an operation to relieve her carpel tunnel syndrome and as a result of the surgery was unable to return to work.

Her solicitor said:  ‘She is still unable to work and has such a weak grip she needs help around the home to do basic tasks. It is not known when, if ever, she will be able to return to a similar role, or any kind of employment.’

The case comes amid a backlash hitting the Beckhams after Victoria furloughed 30 staff at her struggling fashion label, despite having a staggering family fortune of £335 million.

It means she was taking advantage of a Government emergency scheme to claim what was estimated to be tens of thousands of pounds of taxpayers’ money.

The controversial business decision attracted a number of comments, including comedian Ricky Gervais, who ‘liked’ a comment on social media which said: ‘The f****** Beckhams, sorry I’m done with them now. Shame on them.’

Piers Morgan weighed in after the Beckham family spokesman justified the decision to get taxpayers to fork out 80 per cent of the wages for 30 of her staff by saying: ‘Having assessed all our options, we made the decision to furlough a proportion of staff on an enhanced package.’

Piers said Victoria’s business was only a vanity project, adding: ‘Lost money year after year. Been bailed out by her famously rich husband David Beckham. Sorry, this furlough scheme was not for prima donna millionaires like you.’

Earlier this week Good Morning Britain co-host Susanna Reid, 49, explained that Victoria is reportedly forgoing her own salary and donating to food banks and asked what more she should do.

After the scandal broke, her public relations team advised Victoria to hold back on boastful Instagram pictures in a bid to soften her image.

In previous days, there had been a constant supply, with the couple making public videos of themselves baking or designing tie-dye T-shirts with their daughter Harper.