The footage that proves Paul Gallen’s opponent never stood a chance: Lucas ‘Big Daddy’ Browne gorges on a greasy sausage roll moments before being demolished in under two minutes

Footage circulating on social media proves why Paul Gallen’s opponent never stood a chance in the ring – and was later humbled inside two minutes.

Lucas ‘Big Daddy’ Browne, 42, expected to make light work of the former footy star in their heavyweight bout on Wednesday night in Wollongong, on the NSW south coast.

The former WBA world champion clearly didn’t respect his rival, especially after he was spotted devouring a greasy sausage roll moments before the bout.

Pre-fight, rumours were rife Browne had cut corners in his preparation ahead of his highly anticipated showdown with Gallen. 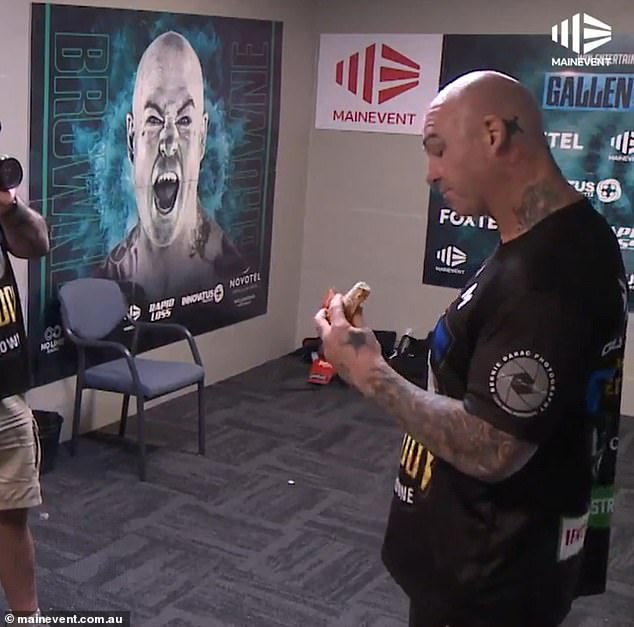 Aussie legend Barry Michael said Lucas Browne (pictured) paid the price for his nonchalant attitude against Gallen, who was meticulous in comparison and out to silence the doubters

His conditioning was poor, his diet unacceptable.

Scoffing down a sausage roll moments before his moment of truth at the WIN Entertainment Centre was the epitome of arrogance.

And didn’t it come back to bite the 117kg, former pub bouncer in Sydney’s western suburbs.

Aussie legend Barry Michael said Browne paid the price for his nonchalant attitude against Gallen, who was meticulous in comparison and out to silence the doubters.

‘I did hear rumours about his training camp that Lucas wasn’t looking good,’ Michael said after the fight.

‘But I still did believe that with his experience and punching power he (Browne) would win… but I admit I got that totally wrong.

A shell-shocked Browne was dropped twice in the opening round, with Gallen landing a series of monster strikes to the head.

His first savage left hand to the temple set the tone, with Browne tumbling forwards.

Referee Les Fear had seen enough, ending the fight after one minute and 55 seconds.

Gallen will be laughing all the way to the bank – he earnt a whopping $450,000 for two minutes ‘work’ in the ring – and now the self-confessed prize fighter can effectively box whoever he desires.

Safe to say the former Cronulla Sharks enforcer and NSW Blues skipper won’t scoff down a sausage roll moments before his next bout.

That kind of behaviour is reserved for Browne – who may need to renew his security doorman licence as his time in the ring is over. 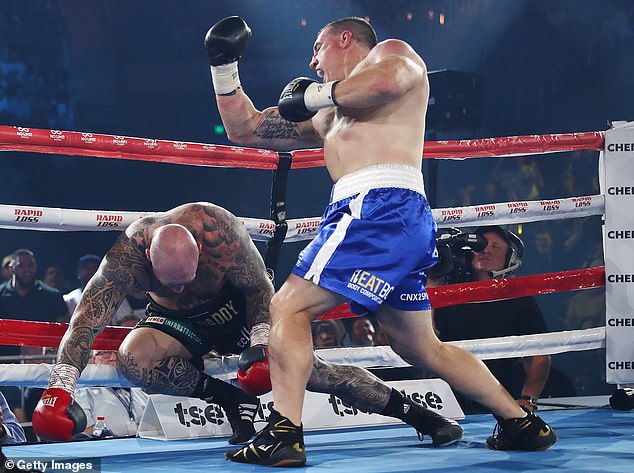 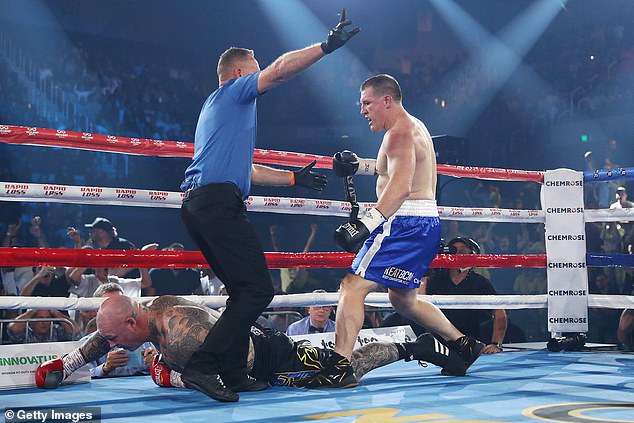