George Osborne’s Budget came under attack from financial experts last night, with one saying that if he were the Chancellor he would not be able to sleep at night.

Paul Johnson, head of the Institute for Fiscal Studies, gave him only a 50/50 chance of fulfilling his pledge to get Britain back in the black by the end of this Parliament in 2020.

Mr Johnson added that Britain should be ready for ‘genuinely big’ tax rises. In an unremittingly bleak assessment he also said that, based on forecasts in the Budget, wage growth was too slow and living standards would fall.

Paul Johnson (pictured), head of the Institute for Fiscal Studies, gave Chancellor George Osborne only a 50/50 chance of fulfilling his pledge to get Britain back in the black by the end of this Parliament in 2020

The attack came a day after Mr Osborne had admitted a £56billion deterioration in the nation’s finances.

At the same time, the Chancellor was facing a growing revolt on disability benefit cuts.

At least 20 Tory MPs are threatening to oppose reductions in the Personal Independence Payment made to the disabled.

Tory MPs said the plan was toxic and they would oppose it. Ministers were last night sent out to defend the cuts, which they insist are fair, and Work and Pensions Secretary Iain Duncan Smith wrote to all Conservative MPs to urge them to back the changes. 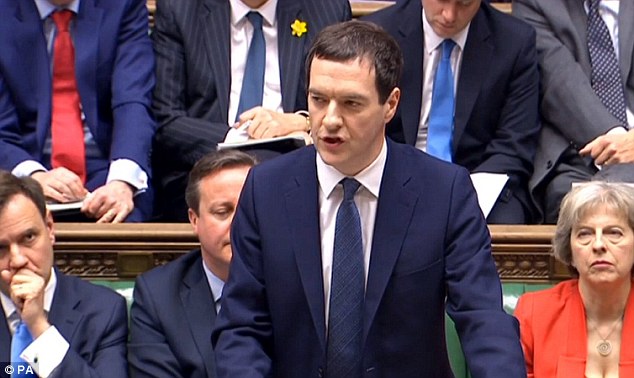 BACKLASH ON CASH FOR DISABLED

By Tamara Cohen, Political Correspondent for the Daily Mail

The Chancellor appeared to be in retreat yesterday over plans to slash disability benefits by £4.4billion over five years.

A ‘very significant’ number of Tory MPs have raised their concerns about his Budget proposals to cut support for up to 640,000 infirm people.

The cuts to the personal independence payment (PIP), which helps sufferers with tasks such as dressing and using the bathroom, would save £590million next year and £1.2billion by 2020.

The average loss per claimant would be £3,500 a year, according to the Institute for Fiscal Studies, but could be considerably more in some cases. Andrew Percy, the Tory MP for Brigg and Goole, has led the rebellion by sending George Osborne a letter from several Tory MPs calling for a rethink.

Mr Percy said: ‘We said we were very concerned about proposals to change PIP. These changes are not defensible and shouldn’t happen. They are wrong-headed and really hit the wrong people. It is fair to say the numbers on this who have expressed concern are very significant indeed.’

Yesterday, the Chancellor already appeared to be backing down over the policy which was slipped out in the small print of the Budget and would save £4.4billion over five years.

‘We have got to make sure we have a system that works,’ he told BBC Breakfast.

‘I’m always happy to listen to proposals about how to improve on that but we have got to control our disability budget and make sure help goes to the people who need it most.’

Welfare Secretary Iain Duncan Smith moved to reassure MPs that ‘no-one currently on PIP will see any change until their next review’, beginning in January 2017. He added: ‘We must look after our most vulnerable at every turn.’

But Mr Osborne was already signalling he may have to rethink the plan – which would leave him with another huge hole in his finances. Also yesterday:

Following Wednesday’s Budget the IFS said ‘we should all be worried’ about the future as storm clouds gather over the economy.

The think-tank warned that the Chancellor is ‘running out of wriggle room’ and gave him just a 50 per cent chance of balancing the books by 2020 as planned.

Mr Johnson said: ‘It must be something that if I were the Chancellor would be keeping me awake at night now.’

He said Mr Osborne could be forced to implement ‘genuinely big’ tax rises and spending cuts to get Britain back into the black.

The Institute also shed light on another £9.9billion of cuts for 2020-21 hidden in the Budget documents – extending austerity into the next decade.

The gloomy outlook means there will be little or no money for sweeteners for voters in the build-up to the next General Election in 2020, he added.

The warnings came a day after the independent Treasury watchdog the Office for Budget Responsibility slashed its forecasts for economic growth over the next five years.

The OBR said the weaker outlook had blown a £56billion black hole in the Chancellor’s plans.

Mr Osborne insisted he could meet his target of balancing the books – as long as the economy was growing and was not in recession.