Paul McCartney proved that he still won’t dance with another during a surprise performance, as he serenaded his wife Nancy Shevell at a festive bash on Saturday.

The legendary singer, 77, delighted guests with a surprise performance of the 1963 Beatles hit I Saw Her Standing There at the party his wife hosted at Hudson House in Jersey City for the New England Motor Freight (NEMF) company.

In a video captured by one of the guests, Paul threw of his jacket before breaking into a rendition of the classic tune, with Nancy and the guests singing along in unison.

He’s still got it! Paul McCartney showed he’s still the showman as he serenaded his wife Nancy Shevell with a Beatles classic at a festive bash in Jersey City on Saturday

Paul proved that after 50 years in showbusiness he is still the perfect performer as he belted out the hit to wife Nancy in the video.

Pulling off his jacket, the crowd cheered with delight as he sang the famous tune, which he co-wrote with John Lennon during the band’s heyday.

Another video also showed Paul dancing with Nancy and the rest of the guests to the Beyonce hit Crazy In Love. 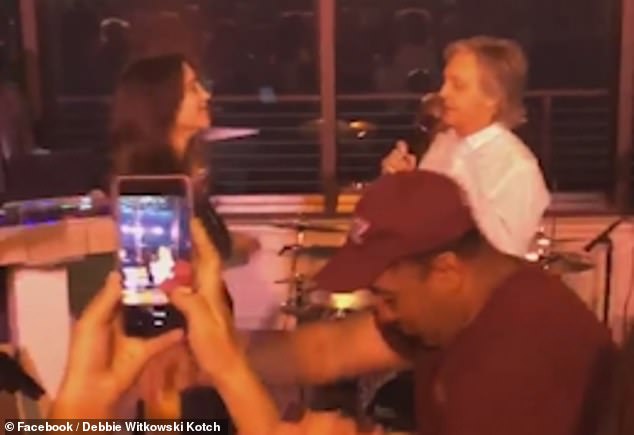 Sensational: The music legend took to the stage to perform the 1963 Beatles hit I Saw Her Standing There to Nancy, who hosted the bash for the New England Motor Freight 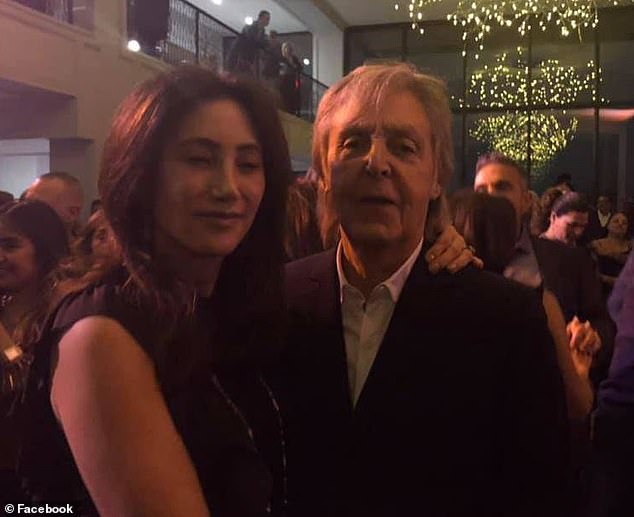 Fun: The party was eagerly documented by many of the guests on social media, who were delighted to see Paul make a surprise appearance 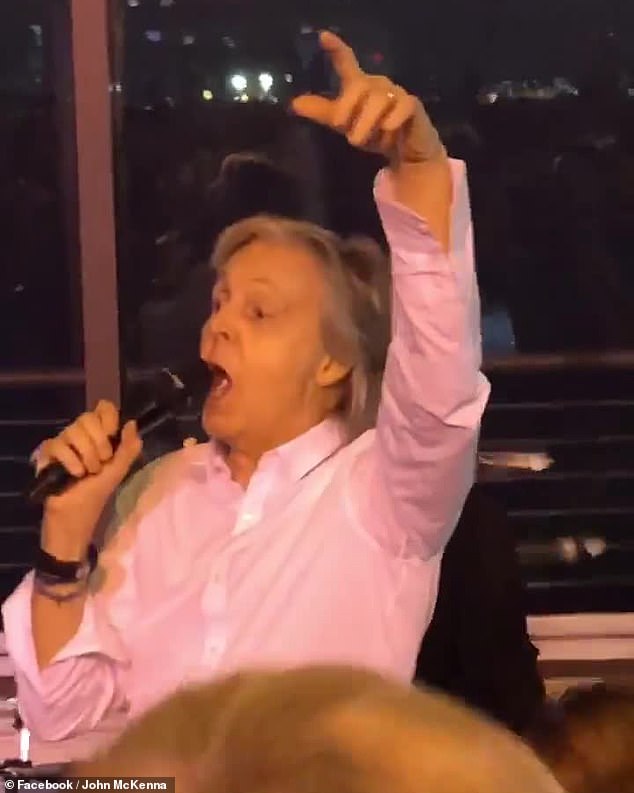 Jovial: Paul was in high spirits as he delivered an energetic performance of one of The Beatles’ biggest hits to the guests in attendance 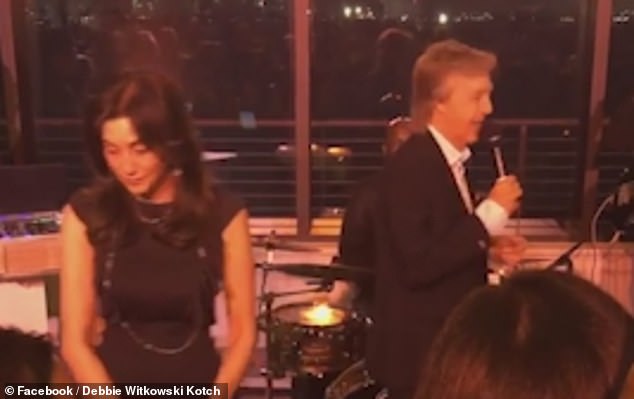 Dramatic: In a video posted by one of the guests, Paul rips off his jacket before breaking into a rendition of the song for his wife 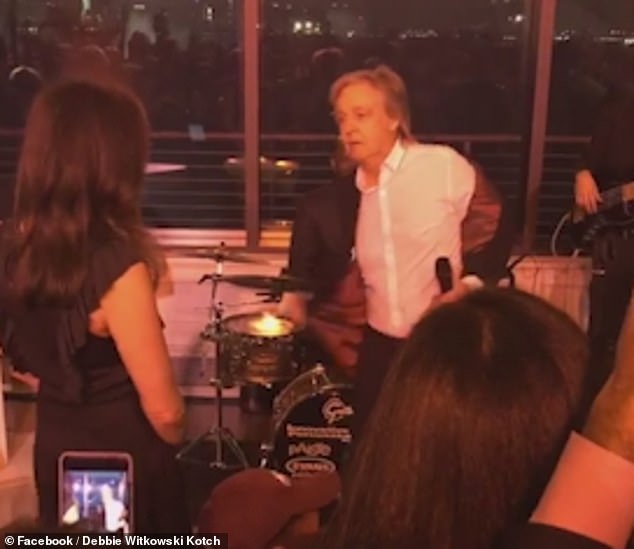 Off he goes! Nancy – who hosted the bash as an executive for the company which is co-owned by her family – appeared to be delighted by the impromptu performance

The party in honour of NEMF’s staff was held at Hudson House, which is based at Port Liberte and overlooks the Hudson River and the Statue Of Liberty.

‘Paul McCartney, his wife and their entire staff were all a pleasure to work with and we hope to continue this tradition of creating memories with them.’ 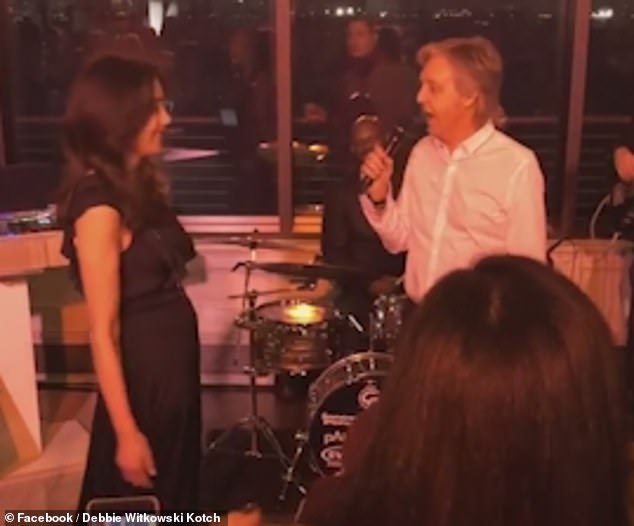 Sensational: Paul proved that after 50 years in showbusiness he could still belt out a hit as he took to the stage to perform with Nancy 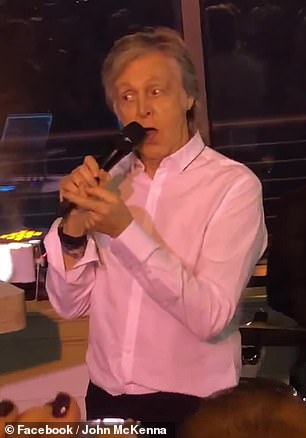 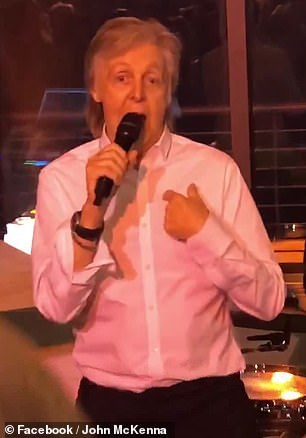 Suave: The Hey Jude hitmaker was looking dapper for the performance as he whipped off his suit jacket to take to the stage 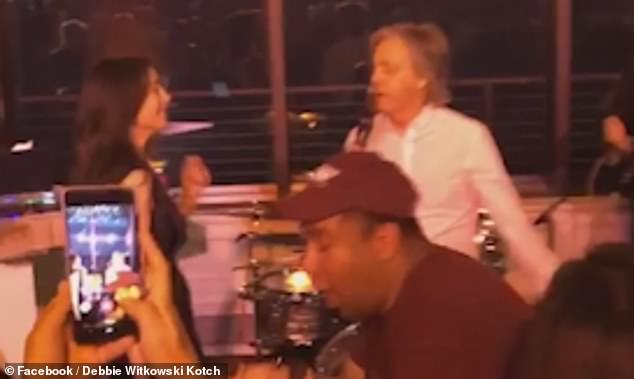 Iconic: It is thought that the party lasted from 7pm to midnight, and Paul and Nancy were in attendance for the whole

New England Motor Freight, Inc. provides less-than-truckload (LTL) carrier services in the United States and Canada and is based in Elizabeth, New Jersey.

In 1977, the chairman of the board, Myron P. Shevell – Nancy’s father – bought New England Motor Freight from Farmland Dairies.

Under his leadership, the company grew from 55 units and five terminals to more than 10,000 pieces of equipment and 40 terminals throughout the Northeast, Midwest and Puerto Rico.

In February, the company announced it was seeking Chapter 11 bankruptcy protection.

Nancy is an executive at NEMF.

Nancy, who celebrated her 60th birthday last week, is an executive for NEMF which is owned by her family, and is thought to have hosted the bash.

Maddy went onto tell the publication that the party lasted from 7pm until midnight, and Nancy and her husband Paul stayed for the entire evening.

Several thrilled guests also took to social media to share some snaps with Nancy and Paul.

Paul and Nancy tied the knot in 2011 in a low-key ceremony at Old Marylebone Town Hall, London after almost four years together.

It comes after Paul confirmed last week that will be headlining Glastonbury 2020, in honour of the iconic festival’s 50th anniversary.

The Glastonbury Twitter account wrote: ‘We are incredibly excited to announce that @PaulMcCartney will headline the Pyramid Stage on the Saturday night of Glastonbury 2020.’

Paul, 77, retweeted the post and wrote: ‘Hey Glasto – excited to be part of your Anniversary celebrations. See ya next summer!’ 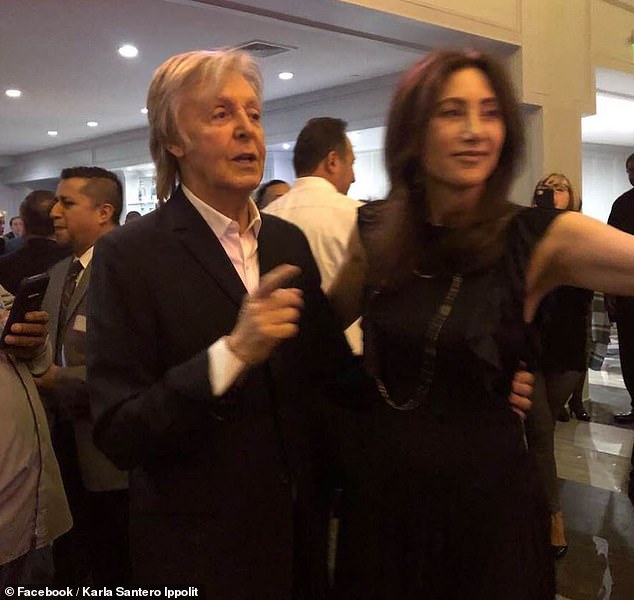 Together: Nancy and Paul were the picture of happiness as she hosted the bash for the employees of the company that her family co-owns 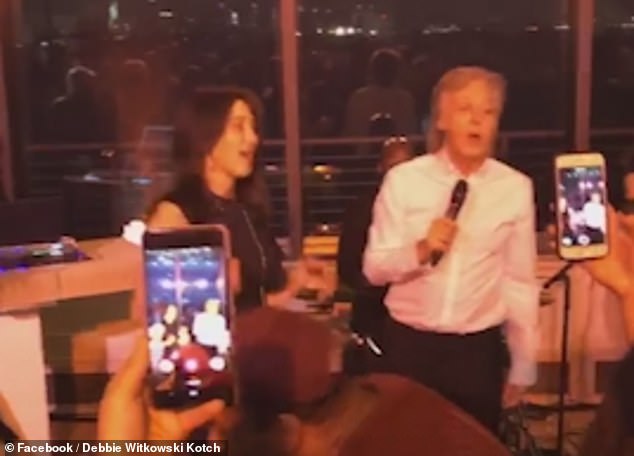 Mr and Mrs: Paul and Nancy tied the knot in 2011 in a low-key ceremony at Old Marylebone Town Hall, London after almost four years together 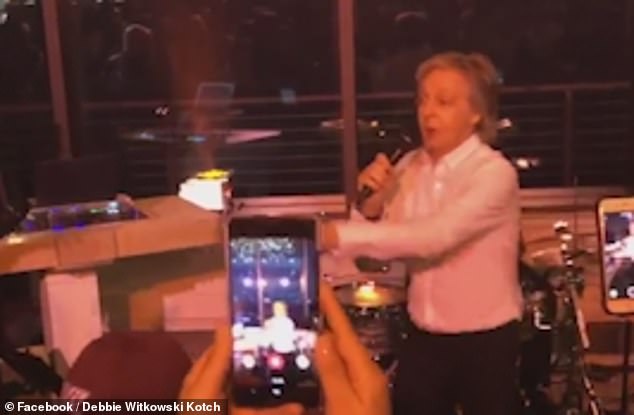 Exciting: It comes after Paul confirmed last week that he will be headlining Glastonbury 2020, in honour of the iconic festival’s 50th anniversary