Attack, attack, attack. It has become a frustrated chant among Manchester United supporters in the difficult years since Sir Alex Ferguson abdicated at Old Trafford.

It is a sign of impatience that his successors have failed to deliver the kind of exhilarating football that became a hallmark of Ferguson’s title-winning teams.

Worryingly, it wasn’t the fans but Paul Pogba who was repeating the mantra as he tried to express what he felt about United’s tactics against Wolves. 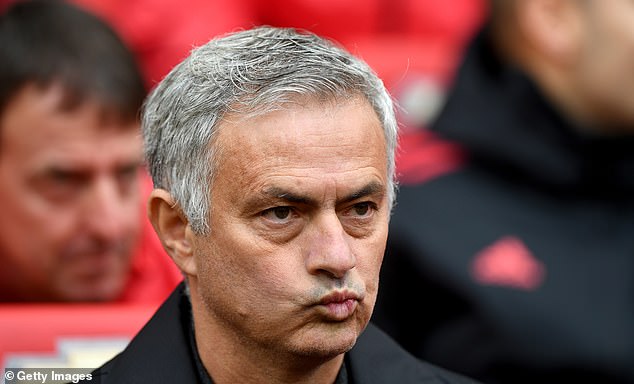 ‘When we are at home we should attack, attack, attack,’ said United’s £89million record signing. ‘That’s Old Trafford. We are here to attack. I think teams are scared when they see Man United attacking and attacking. That was our mistake today.

‘We were winning 1-0 so it was positive for us. Then we tried to defend a bit more against the counter-attack. We stopped playing forward like in the first half and we didn’t put them in trouble.

‘We are at Old Trafford and we should just attack and press like we did against Tottenham, Liverpool, Chelsea and Arsenal last season. When we play like that it’s easier for us.’

So what — or who — is stopping United from being true to their traditions? Pogba didn’t leave much to the imagination. His relationship with manager Jose Mourinho remains decidedly frosty. ‘I can’t tell you because I’m a player,’ he added. ‘It’s not me.’ 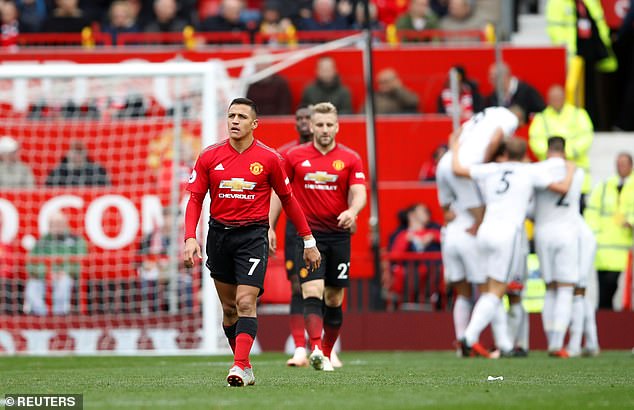 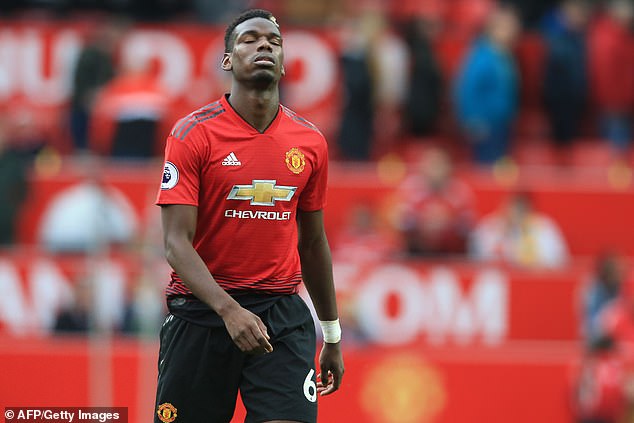 A suggestion that Pogba didn’t have enough options going forward brought a wry laugh. ‘I’m not the manager, I cannot say that, but obviously we should show more options,’ he added. ‘We should move better.’

Unfortunately for United, it isn’t that simple. Firstly, they were kept on the back foot for long periods of the game by an excellent Wolves side full of energy and an attacking intent of their own.

Secondly, when United tried to attack, they simply didn’t have it in them. There wasn’t nearly enough creativity to worry Wolves.

Alexis Sanchez and Romelu Lukaku made little impression and Anthony Martial and Juan Mata came on to no effect. It is worrying that so many talented players can look so average. Once again, they resorted to lumping long balls up to Marouane Fellaini. 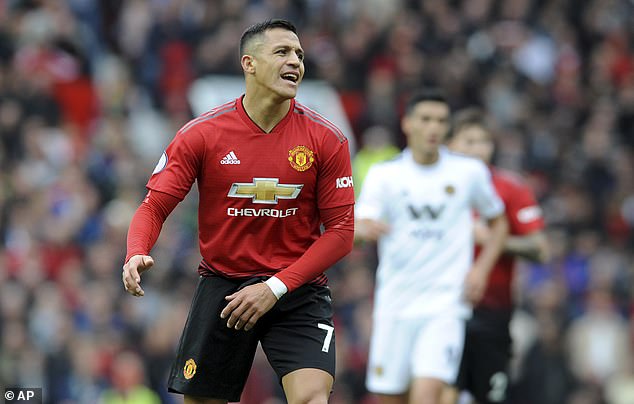 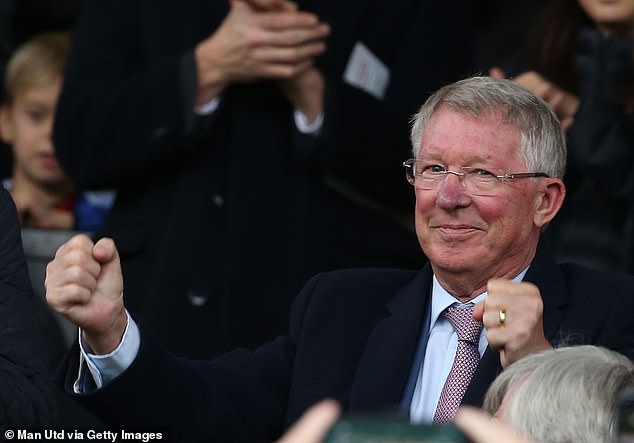 LOOKING GOOD FOR 76 NOT OUT

Sir Alex Ferguson returned to Old Trafford on Saturday for the first time since his emergency brain surgery in May — and Manchester United fan Geoffrey Boycott was there to welcome him.

‘Nice to see the great man back fit and healthy,’ tweeted the Yorkshire and England cricket legend.

A smiling Sir Alex, 76, waved to the crowd, who gave him a lengthy standing ovation.

What must Ferguson have made of it all? On the day that the legendary manager returned to Old Trafford for the first time since life-saving brain surgery in May on a wave of emotion, the team once again suffered by comparison with his own.

Comparisons with their rivals are no kinder. Six games into the season and already United have scored 10 fewer goals than Manchester City. Worse still, they have fallen eight points behind Liverpool.

‘It’s not that we should get worried, but we should obviously get closer,’ said Pogba. ‘We’ve had three games at home and we’ve got only four points. It’s not enough.’

The Frenchman set up Fred for United’s goal against the run of play with a lovely cushioned pass but was then dispossessed in the build-up to Joao Moutinho’s splendid equaliser. Like Leicester and Tottenham before them, Wolves came to Old Trafford and gave it a real go.

After three away wins in a row for United over Burnley, Watford and Young Boys in the Champions League, this was a step backwards at home.

Mourinho was scathing of his team’s attitude, claiming Wolves played like it was a World Cup final and United were only at 30 per cent.

‘Maybe he’s right, I don’t know,’ said Pogba rather unconvincingly. ‘Maybe we should have showed more hunger. Maybe we felt a bit of fatigue because we played in the Champions League.’ 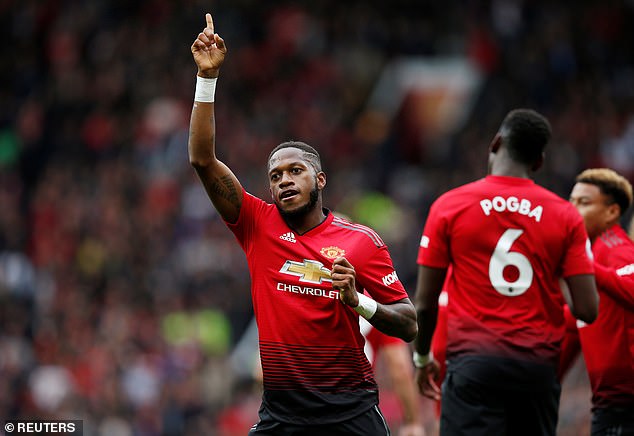 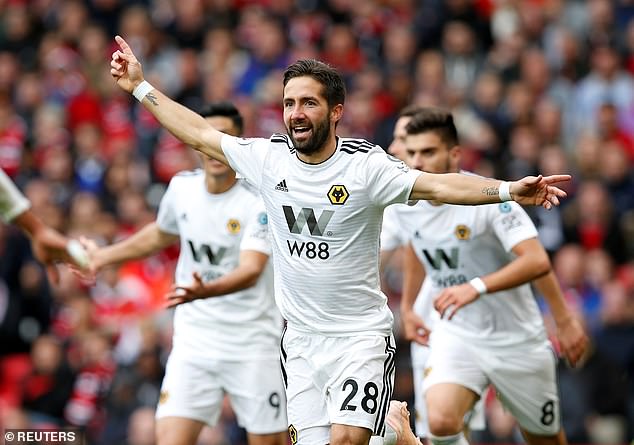 Wolves have now drawn 1-1 with both Manchester clubs, two results that have not flattered them in the slightest. There is a hunger and intensity about them, but also a confidence and dynamism that you would not expect from a club coming into the Premier League.

‘They’re as accomplished a team as I’ve seen in their first year out of the Championship,’ said Match of the Day pundit Danny Murphy.

There was certainly no fear as they took the game to their opponents once again, pressing United and creating the better chances.

‘They are not superheroes,’ said midfielder Ruben Neves. ‘They are players and if we do things well we can make it difficult for other teams. We’re never going to be afraid to play our football.’