Paulina Porizkova, 55, demonstrates how she gets her enviable abs with an at-home workout

Paulina Porizkova has given her fans a behind-the-scenes look at her at-home pilates workout after leaving her fans in awe of her enviable abs the day before.

The 55-year-old model took to Instagram on Wednesday to share a photo of herself in a sports bra and a pair of sweatpants that someone left at her house. While the post was about her outfit, people couldn’t help but ask how she got her toned abs.

As someone who is always up for sharing her beauty and fitness tips, she gave her fans what they were looking for and had her son Jonathan, 26, film her taking a virtual Nofar Method pilates class in her living room. 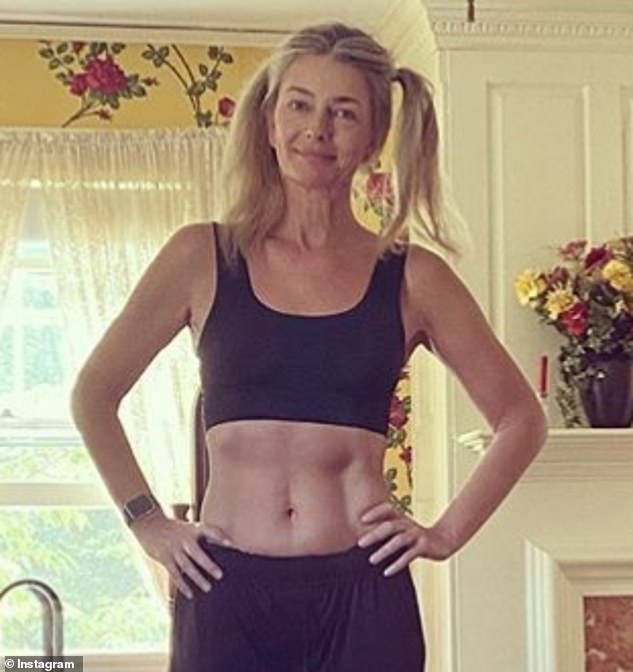 Inspiration: The model left Instagram in awe on Wednesday when she shared an image of herself showing off her abs in a sports bra

In the fast-motion video, the Sports Illustrated star can be seen doing a series of oblique V-ups, leg lifts, and hip raises on the floor while wearing a black sports bra and leggings.

Workouts that are touted by celebrities are often out of the average person’s price range, but one virtual Nofar Method class costs just $16.

The virtual workout sessions are done over Zoom, meaning attendees will get the same real-time instruction and cues that Paulina gets — without ever having to leave their homes.

‘So many of you commented on my abs yesterday, (thanks!) I asked Jonathan to show you guys how I got them and maintain them. @nofarmethod Pilates for me all the way!’ Paulina captioned the clip. ‘Super hard, but she changes it up so one doesn’t get bored.

‘I dare YOU not to develop a six pack if you can follow her class. (Which, btw, I can’t — I get yelled at all the time),’ she admitted. 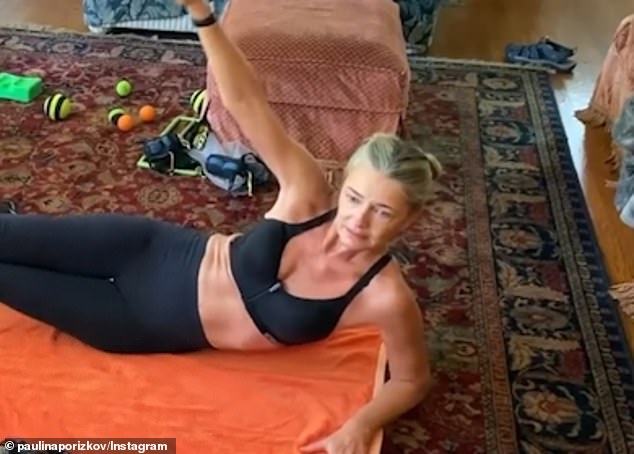 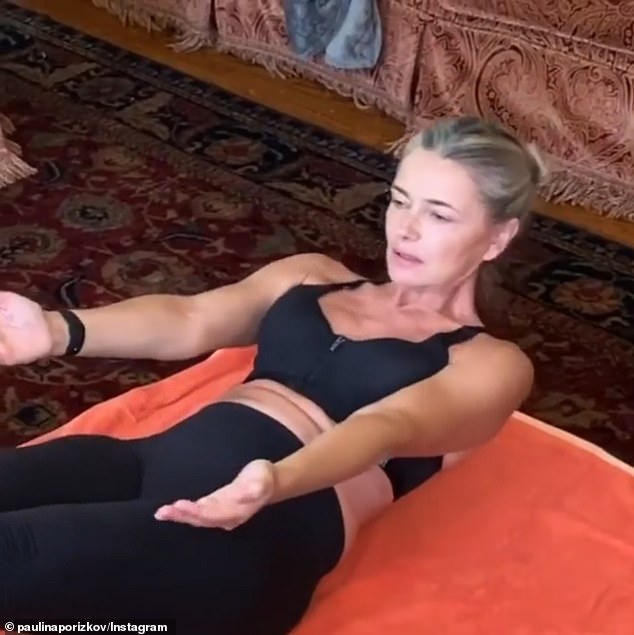 Demonstration: Paulina had her son Jonathan, 26, film her taking a virtual Nofar Method pilates class in her living room

The model ended her post with a dose of perspective for those wishing they had her toned abs and trim figure.

‘This is where I like to adhere to the French way of celebrating beauty — accentuate your luck! And true confidence? Accentuate your flaws! ( I’m not there yet.)’

Paulina had posted the photo of her abs on Wednesday to make fun of the old sports bra and sweatpants she was wearing.

‘How about a super comfy sports bra and a pair of polyester sweatpants someone left here by accident for today’s fashion. Killing it, aren’t I?!’ she joked, adding that her pigtails were once ‘space buns’ that have come undone.

However, her Instagram followers were more focused on her ripped figure, with dozens of people praising her physique in the comments. 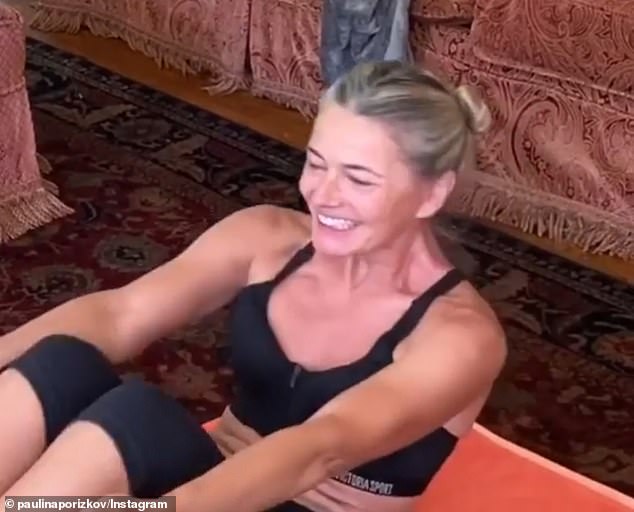 Grin and bear it: ‘I dare YOU not to develop a six pack if you can follow her class,’ Paulina wrote when she captioned the clip 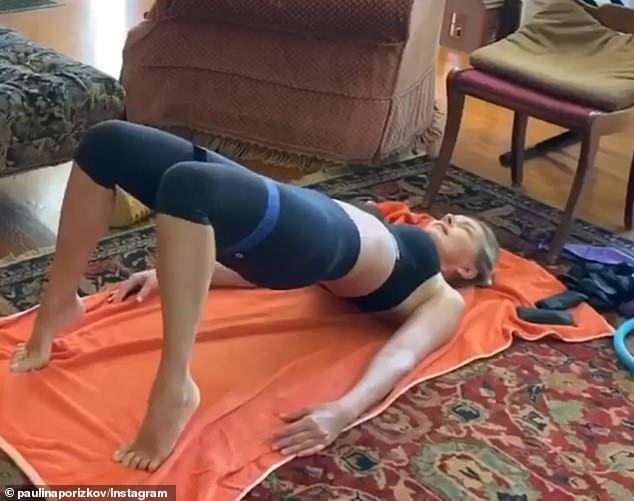 Fun: The Sports Illustrated star noted that the workout is ‘super hard,’ but it never gets boring 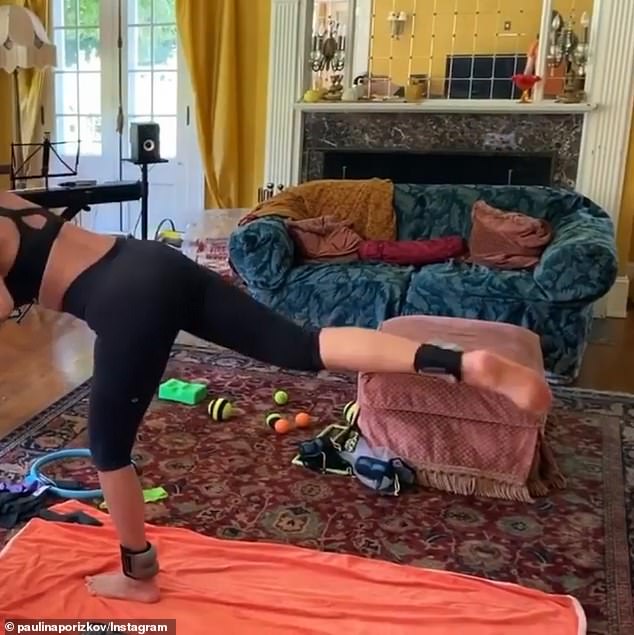 Not bad: Workouts that are touted by celebrities are often out of the average person’s price range, but one virtual Nofar Method class costs just $16

‘You could seriously wear a garbage bag and still be stunning! Those abs are GOALS!!!’ one person wrote, while another agreed: ‘All I see is abs, babe.’

One person asked the model how she maintains such a trim figure, admitting that she struggles to keep in shape ‘over 40.’ 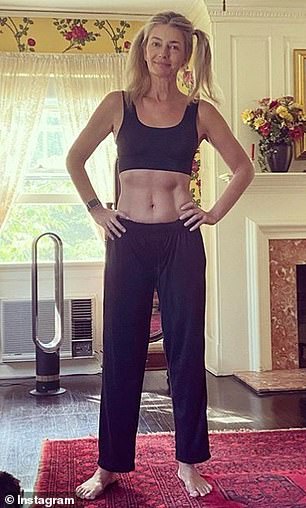 Inspiration: Paulina posted this photo to make fun of her outfit, but fans were capitvated by her toned abs

‘Ok, how do you get those abs?? Over 40 is hard enough. What am I doing wrong,’ the Instagram user commented, prompting another to add: ‘Wondering the same thing. Clearly, I lost the lottery in the gene pool.’

Before she posted her pilates video, Paulina previously revealed in another Instagram post that she relies on a mix of pilates, dance, and cycling in order to stay in tip-top shape.

Last week, the model shared a candid photo of her face, while opening up about how she maintains such youthful looks without the help of any Botox or filler.

‘Ok folks. Once again, unretouched and unfiltered,’ she wrote. ‘I am 55, this is good light and a fairly flattering — if plain — photo.’

Paulina then went on to share the non-invasive treatments she relies on to keep her skin looking wrinkle-free, explaining that she does not get, and has never had, Botox or fillers.

Instead, undergoes a mix of Ultherapy and Plasma Pen procedures, both of which she had done earlier this month.

Ultherapy tightens the skin with the help of high-intensity focused ultrasound waves. 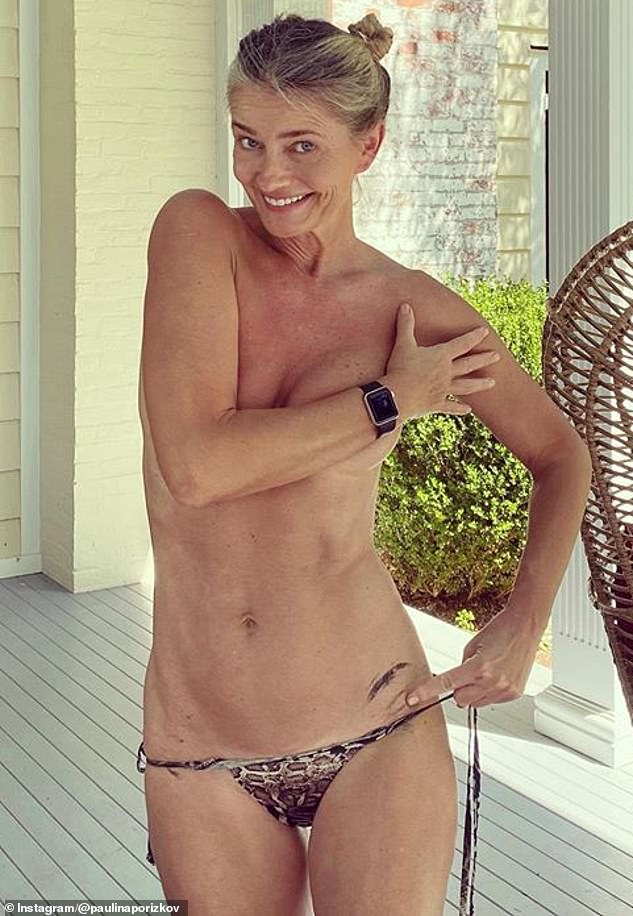 Confident: The fashion star has showed off her enviable figure in a series of candid shots throughout quarantine, including several topless swimwear photos 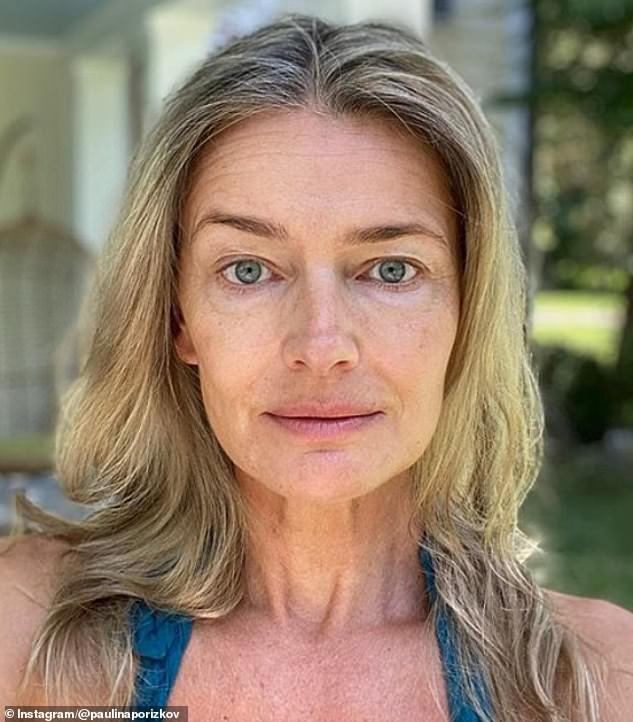 Candid: Last week, Paulina shared an ‘unretouched’ and ‘unfiltered’ selfie while opening up about the secrets behind her youthful looks

Treating large areas like the face and neck together can cost upwards of $4,000 to $5,500 in New York City, according to Today. But the results are said to subtract years off the skin’s appearance.

Meanwhile, the Plasma Pen is effective in reducing wrinkles while also lifting and tightening the skin.

The device ‘transmits nitrogen plasma energy to deliver soft-surgery plasma fibroblasting deep into the skin,’ according to one plastic surgeon’s website.

Pricing starts at $400 and varies based on treatment area and location.

‘I have had Ultherapy 5 times now, and two plasma pen treatments. No Botox, no fillers,’ Paulina shared in her Instagram post.

She said she also tries to live as ‘clean’ as possible, although she admitted that she still indulges in alcohol and sweet treats. 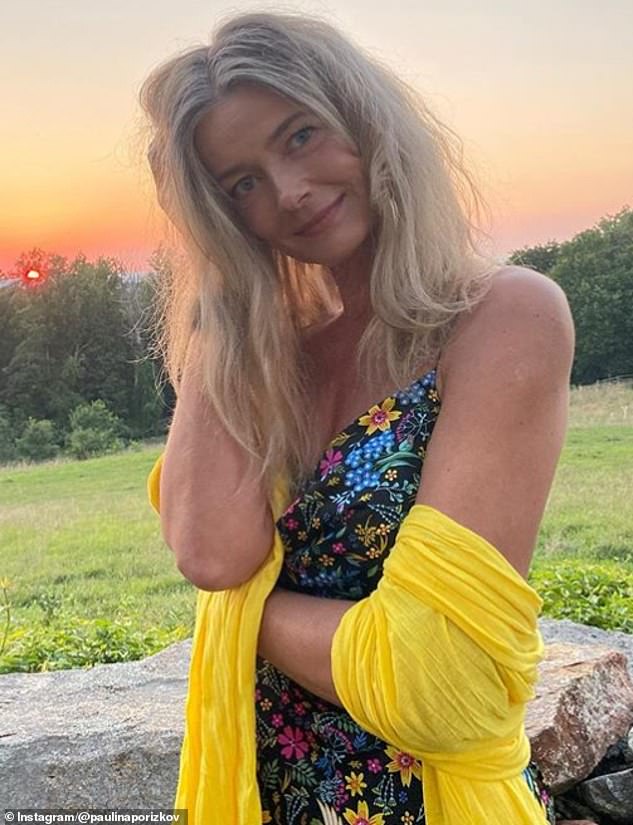 Emotional: The mom-of-two confessed that she doesn’t not always feel confident in her appearance, admitting that ‘more often’ than not, she is ‘totally insecure’ 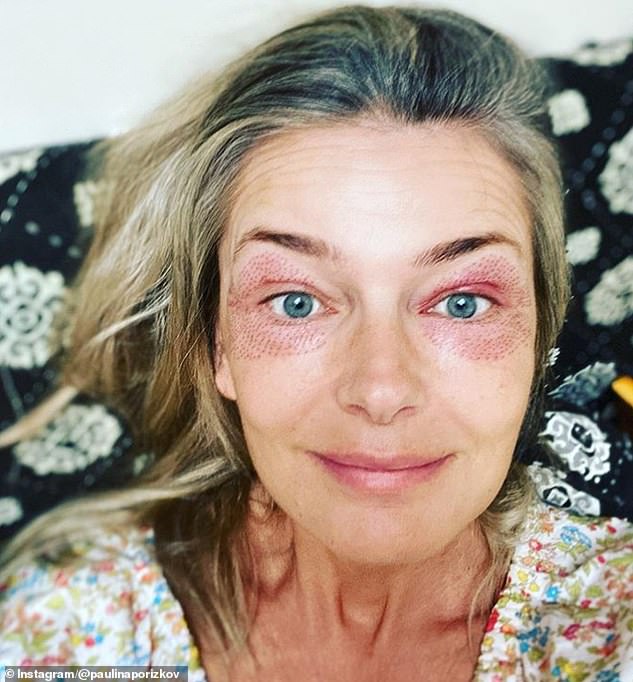 Tried and tested: Paulina has never had Botox of fillers, but she does rely on non-invasive treatments like Ultherapy and Plasma Pen (which leaves her with red dots around her eyes)

Paulina confessed that she spent years of her life as a smoker, a habit that she maintained until she was 40.

She placed at least some of the blame for the unhealthy vice on her late husband, The Cars frontman Ric Ocasek, whom she says was an ‘unapologetic smoker.’

‘I live reasonably clean — don’t much enjoy processed foods, but love a variety and do love my cakes,’ she wrote.

‘I drink wine and cocktails. I smoked until I was forty. (Sorry to say. Of course I quit when pregnant and nursing — but my husband was an unapologetic smoker — and it was easier to do as he did instead of fighting about it.)’

When it comes to keeping in shape, the mom-of-two said that she works out regularly, explaining that she ‘tries for at least three [times] a week.’

Paulina then drew attention to the unfair expectations placed on women to look flawless and ageless as they grow older, pointing out the fact that she has ‘wrinkles’ and ‘sagging.’ 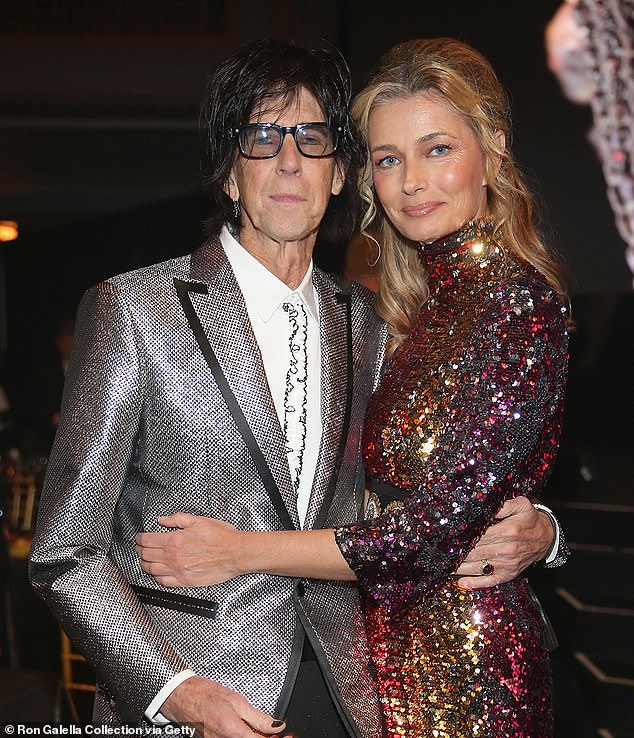 Bad habits: The mother-of-two confessed that she smoked until the age of 40, noting that her late husband, The Cars frontman Ric Ocasek, was an ‘unapologetic smoker’ 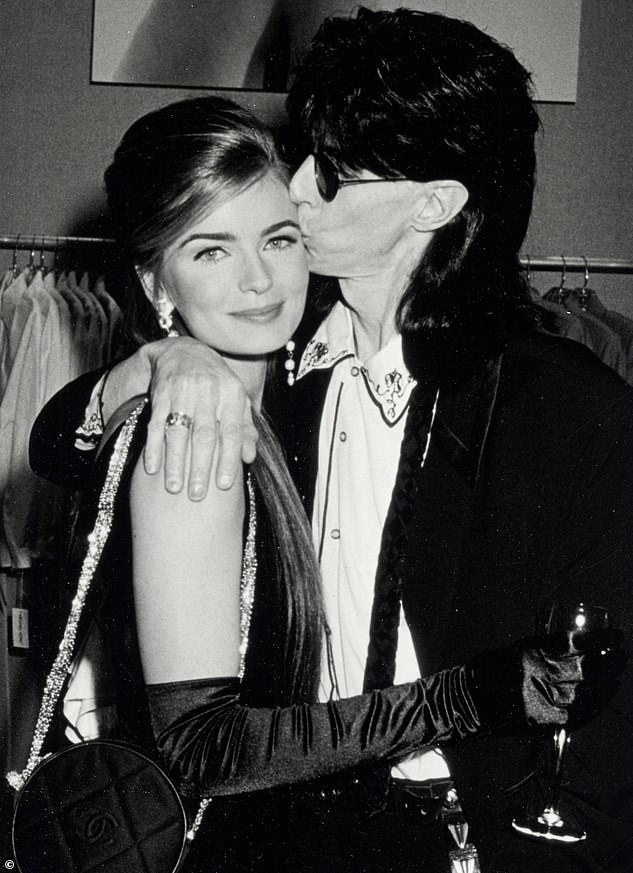 Memories: Paulina met Ric while his band was filming a music video in 1984 and became his third wife in 1989. He passed away on September 15 at the age of 75

‘Sure, I have wrinkles. (My iPhone camera graciously omits them in good light). Sure, I have some sagging. (This is the part I’m not THAT fond of),’ she wrote.

‘Any woman today who doesn’t look her age has enjoyed a rarefied existence of not only a great diet and exercise, but also medical benefits. There is absolutely nothing wrong with that. We, who can, are so lucky to do. But I do wish we could be more honest and open about it.

‘Because no, I cannot look 39 with just a great diet and exercise.’

Despite her candor about her appearance, Paulina admitted that she doesn’t always feel confident in her looks, explaining that ‘more often’ than not, she is ‘totally insecure’.

‘I truly appreciate many elements of maturing; I’m so much smarter, kinder, more patient, funnier, better at communicating, more self aware and overall — a much better person,’ she shared.

‘But really —I am NOT always ok with the way my age reflects in my face and body. I have days of self confidence and a f**k-off-if-you-don’t-like-it attitude, but more often I’m just totally insecure, and do selfies of myself in horrible light and unflattering angles, so I can get used to how I actually do look.

‘And it’s painful. It’s like building calluses on your fingers when you learn to play the guitar. It’s a process. But it’s what happens if you are lucky to be healthy and alive.’