Paulina Porizkova, 55, shows off her abs in a string bikini

Paulina Porizkova showed off her figure in a 12-year-old string bikini while cleaning out her pool, which happens to be filled with green water.

For her latest #wednesdaywearables picture, the 55-year-old model took to Instagram to share a snapshot of herself wearing a tiny animal-print bikini top, a towel around her waist, and rubber gloves.

‘Back to what I REALLY look like, guys. My bikini is about twelve years old — it’s supposed to be a tan-thru but so far it still gives me tan lines,’ she captioned the image. ‘The towel is from the A@P supermarket about eight years ago.’

Just a normal day! Paulina Porizkova, 55, shared a photo of herself wearing a 12-year-old string bikini to clean out her green pool with a slotted spoon on Wednesday 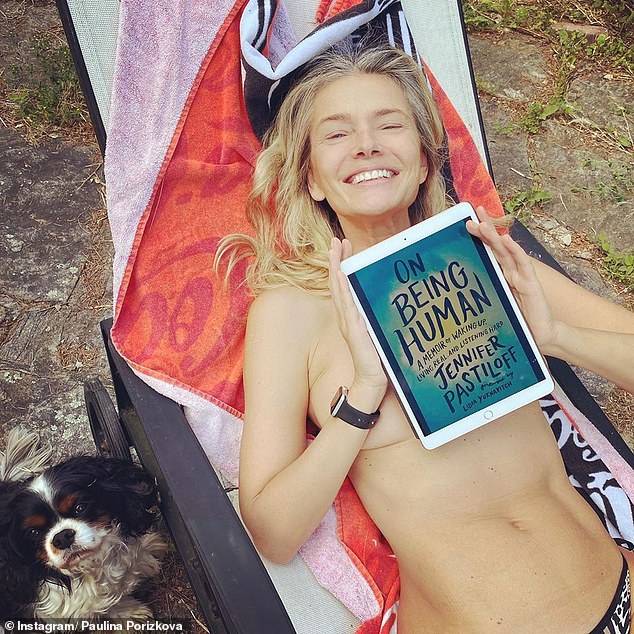 Same look: A little over a week ago, she shared a snapshot of herself sunbathing topless while wearing the matching animal print bottoms

Paulina’s hair is pulled up in a messy bun and she is holding up a slotted spoon that she was using as a makeshift pool skimmer.

‘I’m holding a slotted spoon to clean the skimmers in the pool, which has gone a lovely shade of green because the filter doesn’t work and I can’t get it replaced this year,’ she explained.

‘But I have a pool. A lovely, amazing pool which has seen so much joy in years past — all the kids in our family practically living in it all summer,’ she added. ‘This summer is a lonely one, so, so what if the pool is more of a pond. (And yes, we tried to fix the Aquabot, but gave up and it been sitting there for two weeks now.)

‘I swim in it even though it’s green. Hopefully building immunity.’

A little over a week ago, she shared a snapshot of herself sunbathing topless while wearing the matching animal print bottoms.

She used her iPad — which showed the cover of the book she was reading — to conceal her chest. 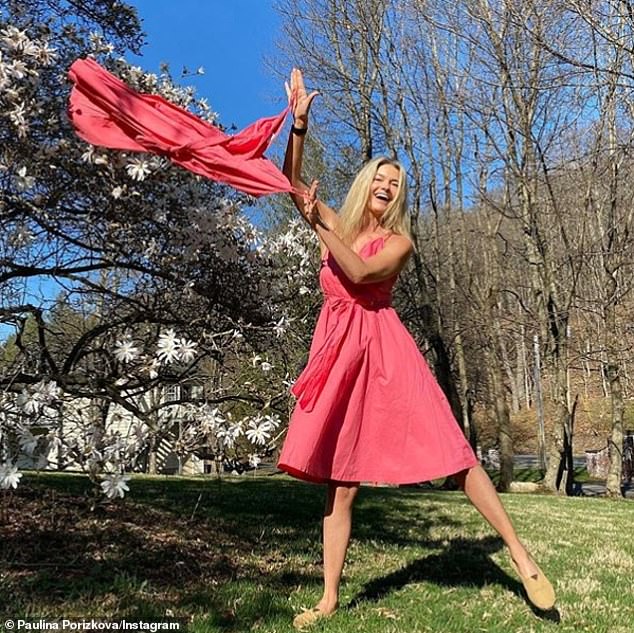 Excited: On Tuesday, Paulina celebrate the Gap bringing back her favorite pink dress, which she has been wearing for the past 20 years 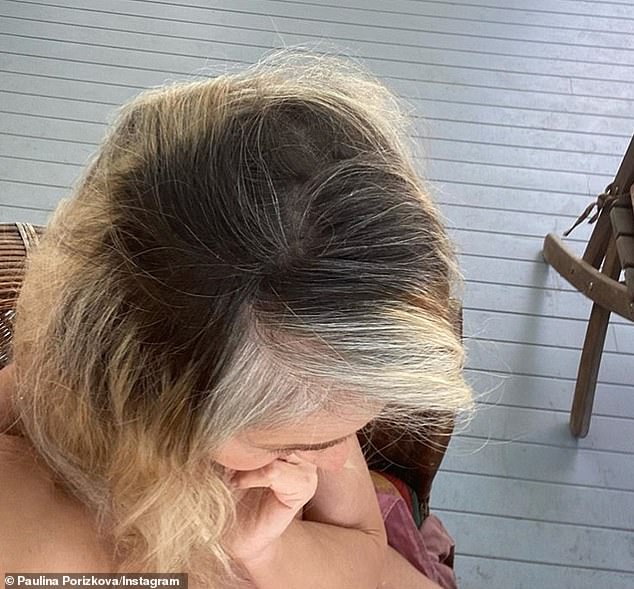 Pandemi hair: Earlier this week, she shared a close-up image of her hair, which is now a mix of blonde, brown, and gray after going months without dying it

While the image was certainly light-hearted and fun, Paulina delved into more serious topics in the caption, opening up about aspects of the book, On Being Human by Jennifer Pastiloff, that she identified with most.

‘This book has just hit the bookshelves as a paper back,’ she captioned the cheeky snapshot. ‘And let me tell you, Jen knows all about being human. About being a girl who needs love and is so full of self doubt and insecurities she can’t find it. (Sounds familiar). And how this girl can go on — by first forgiving herself. (Still working on that).’

The day before she posted her latest bikini picture, she shared a photo of herself modeling a bright pink summer dress, revealing the Gap had brought back her go-to frock, which she has been wearing for the past two decades.

‘I’ve been wanting to share this with you for months now!’ she wrote. ‘But the world suddenly became a different place; there was a lot of learning and for many, suffering. Hardly a cause for celebration. But I must admit, this brought me a glittering moment of joy. Often, in the midst of world shattering events, we take our little happiness where we can.

‘Now that I’ve admitted it — may I PLEASE enjoy this moment with you? My GAP dress! They went back to the archives and resurrected it! If you are one of my Insta friends, you know exactly what I’m talking about.

‘My dress. The dress that has been my solid friend for twenty years. It has gone on every vacation with me, it has witnessed all my joys and sorrows. And, it was still holding up — sort of. There are endless posts of me in my dress, in fact, most of my friends started to refer to it as the “Paulina.”‘ 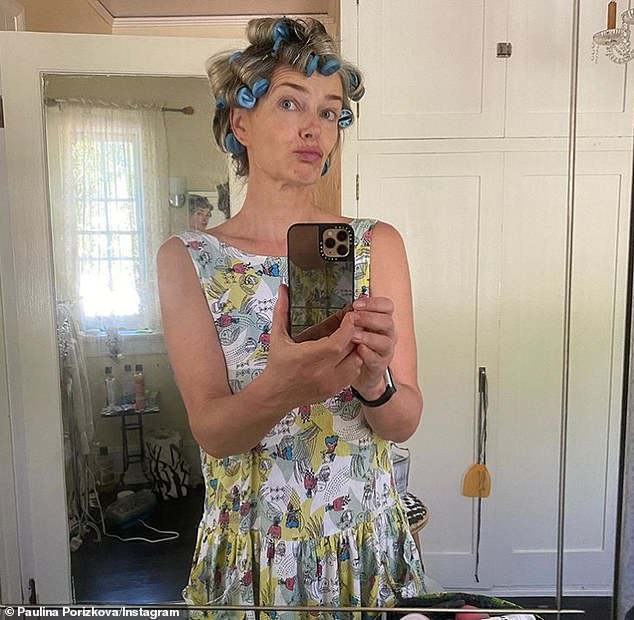 Keeping it real: Paulina has been posting a mix of sultry bikini pictures, throwback photos, and snapshots of herself sporting messy hair and comfy clothes while quarantined in her home 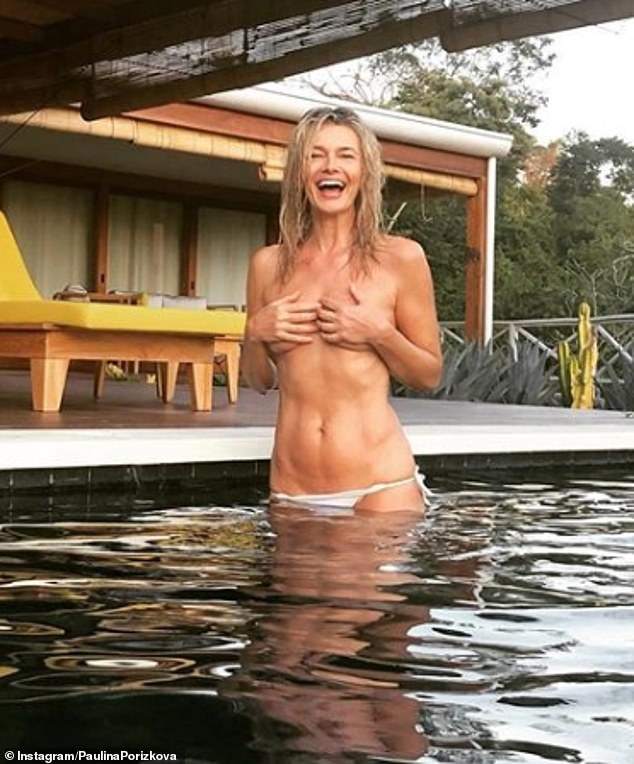 Stunning: Paulina has also been sharing a number of throwback photos from her pre-pandemic vacation in Costa Rica and Nicaragua

The Sports Illustrated Swimsuit star has shared numerous posts about her beloved dress over the years. A Czech journalist even wrote a blog post about all the times she had worn the frock, and when she was worried it might fall apart, a friend on Instagram found it on eBay and bought it for her.

‘And now, holy cow of all cows, anyone including me can buy one! Needless to say, @gap has provided me with, I think, a lifetime supply,’ she shared with excitement.

‘Thanks to them you’ll be seeing me in the same damn dress for as long as you chose to visit my Insta house. And most importantly, THANKS TO YOU, my INSTAFRIENDS, who made this happen!!!!! YOU ARE POWERFUL AND AMAZING. I’m so so so deeply grateful to you all.’

Paulina has been posting a mix of sultry bikini pictures, throwback photos, and snapshots of herself sporting messy hair and comfy clothes while quarantined in her home in upstate New York over the past few months.

Earlier this week, she shared a close-up image of her hair, which is now a mix of blonde, brown, and gray — much to her surprise.

‘Here is my tricolor hair in its full glory,’ she wrote, explaining how many of her fans commented that she ‘should go gray.’ 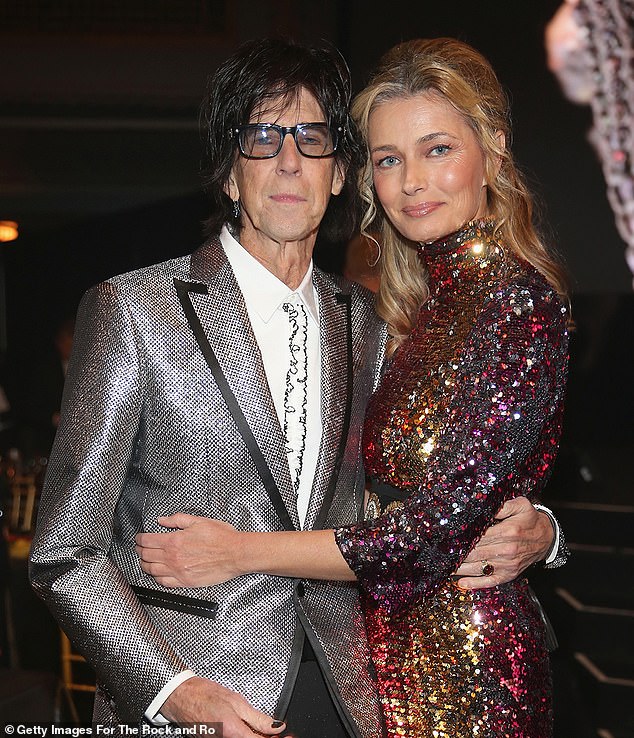 Memory: Paulina has been morning the death of her estranged husband Ric Ocasek, who passed away on September 15 at the age of 75 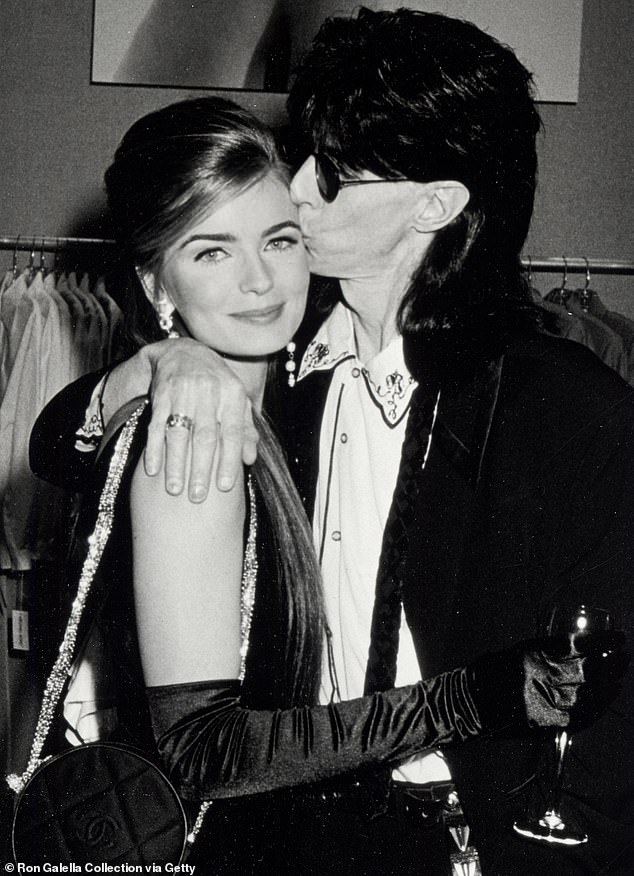 Memories: Paulina met The Cars frontman while the band was filming a music video in 1984 and became his third wife in 1989. They had two sons together, Jonathan, 26, and Oliver, 22

‘The thing is, that’s why I went blonde! So I could transfer over!’ she noted. ‘Only to find out that all my hair is brown save a strip in the front. So now what?

‘I also should mention that dying it all brown is probably my least favorite option, because it makes it look like a helmet AND it’s now sort of too dark for the rest of my face.’

It’s been a difficult few years for Paulina, who has had to mourn both the end of her marriage and the death of her estranged husband Ric Ocasek.

She had announced in May 2018 that they had split quietly the previous year after 28 years of marriage. Though they were divorcing, they continued to share a New York townhouse and that is where Paulina found the famed rock star dead.

A medical examiner determined that the musician died on September 15 at the age of 75 from hypertensive and atherosclerotic cardiovascular disease with pulmonary emphysema being a contributing factor.

Since his passing, Paulina has been incredibly open about her struggle to process her emotions about his death.

Paulina met The Cars frontman while the band was filming the music video for Drive in 1984 and became his third wife in five years later. They had two sons together, Jonathan, 26, and Oliver, 22.