Pauline Hanson is calling for online betting firm Lottoland to be banned because the firm is ‘killing Australian jobs’.

The One Nation leader will call on both sides of parliament to ban the online betting site to prevent Australian jobs from being lost to foreign-owned firms.

‘This is about standing up for Aussie jobs and Aussie small business,’ she said.

‘This is about standing up for Aussie jobs and Aussie small business,’ Senator Hanson said

The Queensland senator said she would visit a newsagency in Wynnum, in Brisbane’s east, on Tuesday to deliver her message.

‘Australian newsagencies are facing huge losses because the government is allowing Lottoland to continue cutting into their profits, but I want them to know they have my full support,’ Senator Hanson said.

‘You do the math,’ she said about the discrepancy.

‘Newsagencies are small mum and dad operations that are often at the centre of local communities. The Government is crazy if they keep letting Lottoland decimate our news agencies.’ 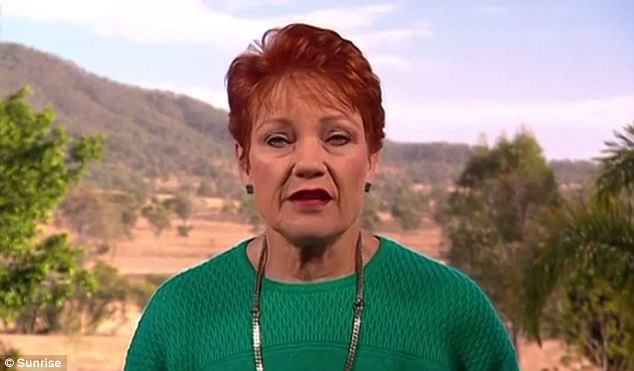 Senator Hanson said newsagencies were ‘mum and dad operations’ at the centre of local communities – and employed 20,000 across Australia while Lottoland had just eight

Lottoland has offices in Darwin and Sydney but is based in Gibraltar, a headland on Spain’s south coast

Senator Hanson’s One Nation party tried to move an amendment to outlaw the practice of betting on the outcome of lotteries in March.

Ms Hanson said she was ‘disappointed’ when the legislation was voted down by both sides of Parliament but she was ‘not going to give up’.

‘I have continued to speak to the both side of politics about the need to ban Lottoland, and I won’t stop speaking out about this until laws are in place and Australia’s news agencies are safe,’ she said.