‘Kids are like dogs’: Pauline Hanson compares raising children to ‘training’ pets – and admits to giving her kids a ‘clip over the ear’ if they misbehaved

Pauline Hanson has compared raising children to training animals, saying there are similarities to teaching discipline to both pets and babies.

The One Nation leader told The Today Show on Monday that she agrees with reports coming out of the UK that suggest parents should ‘train’ babies as they would a dog.

‘Kids are like dogs… you actually look after them, treat them well, give them that love and care and attention,’ she said.

Her comments amused host Georgie Gardner, who said she was reluctant to end the segment.

‘Pauline, I loathe to interrupt because I’m scared I’m going to get in trouble but we have to go now,’ Gardner said.

‘Its been enlightening and everyone is awake across the country and terrified of you.’

The controversial new British television show is hosted by behaviourist Jo-Rosie, and follows her applying the same techniques as she would to train an animal with a three-year-old child.

Ms Hanson said the technique would get results, and commented on her own disciplinarian ways when raising her five children.

Radio host Neil Mitchell, who was also contributing to the show, was shocked that she confessed to hitting her children.

‘You can’t hit dogs, let along children,’ he said.

‘The problem today is parents aren’t allowed to discipline their kids. We are losing respect, they lose respect for authorities,’ she said.

Just as she was beginning to get into her argument, Gardner put an end to the conversation, saying the segment needed to be wrapped up.

The concept comes after a rise in popularity of keeping toddlers prone to running off in public on leads. 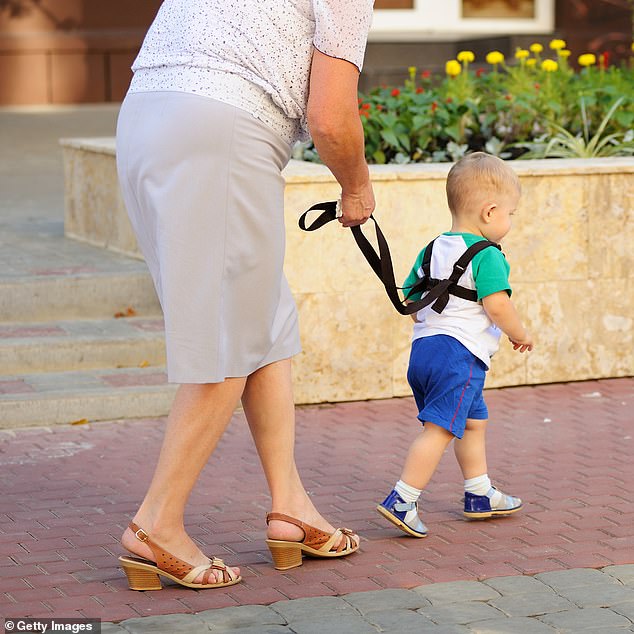