Pauline Hanson has launched a withering attack on Today Show host Deborah Knight, saying she is to blame for the show’s poor ratings following the sacking of Karl Stefanovic.

Her spray was prompted by Knight asking her about One Nation’s falling support ahead of Saturday’s Federal Election.

‘The latest Newspoll, it shows support for One Nation collapsing to four per cent, on par with Clive Palmer’s party,’ Knight said.

‘In light of all the things you’ve faced, all the scandals, all the things that have been going on, can you really blame people for having their doubts about One Nation and considering Clive over you?’

Pauline Hanson has attacked Today Show host Deborah Knight, saying she is to blame for the show’s poor ratings following the sacking of Karl Stefanovic

But the Queensland Senator didn’t miss a beat as she hit back at Knight, attacking both the show’s ratings and Knight’s performance in Stefanovic’s position.

‘I’ve actually gone up since the last election, unlike your show, Deb, since you have taken over you have gone down in your viewership,’ Ms Hanson said.

Knight appeared shocked by the attack, to which she defended by saying she wasn’t attacking Ms Hanson and her party personally, but just doing her job.

‘It is my job to ask you questions that I think, as a journalist, I’m doing,’ Knight said.

‘I’m putting facts to you that that is what the Newspoll is showing, and obviously the polls have been wrong in the past, which is what you are indicating.’

Knight was shocked by the attack, to which she defended by saying she wasn’t attacking Ms Hanson and her party personally, but just doing her job

The show shared a clip of the personal attack to their Twitter account, before it was quickly deleted just minutes later.

The Today Show’s viewership has plummeted since the the departure of Stefanovic, despite hopes of regaining some of the audience this year.

During its debut with a new lineup in January, the breakfast show was smashed in the ratings by Channel Seven competitor Sunrise, drawing in just 197,000 metro viewers.

In March the Channel Nine flagship program was seeing promising figures with 264,000 metro viewers – however, it was significantly less than Sunrise’s 447,000 viewers at the time. 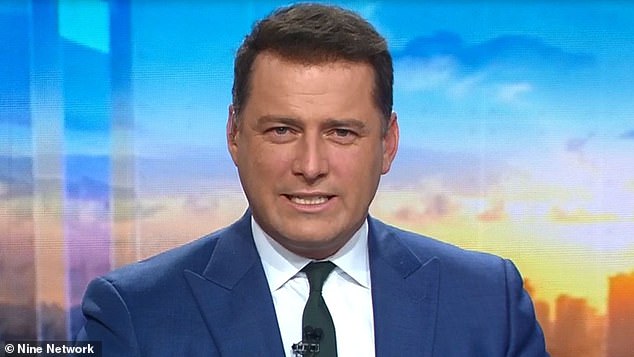 The Today Show’s viewership has plummeted since the the departure of Karl Stefanovic (pictured), despite hopes of regaining some of the audience this year

At the time, TV Blackbox Editor Kevin Perry said audiences needed time to familiarise themselves with the new cast, but the figure was concerning for management.

‘Most worrying for Nine is the fact despite two weeks of broadcasting from Melbourne, and the addition of Tony Jones to the cast, viewers in Melbourne are clearly rejecting Today,’ Mr Perry said.

‘There is a real perception problem that this is a Sydney show that only reports Sydney news.’

‘Nine have made changes to the cast, the problem is they haven’t gone far enough, Georgie Gardner lacks warmth in the hosting role and there is a perception from some viewers that she has stabbed Karl Stefanovic in the back’

‘Nine had the opportunity to completely reboot Today with new people and they failed to take that opportunity.’