Unvaccinated senator Pauline Hanson has tested positive to Covid-19 and will be forced to remain in isolation just days before the federal election.

Symptoms developed last Friday, but testing did not return a positive result until Saturday.

‘I will self-isolate in accordance with the current rules, and do my best to drive One Nation policies from home ahead of this weekend,’ Senator Hanson said.

‘I thank all of those people who have sent their well wishes, and apologise to those who had hoped that I would drop dead.’

The Senator revealed the news on KIIS FM this morning.

‘I travel the five states around the whole of Australia campaigning but I go to the most locked-down state, last week, to Western Australia, and I got it,’ she said.

Senator Hanson revealed she’s still not vaccinated and her symptoms haven’t been bad.

‘I’ve told you that before before, I’m not getting vaccinated,’ she told the Kyle and Jackie O Show.

Last year, Hanson slammed the vaccine saying she would not be ‘putting that s***’ into her body before taking aim at the World Health Organisation.

The One Nation leader launched into the extraordinary anti-vaccine rant during a ‘business for choice’ event.

Ms Hanson stood in front of the forum and declared she refused to get vaccinated before trashing peak international organisations for pushing a vaccine agenda.

‘I’ve taken that stance and that is my choice,’ Ms Hanson continues. ‘I am not an anti-vaxxer, but I am very careful of what I put into my body.’

Ms Hanson told the audience she had maintained a healthy lifestyle and that she believed she would be jeopardising her health by getting the jab.

She then launched a scathing attack against the United Nations and World Health Organisation and accused the international organisations of pushing an agenda.

‘I don’t intend to listen to bureaucrats or politicians, or UN or WHO pushing their own agenda and take away my freedoms, my rights, my choices when that’s why I’m fighting this issue and so should you,’ she said.

Ms Hanson has been a vocal opponent to the vaccine and tried to ban jab mandates after attempting to move a bill in the Senate last November.

‘This legislation is urgently needed to arrest and reverse the pandemic of discrimination which has been unleashed on the Australian people,’ she said.

The Federal Government insists the Covid vaccine is optional but state and territory governments as well as private companies have enforced vaccine mandates,

Ms Hanson introduced a bill to over-ride the states and ban all vaccine discrimination last year, but it was rejected despite support from five Coalition senators.

‘The Prime Minister is weak, he says there should be no vaccine mandates – then do something about it,’ she said.

Prime Minister Scott Morrison told reporters the bill would have ‘threatened funding for hospitals and schools’ and seek to ‘centralise power more in Canberra’ which the Coalition had traditionally opposed.

‘I respect the fact that individual members will express a view and vote accordingly and that’s what’s happened today.’

Despite Ms Hanson being a strong opponent of vaccines, her views are in stark contrast to the majority of Australians, which has one of world’s highest vaccine rates.

‘Australia has been one of the standout performers in managing COVID anywhere in the world,’ Chief Medical Officer Paul Kelly explained.

However booster take-up in NSW and Victoria has fallen behind schedule and experts suspect it is because of the large numbers of Covid cases, delaying the booster rollout, with many unsure when they should get the third jab after getting infected.

Omicron symptoms disappear in half the time of the common cold, provided the sufferer has had a Covid booster shot, a new study has shown.

Scientists at King’s College London studied 62,000 vaccinated people during the Omicron outbreak in the UK and found remarkable differences in recovery times depending on how many doses they had received.

Those who were triple jabbed reported symptoms that lasted an average of 4.4 days, compared to 8.3 days for those who had received two vaccinations.

That was about half the time of symptoms from the common cold, which lingers for seven to ten days.

For those with a booster, Omicron infection was 3.3 days shorter than a Delta infection, which lasts for 7.7 with a third dose or 9.6 days for the doubled-jabbed.

The findings indicated both that the Covid virus was evolving to be less virulent over time, and also that getting a booster drastically reduces the symptomatic period.

‘Every time you boost immunity, even if it is not enough to stop infection, it helps you get over symptoms faster,’ Professor Catherine Bennett, told the Daily Mail Australia.

‘But it also makes sense that it would clear the infection faster which means if you get vaccinated you won’t have to put up with it for the same time.’

Professor Bennett said research shows the risk of catching Covid is also halved after having a booster shot.

Professor Bennett said the UK has been leading many studies into Covid-19 through out the pandemic as they have strong systems in place to conduct population based research.

While infection and immunity rates – through vaccination or catching the virus- previously varied significantly between countries, the worldwide spread of the more contagious but less virulent Omicron has made medical findings relatable across the globe.

‘Now that we have had Omicron in every state and territory, we start to look more like the UK, and it makes their immunity information comparable to Australia.

‘This research shows that booster are worth it. Even if you aren’t likely to have a serious infection, Covid isn’t pleasant to get.

‘But if you have a booster, you halve the infection risk, are less infectious, have shorter symptoms, and your symptoms are more mild.’

More than 6.45 million Australians have already contracted the virus, with more than five million of them becoming infected this year alone, according to Medical Journal of Australia publication InSight.

The Australian Bureau of Statistics data released on Wednesday that of 5940 virus-related deaths recorded to 30 April, almost 90 per cent (5335 deaths) had COVID-19 as the underlying cause.

The number of deaths has ramped up this year with 3107 recorded, which is more than double last year’s virus-related deaths (1322).

The ABS death toll was sourced from the civil registration system and is not directly comparable with data from the various state and territory health departments.

Almost 60,000 new cases of COVID-19 and 53 deaths were reported nationwide on Wednesday.

People who’ve had a booster jab are 93.4% less likely to die from Covid than the unvaccinated, major real-world study finds

People who have been triple-vaccinated against Covid are 93 per cent less likely to die from the virus than the unjabbed, latest official figures show.

A report by the Office for National Statistics (ONS) looked at 70,000 coronavirus deaths in England between July and December 2021.

Adjusting for age, statisticians found having two doses also reduced the risk by 81 per cent during the same period.

The period does not cover the full Omicron wave, which may influence the findings. The new variant has made two doses significantly weaker, but Omicron itself is much milder than past strains.

In the ONS report, people were classified based on how many jabs they received and whether there had been more or less than 21 days since their last dose.

The risk of dying was consistently lower every month from September for people who had a booster since third doses started being rolled out. 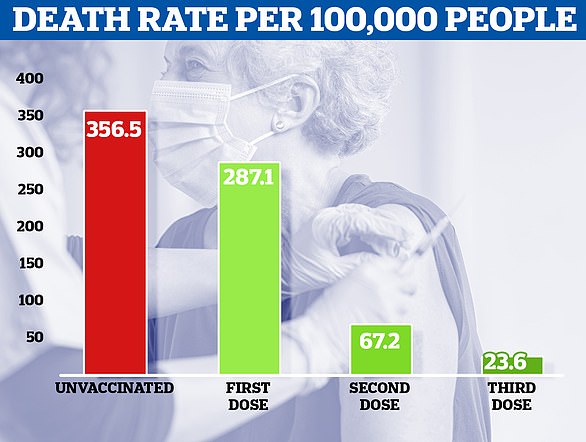 Covid vaccine booster doses reduced the risk of dying with the virus by 93 per cent in the six months up to December, Office for National Statistics (ONS) figures showed today. The death rate was 23.6 per 100,000 for the fully boosted between July and December last year, 93.4 per cent less than the 356.5 per 100,000 rate in the unvaccinated during the period.

ONS statisticians looked at all of the more than 69,000 people aged 10 or over who died with Covid in England last year to calculate their risk of dying based on how many doses they had.

For much of 2021, mortality rates for death involving Covid for people who had received two doses of vaccine remained well below the equivalent figures for people who were unvaccinated, the ONS found.

This may have been driven by a change in the composition of the double-jabbed group, with most older people having received a booster or third dose by this point, the ONS said.

It might also be connected to ‘waning protection from prior vaccination’.

They found the rate was 462 per 100,000 in people not vaccinated during December, when Omicron caused a surge in cases across the country.

The rate was nearly six times higher in the double-jabbed compared to their six-month death rate from July to December, which was 67.2 per 100,000.

Experts warned Omicron’s slightly higher vaccine escape and waning immunity from the second dose would result in more deaths if people did not get their boosters at the time.

Mortality rates should not be taken as a measure of vaccine effectiveness, the ONS stressed.

The figures have been adjusted to account for differences in age and population size, but there may be other differences between the groups, such as underlying health issues, that could affect mortality rates.