And lead actor Cillian Murphy was seen cutting a brooding figure as he got into character while strolling before cameras on the set in Manchester, on Thursday.

The actor, 44, transformed into Tommy Shelby as he stepped out in the city’s Castlefield area, where he was seen exiting a Chinese business.

Making his way across a bridge as he walked away, the star looked dapper in a grey three-piece suit, which he teamed with a patterned tie and crisp white shirt.

Cillian wore a black longline coat over a stylish three-piece suit that he teamed with a crisp white shirt, which he wore buttoned up and without a tie.

Sporting a grey cap, the actor carried a large black leather bag, while he rounded out his retro look with a pair of polished black boots.

The day before, the screen star was seen shooting scenes with newcomer Amber Anderson on the streets of Manchester. 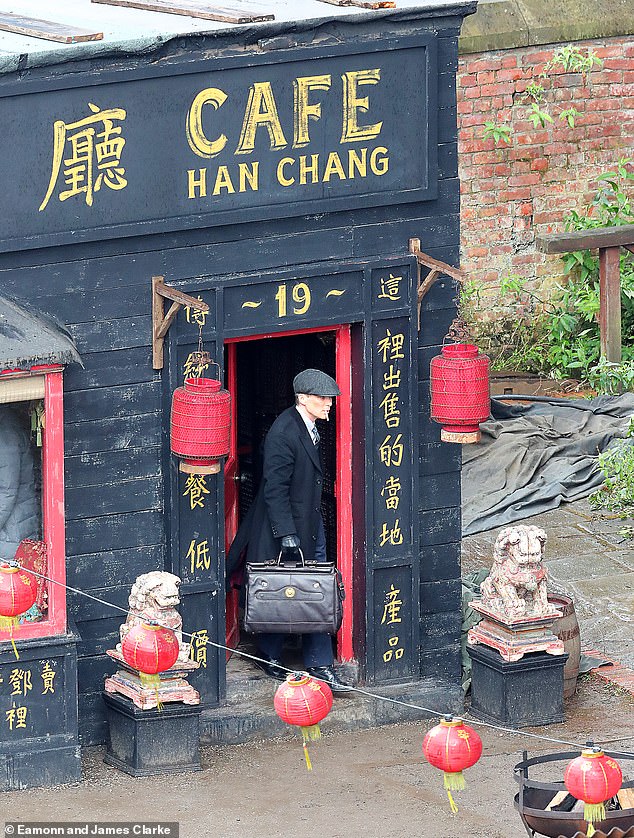 Getting into character: The actor, 44, transformed into Tommy Shelby as he stepped out in the city’s Castlefield area, where he was seen exiting a Chinese business

He said: ‘There’s a great female character who is new, who is pretty dark.

‘I haven’t seen a character like her in Peaky before. I won’t say who she is, but she certainly gives Tommy a run for his money.’

Their outing on set follows reports the cast and crew were told to continue filming after someone tested positive for COVID-19, insiders claim.

Work on the sixth season of the hit BBC drama, set in Birmingham, was temporarily paused due to ‘a false positive test for a member of the crew’.

The person then took an NHS COVID test which came back negative – allowing filming to officially resume as per official protocol, a spokesperson said.

But crew members claim filming continued for several hours when the first test came in.

Union Bectu is now investigating after workers felt their health was put at risk, The Guardian reports.

At the time, a show spokesperson told MailOnline: ‘Filming was stood down on Peaky Blinders because of a false positive test result for a member of the crew.

‘In line with protocol, this person took an NHS test and anyone who came into contact with them self-isolated – the safety of our team on Peaky Blinders is of paramount importance.

‘The NHS test has come back negative and filming will resume as normal tomorrow.’

The show’s official Twitter account released a statement saying: ‘After much consideration, and in light of the developing situation concerning Covid-19, the start of production of Peaky Blinders Series 6 has been postponed.

‘Huge thanks to our incredible cast and crew, and to all our amazing fans for their continued support.’

The series later resumed filming series six, which will be the show’s last, in January.

The cast recently filmed for the first time since former co-star Helen McCrory passed away from cancer aged 52.

Late actress Helen, who played Aunt Polly on the crime drama, was recently honoured by the programme’s showrunners.

‘As a person she was off-the-scale charismatic, and deeply caring. We feel so privileged to have worked with her over the last decade. All our thoughts and love are with Damian and family.’ 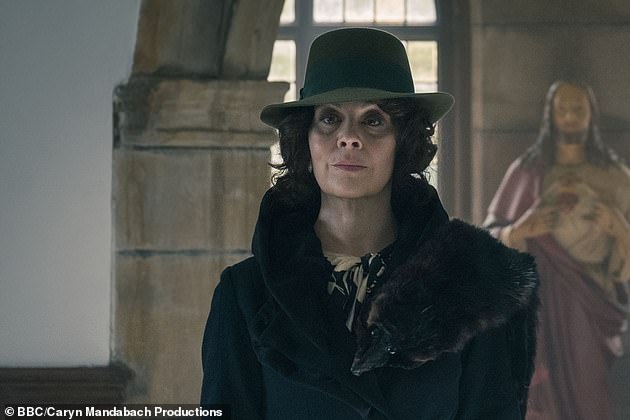 Iconic: The cast recently filmed for the first time since former co-star Helen McCrory (pictured in character as Aunt Polly) passed away from cancer aged 52