Two turkeys pardoned by Donald Trump on Tuesday are living out the rest of their days at Virginia Tech’s Gobblers Rest.

The birds, named Peas and Carrots, have a new lease on life thanks to annual presidential pardon tradition. This is the third year in a row that the National Thanksgiving Turkey and its wingman are making their home at Virginia Tech.

They will receive round the clock care surrounded by experts in the university’s poultry program.

Virginia Tech professor Rami Dalloul told 10News:  ‘First, they’re going to get free college education and they will live in their dorms.

Peas and Carrots, the Thanksgiving turkeys pardoned by Donald Trump, have made it to their new home at Virginia Tech 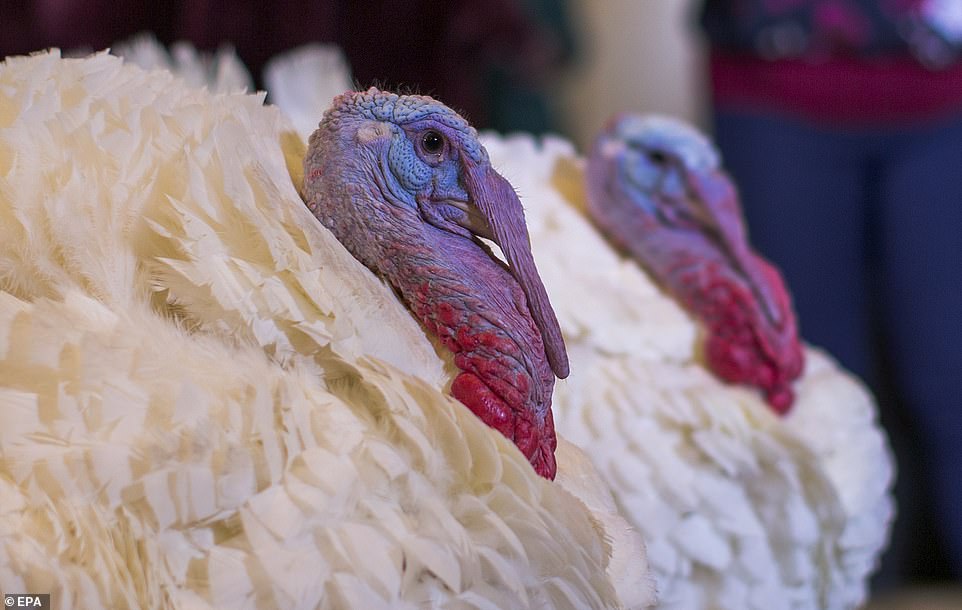 Peas and Carrots will get round-the-clock care surrounded by experts in the university’s poultry program.

‘Except they’re exempt from classes. They don’t have to go to classes,’ Dalloul said.

Every year, thousands of people come to see the local celebrities in their new home.

The public is invited to an open house to meet the turkeys on Friday from 11am to 5pm at the Livestock Judging Pavilion: 445 Plantation Road, Blacksburg.

On Tuesday Donald Trump used his presidential pardoning power to grant mercy to Peas at the White House. 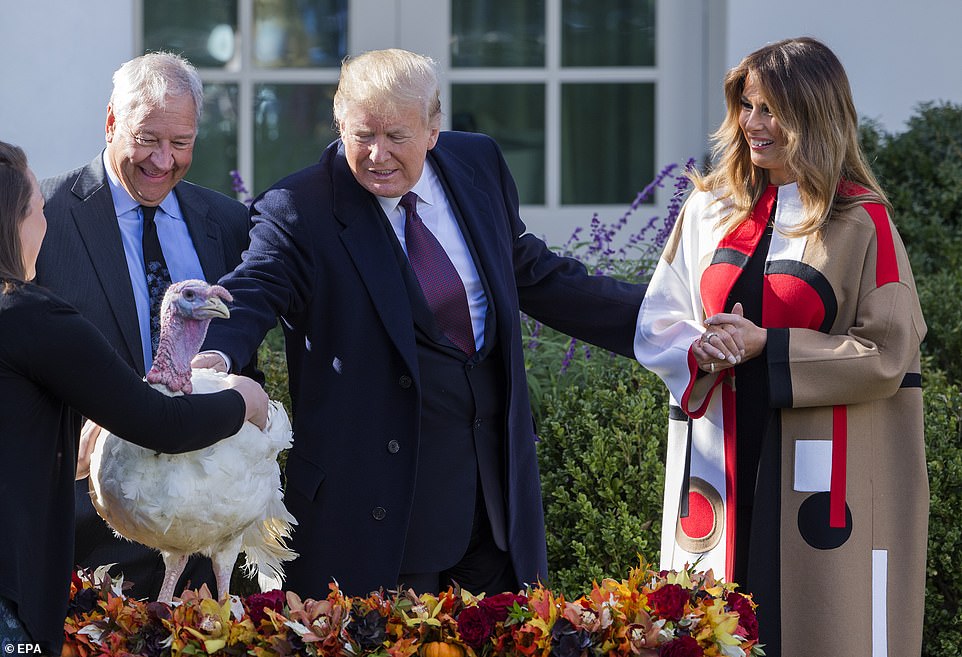 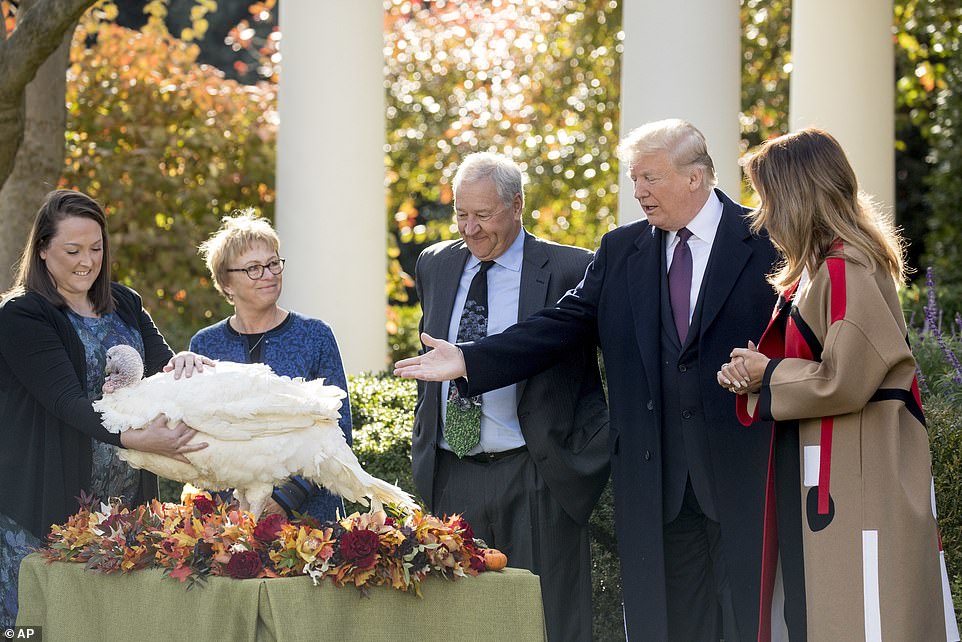 Trump was accompanied by first lady Melania Trump, right, pardons ‘Peas’ at  a ceremony in the Rose Garden

POTUS was observing the time honoured presidential tradition to spare a plump turkey from the Thanksgiving dinner table, which began in earnest with George HW Bush in 1989.

Trump was accompanied in the Rose Garden by his wife Melania, who was sporting a patterned Christian Dior coat.

The president announced that Peas, weighing 39lb, had won a public vote on the White House website to be guest of honor, while 41lb Carrots would be the alternative turkey.

Trump added: ‘And I will tell you we’ve come to a conclusion: Carrots, I’m sorry to tell you the result did not change. It’s too bad for Carrots’.

Peas and Carrots, both raised on a farm near Huron, South Dakota, now get to live the rest of their lives at a Virginia farm.

‘However even though Peas and Carrots have received a presidential pardon, I have warned them that House Democrats are likely to issue them both subpoenas’. 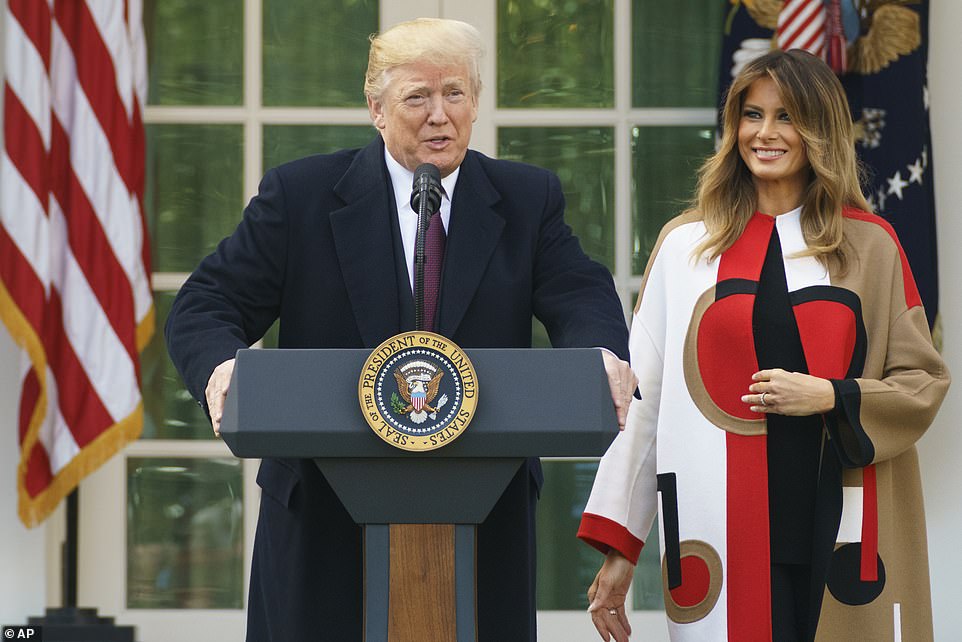 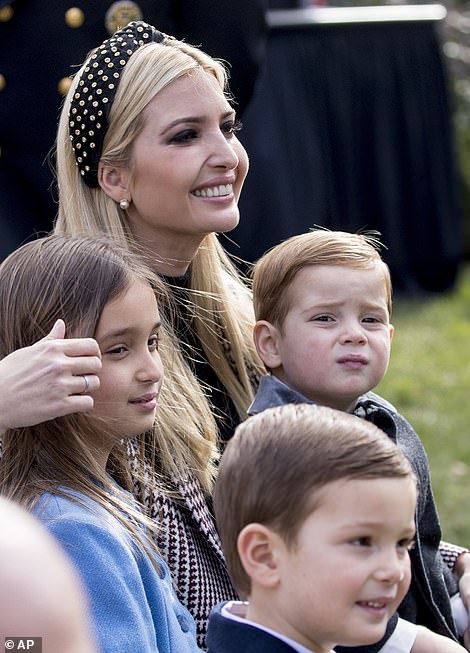 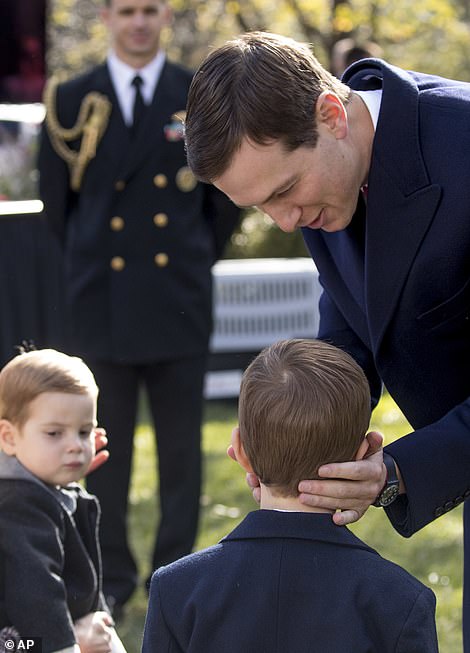 White House adviser Ivanka and husband Jared attended the reception with their three children arrived with her three children, Arabella, 7, Joseph, 5, and Theodore, 2

Trump continued with the quips for a couple of minutes and then approached the winning turkey and raised his hand as if giving the bird a blessing.

‘Peas, I hereby grant you a full pardon!’,  he pronounced before ruffling its feathers.

The commander in chief also took a swipe at the the ninth circuit court of appeals, which has blocked several actions by the Trump administration, including his decision to end the Daca program.

‘Unfortunately, I can’t guarantee that your pardons won’t be enjoined by the ninth circuit. Always happens. They’re guaranteed’. 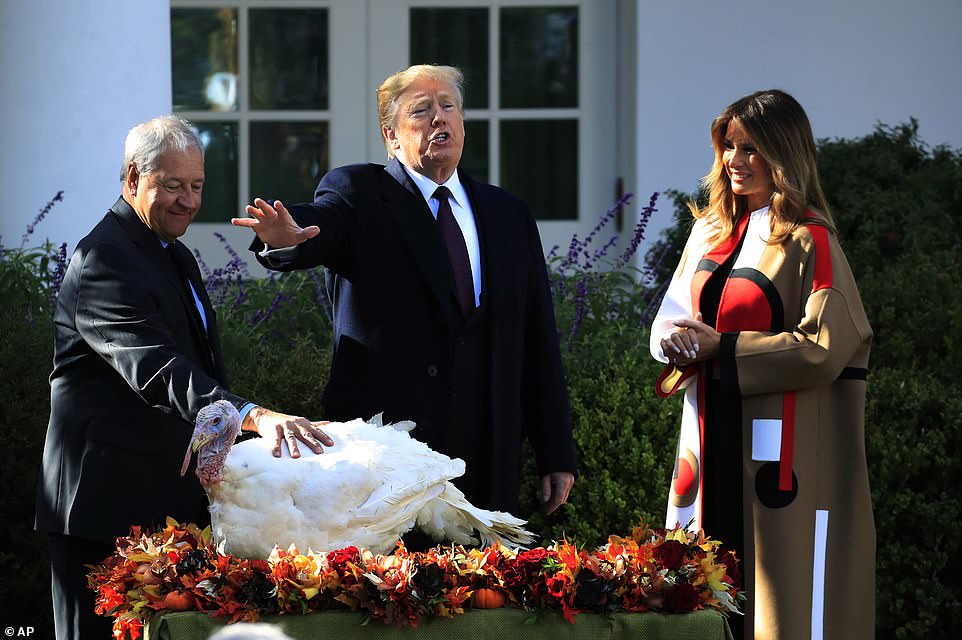 The president announced that Peas, weighing 39lb, had won a public vote on the White House website to be guest of honour 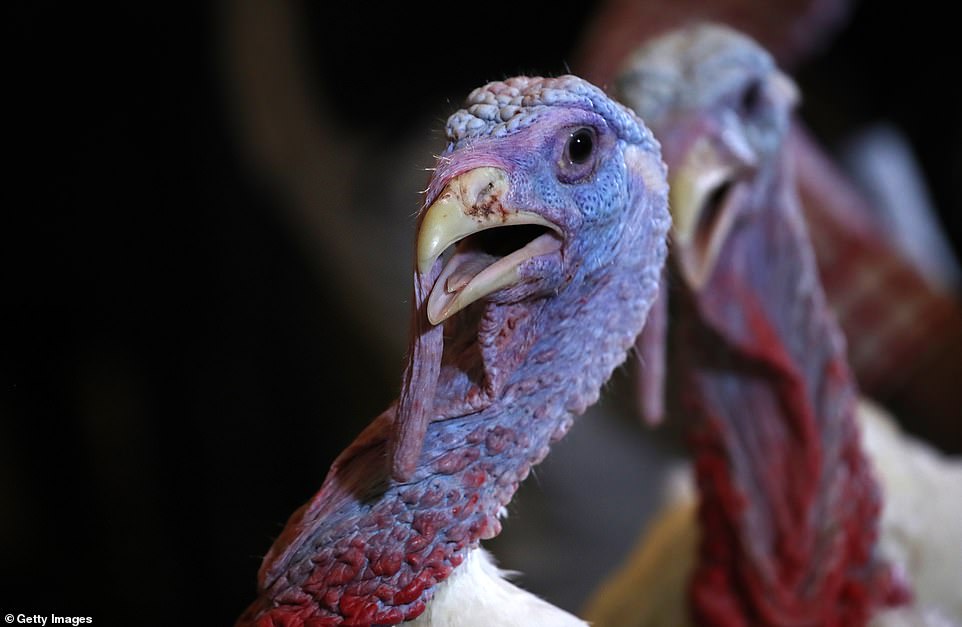 Peas and Carrots, the National Thanksgiving Turkey and its alternate, are shown to members of the media during a press conference held by the National Turkey Federation 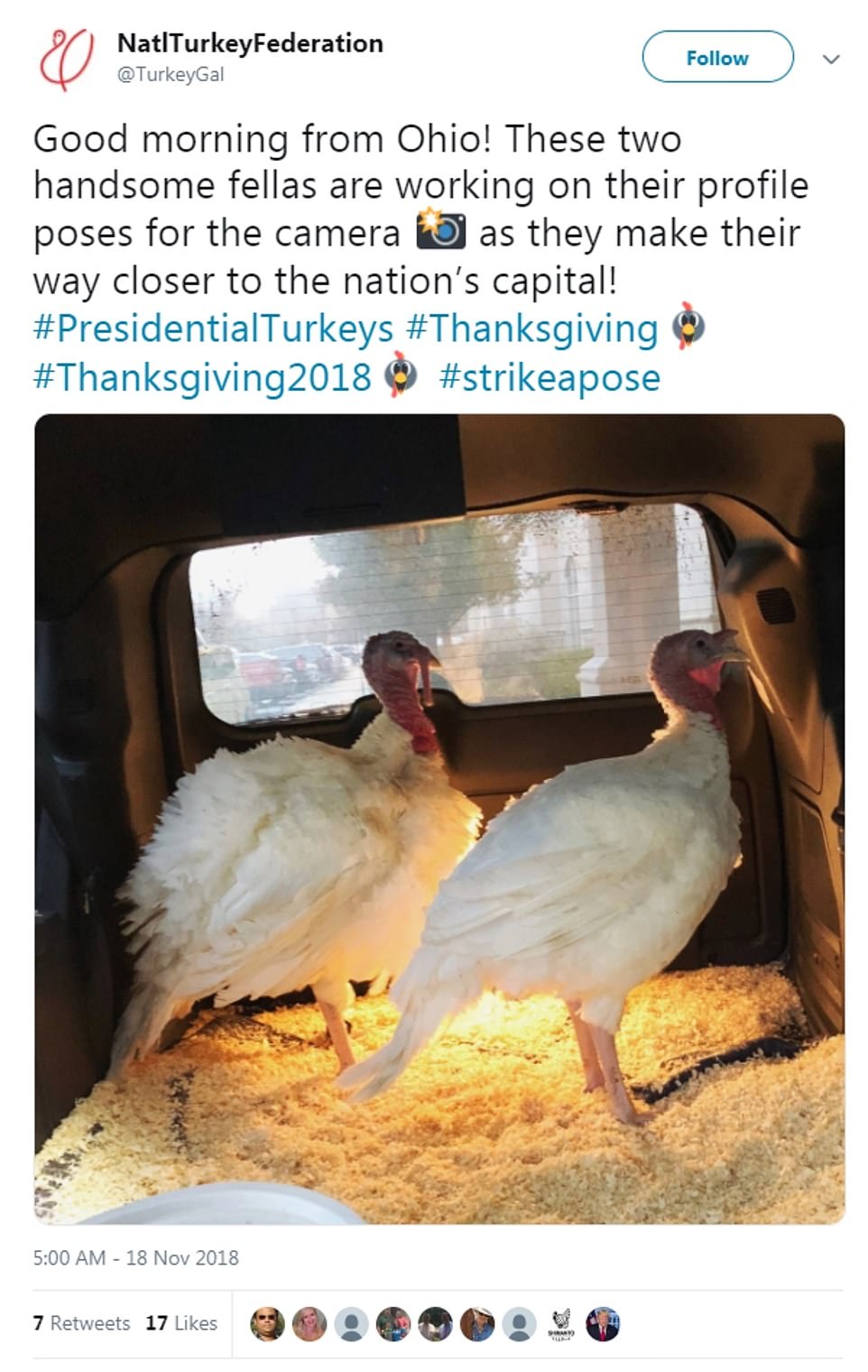 Trump’s daughter Ivanka sat on the front row with her son on her knee along with her husband Jared and the rest of their children.

She managed to appear in good spirits even though it had just emerged those same House Democrats intend to investigate whether she broke federal law by using a personal email account for government business.

Sources told the newspaper that Ivanka expressed a lack of knowledge of all the rules when she was asked about her emails.

Ivanka’s emails drew particular attention because her father repeatedly slammed Hillary Clinton for her private email server as they competed against one another in the 2016 presidential election.

The National Turkey Federation documented their trip from the Dakotas all the way to Washington via the warm backseat of a wood shaving-filled Suburban.

Peas and Carrots took the stage at a formal news conference Monday morning at the Willard and fun facts about each turkey were posted on the Turkey Federation’s account.

Peas, for instance, enjoys popcorn and the musical stylings of Brad Paisley. Carrots is more of an Elvis fan, preferring to snack on M&Ms.

As of Tuesday morning, the poll for a favorite turkey on the official White House account was tied 50-50 with just under 50,000 votes, certainly within the margin of error for a recount.