NSW Traffic and Highway Patrol Command have been patrolling the area in the CBD and Kensington areas between December 13 and January 13.

A total of 253 infringements were issued for not complying with traffic signals during the Pedestrian Compliance Operation.

Pedestrians who were caught illegally crossing the tram tracks were handed $76 fines by police during the operation.

Hundreds of jay-walking pedestrians have been subjected to hefty fines as police have cracked down on traffic compliance regulations around Sydney’s light rail. Pictured: someone being fined in a crackdown in November 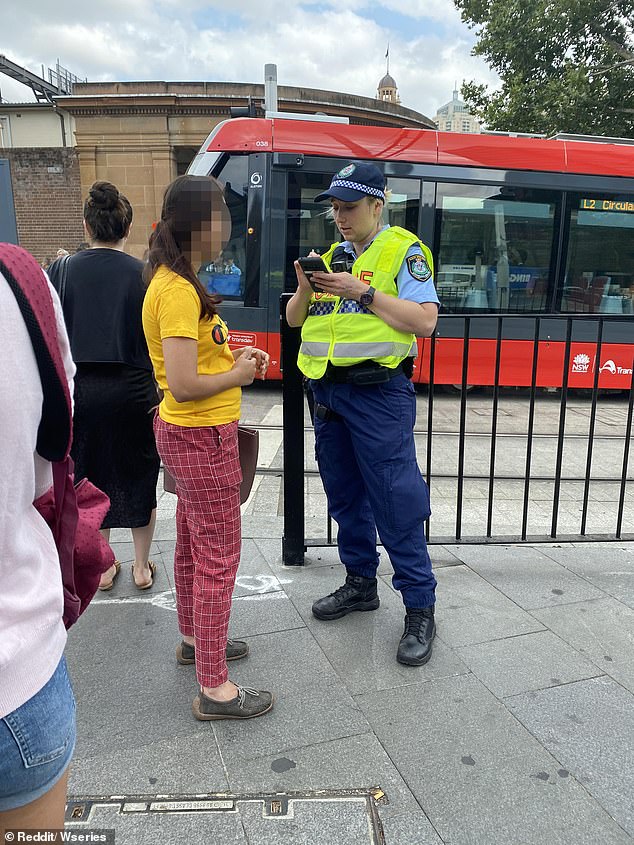 Police said pedestrians were able to cross the street at a tram line, as long as they’re more than 20 metres away from a set of lights.

They are also required to look up and stay vigilant as they cross.

So far this year, three pedestrians have been killed on NSW roads.

On Monday, police officers were seen outside Sydney’s Central station, targeting people who were not adhering to light signals.

A photo of a woman being issued a fine at the light rail crossing quickly went viral after it was posted to Reddit on Monday.

The image sparked a furious debate between Sydneysiders, with some questioning the severity of the crackdown and others defending the actions of police.

‘If you aren’t aware enough to see the police standing in uniform at each side of the crossing, you aren’t paying enough attention to your environment and probably shouldn’t be crossing the road against the lights,’ one person wrote. 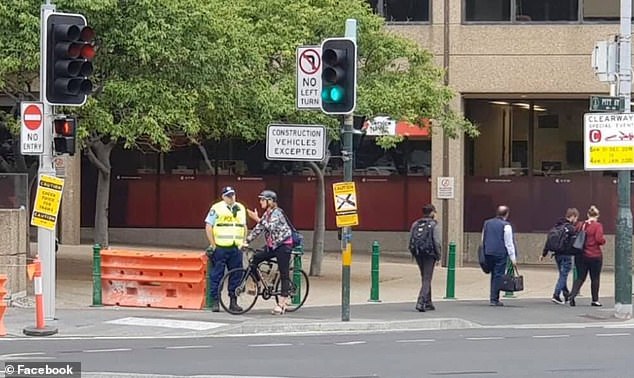 ‘The lack of situational awareness displayed by some these days is breathtaking,’ another wrote.

Meanwhile, others slammed police and claimed they were simply revenue raising.

‘But how about issuing warnings instead of fines? Surely that will get the point across just as well?’ one person wrote.

With the first leg of the Sydney light rail slated to open in December, drivers are reminded of a few road rules to follow to ensure their safety:

1) Do not drive along the tram tracks

2) Don’t queue across the intersections

‘The fines are completely unnecessary and people are right to be calling this out as a revenue raising exercise.’

But another user disagreed: ‘Not revenue raising when it’s trying to promote public safety.’

‘This is not revenue raising, people are going to get hit by these things and die,’ another person argued.

A NSW Police spokesperson said the periodic crackdowns are based on road trends monitored by police and are enforced ‘as often as required.’

‘The light rail is a new project so we’re trying to raise awareness and educate people to be safe,’ the spokesperson told Daily Mail Australia in November.

In October, officials announced new road rules affecting pedestrians, motorists and cyclists will be implemented in December to coincide with the new transport system.

Drivers were reminded to not queue across the rail lines that pass through intersections and to follow the appropriate signage. 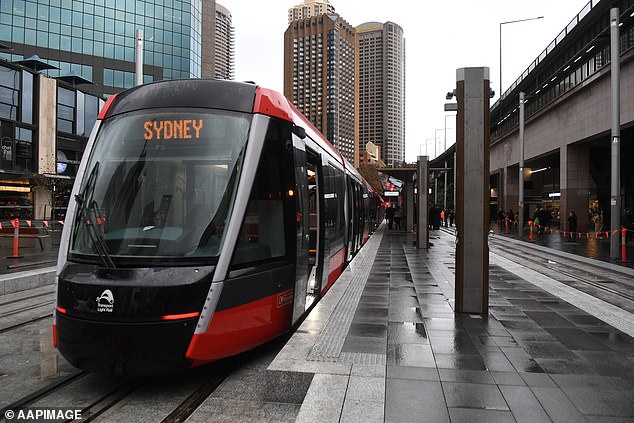 Pedestrians have been issued an on-the-spot fine of $76, with police hoping it will reduce the risk of injury

They should also never travel along the tracks in the middle of the road and to stick to the designated lanes on the outside of the tram line.

Cyclists have been warned to keep an eye out for new ‘no entry’ signs at frequently travelled routes.

New restrictions have been put in place at Hay Street, and ignoring the warnings could cost cyclists $114 in fines.

Cyclists are also forbidden from entering tramways and those caught doing so will face a $268 fine.

Motorists can also incur fines for not following new rules.

They will be fined $268 and single demerit point for entering and driving across a tramway.

But the rules – as well as the government’s decision to reintroduce a tram at all – have been criticised by commuters who say ‘its just a matter of time until someone is killed’.