Peers who claim £1.3m in expenses but never utter a word

More than 100 peers claimed a total of almost £1.3million in expenses last year – despite never uttering a word in the House of Lords, a study reveals today.

It found that 115 peers – one in seven – did not speak in a single debate during the latest parliamentary session.

However they claimed an average of more than £11,000 each in expenses.

Peers are entitled to claim a tax-free £300 daily allowance just for turning up to the chamber and are not obliged to speak in debates, attend committees or ask written questions.

Those who live outside London are also entitled to claim travel expenses for journeys to Westminster.

Analysis of the Lords’ voting, speaking and expenses records by the Electoral Reform Society (ERS) showed that 115 peers did not take part in a debate during the 2016/17 parliamentary session, but claimed an average of £11,091 each over the course of the year. This equates to around £1.27million.

The report also found that more than £4million was claimed by the 277 peers – 36 per cent – who spoke five times or fewer in the past year.

Last night, campaigners warned that ‘couch-potato peers’ were enjoying an ‘expenses free-for-all’, with claims rising by 11 per cent in the past two years to £22.4million.

ERS chief executive Darren Hughes said: ‘There appears to be a growing something-for-nothing culture in our Upper House, with tidy sums being claimed by those who barely contribute. There are a worrying number of couch-potato peers and lobby-fodder Lords.

‘It’s completely unacceptable that peers can claim thousands without even speaking or voting in the House, and it highlights the reality that there is no accountability for peers.’

Former Labour minister David Hanson MP, who has been campaigning for the removal of hereditary peers, said: ‘Whether people speak or not, the Lords as it stands is no longer fit for purpose. This highlights the fact that many people are lobby fodder.’ 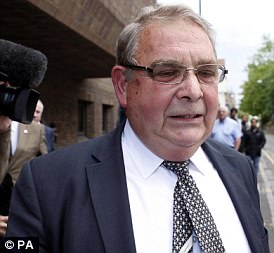 Former Tory peer Lord Hanningfield (pictured) was jailed in 2011 for falsely claiming £13,379 in expenses and was later expelled from the party.

After returning to the Lords following his jail term, in 2013 the former Essex County Council leader was caught ‘clocking in’ to the House of Lords for as little as 21 minutes to claim his £300 daily attendance fee.

Reporters found that on 11 out of 19 days – for which he claimed £5,700 – he spent fewer than 40 minutes in Parliament. At the time, he claimed ‘at least half’ of peers were abusing the system, going on to say: ‘They all do it.’

An investigation by the Sunday Times earlier this year found he claimed £3,300 for 11 days attendance in 2015-16 when he contributed to no votes and only one debate – on education in prisons. There was no suggestion he has broken any rules with the claims.

The Lib Dem Lords leader Dick Newby said it was ‘clear the House of Lords is in need of radical reform’. However, the Lords argued that many peers contribute in ways other than speaking in the chamber.

A spokesman said: ‘Speaking in the chamber is only one of the ways members hold the Government to account.

‘This research ignores contributions including amending legislation, asking the Government written questions and serving on select com-mittees, as well as parliamentary work away from the chamber.’

The spokesman added that the Lords had tabled 5,608 amendments to legislation, asked Government 7,395 written questions and published 170 committee reports in 2016/17.

Earlier this year it emerged that a Lords probe into peers who claim thousands but do not do any work was dropped amid fears of a public backlash.

Baroness D’Souza spent months investigating peers who claim the daily allowance without making any contribution in the Upper House, but scrapped the research to avoid ‘naming and shaming’ offenders.

On Saturday, the Mail revealed that a fifth of peers faced being kicked out of the Lords under a dramatic plan that would force them to retire at 80.

A committee looking at cutting the size of the upper chamber is expected to recommend compulsory retirement for older members next month.