The Democrats-in-black protest is seemingly enough for House Minority Leader Nancy Pelosi, who instructed her members not to walk out of the State of the Union or make a commotion during President Trump’s speech.

‘Let the attention be on his slobbering self,’ Pelosi said, according to Politico’s sources. ‘If you walk out, don’t come in.’

The top House Democrat gathered her troops – dozens of female lawmakers, and some male ones too – for a photo-op showing their black outfits for tonight on Tuesday afternoon.

‘Let the attention be on his slobbering self,’ Nancy Pelosi reportedly told her colleagues, urging them not to cause a commotion in the chamber during President Trump’s first State of the Union 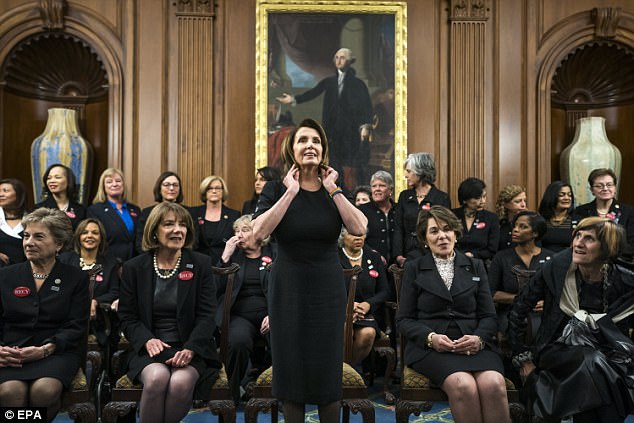 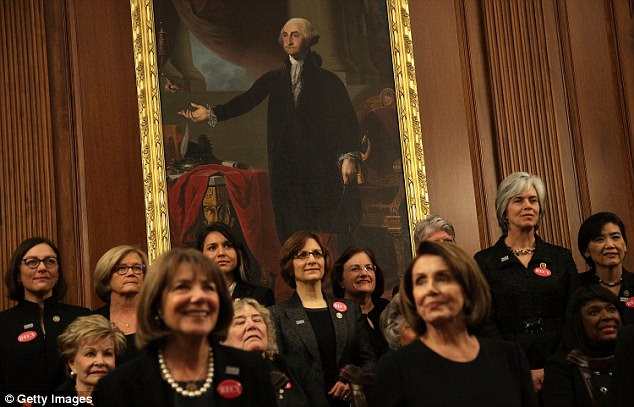 House Minority Leader Nancy Pelosi (right) reportedly thought the wardrobe revolt sent enough of a message to President Trump, urging her Democratic colleagues not to walk out of tonight’s speech 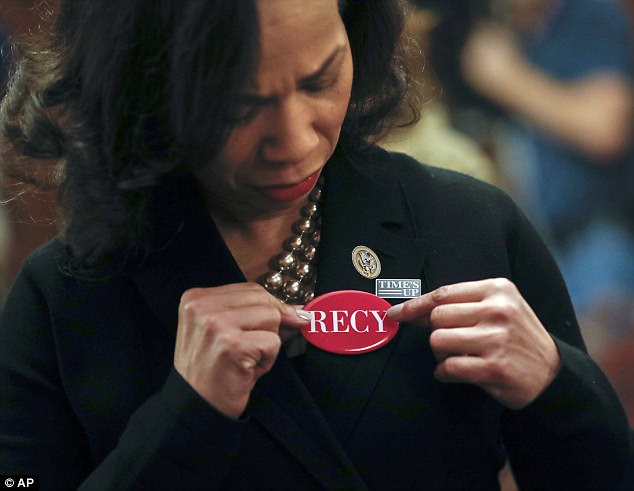 Rep. Lisa Blunt, a Democrat from Delaware, straightens her ‘RECY’ pin in advance of Tuesday night’s State of the Union. The pins pay homage to the late Recy Taylor, a rape victim turned activist that talk show queen Oprah Winfrey paid homage to in her Golden Globes speech 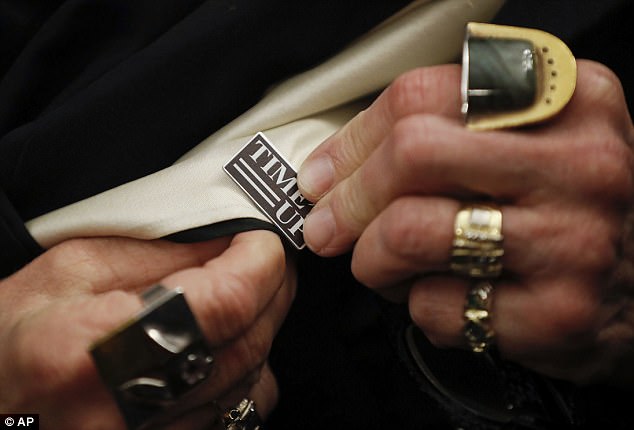 Rep. Rosa DeLauro, a Democrat from Connecticut, adjusts her ‘Time Up’ pin as she joins other House members for a photo-op showing many women lawmakers, and some men too, dressed in black for Tuesday night’s State of the Union speech

Democratic lawmakers, and some men too, show off their ensembles for tonight’s State of the Union speech as they show their support for the ‘Me Too’ movement. President Trump was previously accused of sexual assault 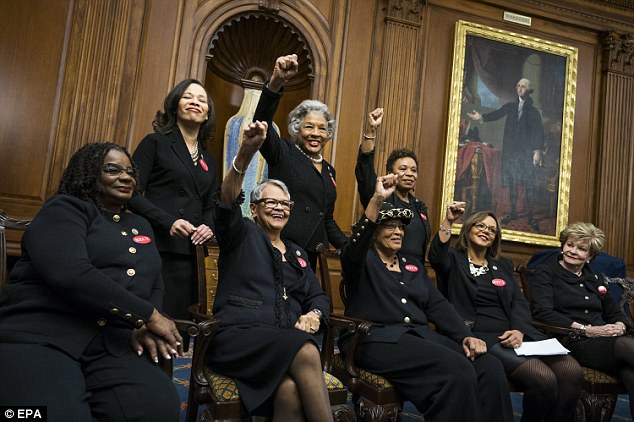 Democratic lawmakers, dressed in all black to show support for the ‘Me Too’ and ‘Time’s Up’ movements throw up a fist bump during a photo-op Tuesday before President Trump’s State of the Union address 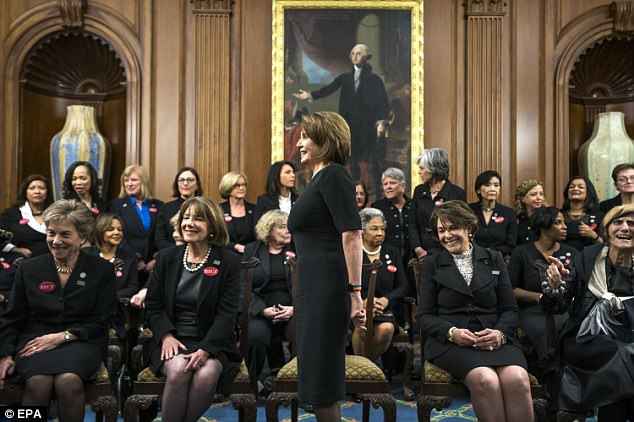 House Minority Leader Nancy Pelosi stands up among her peers as Democratic women show off their black attire, which they’ll be wearing at tonight’s State of the Union address 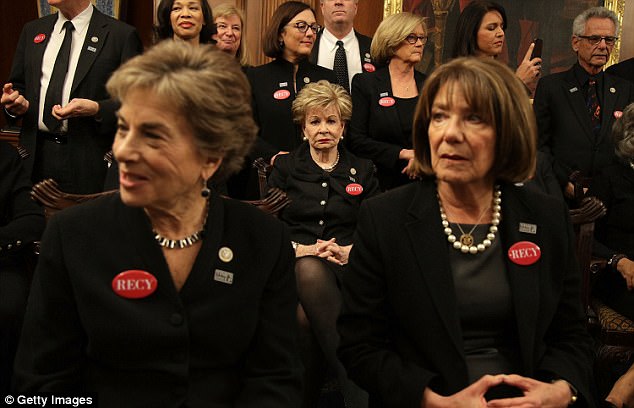 Rep. Jan Schakowsky (left), an Illinois Democrat who is among the lawmakers boycotting tonight’s speech, sat for the photo with the other women in black. She was seated beside Rep. Susan Davis (right), a Democrat from California

The lawmakers were taking a page from the women of Hollywood, who sported black gowns to the Golden Globes to pay homage to the ‘Me Too’ and ‘Time’s Up’ movements.

The Democrats followed the lead of Oprah Winfrey too, who had brought up the rape and subsequent activism of the late Recy Taylor.

For the State of the Union, the lawmakers sported pink ‘RECY’ pins too.

Besides the buttons and the black garb, Pelosi was looking to avoid the Democrats’ own ‘you lie!’ moment, what Republican Rep. Joe Wilson shouted at President Obama during a 2009 health care speech, shocking and appalling many of his colleagues.

Pelosi, according to Politico, warned her colleagues that the bar would be set low for Trump’s speech – as his Congressional address last year, which he read from a teleprompter, was met with accolades by pundits for the president acting presidential.

That side of Trump is not often seen in his tweets.

‘If his nose isn’t running and he isn’t burping, he did a great speech,’ Pelosi said during the closed-door House Democratic Caucus meeting Tuesday morning.

She didn’t want any distractions, telling those tempted to make a fuss mid-speech to stay at home. 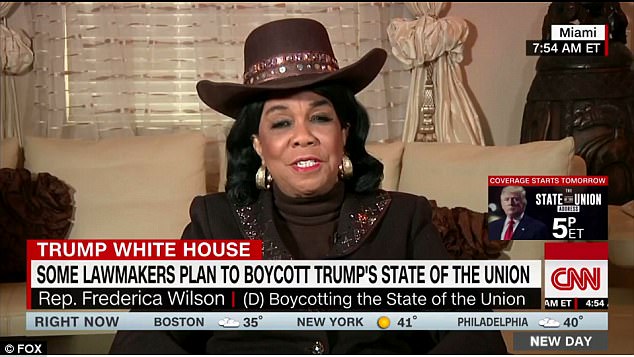 Rep. Frederica Wilson, a Democrat from Florida, started off State of the Union week by explaining on CNN why she wouldn’t be going. Wilson is not alone

A handful of Democratic members have opted to do just that, with Rep. Frederica Wilson kicking off State of the Union eve yesterday by explaining why she wouldn’t attend.

‘I’m not going because to do would be to honor the president, and I don’t think he deserves to be honored at this time,’ the Florida Democrat said on CNN. ‘After being so hateful toward black people and then black countries, Haiti and the whole continent of Africa, it hurts, it hurts, and he has brought the White House to the lowest, and I don’t think he needs to be honored with my presence,’ she went on.

Wilson is not alone in making tomorrow night’s State of the Union speech, Trump’s first, into a political point.

Earlier this months, on the heels of reports that said Trump referred to Haiti, El Salvador and the whole of Africa as ‘s***hole’ countries, during a closed-door immigration meeting, Rep. John Lewis, a civil rights pioneer, announced that he would not go.

‘In good conscience, I can not and will not sit there and listen at him as he gives the State of the Union Address,’ Lewis said then.

That’s when Wilson originally announced she would sit out, as did Democratic Reps. Maxine Waters, of California, and Pramila Jayapal, of Washington state.

On Friday, they were joined by Rep. Jan Schakowsky, an Illinois Democrat, who said in a statement she was boycotting the address ‘because I refuse to normalize President Donald Trump and his loathsome language and actions.’

‘With every day that passes, a new tweet, breaking news story, or leaked quote sheds new light on President Trump’s twisted and prejudiced mind,’ she added.

The congresswoman took particular offense to his ‘s***hole countries’ comment, his reaction to the racial violence in Charlottesville, Virginia last summer, in which he said there were good people on ‘both sides’ of a clash between neo-Nazis, KKK members and white supremacists and counter-protesters, and for the roll-out of his ‘Muslim ban’ last year, which Schakowsky pointed out happened on Holocaust Remembrance Day.

On Sunday, Rep. Gregory Meeks, a Democrat from New York, told MSNBC he would not be there. ‘

‘I cannot give this man, who does not respect me, the respect to be in that audience,’ Meeks said. ‘I will not be there.’

Meeks was joined by two other black House members, both from Illinois, on Monday as Reps Danny Davis and Bobby Rush, announced they would not attend.

Rush called Trump’s first year in office ‘the most chaotic, divisive, and incompetent’ and said he would not ‘watch as Trump pretends that he’s off to a successful start.’

‘He’s not,’ Rush said in a statement put out by his office.

Late Monday, Rep. Juan Vargas, a Democrat from California, indicated that he would not attend.

While a majority of Democratic members boycotting were minorities, the first lawmaker to announce he would be playing hooky was a white guy, Rep. Earl Blumenauer from Oregon.

Blumenauer later said he would be sending in his stead, a ‘dreamer’ to the speech, as Congress continues to debate what happens next with DACA, the Deferred Action for Childhood Arrivals program, an Obama-era order that allowed undocumented immigrants brought to the U.S. as children to gain legal status.

Trump has since announced he was scrapping the program and tossed the problem to Congress.

Other Democrats, too, are using their guests as mini-protests.

Rep. Joe Kennedy, the Massachusetts Democrat whose great-uncle was the late President John F. Kennedy, is bringing a transgender soldier – Staff Sgt. Patricia King – to the State of the Union, to protest the president’s proposed transgender troops ban.

The congressman’s guest was first reported in the Boston Globe.

Kennedy will also be giving the Democrats’ official rebuttal after Trump leaves the dais.