Nancy Pelosi railed against President Donald Trump’s announcement that he is looking to make his Republican National Convention acceptance speech from the White House later this month.

‘You don’t have political events at the White House,’ Pelosi said in an interview with MSNBC Wednesday. ‘You can’t do it.’

‘Yeah, it’s very wrong,’ the House Speaker told MSNBC host Andrea Mitchell. ‘For the president of the United States to degrade once again the White House as he has done over and over again by saying he’s going to completely politicize it, is something that should be rejected right out of hand.’

‘Again, it’s notion-mongering, not serious thinking,’ she said, suggesting the move is another attempt to distract from the coronavirus pandemic.

‘It won’t happen, let’s put it that way,’ she argued. ‘Whether it’s legally wrong or ethically out of the question, it shouldn’t have even been something that was expressed.’

Some members of Trump’s own party have also pushed back against the new plans.

‘Is that even legal?’ he asked when reporters brought up the president’s suggestion to the South Carolina senator.

‘I assume that’s not something that you can do,’ he continued. ‘I assume there’s some Hatch Act issues, or something.’

Senator Ron Johnson, a Republican from Wisconsin, suggested that other plans should be made.

‘Probably not allowed,’ he told reporters at the Capitol. ‘Probably shouldn’t do it.’

Donald Trump said Wednesday that he will likely give his Republican nomination speech from the White House after he was forced to shake up convention plans several times due to coronavirus restrictions. ‘You don’t have political events at the White House,’ Pelosi said in an interview with MSNBC Wednesday, adding that it’s ‘wrong’ and, You can’t do it’

‘We’re going to do virtual and we’re going to do some live speeches from different locations,’ Trump detailed to Fox & Friends during a Wednesday morning call-in interview. ‘And I’m going to do mine on Thursday night, and that will be live.’

‘I’ll probably do mine live from the White House,’ Trump said of the speech, confirming reports that he is considering moving the main event of the convention to Washington, D.C.

Trump said while he is open to giving his speech from a different location if any problems arise with the new plans, he feels the White House is the ‘easiest, least expensive’ and ‘very beautiful’ location.

His campaign also said they are looking at options to reimburse the government for any costs incurred as part of the events at the White House.

Several Democrats have raised concerns over violations of the Hatch Act, which prohibits executive branch employees from engaging in specific forms of political activity.

Democrats, and some Republicans, have suggested that could include using the White House as a venue for political or campaign-related functions.

While the House Speaker condemned the president from his decision, she commended Joe Biden for deciding to skip out on traveling to Milwaukee, Wisconsin for the Democrat Convention and giving his speech from his home state of Delaware.

‘It’s going to be a great convention. People will see it virtually and we’re very proud of him,’ the California Democrats said of the presumed Democratic nominee.

Biden announced Wednesday, as well, that he won’t be traveling for his convention speech.

When Senator Mike Rounds was asked about the president’s announcement, he said, ‘Well, he lives there. What are his options?’ 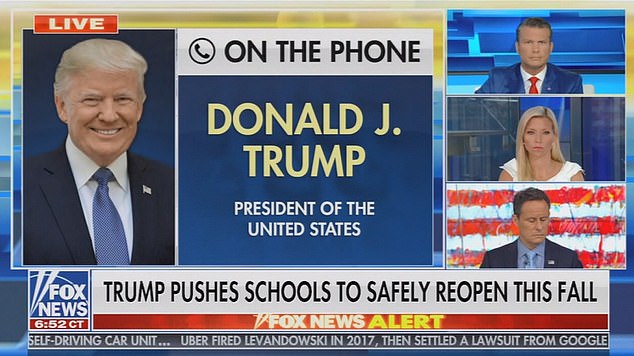 Donald Trump told Fox & Friends Wednesday morning that he will likely give his Republican Convention acceptance speech ‘live from the White House’ because it is the ‘easiest, least expensive’ and a ‘very beautiful’ option 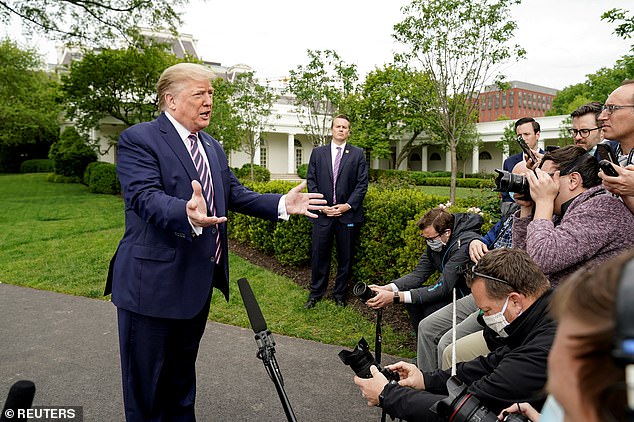 Trump also revealed that first lady Melania Trump, ‘warrior congressmen,’ like his Capitol Hill allies Jim Jordan and Matt Gaetz, among others will also be making speeches as part of the Republican National Convention nominating events.

The first night of the four-day convention will still take place on August 24 in Charlotte, North Carolina – the original site of the quadrennial event.

That Monday will be the nomination voting night, which will be live streamed.

Reports indicated over the weekend that the media would be barred from attending the convention in Charlotte in-person – but Trump said those reports were not true.

‘We’re going to let the press go in to watch it,’ Trump told the Fox & Friends panel. ‘But you know, socially distanced.’

The convention initially was scheduled to take place in Charlotte but the president pushed the committee to change the events to Jacksonville, Florida after North Carolina Governor Roy Cooper restricted attendance numbers due to concerns over coronavirus.

Florida, at the time of the change had much looser lockdown orders, which would have allowed for the president to have his desired crowd for his nomination acceptance speech.

Due to a surge in cases in the Sunshine State, however, lockdown orders were reinstated and the president gave up on moving his speech – and other major convention events – to Florida.

Since then, the official plans have been up in the air with no final decision being announced.

Several hundred Republican delegates will gather in Charlotte on August 24 to nominate Trump as the Republican presidential candidate.

There will then be three more days of speeches and programming from sites that are still undetermined, ending with Trump’s speech August 27 – likely at the White House.