House Minority Leader Nancy Pelosi was spotted at a luxury hotel in Hawaii just before the partial government shutdown entered its seventh day Friday, with little sign of progress to end it.

The likely speaker didn’t appear to miss out on any negotiations, as talks between the White House and Democratic congressional leaders appear to have ceased, even as hundreds of thousands of federal employees remain on furlough.

Pelosi’s office says the White House hasn’t contacted them since December 11, when Trump said at a tense meeting he would claim the ‘mantle’ of a shutdown.

The White House came out with a double-barreled attack on Pelosi Friday – not for being out of town, but for being unwilling to compromise and even claiming she was more interested in her own fortunes than protecting ‘American lives.’

The attacks came as Incoming White House chief of staff Mick Mulvaney stressed that President Donald Trump had called off his planned 16-day vacation at Mar-a-Lago and was working on the shutdown on a ‘minute-by-minute basis.’

Mulvaney claimed there was a split among Democratic congressional leaders that is preventing a resolution to the shutdown.

And White House press secretary Sarah Sanders blasted Pelosi as ‘more willing to protect that than she is to protect our borders and protect American lives.’

It wasn’t the same story for many senior aides, whose West Wing offices were dark on Friday early afternoon. Some other White House aides are themselves on furlough. 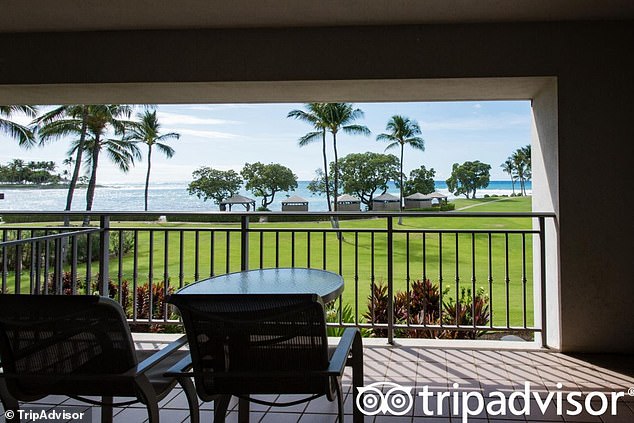 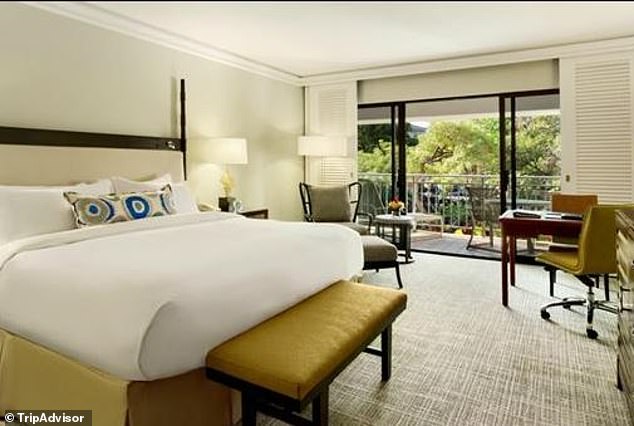 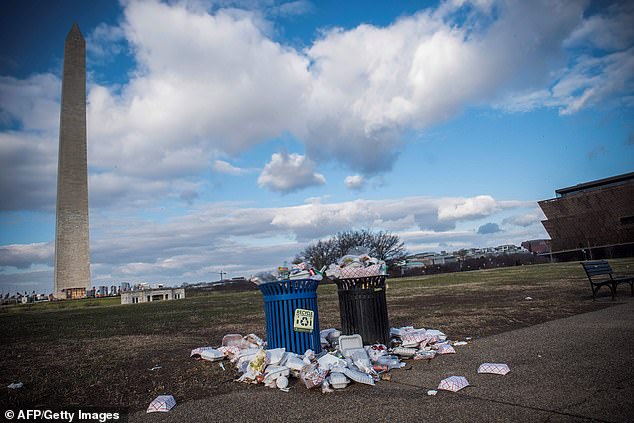 Litter spills out of a public dustbin next to the Washington Monument on the National Mall in Washington DC on December 24, 2018 amid the government shutdown

As the White House turned up the heat on Pelosi, it was revealed that the Democratic lawmaker was vacationing at the tony Fairmont Orchid on Hawaii’s big island where standard rooms go for $899 per night.

The pool has a dazzling oceanfront pool and even a ‘Spa Without Walls.’ She was spotted there on Thursday, the Washington Free Beacon reported.

Mulvaney, who Trump named his ‘acting’ chief of staff with the immediate departure of chief of staff John Kelly, claimed  Friday that Pelosi was holding back on a potential deal because of her upcoming election to become speaker – although all signs in recent weeks are that she has locked down the post. 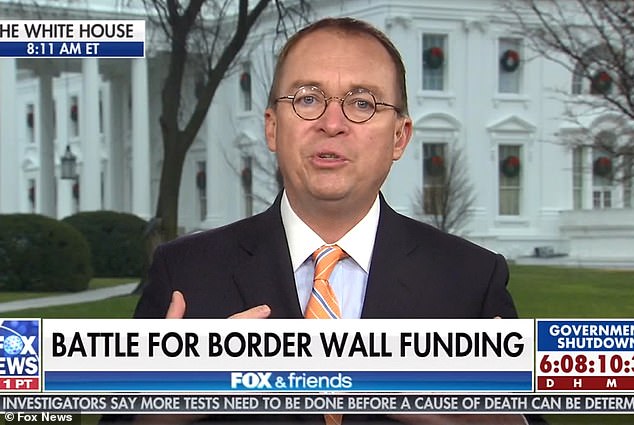 ‘The President’s been here, by the way, all weekend, all Christmas,’ Incoming White House chief of staff Mulvaney told Fox News 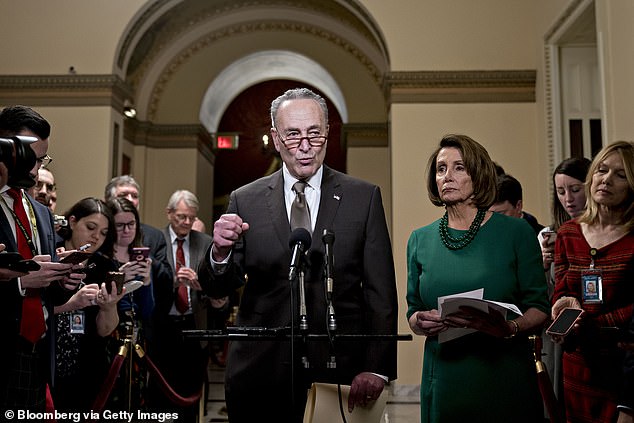 Her counterpart, Schumer is in New York spending time with family, including his new grandson, ‘on the phone with staff, members and Leader Pelosi constantly.’ (His daughter Jessica gave birth to a boy last month).

In what looked like an attempted divide-and-conquer via TV interview strategy, Mulvaney floated the theory of a split between the two leaders, who together clashed with Trump in a caustic televised Oval Office meeting days before the shutdown began.

White House press secretary Sarah Sanders also sought to turn up the heat on Pelosi, telling reporters at the White House Pelosi was ‘unwilling to actually do anything until she gets her speakership. She’s more willing to protect that than she is to protect our borders and protect American lives.’

He said of Senate minority leader Charles Schumer: ‘My gut was that he was really interested in doing a deal and coming to some sort of compromise, but the more we’re hearing this week is that it’s nancy Pelosi that is preventing that from happening,’ Mulvaney told Fox News in an interview from outside the White House Friday. 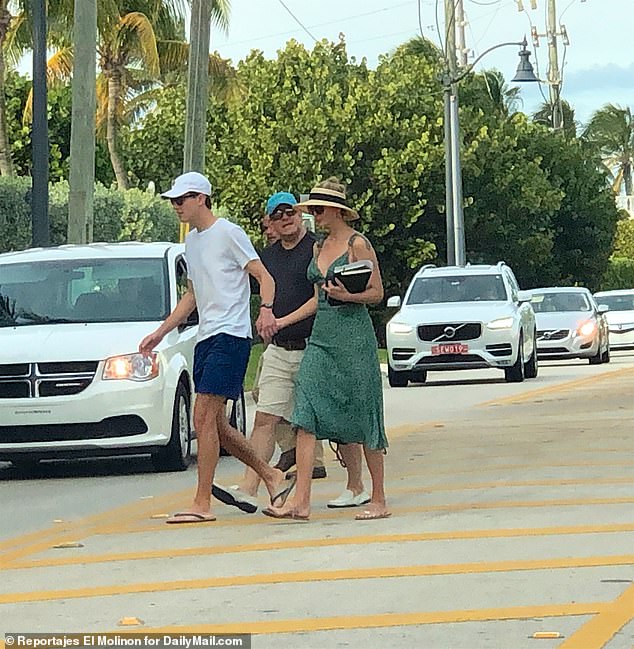 SUNNY GETAWAY: President Trump’s daughter and son-in-law, both of whom serve as unpaid advisers to the administration, were photographed by DailyMail.com Mar-a-Lago earlier in the week

He then argued that Pelosi was cornered into her position by her own need to prevail on the House floor Jan. 3 when she must stand for speaker.

‘She cannot be seen by her party as being weak on negotiating with Donald Trump,” Mulvaney said. ‘So we fully expected that until she’s elected speaker and has locked that vote up, we don’t expect to hear from the Democrats again.”

Asked about his claim, Pelosi’s office responded that the White House hasn’t reached out to Pelosi since Tuesday Dec. 11th, following the tense Oval Office meeting.

‘Democrats are united against the President’s immoral, ineffective and expensive wall – the wall that he specifically promised that Mexico would pay for,’ said spokesman Drew Hammill.

‘Republicans control the House, the Senate and the White House. House Democrats have repeatedly gone to the House floor – including yesterday – to try to force a vote on a clean bill to re-open government,’ he continued.

‘The last time there has been any outreach to Pelosi directly from the White House was Tuesday, December 11 when President Trump phoned her after the White House meeting that morning.’ 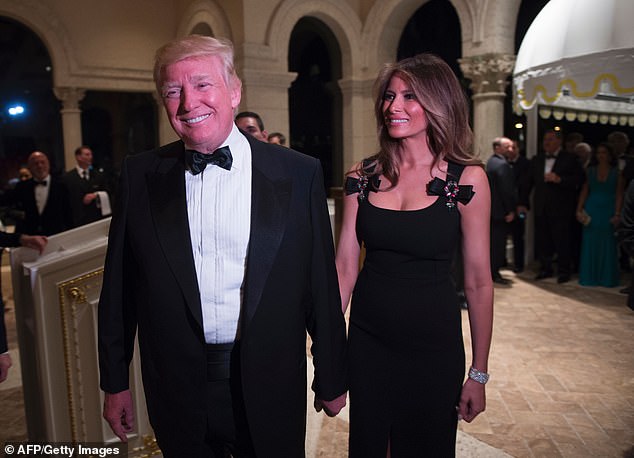 Mulvaney stressed that Trump has been working in Washington and missed his planned Christmas and New Year’s getaway at Mar-a-Lago. Trump typically spends his New Year’s holiday at the lavish estate he owns in Palm Beach 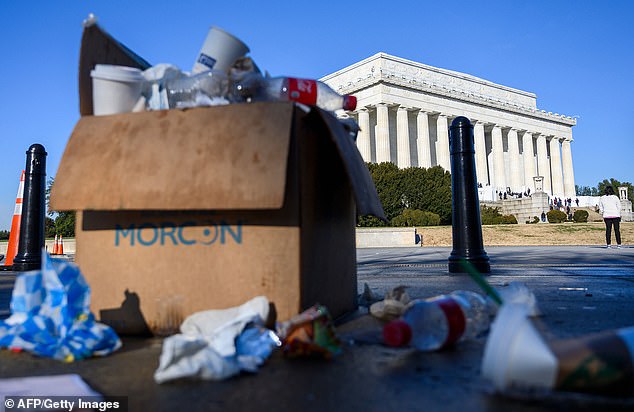 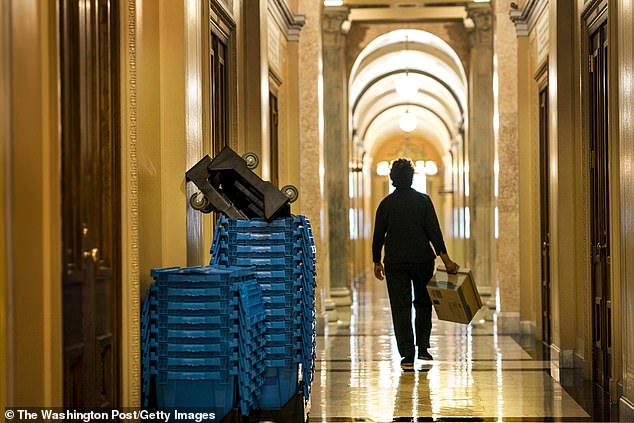 Mulvaney brought up that lawmakers have skipped town. On day 6 of the partial government shutdown boxes and furniture wait to be moved from Republican to Democratic offices in the US Capitol building on Capitol Hill in Washington DC on Thursday December 27, 2018

Pelosi mocked Trump’s evolving statements on what the wall would look like or be called in an interview this week in USA Today.

‘First of all, the fact … that he says, “We’re going to build a wall with cement, and Mexico’s going to pay for it,” while he’s already backed off of the cement – now he’s down to, I think, a beaded curtain or something, I’m not sure where he is,” Pelosi quipped.

Mulvaney also vouched for President Trump being hard at work, even as Congress essentially skipped town.

Mulvaney said Friday that Trump has been closely following the shutdown as well as the manhunt for an illegal immigrant suspected of killing a cop in California.

‘The president is very heavily engaged in this on an almost ‘minute-by-minute basis,’ Mulvaney said. He said he spoke to the president hourly.

‘They told us last night that they are not countering our last offer,’ Mulvaney said of congressional Democrats.

Mulvaney also praised ‘that steel slat fence that he sent the picture out,’ in reference to the border barrier Trump tweeted out with spiky points on top, saying experts consider it the ‘ideal border barrier.’

‘We are not giving up on that – it’s why the government is closed,’ Mulvaney said. But he said it ‘makes sense’ to sit down across the table with another party to negotiate.