Vice President Mike Pence talked tough on Venezuela on Friday and pledged freedom to its citizens as President Donald Trump imposed new restrictions on the country.

Pence posted a tweet repeating a pledge made during his four-nation tour of Latin America this month that the U.S. ‘will not stand by as Venezuela crumbles.’

‘The birthright of the Venezuelan people has always been and will always be libertad,’ he wrote, using the Spanish word for ‘freedom’.

He moved to restrict the Venezuelan government’s access to the U.S. financial system and squeeze the oil-based economy that sustains authoritarian President Nicolas Maduro, but stopped short of imposing a full oil embargo.

Amidst expectations of new economic sanctions, Pence visited Venezuelan exiles in Miami this week to express solidarity with their effort to protect the country’s democracy from President Nicolas Maduro’s increasingly authoritarian rule.

Pence tweeted that the administration ‘will not stand by as Venezuela crumbles. The birthright of the Venezuelan people has always been & will always be libertad [freedom]’ 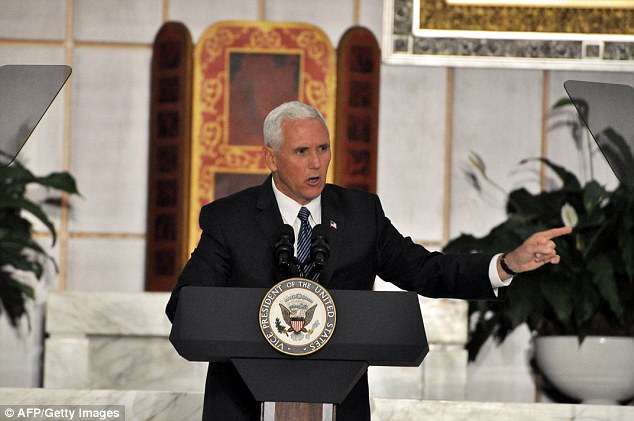 Maduro is struggling to combat widespread shortages and triple-digit inflation as oil production – the economy’s backbone- is at its lowest level in more than two decades.

Trump’s newly-signed executive order bans banks from engaging in new lending with the government or the state’s oil company, PDVSA. It also bars dealings in new bonds and stocks issued by the government and the state oil company.

‘These measures are carefully calibrated to deny the Maduro dictatorship a critical source of financing to maintain its illegitimate rule,’ a statement issued by the White House said.

The action followed Maduro’s decision to convene a special assembly to rewrite the constitution of the oil-rich nation and assume many government powers. 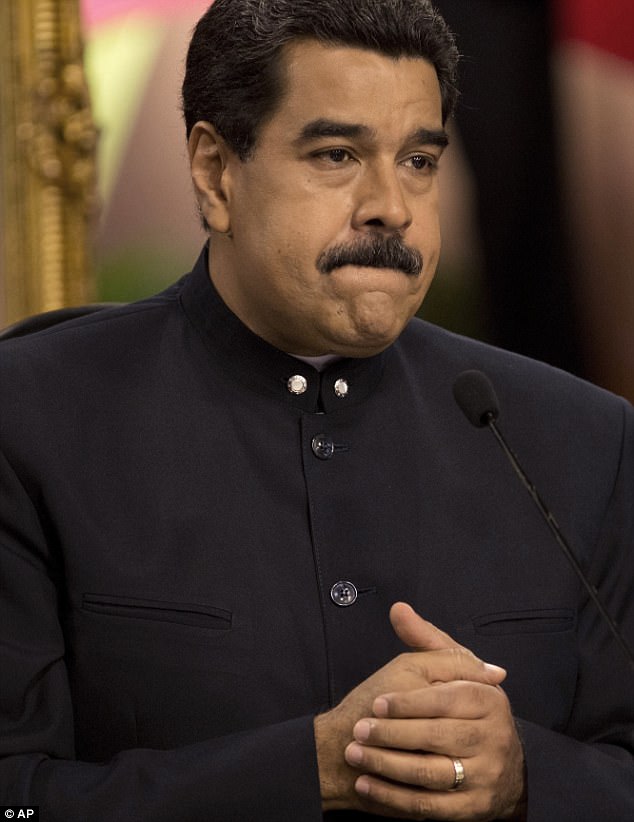 President Nicolas Maduro (pictured) is the authoritarian leader of Venezuela’s socialist party. He is struggling to combat widespread shortages and triple-digit inflation as oil production is at its lowest level in more than two decades 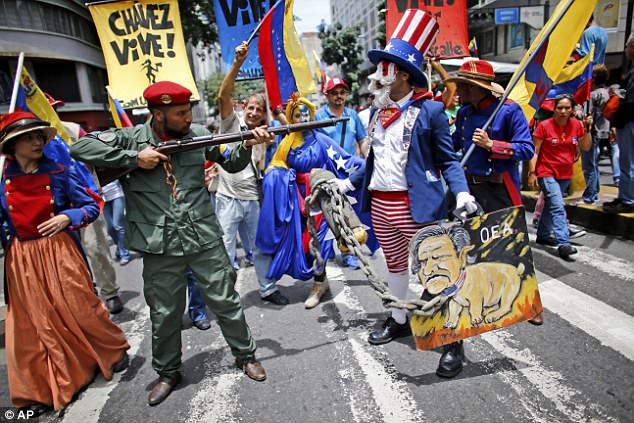 Maduro supporters performed a parody with a Venezuelan militia member confronting Uncle Sam during an anti-imperialist march to denounce President Trump’s talk of a ‘military option’ for resolving the country’s political crisis, in Caracas, Venezuela, on August 14

‘The president is making sure that the U.S. financial system will not be complicit in any future further placement of debt that would allow the Venezuelan government to finance this abhorrent behavior,’ a senior Trump administration official told Washington Post reporters.

Further economic sanctions could worsen a crisis that has already seen the oil-dependent economy shrink by around 35 percent since 2014 – more than the U.S. economy did during the Great Depression.

Any economic sanctions will also increase the risk Venezuela will default on its ballooning debt. 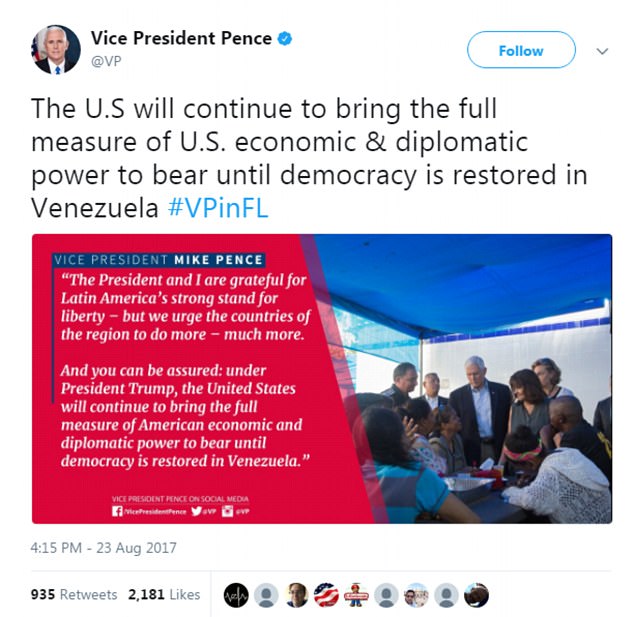 Pence tweeted that the Trump administration ‘will continue to bring the full measure of U.S. economic & diplomatic power to bear until democracy is restored in Venezuela’ 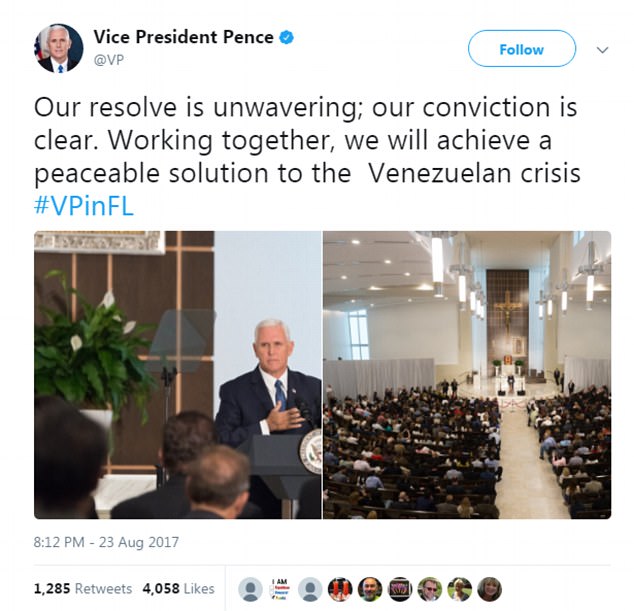 Maduro warned this week that the Trump administration was readying a ‘commercial, oil and financial blockade’ in the mold of the one that froze Cuba’s economy for decades.

He also said it would be meant to pave the way for a U.S. military intervention.

Maduro vowed to protect the population from the worst effects of any sanctions.

In another echo from his tour of Colombia, Argentina, Chile and Panama, Pence downplayed President Trump’s recent talk of a ‘military option’ for Venezuela in the Miami meeting. 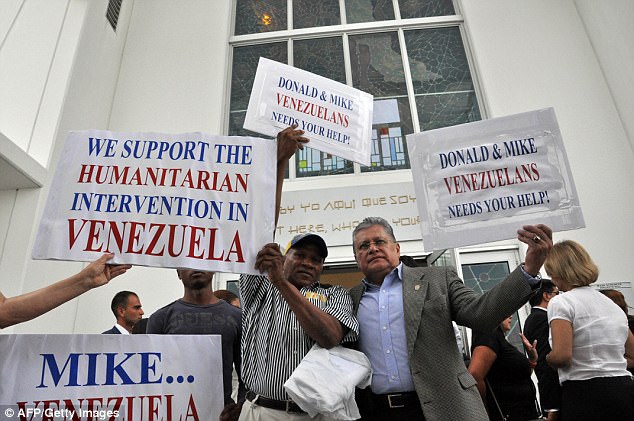 Venezuelan exiles and immigrants hold placards outside of Pence’s address in Doral, Florida, pleading with him and President Trump for ‘humanitarian intervention’

Last month the Trump administration promised to take strong economic actions if Maduro went ahead with plans to create a constitutional assembly of government loyalists.

The assembly was formed in early August with 545 delegates including Maduro’s wife and son.

Since it was seated, the assembly has voted to oust the nation’s outspoken chief prosecutor, take power from the opposition-controlled congress and create a ‘truth commission’ that may be used to target opponents.

Several prominent opposition mayors have also been removed or ordered arrested by the pro-government supreme court.

He said blanket sanctions that immediately cut off the government’s cash flow and hurt the population are likely to strengthen Maduro in the short-term.

‘It will bolster his discourse that Venezuela is the target of an economic war,’ Smilde said. 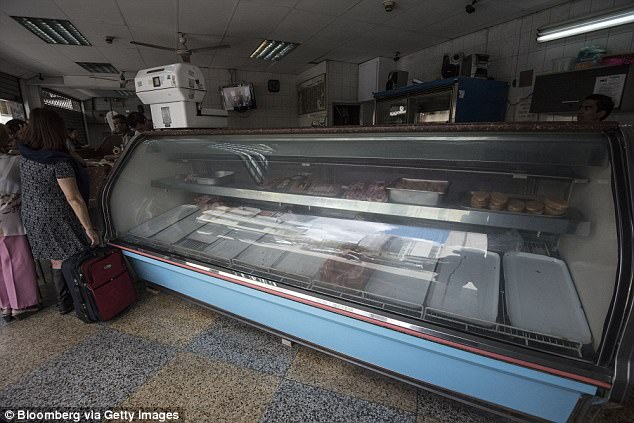 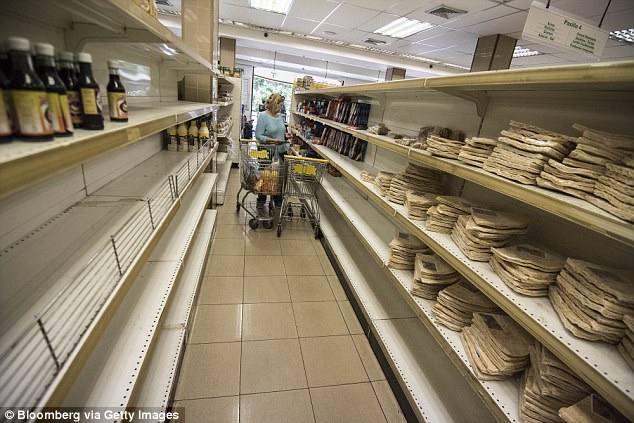 A customer shops for groceries at a supermarket in Caracas on July 25. Venezuelans have been stockpiling scarce food and water

But with Venezuela’s streets calmer than they have been for months, and the opposition still reeling from its failure to prevent the constitutional assembly from going forward, action from increasingly concerned international community represents the best chance of reining in Maduro, he added.

The government and PDVSA have around $4 billion in debt payments coming due before the end of the year but only $9.7 billion in international reserves on hand, the vast majority consisting of gold ingots that are hard to trade immediately for cash.

Venezuela has taken desperate steps to remain current on its debt throughout the economic crisis.

Maduro has blamed his enemies for spreading rumors about any impending default.