Penguin ‘nervously’ sidesteps away from a territorial duck

Don’t mind me! Penguin ‘nervously’ sidesteps away from a territorial duck

A penguin was spotted on camera sidestepping ‘like a human’ away from a territorial duck.

The footage was captured by Dutch traveller Brigitte Gijsman who was visiting Volunteer Point on East Falkland.

In the video the king penguin stands still for momentarily before nervously looking at the duck.

It then appears to casually look into the air and begins to shuffle away sideways.

The duck seems undisturbed by the penguin’s actions but continues to keep it within his sights.

The penguin manages to pull of the manouvere silently with the waves lapping on the shore being the only noise that can be heard.

The footage was captured by Dutch traveller Brigitte Gijsman. She was visiting Volunteer Point on East Falkland which is home to the second-largest colony of king penguins in the world 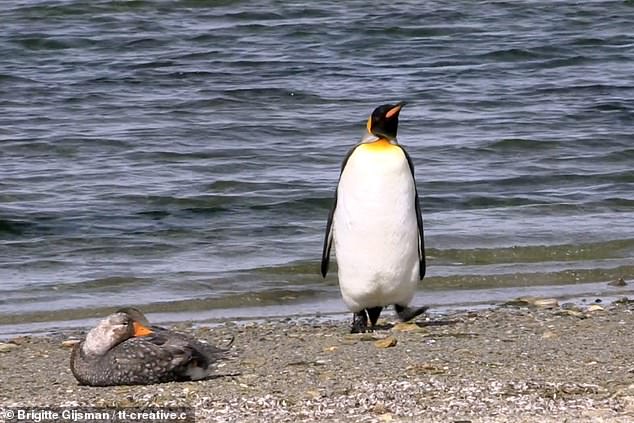 The king penguin was caught on camera standing still momentarily before nervously looking at the territorial duck. He then lifts his head into the air and begins to sidestep away

Brigitte, from Grathem, Netherlands, said: ‘I haven’t seen this kind of penguin behavior before.

‘I was surprised a penguin showed this ‘human’ behavior – there were more ducks on the beach but with this one, he stood motionless for quite some time before shuffling by.

‘It looked so funny. At first, I was just watching him and then I realised I had to film it.’ 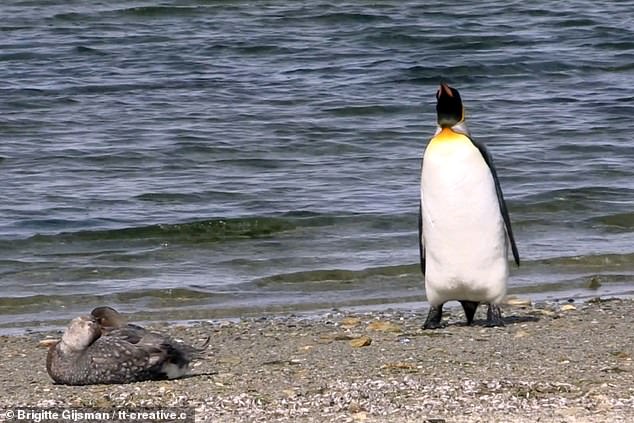 In 1971 there were only around 31 breeding pairs of king penguins on the East Falkland island.

But today there are more than 1,500. This makes it the second-largest and most accessible colony of king penguins in the world.

On average they are one metre tall and up to 16 kilos in weight. They are second in size only to the emperor penguin.