A slimmed-down mom has revealed how she’s now half the size she was on her wedding day by posing in her 24 wedding dress.

Eden Sanboeuf, 28, from Pennsylvania, tipped the scales at 305 pounds as she walked down the aisle to wed her husband Rick Sanboeuf, 27, in November 2014.

‘At the time, I was so used to being the fat girl that I didn’t stress about my weight before the wedding too much. I was more concerned about everything going right.

Wedding day: Eden Sanboeuf, 28, from Pennsylvania, tipped the scales at 305 pounds as she walked down the aisle to wed her husband Rick Sanboeuf, 27, in November 2014 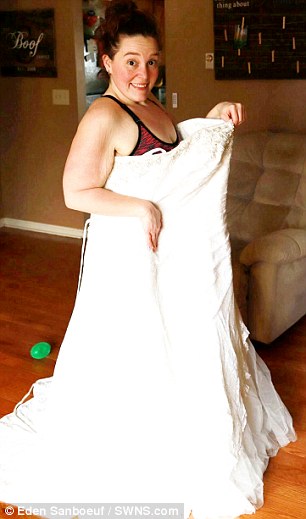 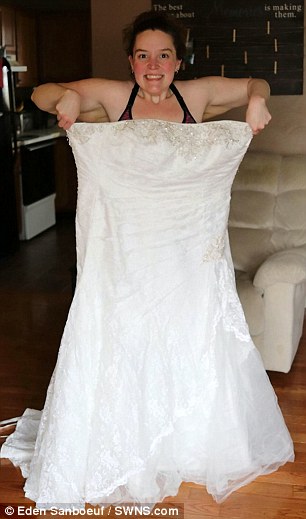 Transformation: After seeing her wedding pictures, Eden decided to lose weight and has so far lost 145 pounds – her size 24 wedding dress is now too big for her 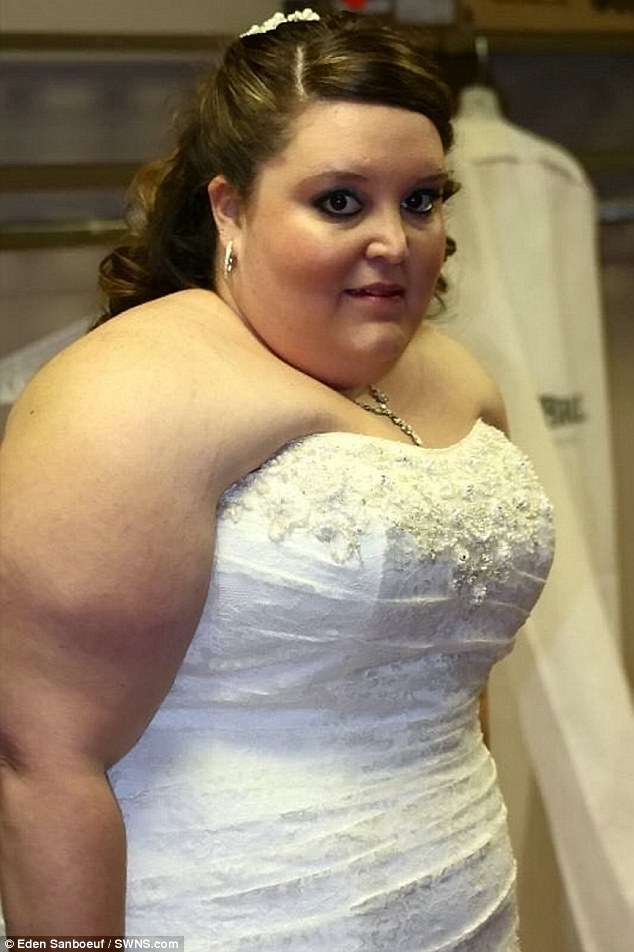 Uncomfortable: Eden didn’t feel comfortable on her wedding day as her dress was too small for her and she could ‘hardly breathe’ as she used to binge on pizza and ice cream

‘On the day though, I was not comfortable. My dress didn’t fit me right, it was actually too small. Because it was corseted they did manage to close it but I could hardly breathe.

And it was only when she received her wedding pictures back that she knew she had to make a change.

‘My friend took our wedding pictures, and when we got them back I was really disappointed in myself,’ she explained.

‘While I loved my wedding – every moment of it – I was disappointed I had let myself get to that weight at such a young age.

‘It’s supposed to be your dream day and looking at those photos I didn’t feel so great about them.’

The mom, who once gorged on take-away pizzas and pints of Ben & Jerry’s every night after dinner, recently spotted her size 24 dress hanging in her wardrobe and decided to try it on for fun.

Eden, who now weighs 160 pounds, believed the dress would be a ‘little big’ but was shocked to be so swamped in material, she had to hold it up to stop it from falling.

‘I saw my dress hanging in my closet the other day and I got my husband to take pictures. I had to hold it up while he took them because it was too big to stay up. It was so funny. 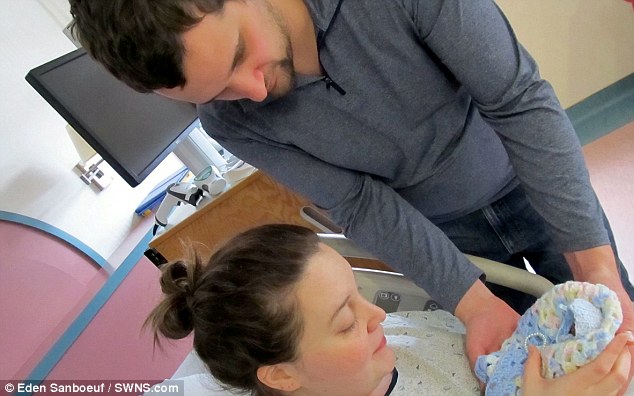 Tragedy: By the time the mom had become pregnant in October 2015, she had shed 135lbs however she sadly had to deliver her first son Wyatt stillborn at 14 weeks in January 2016 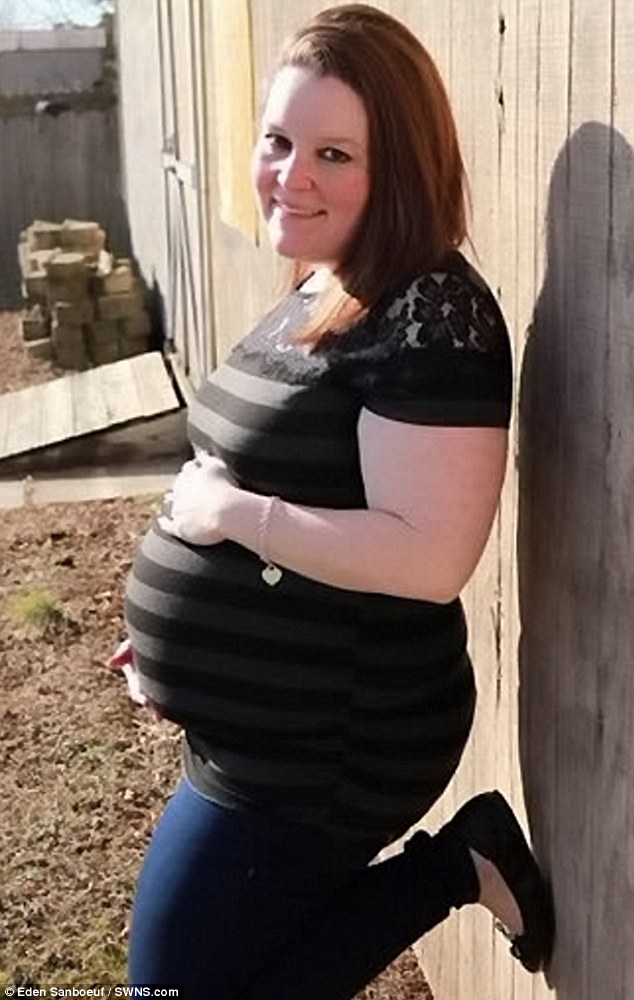 Fighter: Eden didn’t revert to her old food habits after the tragic loss of her first son and gave birth to her second son Joseph in February 2017

‘Sometimes you still feel like that 305 pounds girl even though you’ve lost all this weight but things like this really make me proud of how far I’ve come.’

By the time the mom had become pregnant in October 2015, she had shed 135lbs after overhauling her diet and taking up Zumba.

However, Eden and her husband were told at 12 weeks that their baby had a birth defect called anencephaly, a condition which inhibits parts of the brain and skull forming.

The couple tragically delivered their stillborn son Wyatt in January 2016, which Eden said was the worst experience of her life.

‘When doctors told us about Wyatt’s condition, it was the worst thing that could have ever happened.

‘I had to deliver him at 14 weeks, which was the worst thing I’ve ever had to do.’

However, the mom, who once turned to food for comfort, said her son inspired her to ‘live life to the fullest’ in his honor, and she has shed an incredible 145 pounds to date.

‘After his death, I just felt like it would be so easy to go back to my old ways, and comfort myself with food. But I just knew I had to live for him.

The couple happily welcomed her their second son Joseph in February 2017 in WellSpan York Hospital, and the stay-at-home mom says her gym-buddy tot helps her maintain her figure.

Cheer leader: Swapping pizzas for homemade chicken and quinoa salads, Eden says Joseph, now one, is her home-gym cheerleader as she works out between three and five times a week 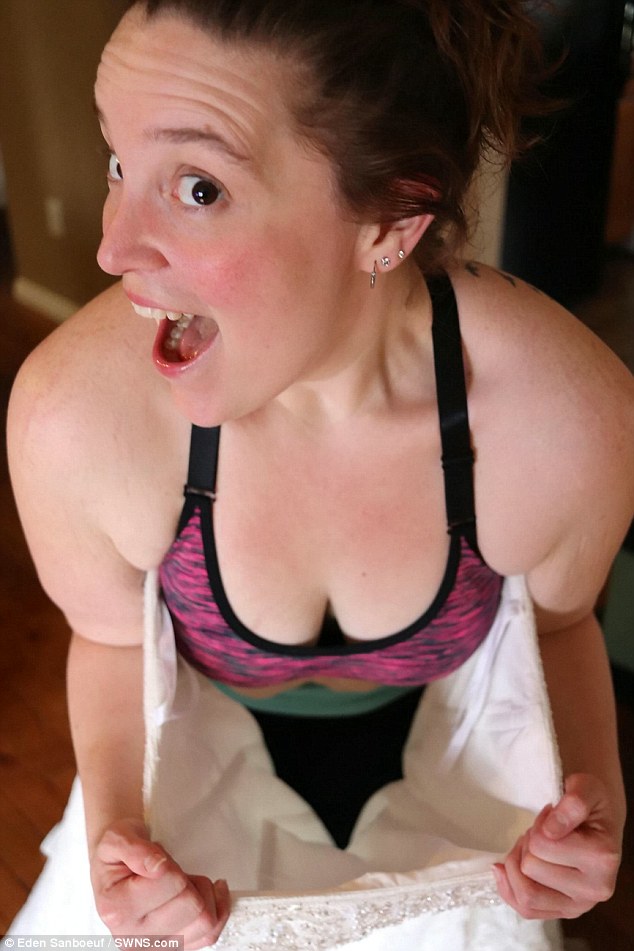 Good example: Eden is now committed to being a good example for her son and calls him her ‘little gym-buddy’ as she works out with him and the family also go on hikes

‘A year later I got pregnant with my son Joseph, my rainbow baby.

‘Holding him in my arms after losing Wyatt was such an incredible feeling. His little 7lb 5oz body.

‘I felt so lucky and knew I’d have to be the healthiest I could be for them both.’

The mom, who swapped her beloved pizzas for homemade chicken and quinoa salads, said baby Joseph, now one, is her home-gym cheerleader as she works out between three and five times a week.

‘He’s such a great little gym-buddy and hopefully I’m subconsciously instilling some good habits in him.

‘Whenever we can we go hiking as a family and we try to eat as healthily as possible. I feel very blessed to have my little family.

‘I’m really determined to live in the best way possible for my little boy and for the one I sadly lost. I think about him every single day.’