American teenager Kyle Giersdorf won $3million on Sunday after taking the top prize in a tournament in New York for the popular online video game Fortnite.

Giersdorf, 16, from Pennsylvania, was one of at least 100 players competing for $30million in total prize money, as the booming popularity of video and online games has drawn top-dollar investments and fueled the emerging professional sport.

Kyle Giersdorf, aka ‘Bugha,’ holds the trophy after winning the solo competition at the 2019 Fortnite World Cup at Arthur Ashe Stadium in Queens, New York on Sunday 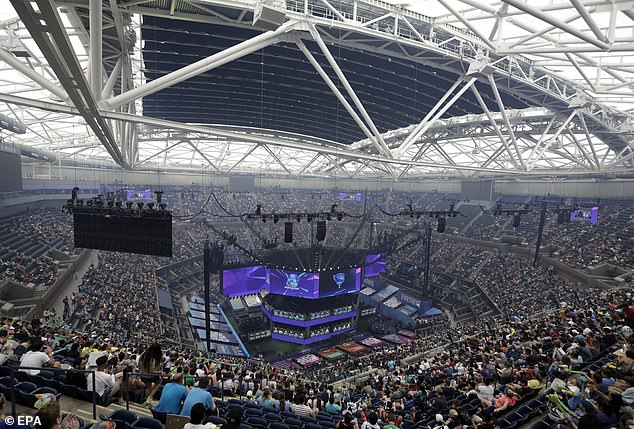 The tennis stadium, which hosts the United States Open, was nearly packed during the final day of the three-day event

‘Words can’t even explain it. I’m just so happy,’ Giersdorf said in an interview at the event at Arthur Ashe Stadium in Queens, New York, posted by organizers on Twitter.

‘Everything I’ve done, the grind, it’s all paid off. It’s just insane.’

Giersdorf did not immediately respond to a request for comment.

Global revenues from esports, or professional video game competitions, will hit $1.1billion in 2019, up 27 percent since last year, thanks to ballooning revenues from advertising, sponsorship and media rights, according to a report released earlier this year.

Overall, the global video and electronic games market, excluding revenues from esports, will generate $152.1 billion in 2019, up 9.6% over last year, according to a report by gaming analytics firm Newzoo.

Jaden Ashman, 15, from Essex, United Kingdom, and his mother are seen on Saturday after winning second place in the duos championships

On Saturday, a 15-year-old British teen from Essex took home more than $1million after he and his Dutch partner won the duos section.

The 15-year-old competed under the name Wolfiez.

Jaden told the BBC: ‘Me and my mum, we clash quite a lot. Like, she didn’t understand how it worked, so she thought that I was spending eight hours a day in my room just wasting my time.

‘So now that I’ve proved to her that I can do stuff, I’m really happy.’

His mother, Lisa Dallman, told the BBC: ‘If I’m honest with you I’ve been quite against him gaming. I’ve been more pushing him to his schoolwork.

‘I’ve actually thrown an XBox out, snapped a headset, we’ve had a nightmare.

‘And then leading up to the games, getting his visa, we had problems with that so we had a week of a nightmare.

‘Then the dog ate his birth certificate, so – and this is not a joke – this actually really did happen.

‘And then my work messed up my wages, so three things went wrong before we started heading here so I knew we were on an even keel and everything was going to go right.’