Sir Rod Stewart gave fans a glimpse at his family Christmas as he shared a sweet snap of himself with wife Penny Lancaster and their son Alastair on Instagram on Saturday.

The trio could be seen posing in front of their tree in the picture posted on Christmas Day, with Sir Rod, 76, wearing a smart brown suit and checked waistcoat as he rested his head on his son’s shoulder.

Penny, 50, looked glamorous in a glitzy sky blue dress with a plunging neckline and front split, while she wore minimal make-up to show off her natural beauty.

She raised her knee as she stood barefoot in front of the beautifully decorated tree.

Alistair, 16, donned smart but casual attire, opting for a white shirt with a black stripe down the side.

He wore pair of black trousers as he stood with her arm around his mother’s shoulder while wearing a grey scarf. 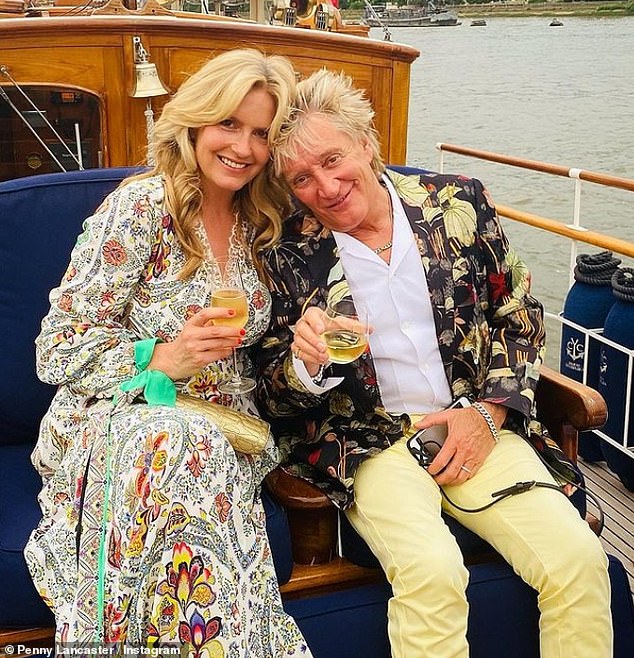 Family affair: Rocker Sir Rod also shares son Aiden, 10, with Penny, although he was not with his parents in the Christmas picture

The rocker also shares son Aiden, 10, with Penny, although he was not with his parents in the picture.

Musician Sir Rod also shared an image of himself posing alongside a self portrait while holding a trombone in his hand. 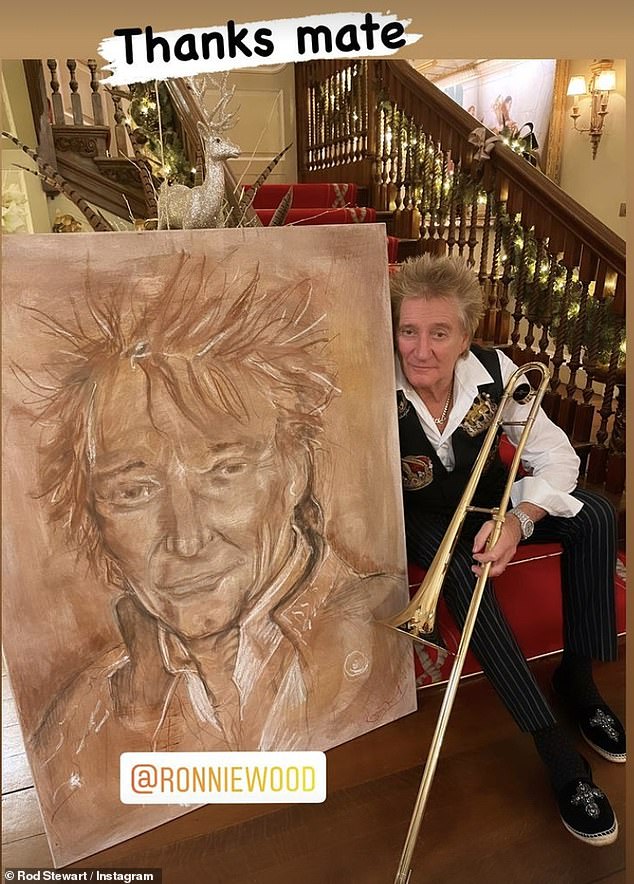 Work of art: Sir Rod also shared a picture of himself posing alongside a self portrait, tagging Ronnie Wood in the image, suggesting the painting was a gift from the Rolling Stones star

He captioned the snap ‘thanks mate’ and tagged his Rolling Stones bandmate Ronnie Wood, 74, suggesting it was a gift from the star.

Sir Rod and Penny enjoyed a festive family meal with their two sons at The Ritz in London on Friday.

Penny looked sensational in a glitzy black mini dress as she posed for a photo with Alastair, 16, and Aiden, 10. 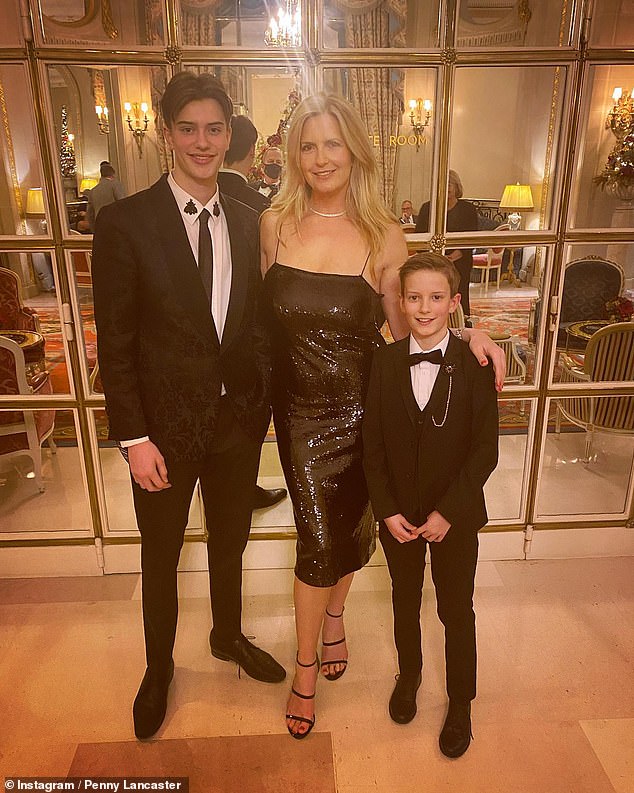 Holiday celebrations: Penny shared a rare photo of her sons in a very glamorous festive snap as she dined with husband Rod Stewart at the Ritz on Friday

The boys looked dapper in black tuxedos as they smiled for a sweet snap with their mother.

Penny, wore her blonde hair down in a straightened style as she accessorised with a pearl choker and added height to her frame with black strappy heels.

In another photo, Sir Rod posed alongside his sons and as they celebrated his older sister’s birthday. 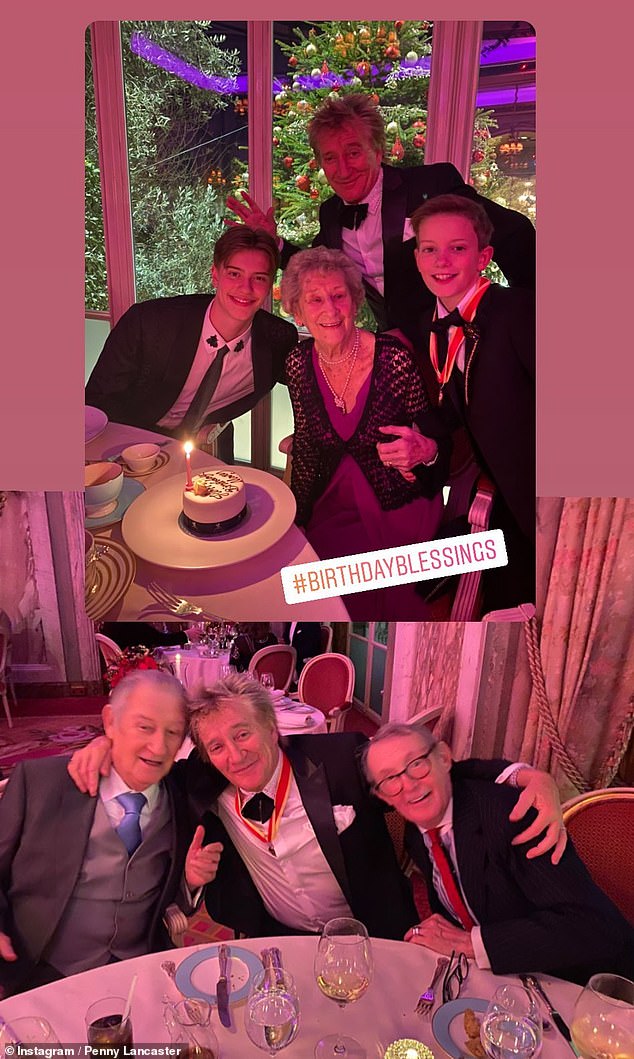 Blessed: In another photo, Sir Rod posed alongside his sons and as they celebrated a family member’s birthday

Sir Rod put on an equally as smart display as he wore an onyx blazer with satin detailing and a dickie bow tie while rocking his iconic spiky coiffure.

Taking to Instagram, Penny wrote: ‘My boys are all grown up.’

Their outing comes after Rod received backlash from Royal Variety viewers who accused him of putting on an ‘awful’ and ‘outdated’ performance last Sunday evening.

Reaction: Viewers headed to Twitter to voice their opinions after he received backlash from Royal Variety viewers, last week

The hitmaker performed during the annual event – which was hosted by Alan Carr – alongside other stars including Ed Sheeran, Anne Marie and Years & Years.

But ITV viewers admitted they were left disappointed by Sir Rod’s performance, weeks after having a similar reaction to his Graham Norton Show appearance.

One person said: ‘No but Rod Stewart is absolutely woeful on the Royal Variety performance. Must have wrote that song on the way there.’

Another joked: ‘Not sure why the Royal Variety performance is on our TV but it is just seen Rod Stewart was like someone’s nan doing bad karaoke.’

A third said: ‘I think someone should take Rod Stewart aside and say hey mate I think it’s time to bow out. It’s becoming embarrassing.’ 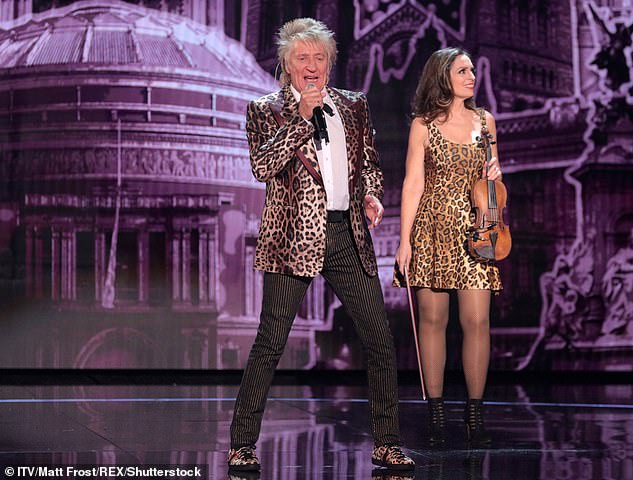 Not meeting expectations: ITV viewers admitted they were left disappointed by Sir Rod’s performance, weeks after having a similar reaction to his Graham Norton Show appearance (pictured at The Royal Variety Performance)