Tributes have been flooding in for Penny Marshall who passed away on Monday at the age of 75.

‘Simply heartbroken’ wrote comedian O’Donnell, 56, who starred in Marshall’s 1992 film A League of Their Own.

The actress also shared a clip of a Kmart commercial she starred in with Marshall in 1996.

Gone too soon: Actress and director Penny Marshall passed away on Monday from complications caused by her diabetes. She was 75 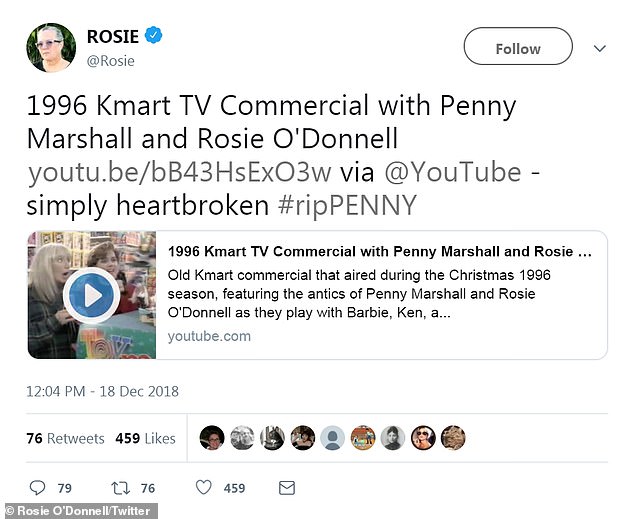 ‘Simply heartbroken’: Comedian Rosie O’Donnell shared a clip that the duo once starred in together 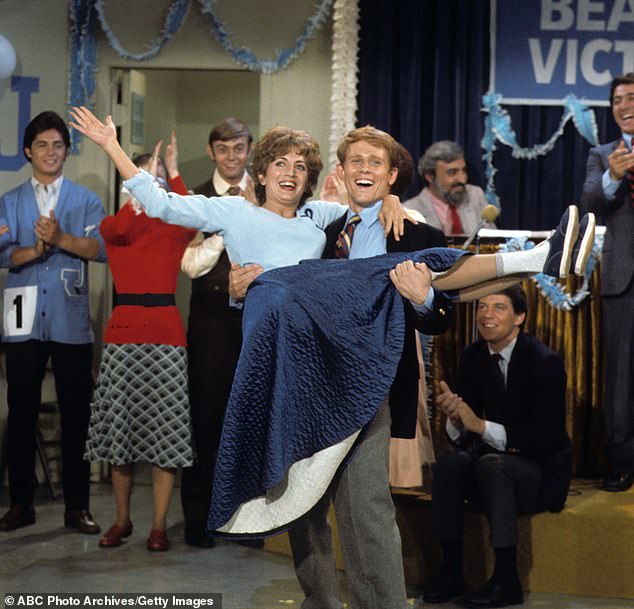 Marshall’s former Happy Days co-star Ron Howard tweeted: ‘She was funny & so smart. She made the transition from sitcom star to A List movie director with ease & had a major impact on both mediums. All that & always relaxed, funny & totally unpretentious.’

The 64-year-old director added: ‘I was lucky to have known & worked with her.

Mark Wahlberg, who starred in Marshall’s Renaissance Man, posted a photo of them together along with his touching tribute.

‘Rest in peace, Penny. Such a wonderful, funny and talented lady. Without her support and encouragement, I would not be where I am today. She will be missed.’ he wrote. 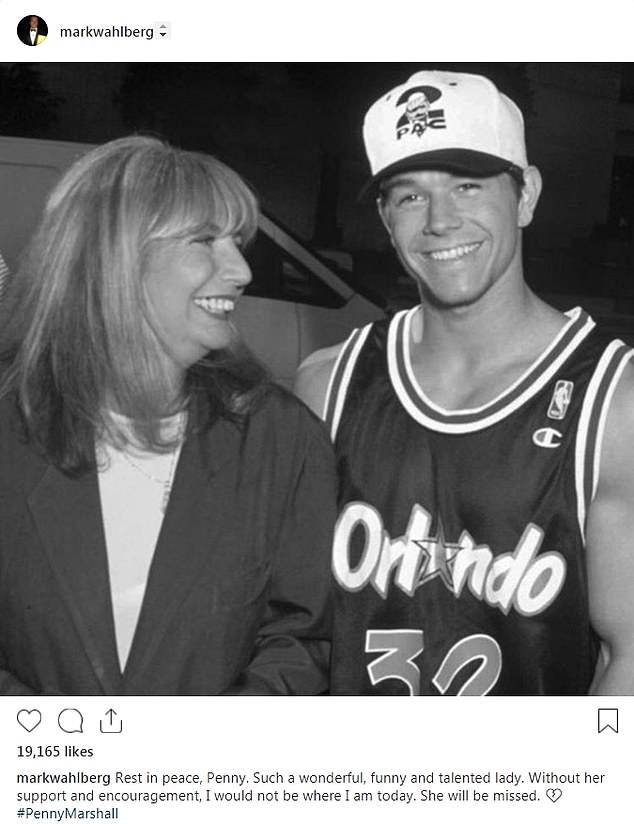 Mark Wahlberg, who starred in Marshall’s Renaissance Man, posted a photo of them together along with his touching tribute 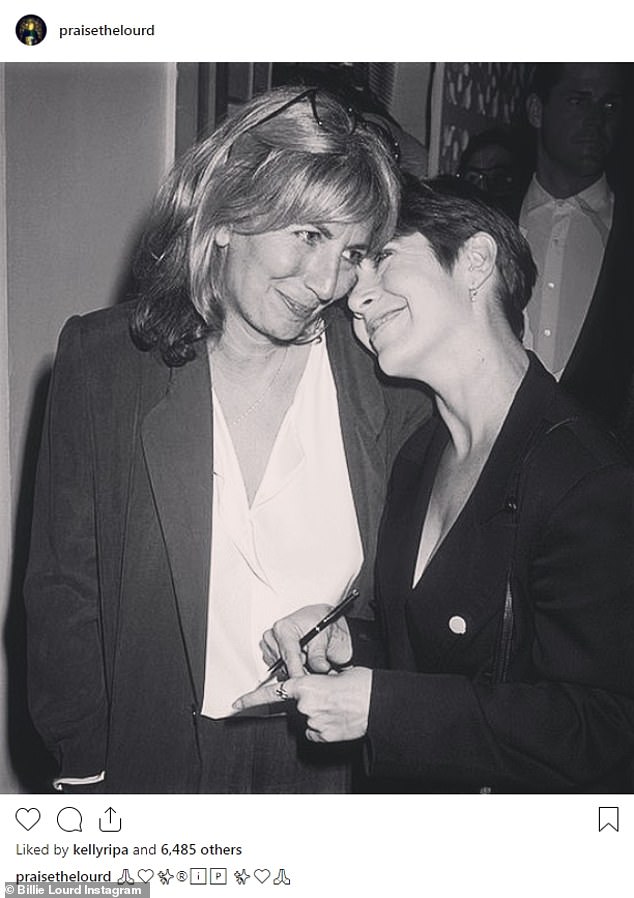 ‘A great comedienne’: Billy Crystal paid tribute to his ‘dear friend’ in a sweet tweet

Tom Hanks, who was directed by Penny in 1988’s Big, wrote on Twitter: ‘Goodbye, Penny. Man, did we laugh a lot! Wish we still could. Love you. Hanx.’

Tom Hanks, who was directed by Penny in 1988’s Big, wrote on Twitter: ‘Goodbye, Penny. Man, did we laugh a lot! Wish we still could. Love you. Hanx.’

Hanks also starred in Marshall’s hit A League of Their Own opposite Geena Davis who also posted a touching tribute.

‘I’m terribly sad to hear the news about Penny passing.’ the actress tweeted via the Geena Davis Institute. ‘My heart goes out to Tracy Reiner and her family.’

Davis added in her statement: ‘Penny brought so much joy to so many and will be sorely missed. I will be forever grateful to her for letting me be a part of A League of Their Own.’

Actor Billy Crystal, 70, wrote on Twitter: ‘Sad to hear of Penny Marshall’s passing. a great comedienne a terrific director and a dear friend.’ 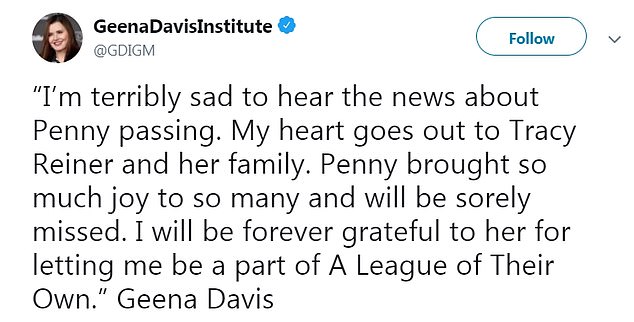 Honored: Actress Geena Davis expressed her gratitude to Marshall for directing her in A League of Their Own

Emotional: Oscar winner Violas Davis thanked the icon for her contributions in the industry that paved the way for other women 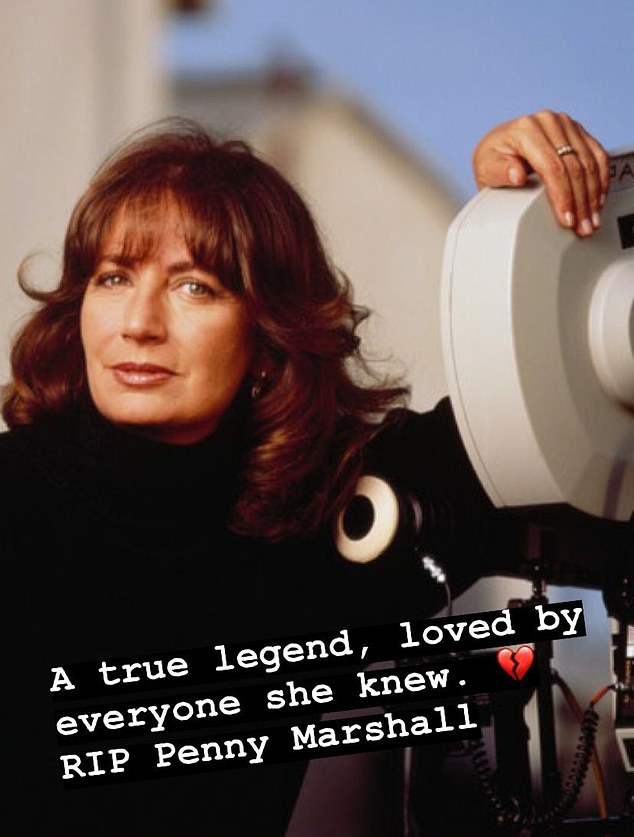 Broken heart: ‘A true legend, loved by everyone she knew’ wrote Halle Berry

Danny DeVito shared a touching note which read: ‘Penny Marshall was a sweet woman. I was very fortunate to spend time with her. So many laughs. She had a heart of gold. Tough as nails. she could play round ball with the best of them. Always All love, D’.

Actress Viola Davis tweeted: ‘RIP Penny Marshall!! Thank you for what you contributed to us girls. Grateful to have worked with you. Rest well you great Broad!!!’

Halle Berry took to Instagram to pay her repects to the ‘true legend, loved by everyone she knew.’

Star Trek’s William Shatner hailed Penny ‘a true treasure’ as he shared a snap of the duo on set.

One of the most touching tributes came from Star Wars icon Carrie Fisher’s daughter Billie Lourd who shared a black and white photo of Fisher and Marshall together affectionately touching heads.

‘Fortunate’: Danny DeVito expressed his gratitude at being able to spend time with the actress 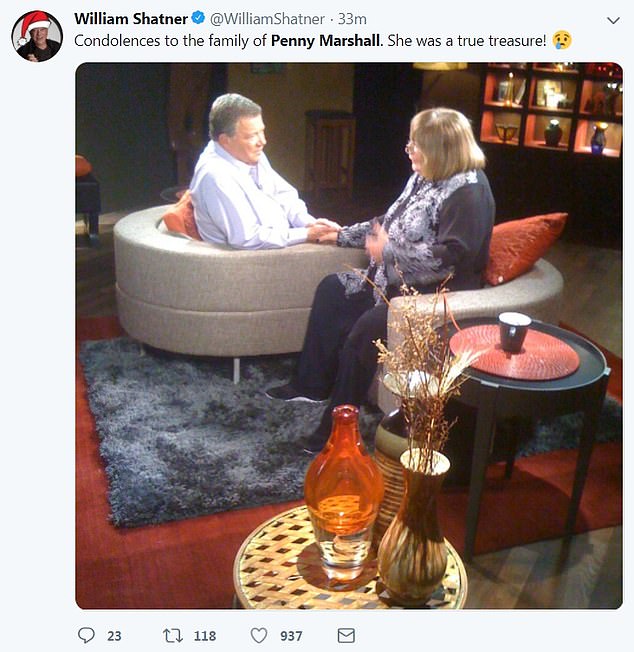 Marshall and Fisher struck up a friendship in the late 1970s and were so close that they would throw elaborate joint birthday parties together attracting many of the biggest names in Hollywood.

Marshall’s ex-husband Rob Reiner, a fellow actor and movie director who she was married to from 1971 to 1981, wrote on Twitter: ‘So sad about Penny’ before following up with a longer tribute. 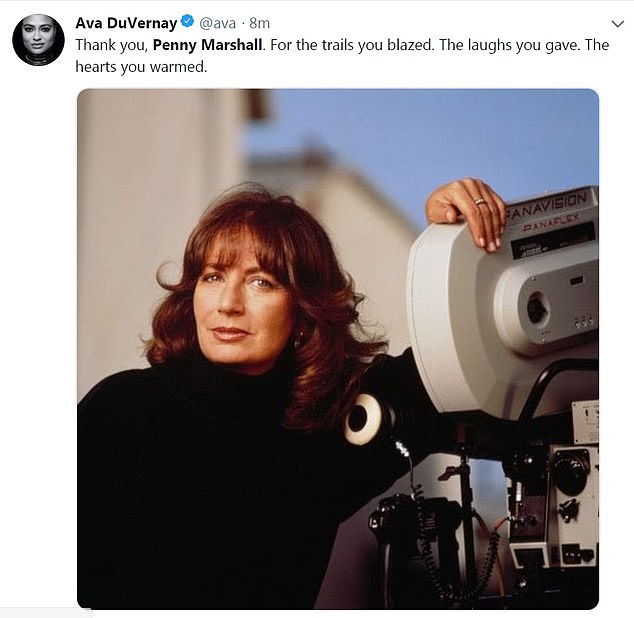 Trailblazer: Selma director Ava DuVernay posted a throwback snap of Penny along with a touching tribute

End of an era: Actress Bette Midler was saddened to hear of the loss of Penny just two years after the loss of her brother Garry

‘Thank you’: Busy Philipps was one of the first stars to pay tribute to Marshall

‘Well 2018 what a f***ed up thing to do on your way out, take out lovely Penny Marshall. RIP dear Penny.’ came the message from songwriter Diane Warren. 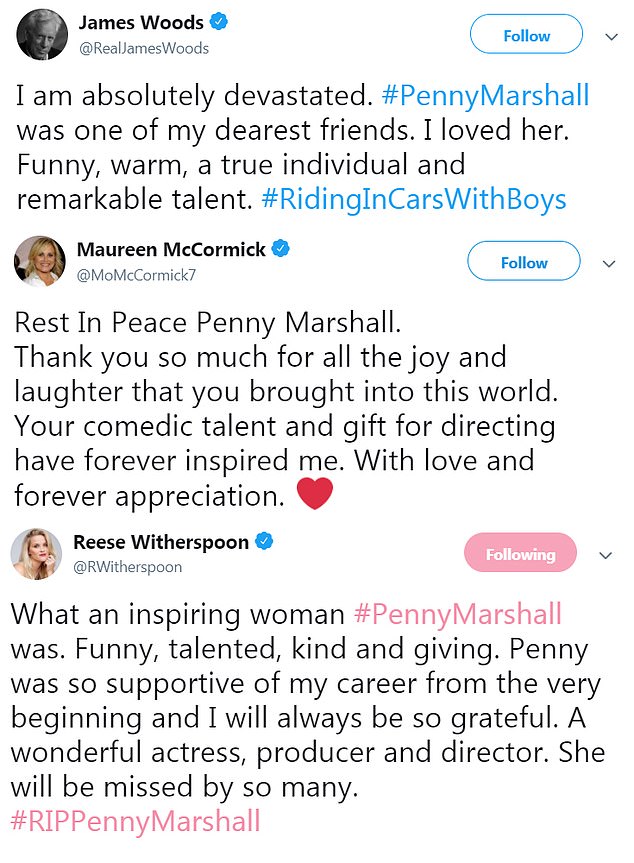 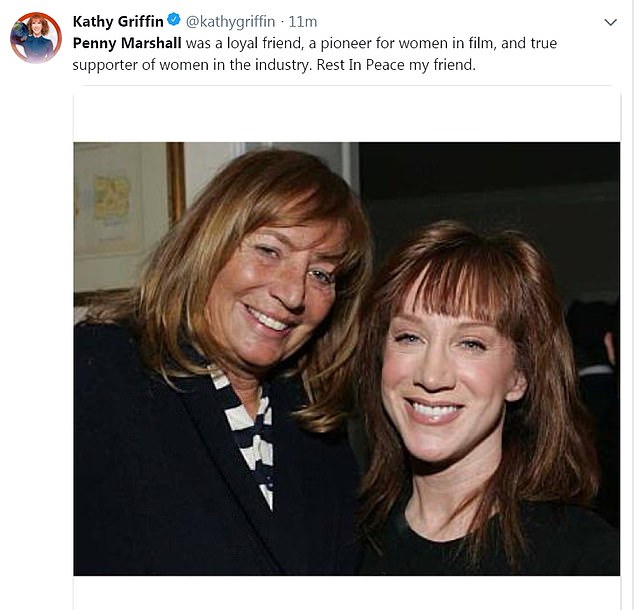 Respect: Comedienne Kathy Griffin shared a photo of herself with Marshall calling her a ‘pioneer’ 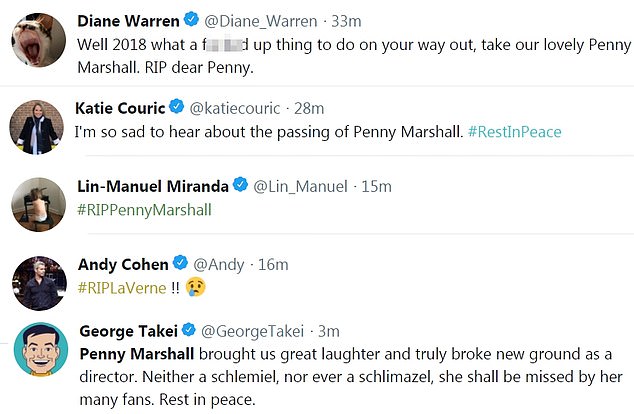 ‘So sad’: The Goonies star Sean Astin paid tribute as he recalled watching Marshall on Laverne & Shirley when he was a kid 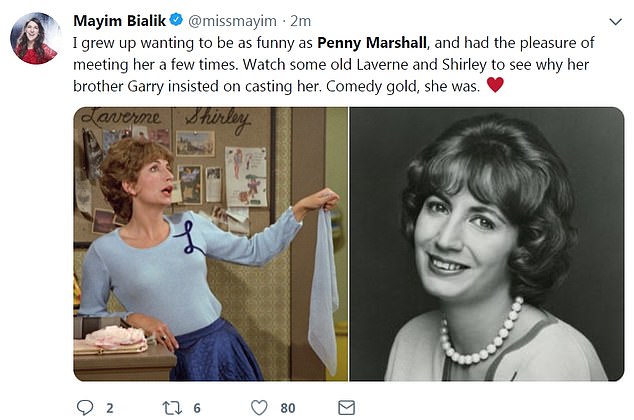 ‘She loved movies’: Russell Crowe shared fond memories of the actress and director

Star Trek alum George Takei wrote a heartfelt message soon after the news broke, which read: ‘Penny Marshall brought us great laughter and truly broke new ground as a director. Neither a schlemiel, nor ever a schlimazel, she shall be missed by her many fans. Rest in peace.’

Marshall died at her Hollywood Hills home on Monday from complications caused by her diabetes, Marshall’s publicist revealed Tuesday.

Marshall shot to fame on the series Laverne & Shirley before going on to direct hit films including Big and A League of Their Own.

‘Our family is heartbroken over the passing of Penny Marshall,’ her family said in a statement.

‘One of a kind’: 1990s heartthrob Jason Priestley, who starred in Marshall’s movie Calendar Girl, had some kind words to share

‘She broke the mold’: Actress Olivia Munn shared her favorite quote from Marshall and gushed about her talents 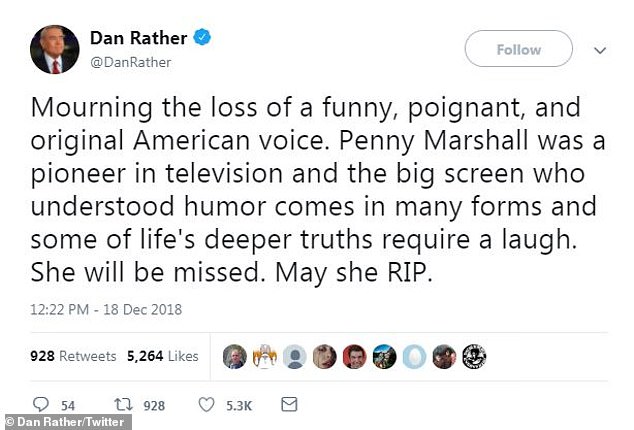 Honored: Journalist Dan Rather wrote a heartfelt message calling Penny ‘a pioneer in television and the big screen’ 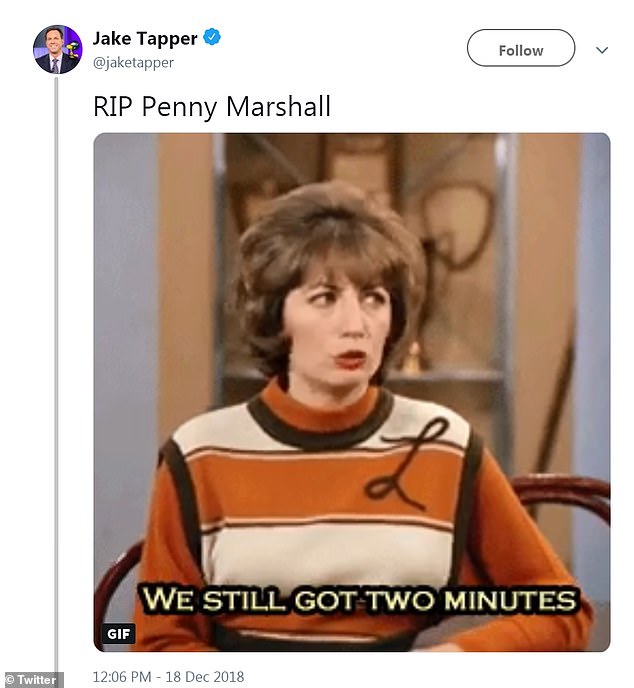 ‘Penny was a tomboy who loved sports, doing puzzles of any kind, drinking milk and Pepsi together and being with her family.’

She is survived by her daughter Tracy and five grandchildren.

Marshall’s death comes a little over two years after the passing of her brother, Garry Marshall.

Garry was the creator of Happy Days, the show that eventually spawned the spin-off Laverne & Shirley.

Marshall had been diagnosed with lung cancer in 2009 which metastasized to her brain, but announced in 2012 that she was in remission. 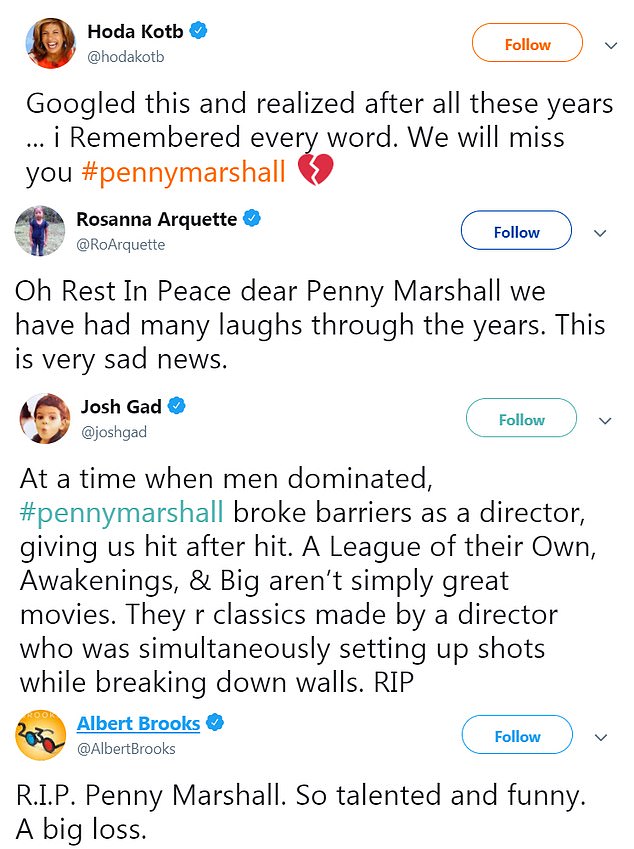 Much loved: The tributes kept flooding in on Tuesday just hours after her passing 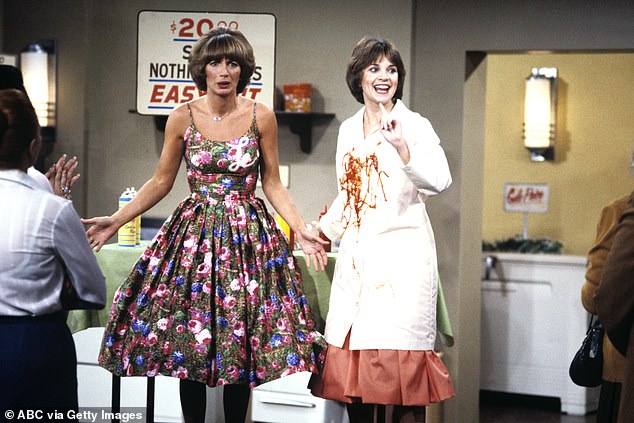