Cleary had spent the night partying after the Panthers’ NRL grand final triumph against the Parramatta Eels on Sunday night.

When asked how it felt to celebrate the win with his father, Panthers coach Ivan Cleary, he said: ‘It makes it a little bit more special, but in saying that, it’s more about the group.’ 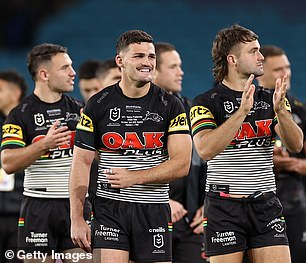 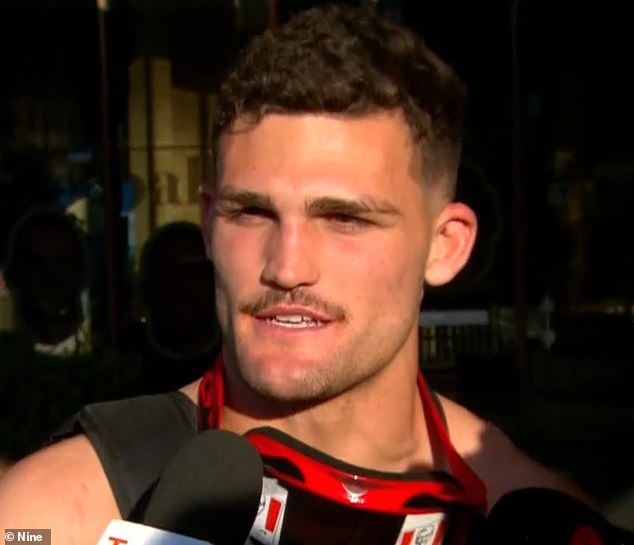 He added he was ‘going home for an hour’s sleep’ before the club’s fan day.

‘Looking forward to it. That’s why I’m going home for an hour’s sleep. I will enjoy it more,’ he said.

‘I think it’s cool Para, and Penrith were able to present in a grand final, Western Sydney, you know, through and through. It’s never happened before. They’re both footy crazy. It’s pretty cool.

‘This is what you work hard for. At the start of the year, you have the goal to try to get to this stage just to compete for the final, and you know we did that this year.

‘We were lucky enough to win it. We’ve done it for the last three years. We lost one, won two. I definitely know what I prefer more. 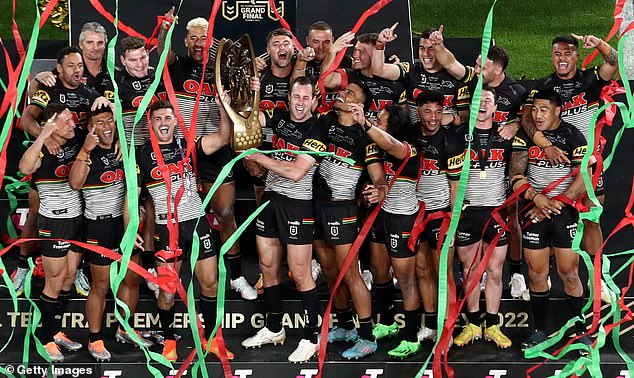 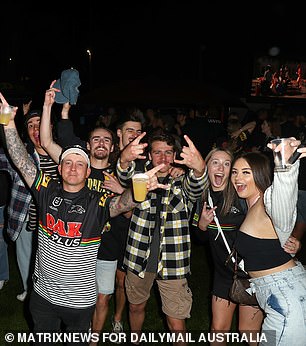 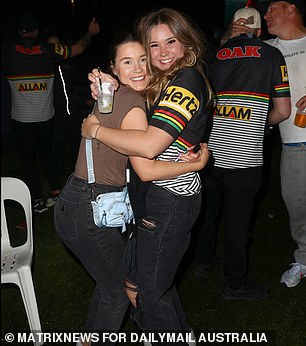 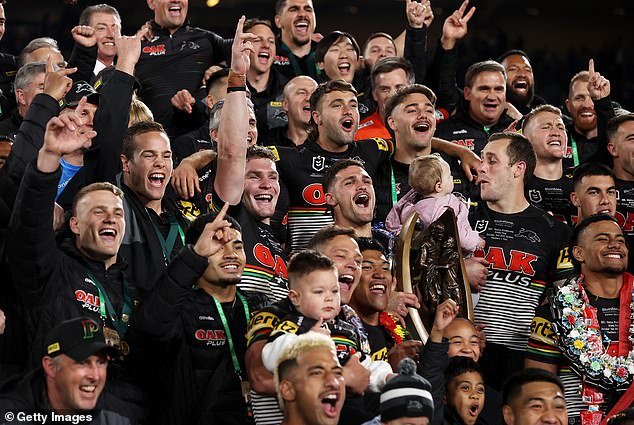 ‘I just want to say massive thank you to the fans. Couldn’t do it without you guys. Thank you for all the support.’

Cleary joked that he managed to avoid damaging this year’s grand final trophy because: ‘I don’t want the fines’.

His teammates shared clips and photos of their wild victory night online.

Apisai Koroisauwas pictured showing off premiership rings before being brutally shut down for his plans to leave the team in 2023.

‘You won’t win them at the Tigers,’ his teammate joked.

Viliame Kikau will also be leaving the team next year alongside assistant coaches Andrew Webster and Cameron Ciraldo. 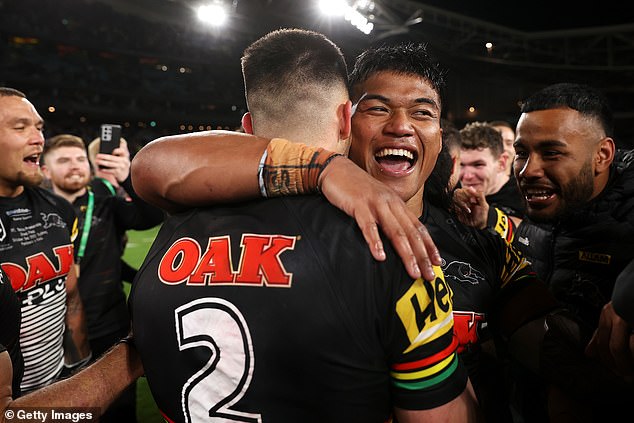 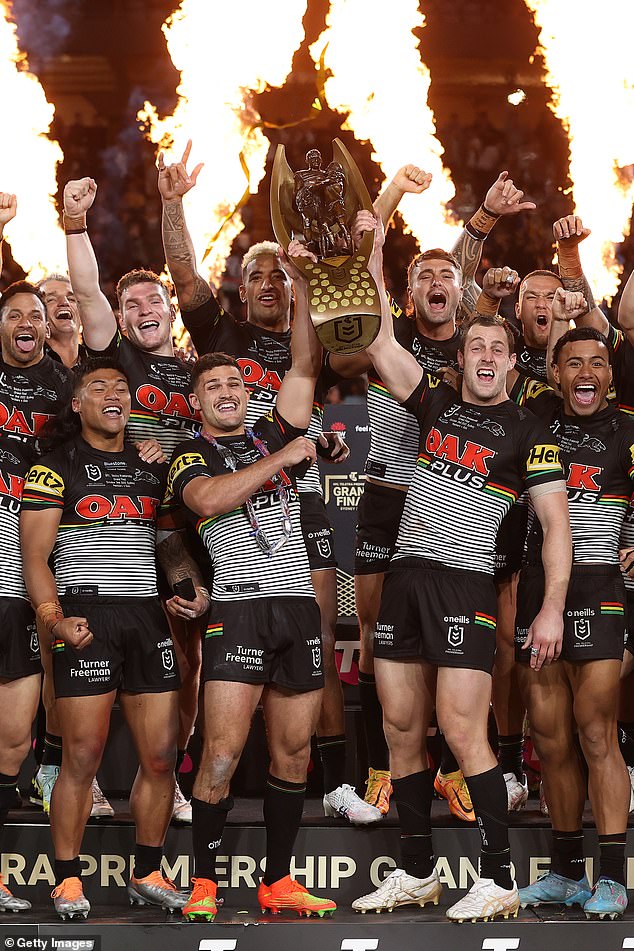 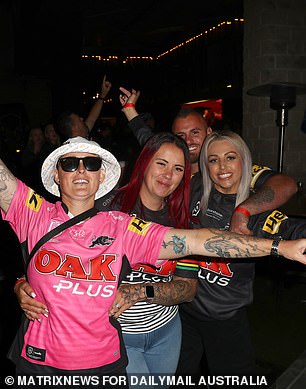 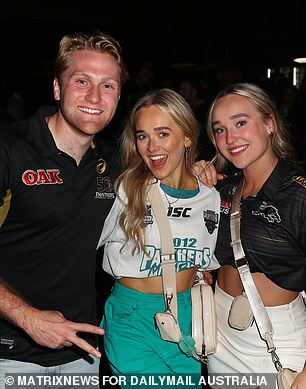 Coach Ivan Cleary said the team members would be missed next season.

‘It’s hard to put it into words. It’s definitely been an emotional 24 hours, I got a bit emotional yesterday. I don’t even know why,’ Cleary told the Sydney Morning Herald.

‘I think it’s because of this moment in time. This team won’t stay together, it’s just such a great opportunity. You just want it to go well on the big night and I couldn’t have asked for anything more, the boys were unbelievable.

‘It’s very sad that players and coaching staff won’t be together again.’

UFC star Bam Bam Tuivasa joined in on the fun and was recorded doing a shoey with the team following the match.

Five-eighth Jarome Luai posed for a photo with the trophy while smoking a cigar. 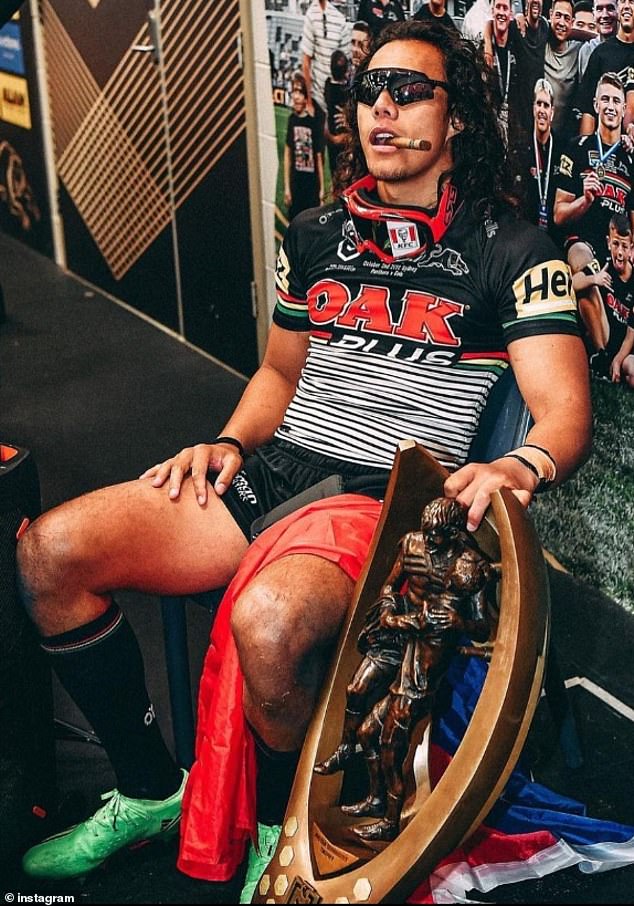 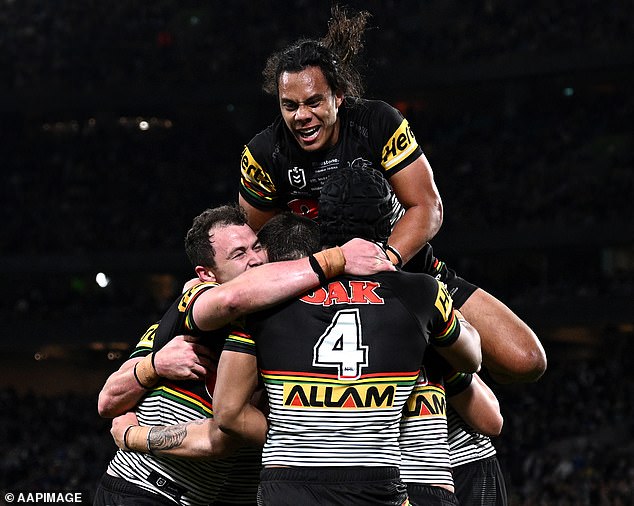 Panthers Chairman Matt Cameron said the win was extra special because it was on home turf (pictured, Jarome Luia and teammates celebrating)

‘The boys came back last night and had a function. They’re still upstairs somewhere. We’re across the road at the stadium. It’s going to be a good day,’ he told Today.

‘Obviously in 2020 we did it with reduced capacities at the ground and at the leagues club in 2021 they were in Brisbane.

‘The community didn’t get to celebrate it the way they wanted to. Last night was a great opportunity. You have heard Ivan speak before, we pride ourselves on the club being a source of community pride. I think we were able to tick that box last night.’ 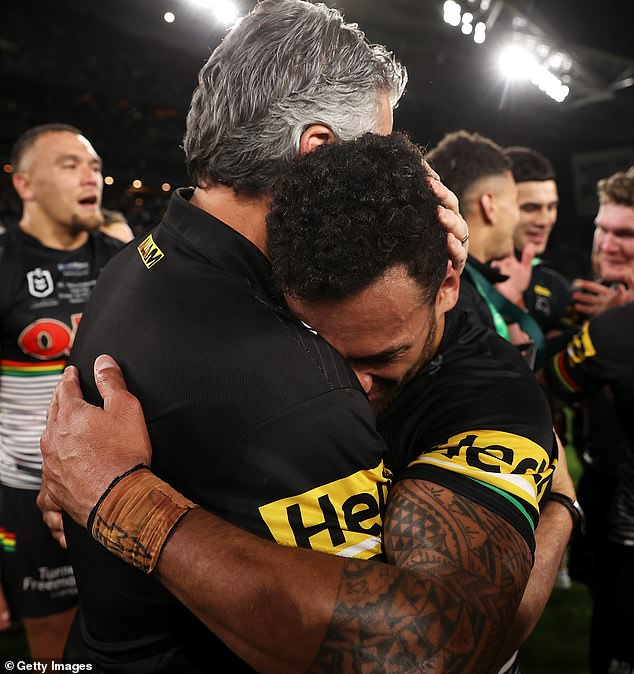 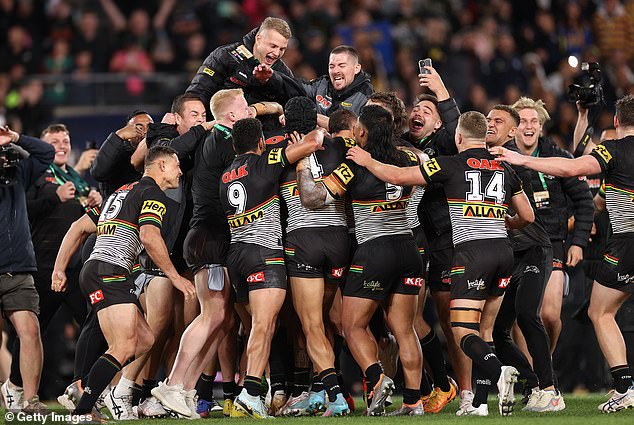