The Penrith Panthers have shown they can party as hard as they play as extraordinary footage of their Mad Monday celebrations begins to emerge.

After claiming the NRL premiership on Sunday night with a hard-fought 14-12 win over the South Sydney Rabbitohs at Suncorp Stadium, the Panthers’ ‘generation next’ stars have been drinking to their achievement ever since.

After partying all night and knocking back breakfast beers at the beach across the road from their Twin Waters hotel at dawn, the squad continued celebrations at BlackFlag Brewing in Moololaba.

In a clip going viral on TikTok, winger Stephen Crichton is seen shirtless in a Lakers cap and holding a cocktail glass while rapping to Stormzy’s hit Shut Up.

In the background, teammate Moses Leota appears to be asleep while sitting on a bar stool, while five-eighth Jarome Luai and another player try to talk to him.

Backrower James Fisher-Harris is seen in the background still dressed in his full playing kit, including knee guard.

‘Leota in a different dimension,’ one person commented on the post.

Prop forward Moses Leota looked ready for bed at a brewery on Monday, as teammates continued to try and talk to him 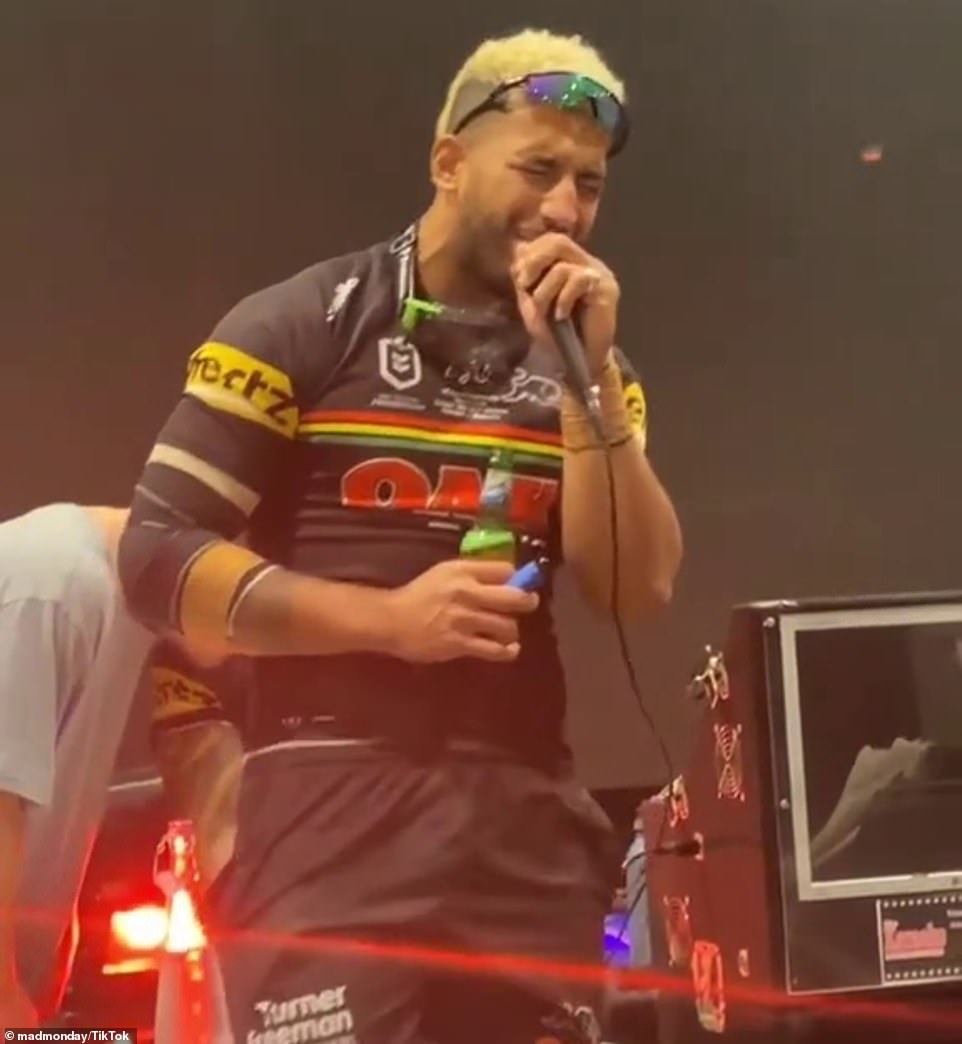 Panthers forward Viliame Kikau was filmed performing karaoke, with a beer and vape in hand

In another video, Panthers enforcer Viliame Kikau is seen in his playing kit while murdering a karaoke song.

Kikau wears two pairs of sunglasses on his head and around his neck while holding a beer and a blue disposable vape.

He appears to still have strapping worn during the game on his forearm and wrist.

Early on Monday morning social posts showed the Panthers heading down to a Sunshine Coast beach to watch the sunrise after their epic victory in the NRL decider.

The team took the distinctive Provan-Summons NRL trophy with them, the club’s first title since 2003.

Halfback Nathan Cleary – awarded the Clive Churchill Medal for the best player in the grand final – is seen shirtless with strapping from the game still on his shoulder.

‘Hey champs, how’s it going?’ an unidentified player asks as Cleary and teammate Isaah Yeo, drinks in hand, show off their premiership rings.

Cleary also posted videos to his Instagram story on Monday morning showing the Panthers players gathered at the beach.

Players were sprawled out on the sand and on a walkway with cases of beer and wine bottles as their celebrations continued. 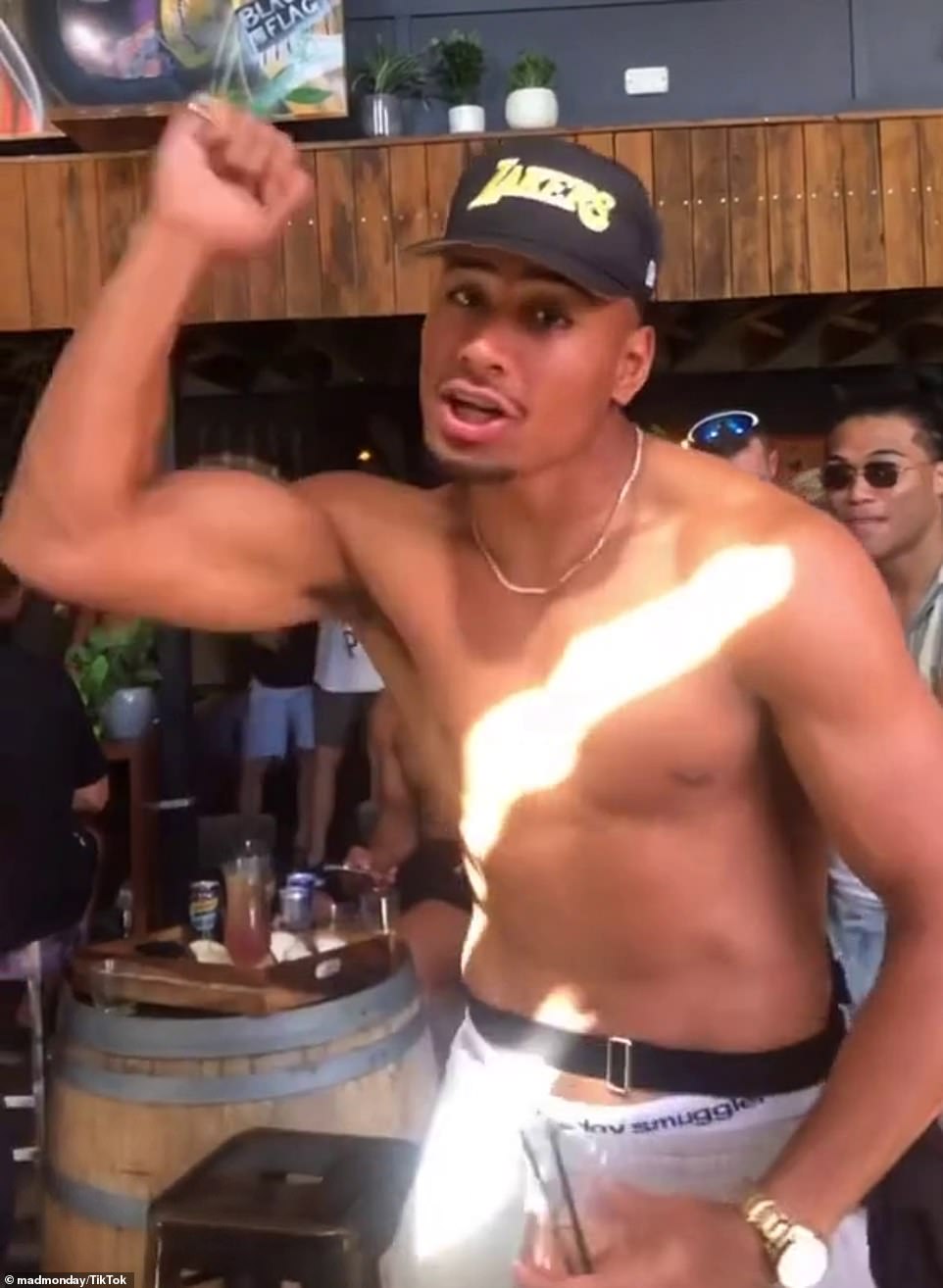 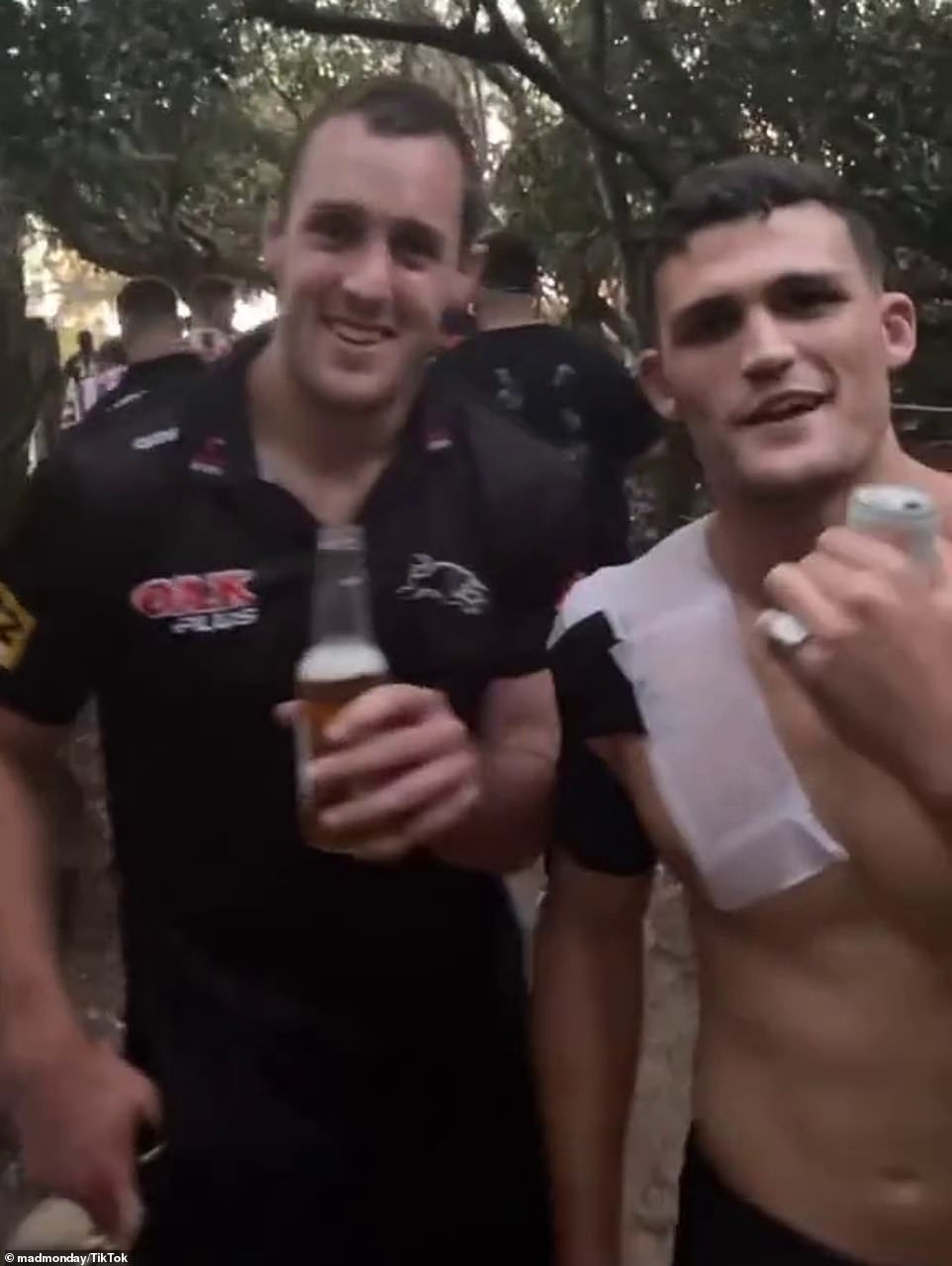 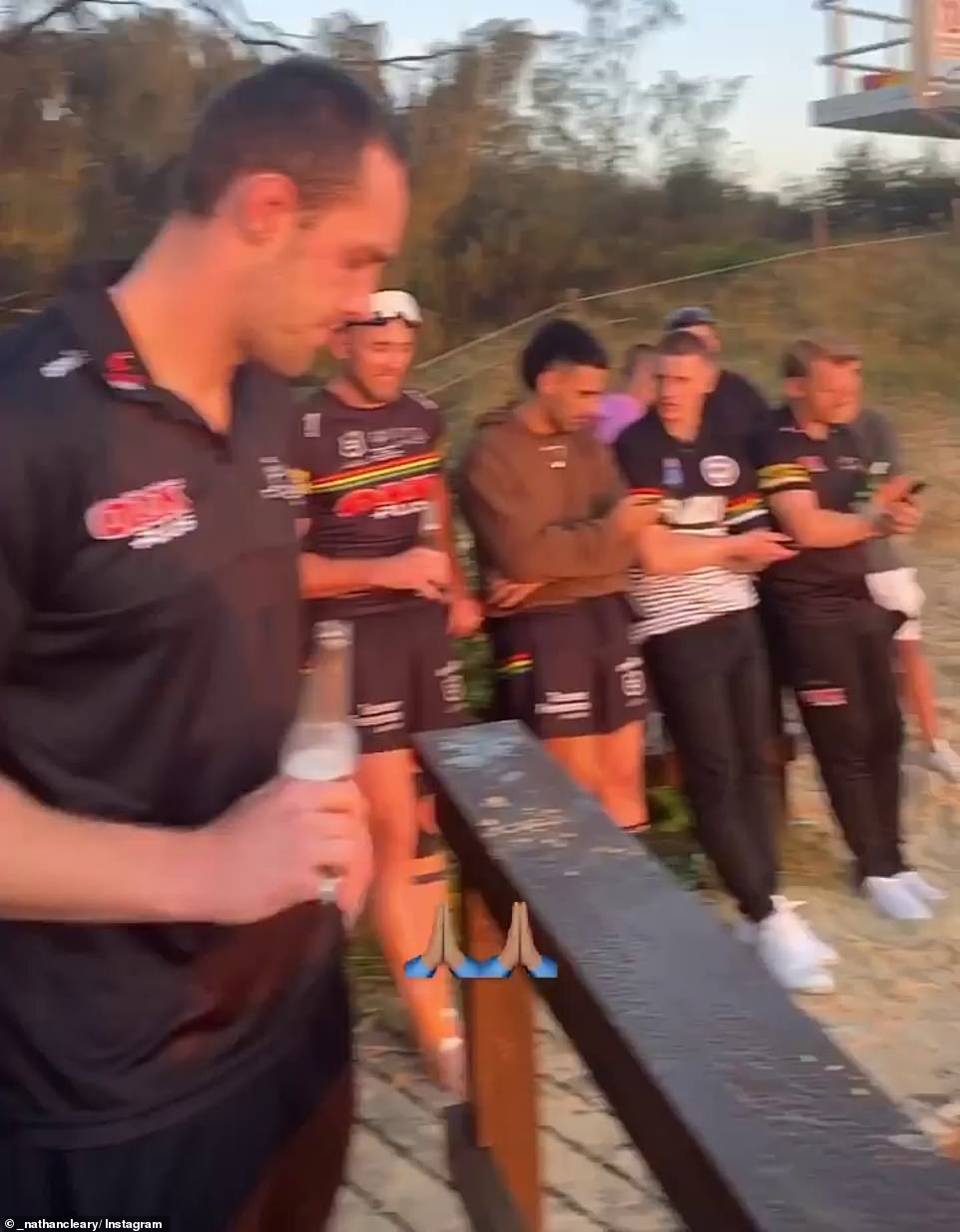 The Panthers had been based at the Sunshine Coast since the NRL competition was relocated to Queensland mid-season.

One of the youngest teams in the NRL, the Panthers’ victory was built on combinations formed as many of the players grew up together in Mouth Druitt, in Sydney’s west.

Players such as Jarome Luai, Brian To’o, Stephen Crichton and Tyrone May grew up playing football together in the western suburbs, creating a bond that has taken them all the way to the title.

Luai told The Daily Telegraph he and To’o had planned an impromptu street parade around Mount Druitt.

‘I’m going to take it where ever I can, around the whole of Mt Druitt if I can,’ he said.

‘Bizza [To’o] doesn’t even drive, so I don’t know what car he is planning to take it [the trophy] in.

‘We have electric scooters, so we’ll cruise around Mounty for a couple for days.’

Crichton revealed that team-mate Mitch Kenny had turned into a ‘human alarm’ when the team headed back to its Sunshine Coast base after the match on Sunday night.

‘Every five minutes it would go quiet because the boys were trying to get some rest, but Mitch was screaming all night,’ Crichton said.

‘The boys are trying to close their eyes to have little nap but he was rubbing their head and stuff.’

The Rabbitohs had earlier greeted fans on the Gold Coast after their brave two-point loss.

The celebrations ended a season in which the competition was almost called off due to Covid-19 restrictions before it relocated to Queensland. 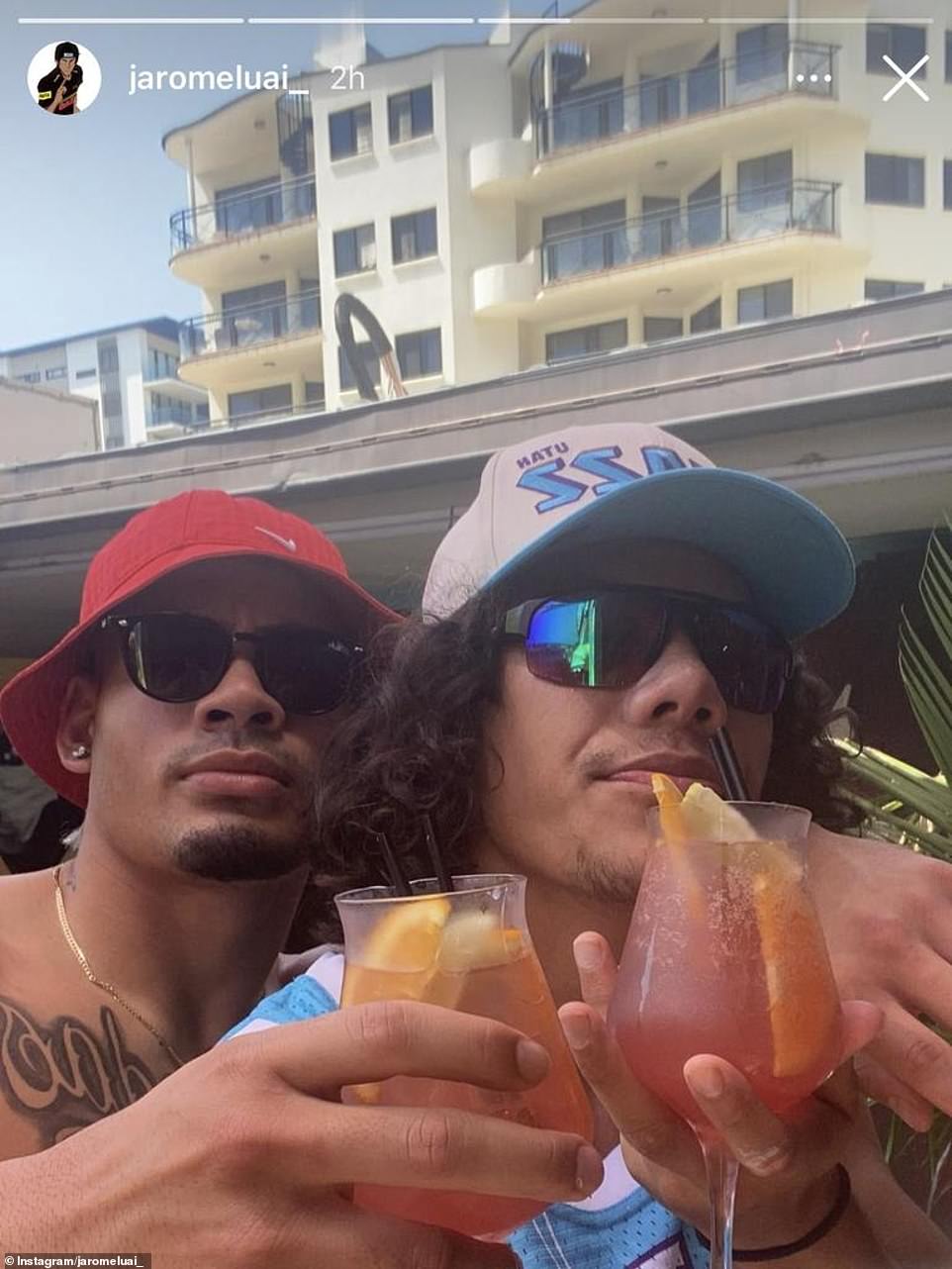 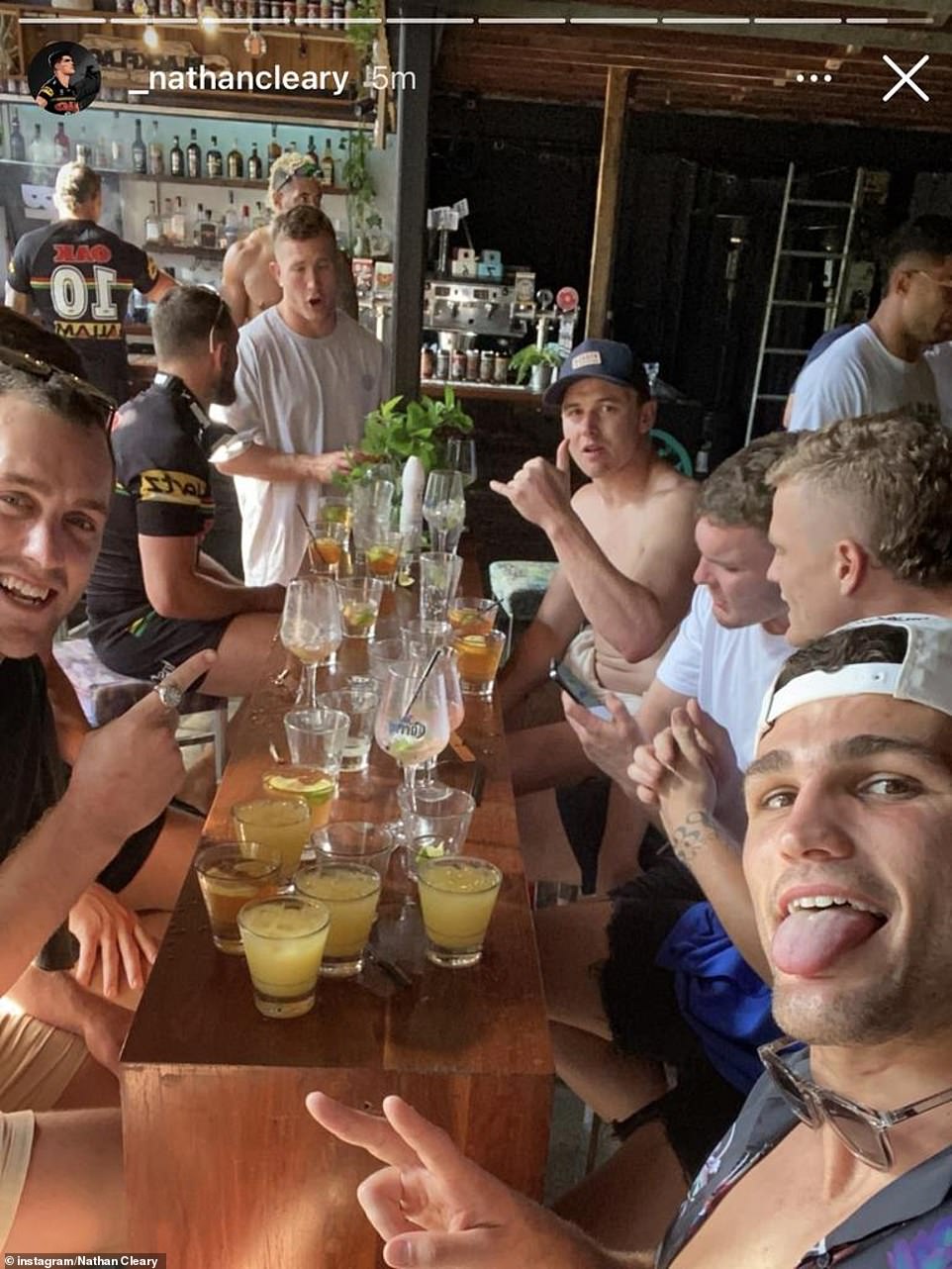 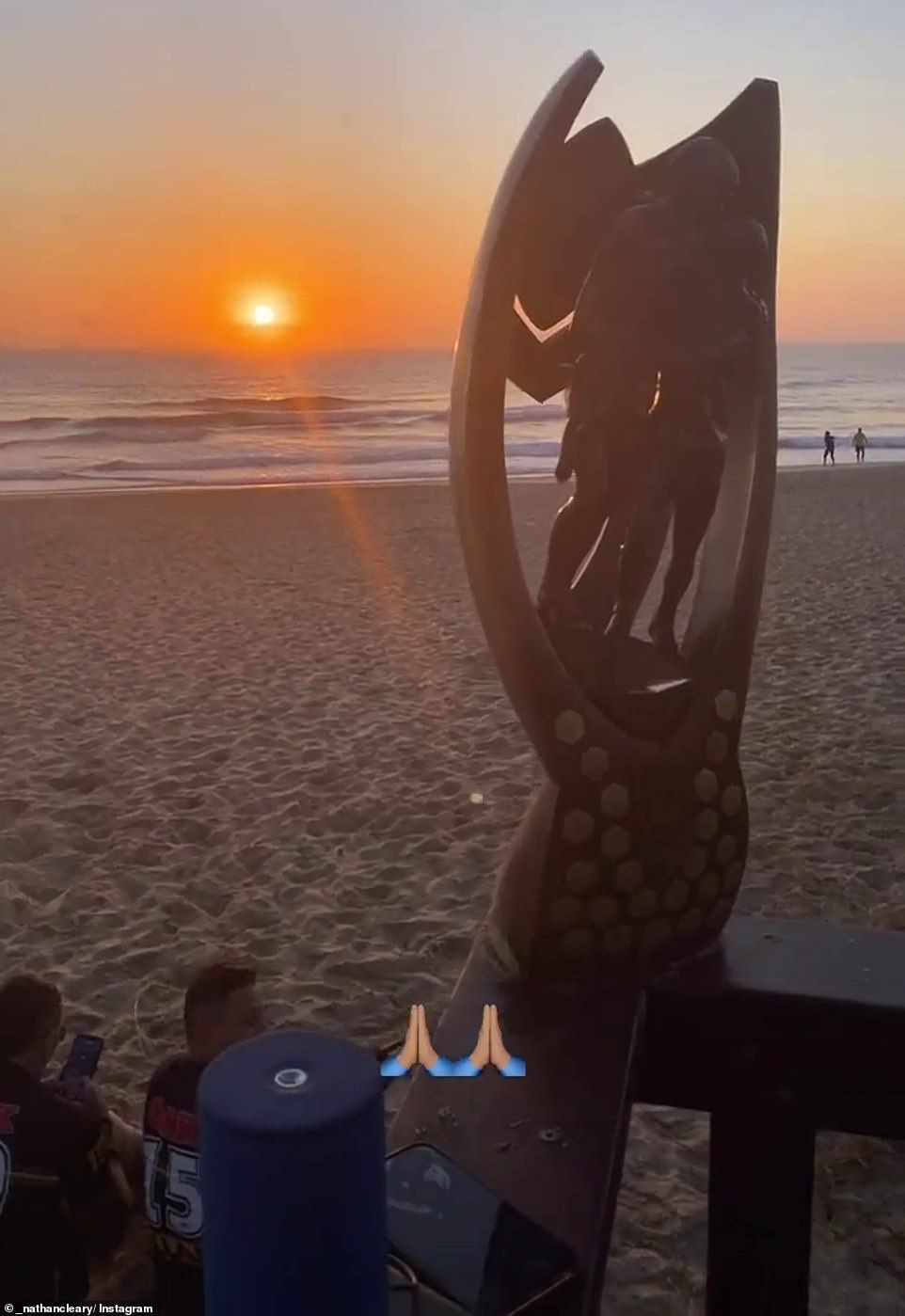 The Panthers took the distinctive Provan-Summons NRL trophy to the beach, the club’s first title since 2003 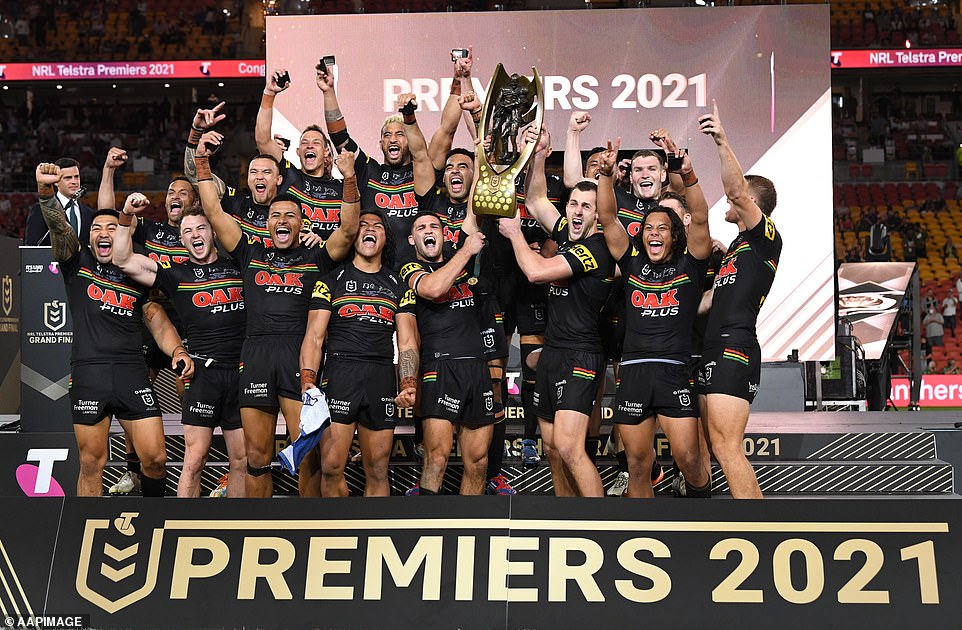