Pensioner, 68, on a walk during lockdown dies of suspected heart attack

A pensioner collapsed and died of a suspected heart attack during a lockdown walk when he got into a ‘minor fight’ with a motorist in a parked car and it ‘quickly escalated’, say onlookers.

Kenneth Hawker, 68, died after a ‘serious altercation’ with a stranger in the middle of a residential street in Great Yarmouth, Norfolk, police revealed.

Norfolk Police have confirmed no weapons were used in the scrap, which happened just after 12.30pm on Wednesday.

Kenneth Hawker (pictured), 68, died after a ‘serious altercation’ with a stranger in the middle of a residential street in Great Yarmouth, Norfolk, police revealed

A post mortem by a Home Office pathologist concluded Mr Hawker had died of an underlying heart condition.

Mr Hawker, who was married with children, lived in Great Yarmouth.

His family described the pensioner as a ‘popular’ man who was ‘much-loved’ by his friends.

His family said in a statement: ‘Kenneth, or Ken as he was known, was a much-loved husband, father, son and brother.

‘He had many friends, and was a popular member of the local community. His sudden and untimely death has come as a huge shock to us all.’

The driver, aged in his 50s, was arrested at the scene and quizzed by detectives before being released under investigation on Thursday evening.

Residents under lockdown rushed out of their homes, some in dressing gowns, when Mr Hawker collapsed. 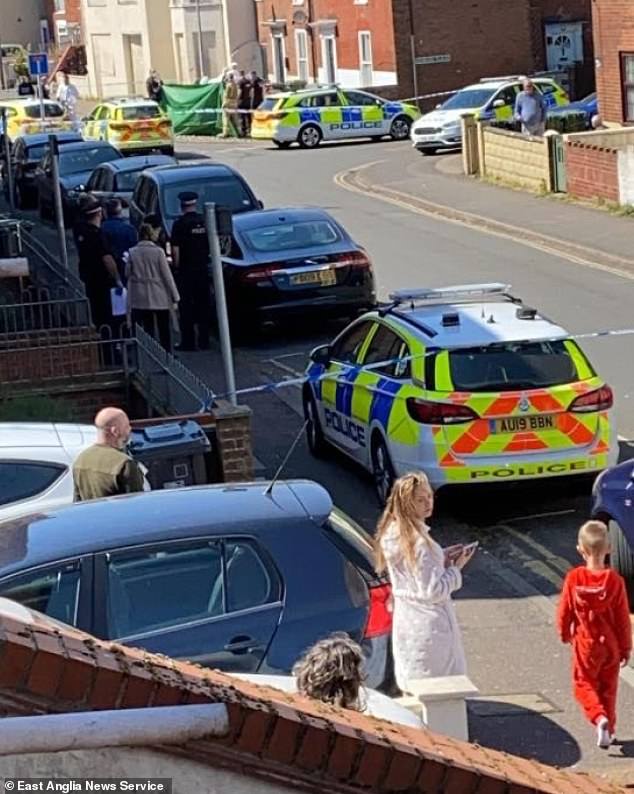 Residents under lockdown rushed out of their homes, some in dressing gowns, when Mr Hawker collapsed and police arrived (pictured)

One witness said: ‘It started as a minor fight on the road, but it escalated so quick’.

A local resident said he saw ‘police arrive in numbers’, and one officer performing CPR on Mr Hawker for up to 30 minutes.

He said: ‘After about 40-45 minutes, it became quite obvious what had happened.

‘The other guy was arrested right outside my window – he was in police cuffs and they had his phone in an evidence bag.’

The eyewitness added that ‘lots of people had gathered’ at the scene in response to the chaos.

He said: ‘With the lockdown, it’s the first thing that people have seen in weeks – they stood about for around an hour before everybody started to disappear.

Another resident described a ‘huge commotion’ with at least 15 police and emergency vehicles gathered in the road.

Detective Inspector Neil Stewart said: ‘We are working through various lines of enquiry to establish what has happened in the lead up to this man’s death. 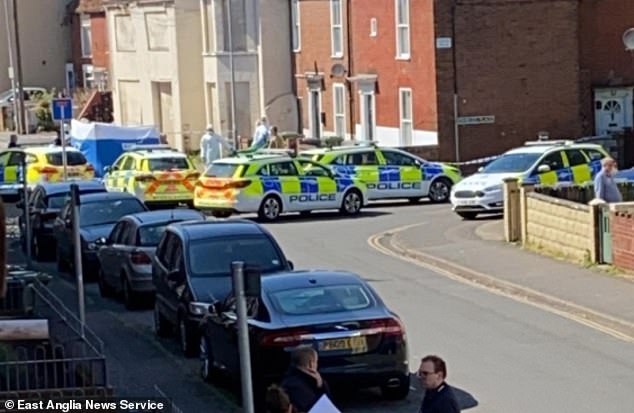 The driver, aged in his 50s, was arrested at the scene and quizzed by detectives before being released under investigation on Thursday evening

‘We know from initial reports a number of people witnessed the incident, and we would be keen to hear from anyone who hasn’t spoken to police already.’

A Norfolk Police statement revealed Mr Hawker, a pedestrian, got involved in a ‘confrontation’ with ‘a man in a parked car’ – but ‘it is not believed the men were known to each other’.

‘Police are investigating the death of a man in Great Yarmouth,’ it read.

‘Officers were called at 12:34pm on Wednesday to Middle Market Road, following reports of an altercation between two men.

‘Initial enquiries suggest the two men, a pedestrian and a man in a parked car, were involved in a disturbance on the street.

‘After the arrival of emergency services, one man, the pedestrian, was sadly pronounced dead at the scene.’

Anyone with information should contact the Joint Norfolk and Suffolk Major Investigation Team on 101, quoting reference ‘Operation Linbridge’.

Alternatively, they can contact Crimestoppers anonymously on 0800 555111 or online.