Pensioner, 72, shames Great Western Railway as he finds half of trains are either late or cancelled

A rail enthusiast has found that almost half of daily rail services passing through his local station are cancelled or delayed.

Tim Brown kept a diary of a week’s services scheduled to terminate or pass through Worcester Shrub Hill station.

The 72-year-old found 164 of the 379 scheduled Great Western Railway services were either cancelled or more than ten minutes late.

Mr Brown, who lost one of his legs in a car crash when he was 18, said GWR’s service was so unreliable he was nervous about using it.

Tim Brown, 72, found that 164 of the 379 scheduled Great Western Railway services were either cancelled or more than ten minutes late

He said: ‘To put it politely, the service is absolutely awful. I’m disabled and do not want to be stuck on a train late at night.’

On Sunday, March 11, Mr Brown recorded that 20 out of 35 trains on the North Cotswold line were delayed or cancelled.

Nineteen were cancelled or delayed on the Wednesday, 32 on Thursday, and 24 on Friday. On the Saturday, 13 of 49 trains were late or cancelled.

Retired bus driver Mr Brown became concerned about the reliability of services at the station after increasingly seeing delays when he visited for trainspotting.

GWR has struggled to train enough drivers to operate the faster intercity trains it introduced last summer. The North Cotswold line is the only direct link between Hereford and London Paddington.

The line was a victim of the Beeching cuts of the 1960s with some stretches reduced to a single track, creating pinch points where trains have to wait for services to pass in the opposite direction. But GWR has promised major improvements, increasing the number of services in the area and introducing a new fleet of faster intercity express trains last year.

Referring to the rail operator’s slogan – ‘more seats, more trains, more adventures’ – Mr Brown said: ‘If only this were true. I would like to sample the new trains but have yet to venture out for fear of being stranded a long way from my own bed somewhere on a truncated return working between Paddington and Worcester.’ 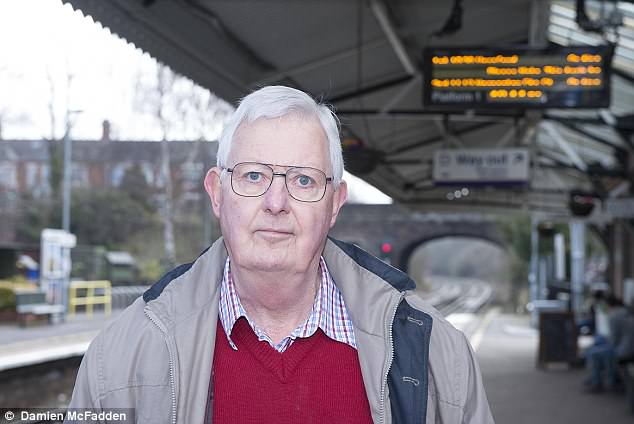 Mr Brown, who lost one of his legs in a car crash when he was 18, said GWR’s service was so unreliable he was nervous about using it

Transport Secretary Chris Grayling is already considering breaking up the franchise, operated by First Group, as part of plans to increase competition.

Great Western admitted recent performance had not been good enough and said it was doing all it could to improve the service.

A spokesman said: ‘We have had some issues with driver training – this, coupled with damage sustained by a small number of our remaining high-speed train fleet and some Network Rail infrastructure challenges, has meant that we have had to make some hard choices to deliver the best service we can.’

Millions of trees are at risk of being chopped down as Network Rail tries to stop problems with leaves on lines.

Drones will be used as ‘eyes in the sky’ to establish which trees are causing issues.

There are about 10million growing within 60m of track across 40,000 hectares of railway, although it is not known how many of these are at risk.

The Government-owned firm, which employs teams of staff to clear vegetation, claims the new approach allows it to be more selective when cutting down trees. Thousands of tons of leaves fall on to tracks every year.

They stick to damp rails and passing trains compress them into a slippery layer – known as leaf mulch – that reduces grip.

Green MP Caroline Lucas said: ‘Network Rail’s slash and burn approach really is an act of environmental vandalism. No one is saying no work is needed but this is just overkill.’