Pensioner, 78, ‘left with two lighters and flammable skin cream died when she set herself on fire’

A pensioner died when she set herself on fire at a care home partly owned by a major Tory party donor, a court heard.

Rosina McDonald, 78, had been left with two lighters and was being treated with a highly flammable skin cream at the Wood House Care Home in Laurel Close, Tooting, southwest London.

The care home was run by Gold Care Consultancy Ltd owned by Ravinder and Sukhvinder Gidar and the firm had breached fire safety regulations.

Ravinder Gidar has previously attended exclusive party events organised by David Cameron and Jeremy Hunt and donated £50,000 to the Tories in 2013.

Two years before the Tooting fire a blaze ripped through Burrows House in Penge on October 14 2013 a care home run by GCH Ltd, another company of which both brothers are directors.

Six residents had to be rescued after the fire destroyed the ground floor of the care home.

Two care workers at Wood House were doing their rounds when they heard screaming and crying coming from Mrs McDonald’s room on January 28, 2015.

Prosecutor Emma Collins said: ‘Upon opening the door they saw flames and black smoke went out into the corridor.

‘It was after that point that the fire alarm was activated in the hallway.’

The care workers saw that the old lady was on fire. 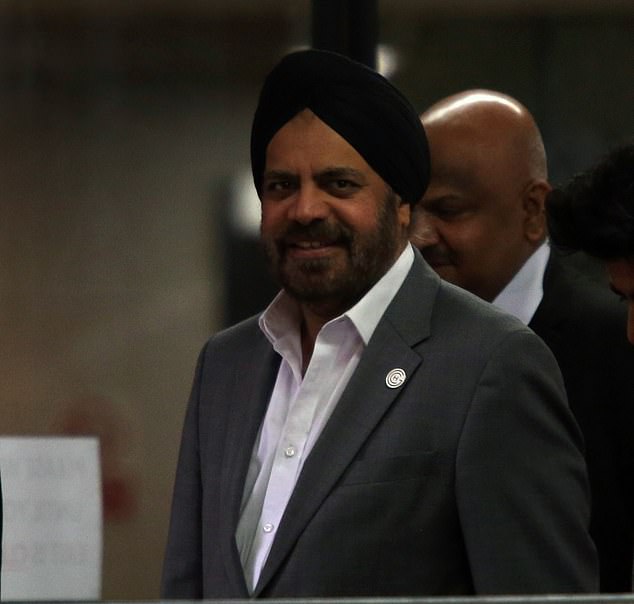 Ravinder Gidar has previously attended exclusive party events organised by David Cameron and Jeremy Hunt and donated £50,000 to the Tories in 2013

Ms Collins said: ‘She appeared disoriented and was moving around the room.

‘Because of the smoke the carers were unable to get into the room but they were able to beckon her out of it.’

One care worker took off her cardigan and used it to put out the elderly lady.

By the time the ambulance and fire brigade arrived Ms McDonald had sustained full or partial burns on 50 per cent of her body.

She died from her injuries the following day.

When firemen entered her room to fight the flames they found a lighter on top of her bed.

Ms McDonald was a smoker who was in possession of two lighters in her room as well as highly flammable paraffin ointment which she applied for a skin condition.

The lighter which was the source of the fire had been modified in a manner which made it even more dangerous.

Ms McDonald’s cigarettes were kept in a separate part of the building where she would go to collect them and smoke outside during the day and that it is not known what she was using the lighter for at the time of the fire.

Her nightwear had become soaked in the flammable ointment from previous applications.

Ravinder Gidar was interviewed under caution and told the police Gold Care Holdings Ltd had spent £400,000 improving fire precautions at their home since the blaze.

He explained that Gold Care now had a policy of no lighters being present on any residents since 2016.

‘He explained that the fire alarms were the responsibility of the landlords Meridian housing and he had written to them requesting that they be replaced and updated.’

The court heard that while the fire alarm in Ms McDonald’s room had recently been tested and found to be functioning it was not set off by the fire.

Paul Spencer, defending Gold Care Consultancy, said: ‘This was a truly tragic event and it is an event which should never have occurred.

‘Anybody reading the prosecution bundle can’t be anything other than touched by what occurred.’

He added: ‘Many moisturising creams for skin conditions are based on flammable components.

‘The Fire Brigade says that 15 people have died in fires caused by flammable skin creams.

‘Many of the providers involved in the prescription of these creams have overlooked this.

‘This is something the defendant really has had to review.’

Mr Spencer told the court that his clients would be paying any fine out of their own pocket and that the issue of companies being linked together was a ‘tricky’ one.

Sentencing was adjourned until May 3.