Pensioner, 82, is stunned to find reptile in her oven when she went to cook her chips

A pensioner got the fright of her life when she went to cook her chips and found a snake hiding inside her oven.

The 82-year-old slammed the door shut and immediately called the RSPCA when she noticed the critter lurking in her kitchen.

An inspector was dispatched to rescue the reptile, a non-venomous African brown house snake, which measured at least three feet long.

The pensioner, who doesn’t want to be identified, had opened the oven door to cook in her dinner when she spotted the snake.

She said: ‘When I opened the oven door and saw it I got the shock of my life.’

‘I have recently had a cataract operation and was wondering if my eyes were deceiving me – but my husband saw it too.

‘We are big animal lovers and just wanted to make sure the snake was safe so we were pleased it was rescued by the RSPCA.

‘I gave the inspector a big hug and a cup of tea afterwards, but I went off the idea of oven chips so sent my husband to the fish and chip shop instead.’

RSPCA inspector Andy Harris managed to hook the snake out of the couple’s oven and into a bag.

The rescue, which was caught on video, took place in Hazel Grove, Stockport, last Friday. 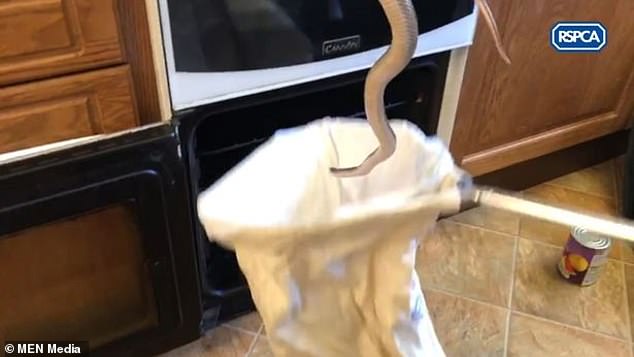 An RSPCA inspector was dispatched to rescue the reptile, a non-venomous African brown house snake, which measured at least three feet long

The snake, nicknamed Sammy, is now being cared for by a specialist reptile keeper.

The RSPCA said the species was often nervous and not prone to biting.

It’s believed Sammy may have slithered through a wall cavity and a gas jet hole into the oven.

Inspector Harris said: ‘When I arrived I expected to find a small corn snake but this snake was quite long – at least three foot.

‘It was an African brown house snake, which is a non-venomous species, so I suspect that he is a pet that has escaped or been abandoned.

‘It was probably attracted by the warmth but it was lucky the couple didn’t pre-heat the oven first.’