A 86-year-old man has been convicted under anti-stalking laws after he spent up to eleven years taking intrusive photographs of his next door neighbour in a bid to prove he owned part of her back garden.

Tameside magistrates court heard how  retired engineer David Nolan constantly took covert pictures of 62-year old cancer sufferer Catherine Holdich whenever she went outside – claiming she was ‘trespassing’ on land at the bottom of their adjoined properties.

Mrs Holdich made a statement against Nolan but died last year before the case could come to court.

The OAP also swore at Mrs Holdich in a series of confrontations and also threatened to kill her during the decade long boundary dispute at their terraced homes in Mossley, Greater Manchester.

The victim said her elderly neighbour’s behaviour would leave her with a ‘sinking feeling in her stomach’ everytime she ventured outside to walk her dogs or do household chores – for fear she would bump into him.

Police gave Nolan a warning about his bizarre conduct but he was later convicted of harassing Mrs Holdich between 2007 and 2017. This week the widower, who is partially sighted, was convicted of breaching a restraining order which had banned him from contacting the victim.

In her statement read to Tameside magistrates court, Mrs Holdich who lived with her husband Steven said: ‘Over a long period of time I have been targeted by our neighbour Mr Nolan. 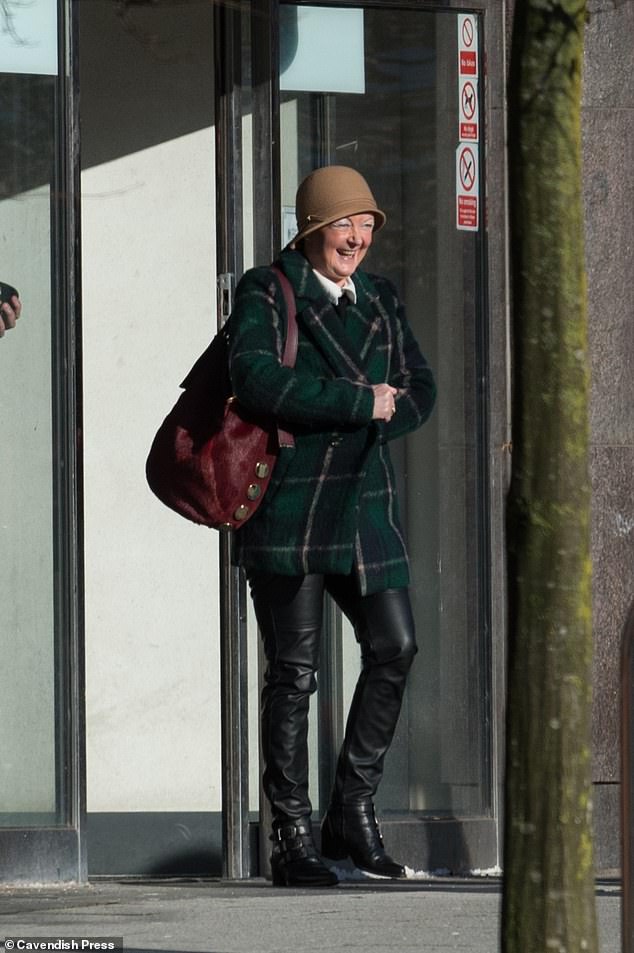 Catherine Holdich outside Tameside Magistrates at an earlier hearing. Mrs Holdich died last year before the case came to court

‘Over the years have had to put up with all sorts of abuse including Mr Nolan taking pictures of me. I live in a row of terrace houses ours being the end but for some reason Mr Nolan tried to claim the land at the rear of the houses which included land that Steven and I own.

‘He has targeted me but never it appears Steven. I was successful in gaining a court order to protect me from harassment and as a result I finally felt after years of being a victim I could now live in peace.

‘I underwent a double mastectomy and due to the procedure was hospitalised there for a week. But when I returned home then my husband made me aware he had had an incident with Mr Nolan and I felt upset and thought that the harassment was starting again.’

The court heard the campaign arose out a civil dispute Nolan was waging against Mrs Holdich over a strip of land which had ‘overlapped’ onto his property from her back garden. Whenever she went out for walks with her dogs, he would take photographs of her. It was claimed he was been verbally abusive towards Miss Holdich shouting and swearing at her and at one stage he did threaten to kill her. 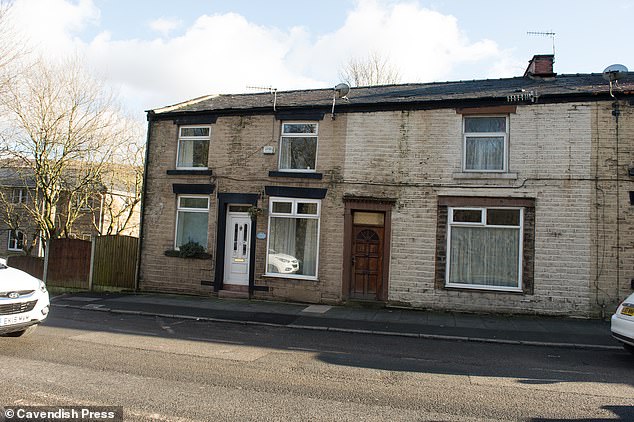 He was given a two year restraining order in January 2018 after being convicted of harassment but was questioned by police again after an incident the following April in which he was seen gesturing at her from a window.

Mrs Holdich’s statement added: ‘ We have two dogs and I love getting out and taking them for a walk. Due to the operation I felt cooped up and on this day felt fine and in the position to go for a small walk and it was a big event for me after the surgery and post op treatment.

‘As I returned I was feeling great and felt I was winning my battle and saw Steven at the fence. But at this point there was banging at the window and Mr Nolan at his rear window banging and ranting as he has over the years. He was waving piece of paper, making gestures that we should move. At that he stopped as it must have dawned on him that he had broken the order.

‘I was distraught, upset and reduced to tears he was starting his campaign against me. I have had to endure years of verbal abuse over the years and I cannot endure anymore threats. I get a sinking feeling in my stomach whenever I want to take the dogs out for a walk in the morning. It is one of my favourite times of the day going out for a walk and helps me a lot and it gets me down knowing that he is going to be there.

‘My life has been shaken up by the breast cancer and surgery and I feel I can’t go about my life and walking my dog. I’m begging the courts to help me, protect me from this man who’s venting his anger at me.’ 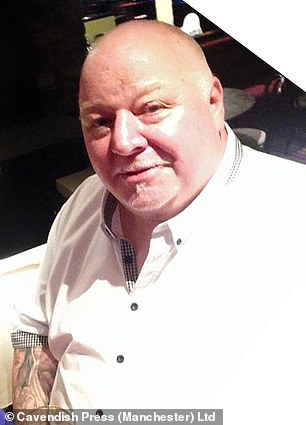 Steven Holdich husband of Catherine Holdich. ‘He has targeted me but never it appears Steven,’ Mrs Holdich said in a statement in reference to Mr Nolan

Mr Holdich who has lived next door to Nolan for almost 33 years told the hearing: ‘Cath had just come out of hospital after having a double mastectomy. She hadn’t been out properly and loved walking our dogs. She wanted to go out and walk the dogs just a little way round the back of the property.

‘I didn’t walk with her but went so far just to keep an eye on her outside the gate and watched her round the back. But I could see he was yelling at me from his lounge window. He was behind double glazing but I could tell by his demeanour, he was waving his hands, shouting and was making reference to a piece of paper in his hand. He was pointing at it and eventually gave me the two fingers.

‘Cath came up and joined me where I was stood, she looked up and said: ‘not again, here we go again.’ With everything else that was going on in our lives at the time it wasn’t something that we needed. It was really upsetting for both the wife and myself.’

Nolan who denied wrongdoing told the hearing: ‘They have never owned the land or property and I have documents to prove it. But the police inspector threatened to arrest me for taking photographs. I did insult him by telling him he wasn’t fit to wear the uniform but I felt I was being persecuted by the police. ‘

He said of the Holdichs: ‘They would make lots of noise at a time when my wife was dying of cancer. I had held a piece of paper up which was from Aviva, to say equity release had been taken out on a property I owned. I could hardly speak – never mind ranting and shouting. 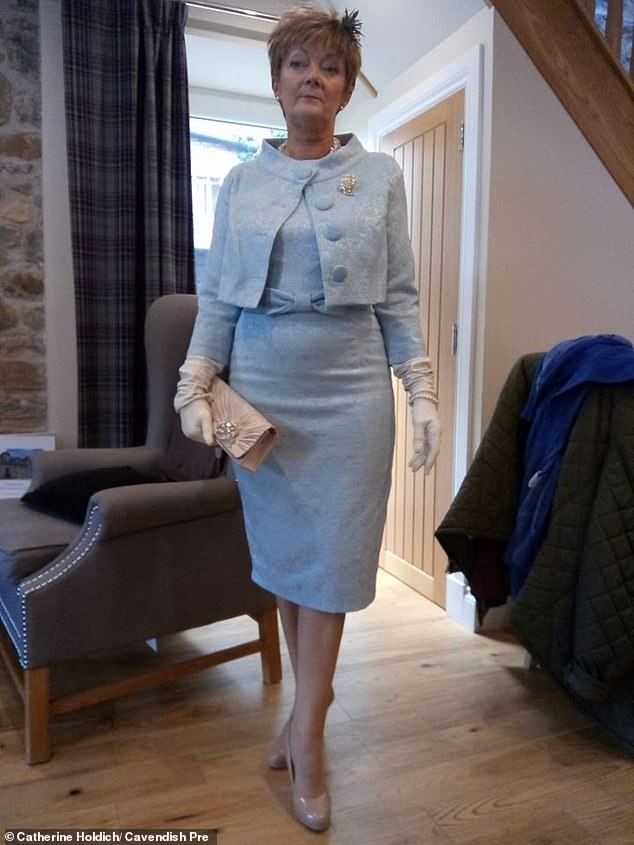 Nolan was conditionally discharged for 12 months and ordered to pay costs. (Catherine Holdich pictured above)

But convicting Nolan, chairman of the bench Richard Blackman told him: ‘This is a very sad state of affairs – a restraining order is a very important order that protects individuals from harassment or intimidation. This offence has not passed the custody threshold but it could have done. Quite frankly it shouldn’t be difficult to keep away from your neighbour and stay out of this dispute.’

He conditionally discharged Nolan for 12 months and ordered him costs and surcharges of £320. In response Nolan retorted: ‘You think I’m going to be alive in 12 months. It doesn’t matter what you do I am going to sue. I shouldn’t be punished.’

He added: ‘This is the first time I have ever been allowed to speak in court. I believe you have been very harsh on me. I’m going to sue regardless. The money is not important it’s a family that suffers, my family.’