A video shows the moment a Scottish holidaymaker was tipped out of her sunbed during a poolside row with pensioners.

Jenna Deacon and her friend Eilidh Robertson, 19, dared to take a sunbed that had been ‘reserved’ with a towel in the Portuguese resort of Albufeira.

The girls, from Forfar, Angus, shortly afterwards experienced the wrath of a mature couple, thought to be from the London area. 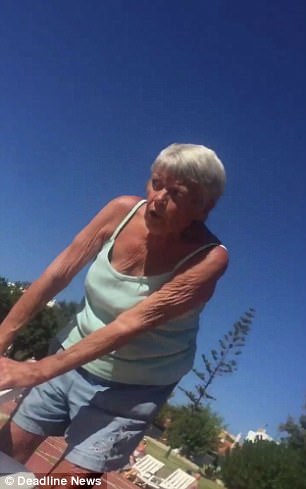 The girls, from Forfar, Angus, shortly afterwards experienced the wrath of a mature couple

The dispute ended with the man, holding an ice cream, lifting up one end of the sunbed, forcing Eilidh to slide off, exclaiming: ‘Put me down you f****** weirdo!’

Jenna’s clip, filmed earlier this month, begins with the Englishwoman speaking to Jenna and Eilidh – who is sitting on the chair – appearing to claim it is her sun lounger.

Eilidh can be heard arguing with the woman saying the bed has been ‘sitting there all morning’.

The annoyed tourist, seen wearing a vest and shorts, then calls over a man believed to be her husband, stating: ‘She’s taken my bed Paul’.

Stifling their laughter, Eilidh replies: ‘Leave me alone, I’m on my holidays.’

Standing with her hands on her hips, the Englishwoman then paces back on forth before saying something inaudible.

The Scot can then be heard replying: ‘Oh my God you can’t reserve a sun bed.’

Replying, the older woman argues: ‘Oh that’s funny, because you can.’

After further discussion, the man named Paul, seen holding an ice-cream returns and asks the Englishwoman: ‘Is that your bed?’ before coping Eilidh off it and dragging it away.

Jenna and Eilidh errupt with laughter as one of them is heard saying: ‘Oh my goodness, put me down you f***ing weirdo.’

Dragging the chair away, the older woman then shouts back: ‘Find your own.’

Speaking to a local newspaper, Jenna from Forfar said: ‘I went down to the pool at about 11 and there was one bed left.

‘Eilidh then came down later but there were two beds there that had towels on them but hadn’t been used all day.

‘It was about 3.40pm and this old woman came around with her arms on her hips. She started getting really aggy and I said to Eilidh that it must be her bed.

‘She started pointing a finger in our faces, I just had to whip my phone out. If she just asked us for the beds back we would have given them back to her. It was the fact she came round ready for a fight.

‘The reason she was getting so wound up was why we kept going.

‘I did think Eilidh would have eventually given it back to her – but I didn’t expect her husband to tip her off.’

So far the clip has been retweeted by nearly 2,000 social media viewers and liked by over 4,500.

Commenting on the clip viewers found the enouncter ‘hysterical’. @lblch7 wrote: ‘I am in hysterical tears’

@alxcoleman- commented: ‘I’ve actually watched this so many times and I’m still howling hahahaha ‘I’m on me ‘olidays”