Violent crime has soared to its highest level in a decade after a surge in drug feuds, domestic abuse and hate crime, statistics show.

Drug rivalries became increasingly violent in the first phase of the coronavirus pandemic in order to retain their turf.

Violence outside of venues also soared as lockdown restrictions loosened due to ‘pent up rage’, according to police.

It comes after it was revealed violent crime had returned to pre-Covid levels last month, amid fears that numbers could rise even further as lockdown measures are lifted.

Analysis of police data by The Times shows violent offences were at their highest level in nearly ten years across two thirds of forces in England and Wales in July.

Violent crime was higher last month than in July 2019 in 31 of 39 police forces who published their statistics.

Gloucestershire saw violent crime rise by 39 per cent while Durham had and increase of 35 per cent, the two highest rises in the country.

She said: ‘During lockdown perpetrators have increased their control and violence, and victims were unable to get away.’ 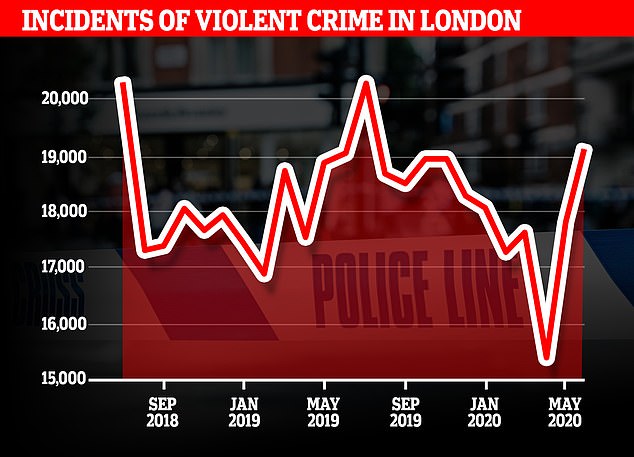 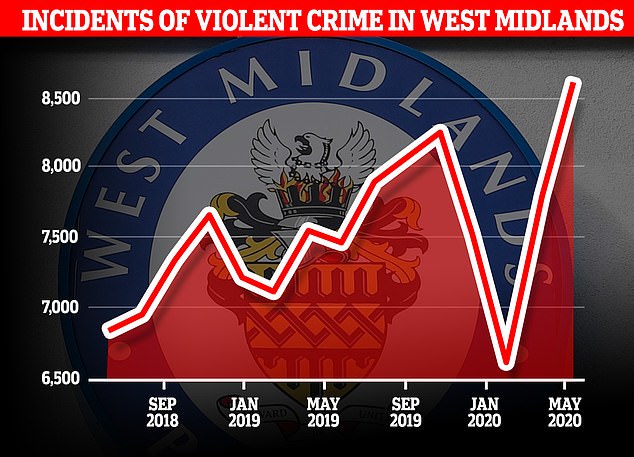 Violent crime monthly figures for June across the West Midlands – which includes Britain’s second-most populated city, Birmingham – was the highest seen in the last year

Violent crime rose by 27 per cent across the West Midlands this July since the same time last year, with 10,849 offences reported.

Mr Jamieson fears young people – who are not working – could get involved in criminal activity due to an abundance of time or missed schooling.

He said the surge in violent resulted from the ‘unlocking of a lot of pent-up frustrations’ built during lockdown.

Mr Jamieson added Covid-19 had disrupted the drugs market, resulting in a ‘sudden explosion of violence as the drugs gangs fight for territory’. 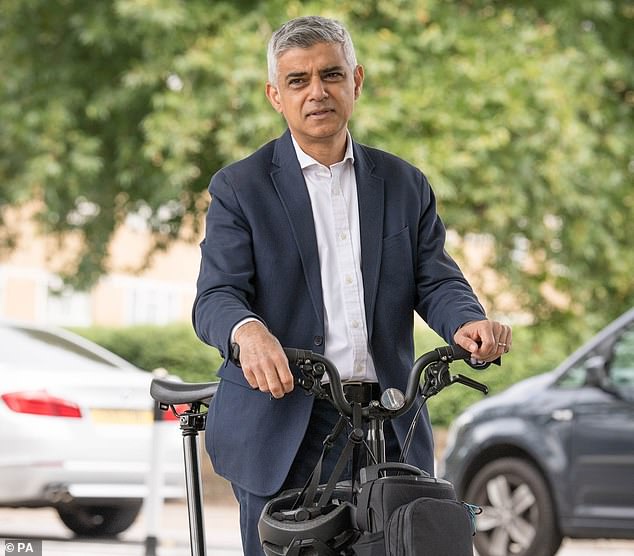 London Mayor Sadiq Khan said there is a ‘real risk of violent crime spiking as lockdown is eased’ in the capital after the pandemic sent crime rates plummeting by a quarter in England and Wales.

July saw 17 killings in the city – two more than July 2019. January this year saw 11 homicides in the capital, and February just seven.

Mr Khan told The Guardian that he is concerned that ‘the last decade of government austerity, where ministers decimated police and youth services – causing violent crime to rise in London and across the UK’ could be repeated all over again.

On Tuesday, a 20-year-old was knifed to death in broad daylight in Stockwell Road in south London at around 2.51pm.

The victim was found with a number of stab wounds and died at the scene despite paramedics’ best efforts.

Pastor Lorraine Jones, who lost her own son Dwayne Simpson to gun crime when he was also 20 in 2014, witnessed the distressing scenes.

She said in a video shared on Twitter: ‘I’ve just been holding a mother who just lost her son.

‘Why was this young boy stabbed? Why? What is the reason? There is so much that must be tied to it.’ 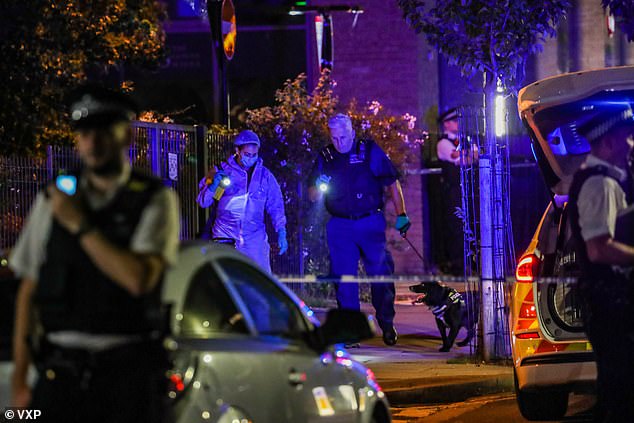 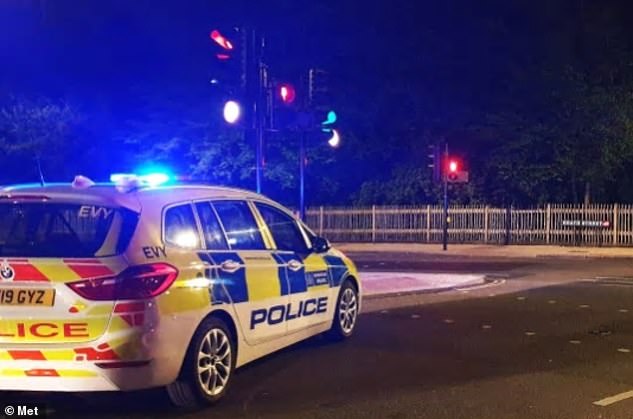 Met Police were called at 8pm to North Road, Islington, and found a young man suffering with stab injuries

Earlier on Monday, an 18-year-old was stabbed to death in north London after being chased and attacked.

He was treated at the scene by paramedics, but was later pronounced dead.

Police said Mr Nuur was chased and attacked in Goodinge Close, just off North Road, by two male suspects who then fled in the direction of York Way.

A witness told the Evening Standard she tried to save his life after a chase and fight lasting less than a minute.

She said: ‘I heard a ruckus then a cry of “help me help me”. There was a young man laying on the ground. I went out with other neighbours, he was still breathing.

‘We tried to comfort him. His friend was with him shouting ‘raise your hand if you can hear me’. He was not conscious.

‘I can’t get the image of the boy laying there. The neighbours did their best. It’s heartbreaking, our thoughts are with his family.’

His death was the fifth murder in London in as many days.