The U.S. Department of Defense said Thursday that it’s ready to spring into action if North Korea keeps shaking a barbed fist in the direction of Washington.

Pentagon joint staff director Gen. Kenneth McKenzie told reporters that American military forces in South Korea are in ‘a high state of vigilance,’ adding that the U.S. is always prepared to respond to provocations from Kim Jong-un’s dictatorship ‘because they have proven to be unpredictable in the past.’

President Donald Trump said in the morning, after calling off a planned June 12 nuclear disarmament summit with Kim, that he had received assurances of readiness from Defense Secretary James Mattis and the Joint Chiefs of Staff.

America’s fighting forces are ‘by far the most powerful anywhere the world,’ Trump said, and ‘more ready than we have ever been before’ to intervene in the decades-long Korean territorial standoff. 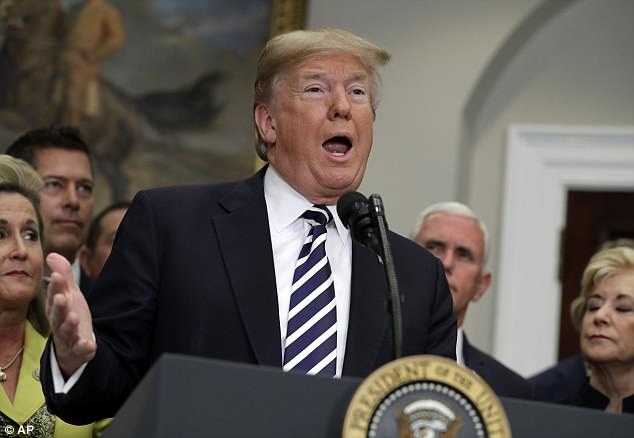 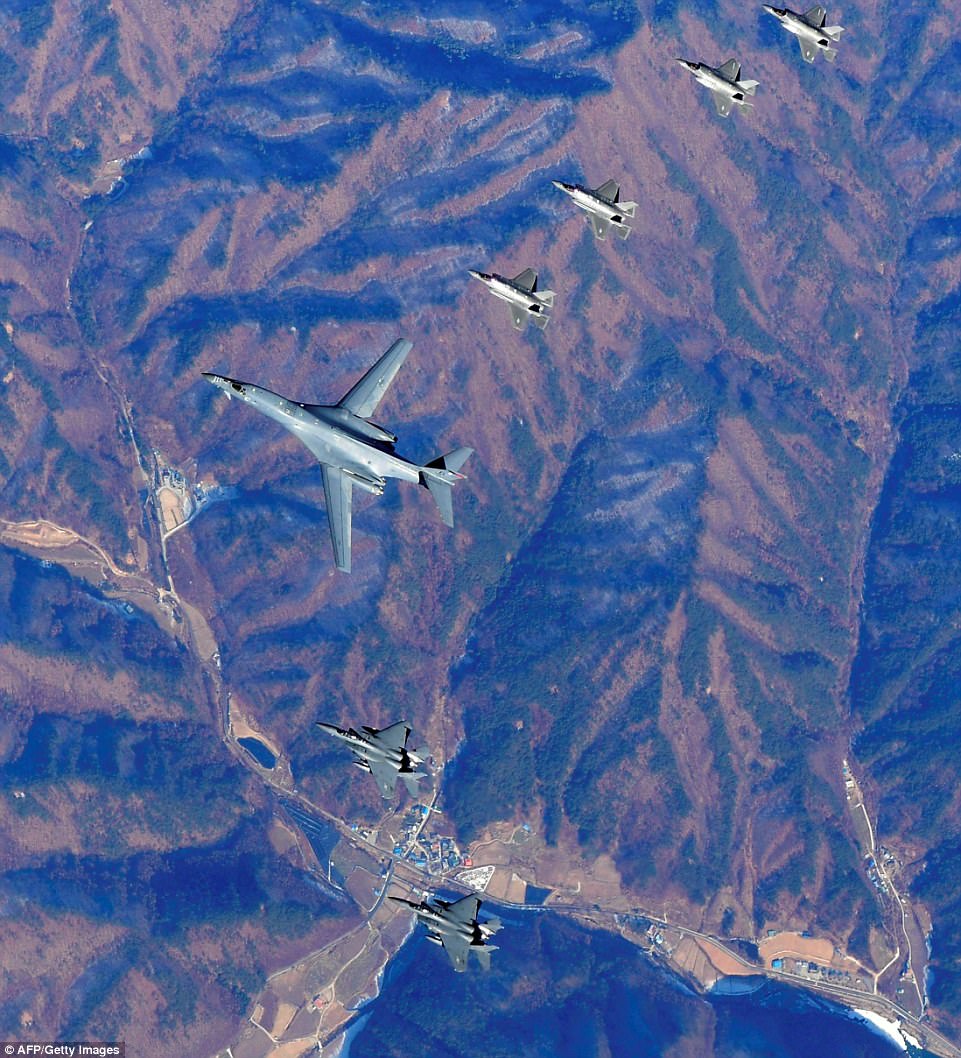 North Korea considers the U.S. ‘imperialist war mongers’ because of displays of American military might at close range like this training drills over South korea involving an Air Force B-1B Lancer bomber (center), along with US F-35A and US F-35B stealth jets 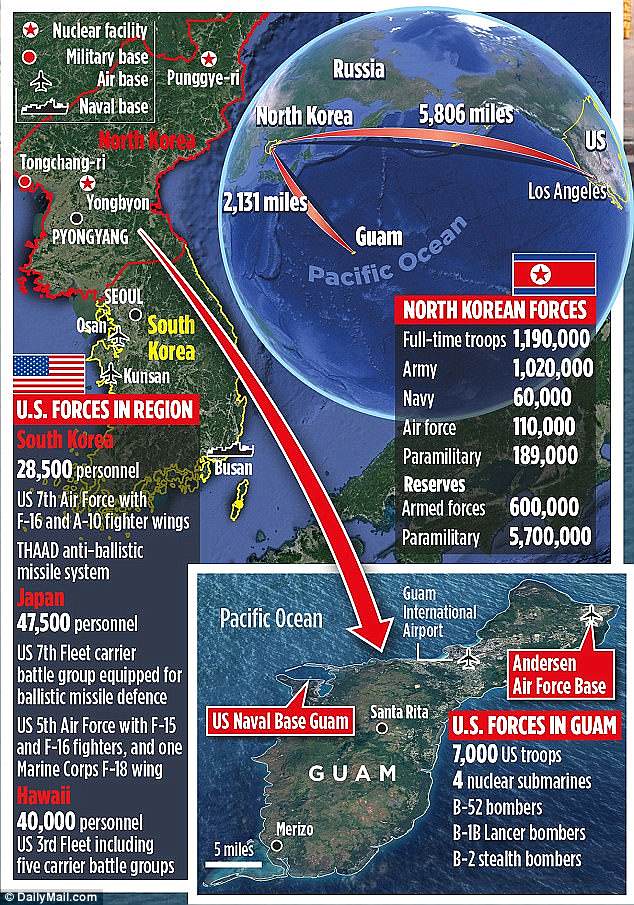 The president put North Korea on notice last year by threatening to rain hell down on the communist country if Kim didn’t stop threatening the American territory of Guam with rocket tests designed to signal future nuclear projectiles.

Trump warned that he would unleash ‘fire, fury and, frankly, power the likes of which this world has never seen before.’

He later allowed that those words might not have been ‘tough enough.’

‘Let’s see what [Kim] does with Guam,’ he said. ‘[If] he does something in Guam, it will be an event the likes of which nobody has seen before, what will happen in North Korea.’

On Thursday, McKenzie said the Pentagon is ‘in a boxer’s stance. We are ready to respond.’

‘We’ll see what develops over the next few days. If any provocative actions occur from there, we will certainly, in concert with our allies and partners in the region, be ready for it.’

‘We are ready to fight tonight. That’s always been the case,’ said White. 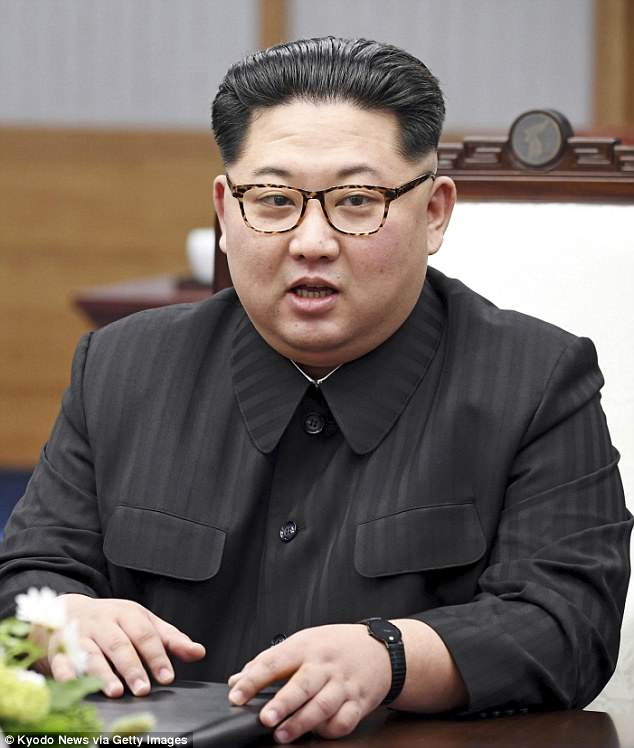 North Korean despot Kim Jong-un has met with U.S. Secretary of State Mike Pompeo and agreed on the contours of a nuclear summit with Trump, but those plans blew up Thursday 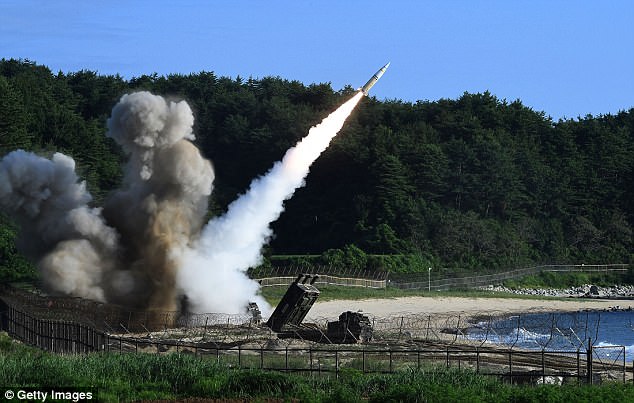 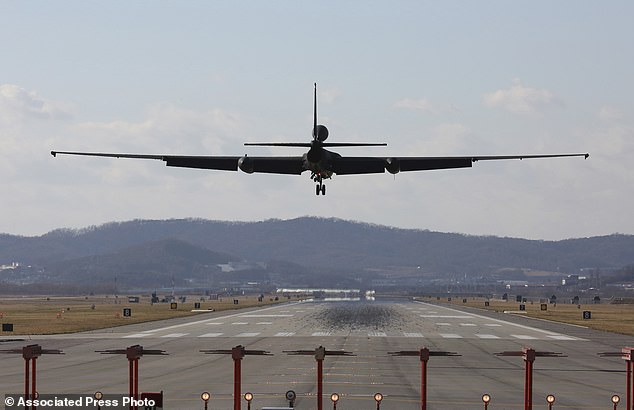 A U.S. Air Force U-2s spy plane prepares to land at the Osan U.S. Air Base in Pyeongtaek, South Korea 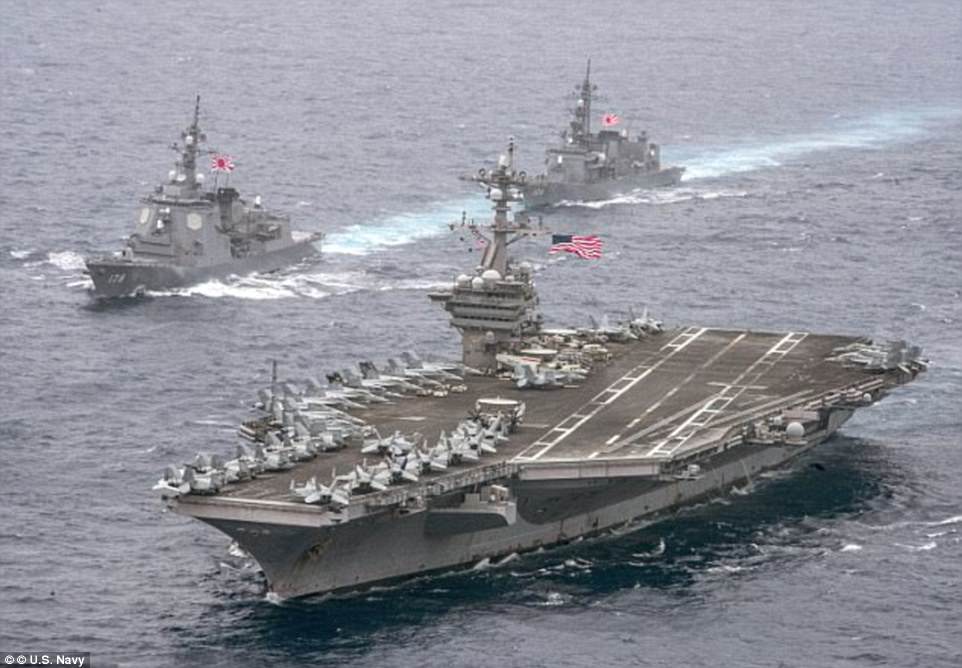 The U.S. has a mighty military force comprising 2 million personnel, 13,000 aircraft, 5,800 tanks and 400 naval vessels – but its presence near the Korean peninsula is far smaller; pictured is the USS Ronald Reagan aircraft carrier during drills in the Sea of Japan

The United States Forces Korea command comprises 37,500 military personnel in 85 locations, a buildup that’s an enduring legacy of peacekeeping efforts accompanying the end of hostilities there in 1953.

Trump’s military boast in Kim’s direction likely referred to activating much of that conventional force, which could quickly grow to include all 80,000 armed personnel serving across bases in Japan, South Korea and Guam.

Rear Adm. Michael Dumont, vice chair of the Joint Chiefs of Staff, wrote to lawmakers last year that ‘[t]he only way to “locate and destroy – with complete certainty – all components of North Korea’s nuclear weapons programs” is through a ground invasion.’

United States Forces Korea boasts around 100 planes including 70 F-16s and ten A-10 anti-tank jets, along with reconnaissance aircraft and other spy planes.

The U.S. has about 250 planes overall in the north Pacific, most of which are stationed with the Seventh Fleet in Japan. That’s where the nuclear-powered USS Ronald Reagan aircraft carrier is deployed. 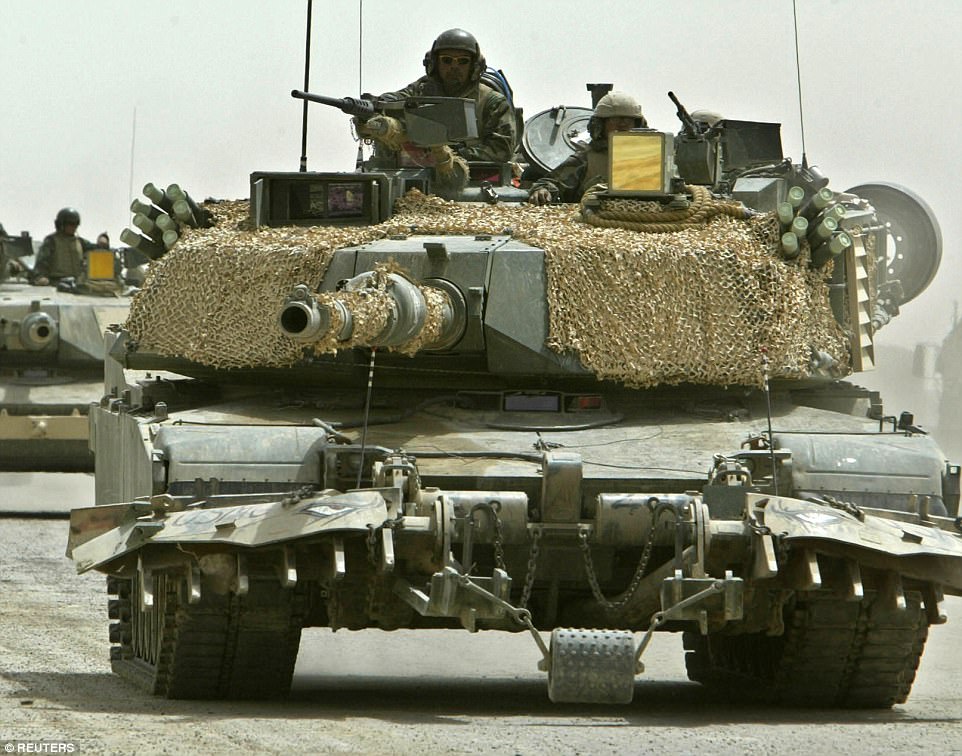 The U.S. has only about 140 M1 Abrams tanks like this one stationed in the South Korean city of Paju near the border with the North 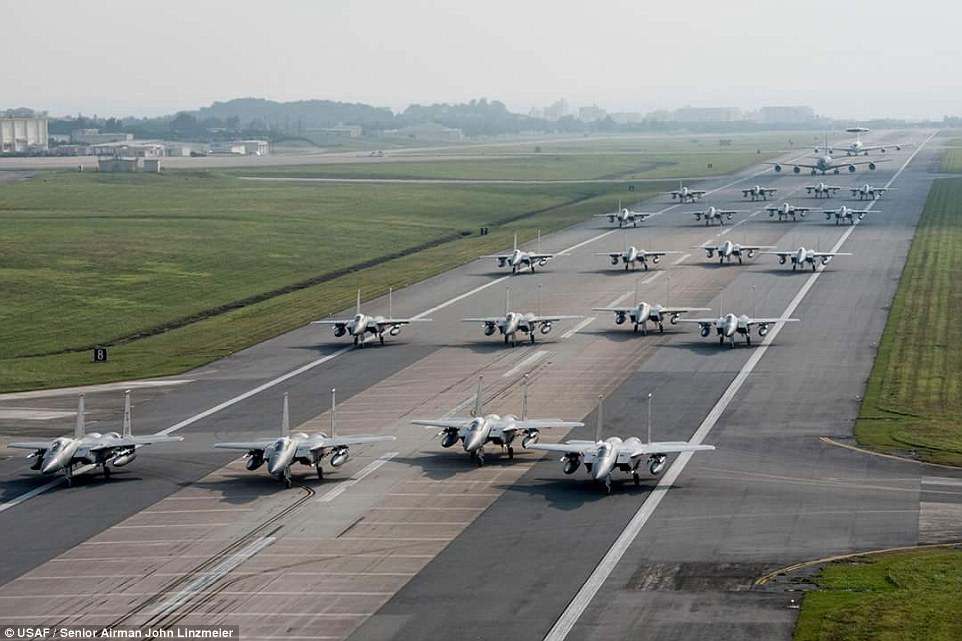 At any one time, as many as a dozen nuclear-powered submarines can also be deployed there.

Andersen Air Force Base in Guam is also home base to B1 bombers and a standing force of fighter jets.

But Kim has more than 1 million active soldiers, more than 1,000 planes and helicopters, at least 5,000 tanks, 111 fighting ships and 76 submarines at his disposal.

So Trump’s playbook would have to include a bigger threat – like the use of one of the 6,800 nuclear warheads under his command.

The prospect of Kim asembling just one has been enough to provoke the world’s latest high-stakes standoff across the space of more than 6,800 miles.