The US military has no idea how many Americans are still on the ground in Afghanistan after the Taliban took over the war-torn country, according to a stunning admission from Pentagon spokesman John Kirby on Thursday.

The federal government initiated a hasty evacuation effort Sunday when the Taliban reached Kabul after a fast and brutal offensive that mostly spanned over a week. US troops were already almost finished withdrawing from the country by President Biden’s August 31st deadline.

‘I don’t know,’ Kirby told a reporter who plainly asked for the number of US citizens still there now.

He was asked again if the Pentagon had ‘some kind of account of how many Americans are whether in harm’s way or need to be evacuated.’

Kirby referred the State Department as ‘a better place to go’ for the ‘best estimate’ of how many Americans are still trapped.

‘That’s not a figure that the United States military would know,’ he said.

Afghan people sit inside a US military aircraft to leave Afghanistan, at the military airport in Kabul on August 19th. The Pentagon says it doesn’t know how many American citizens are still in Afghanistan or in and around Kabul 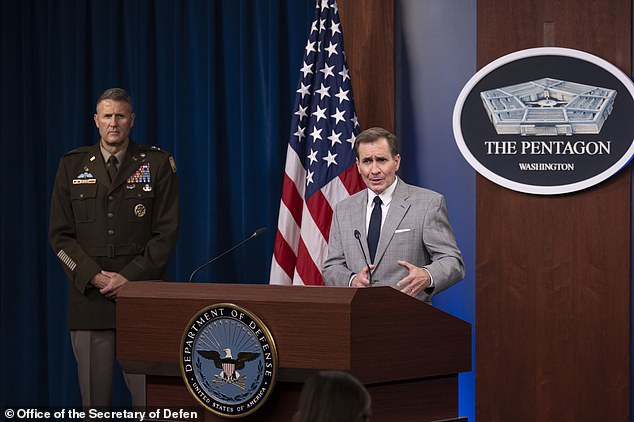 ‘And I think as you also know, not every American citizen in another country – there’s no obligation that they register their presence and that you can have a perfectly accurate count.’

He also declined to comment on any credible threats facing US troops if they don’t withdraw by a certain time.

A dozen US Air Force C-17 cargo jets removed 2,000 people from the region overnight – an average of just 160 people per flight, despite the planes being able to carry 600 people – six fewer aircraft than in the previous 24 hours. Since August 14, the US has only removed 7,000 people in total from the region.

They’d promised to lift between 5,000 and 9,000 out per day and there are at least 50,000 waiting to be taken to safety but people are not being processed quickly enough because of manic crowds at the airport’s gates and on the roads, which are being blocked by the Taliban. 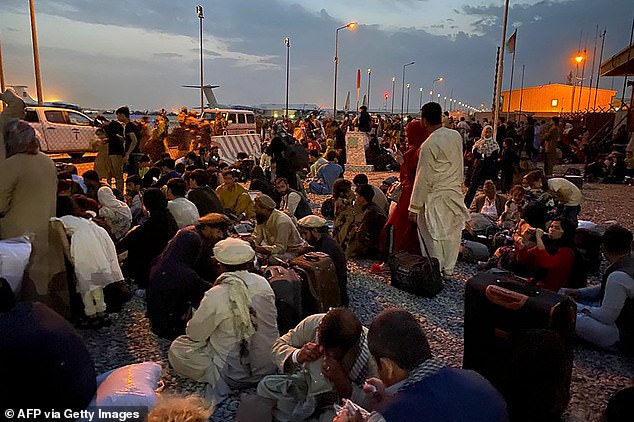 Afghan people wait to board a US military evacuation flight. The US promised to lift between 5,000 and 9,000 out per day – but have only pulled out 7,000 since August 14th

Despite reports out of Kabul that the Taliban is blocking entrance and forcing the US military into negotiations over who can get into the airport, Kirby said Thursday that there have been ‘no hostile interactions’ between the insurgents and Americans trying to get to Hamid Karzai International Airport.

‘We haven’t seen them impede or harass or obstruct the movement of American citizens from the environs into the airport. And obviously we want to see that continue,’ Kirby said.

The Taliban told foreign governments that they will let through all Westerners and civilians who want to board flights.

On Wednesday, ABC journalists were among those who were blocked from getting to the airport by two armed Taliban fighters who questioned their credentials then forced them back into their vehicles. It was caught on camera and aired on Good Morning America on Thursday. 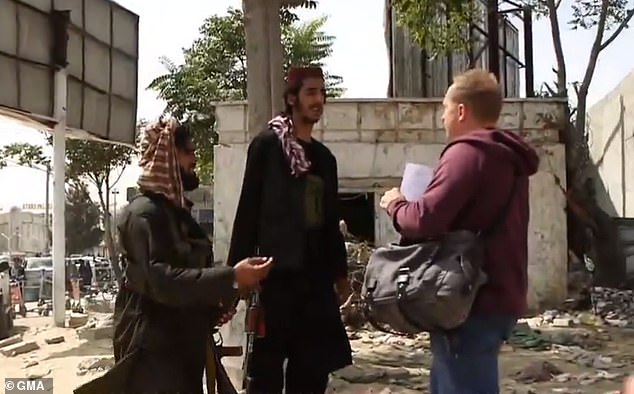 ABC journalists were blocked from even getting to the airport on Thursday despite having paperwork proving who they were. The Taliban’s leaders say they are letting people through but the fighters on the ground aren’t following the orders strictly and are blocking many of those trying to gain access 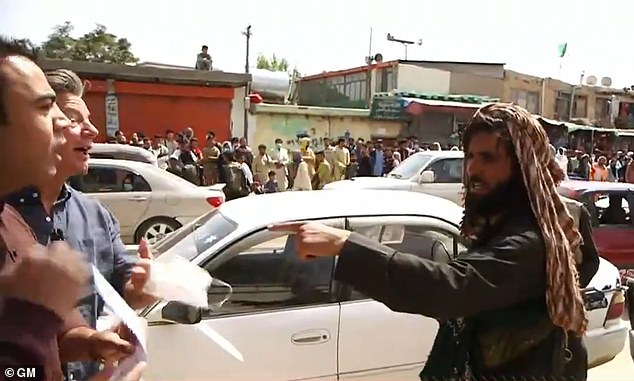 The ABC team tried to reason with the Taliban fighters, saying they had permission to get to the airport, but the fighters became increasingly agitated

Paul ‘Pen’ Farthing, a former Marine who now lives in Kabul with his wife, described the scene as a ‘clusterf***’, telling DailyMail.com: ‘Two ex-pats – one British and one Norwegian – have already been forced to turn back this morning because they can’t get through.

‘And last night a UN convoy carrying various foreign nationals, who had been working in Afghanistan for NGOs, had to turn round because of the sheer volume of people on the street.’

An Afghan-Australian trying to leave the country also told the ABC that it is ‘not possible’ to get to the airport today because there is ‘lots of firing’ and ‘too many people’ while Max Sangeen, a Canadian interpreter, said his wife and children – including a 20-day-old baby – are trapped in Kabul despite having proper documents.

It is not clear what, if anything, western troops can do to help.

The New York Times has been able to get 28 of its journalists and their families out and a CBS reporter was able to get out on Tuesday on a plane with Afghan refugees.

Between Tuesday and Wednesday, US forces only removed 2,000 people on 18 jets that could have taken 10,000. 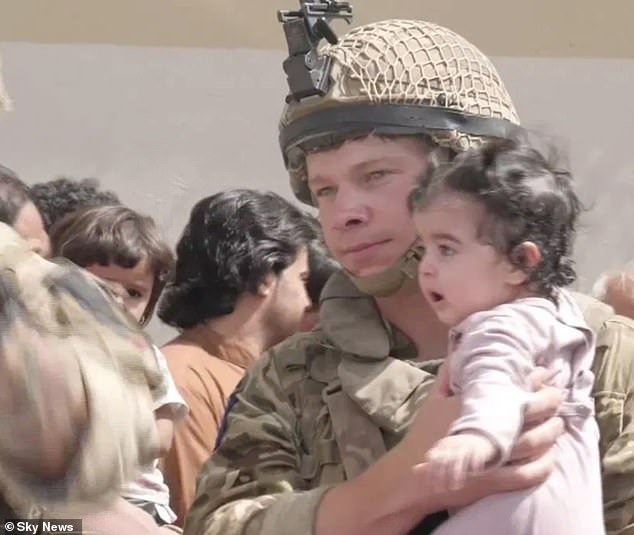 A British soldier carries an Afghan girl away from crowds at the gate, as Defence Secretary Ben Wallace today urged people not to pass their children to troops because they will not get a seat on flights out

Afghan mothers who can’t get through handed their babies over the wall to Western soldiers to be put on flights without them on Thursday. American troops have been seen helping some women over the barbed wire, while shouting at others to stand back.

Without paperwork like Special Immigrant Visas, few Afghans are being let through and they are now blocking the way for those who do have the right paperwork – like Western expatriates or Afghan allies – who are at risk of being killed by the Taliban if they aren’t removed soon.

Some on the ground called it a ‘lottery’ and described people with paperwork getting through but being turned away, while others without any ticket out are making their way onto planes through luck and force.

‘The US military footprint in Kabul is we have 5,200 troops on the ground. Kabul airport remains secure and open.

‘There are multiple gates that are now open and have entry which will help expedite processing,’ Army Major. Gen. Hank Taylor said at the briefing on Thursday morning.