People are LINING UP to hit the beach in New Jersey

Long lines formed outside New Jersey beaches on Friday morning as they reopened for the first time since coronavirus shelter-in-place orders began.

Beach-goers eager to start off their Memorial Day weekend flooded to Long Branch, Seabright and Ocean Grove beaches where there were seen waiting on deckchairs and sitting apart from other groups.

Beaches opened along the Jersey Shore just in time for the long holiday weekend but with social distancing mandatory.

Locals claim they are staying away, however, fearing that visitors from global epicenter New York City could bring the virus with them.

It comes as medical experts warn that the virus won’t take a break for the Memorial Day holiday, the traditional start of the summer in the U.S.

People queue to go to the Long Branch beach Friday on the first day that New Jersey beaches were reopened ahead of the Memorial Day weekend. Social distancing remains mandatory and admission numbers on the sand are limited 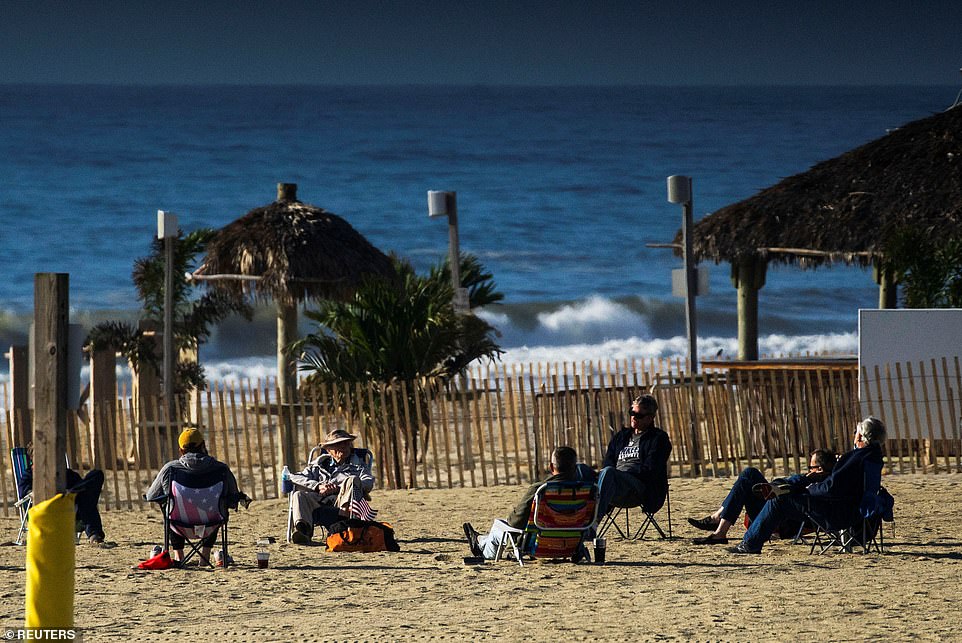 A group of beach-goers sit apart on Seabright beach in New Jersey on Friday as the state’s beaches reopened. Locals have said they are staying away, however, fearing that visitors from global epicenter New York City could bring the virus with them 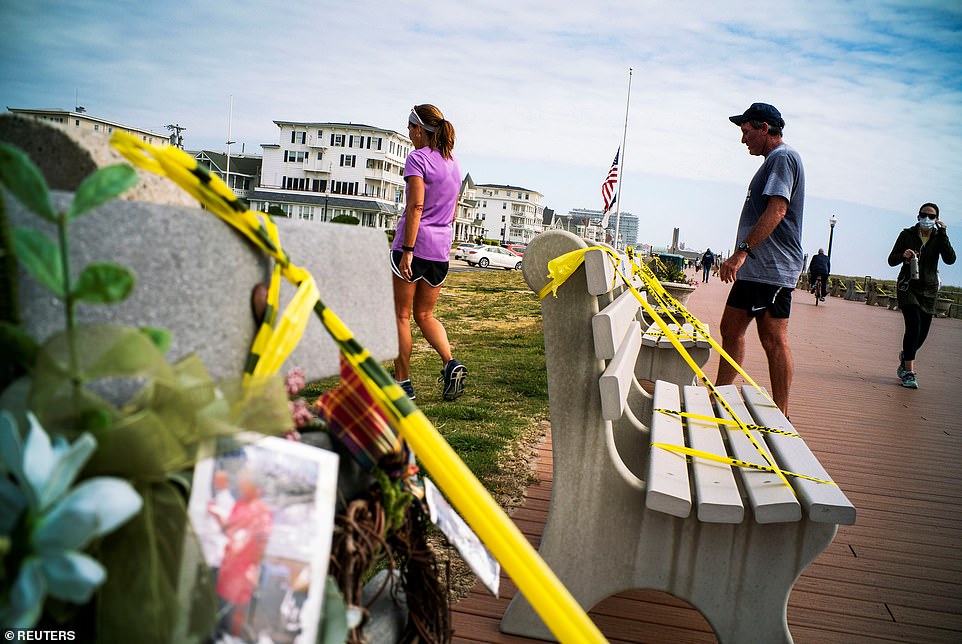 Beaches in New Jersey reopened for the first time Friday since the start of the coronavirus shutdowns in March but restrictions are in place. Pictured tape covers benches along the boardwalk to prevent visitors from using them 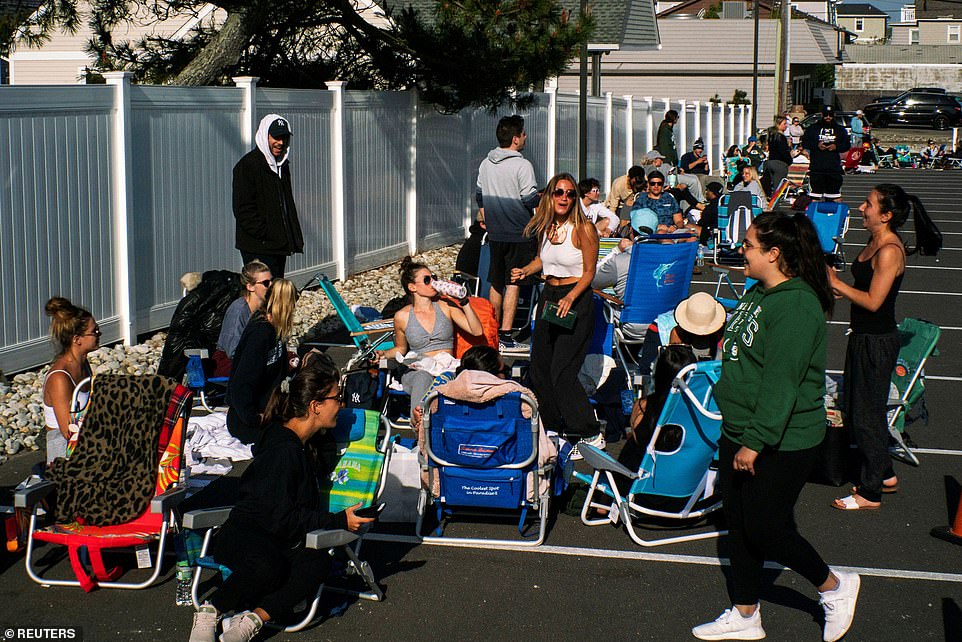 Groups waited at Long Branch Beach on Friday, pictured, to get onto the newly reopened New Jersey beaches. On Long Branch, patrons must wear face coverings when entering and leaving the beach and no groups larger than ten are allowed

While New Jersey Governor Phil Murphy issued an executive order on Thursday opening back up the beaches from May 22, limitations have been put in place.

The state had one of the longest and strictest shutdowns because it had the second highest number of cases in the country.

There will be no fireworks, Ferris wheel rides, roller coasters, go-karts or boardwalk arcade games.

Per new state guidelines, beach goers will have to adhere to admission limitations, practice social distancing, a ban on ‘special events’ and certain areas, like playgrounds and rides, remain closed.

Groups pictured lining up on Friday morning, many not wearing masks, sat separated from each other as they waited.

Even on the sand, some people in groups apart and benches along boardwalks were covered in tape to prevent people from sitting down,

Some beaches have elected to keep bathroom and shower stations closed to ensure the health and safety of beachgoers, according to NJ.com, while Cape May County is looking for volunteers to ensure that social distancing is maintained.

On Long Branch, patrons must wear face coverings when entering and leaving the beach and no groups larger than ten are allowed.

Once the beach hits its capacity limit, groups will be directed go to the next beach.

Other beaches such as Ocean Grove are limiting the number of beach badges sold each day to keep numbers on the sand down. 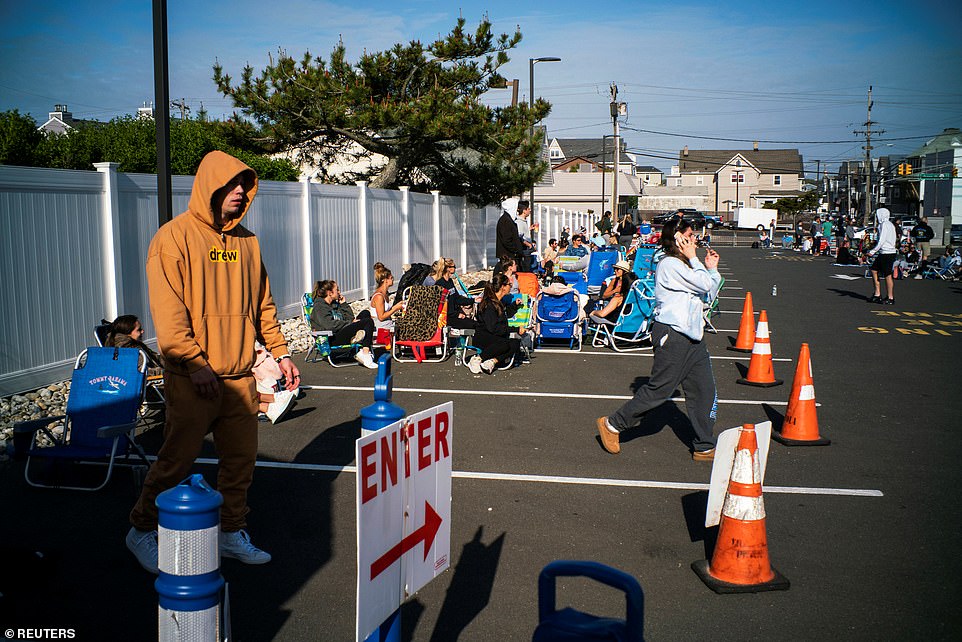 Groups waiting at Long Branch beach in New Jersey sat apart in an attempt to maintain social distancing. Lines quickly formed outside the beaches on Friday as they opened up ahead of the Memorial Day holiday weekend 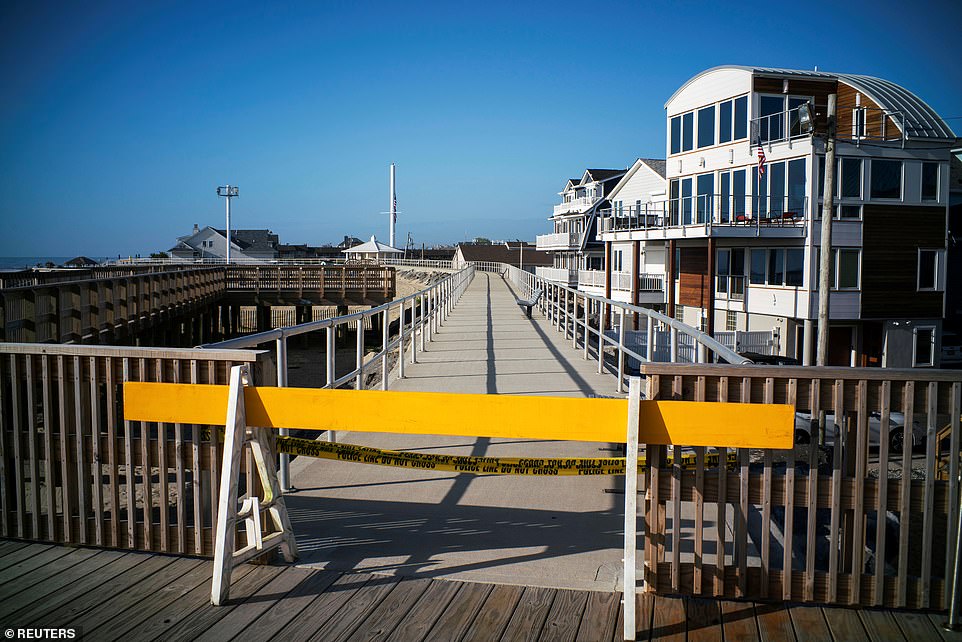 Pictured, the boardwalk of Seabright beach remains closed before opening on the first day that New Jersey beaches ahead of the Memorial Day weekend. Certain areas of the beach area such as boardwalks remain closed off to visitors 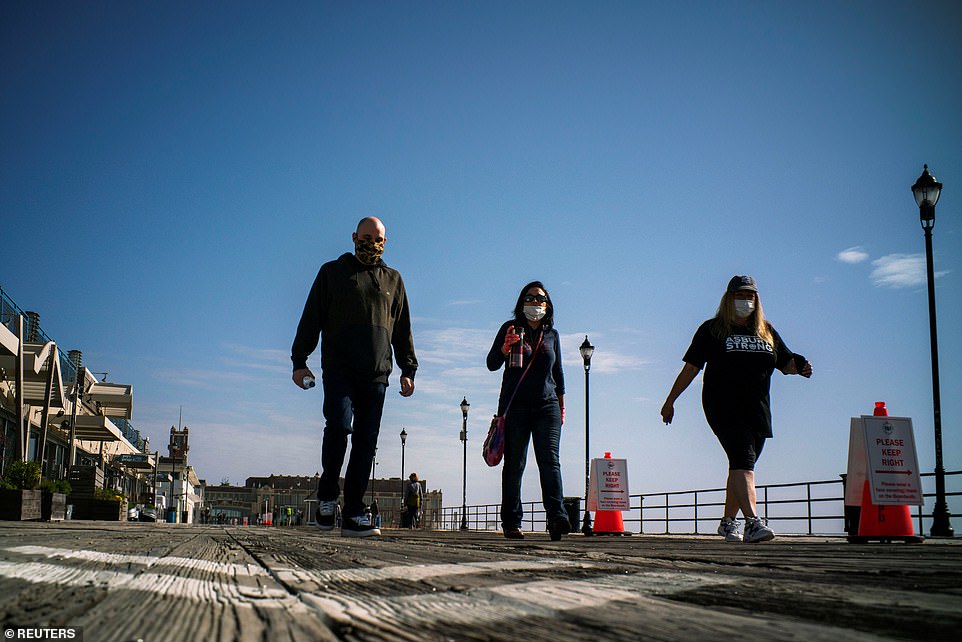 People walk the boardwalk of Asbury Park beach on the first day that New Jersey beaches were reopened on Friday. While New Jersey Governor Phil Murphy issued an executive order on Thursday opening back up the beaches from May 22, limitations have been put in place such as continued social distancing and requirements to wear a face mask

‘I’m leaving it to local officials on how to best implement these measures. Each shore town has its unique characteristics,’ said Gov. Murphy.

‘A trip to the beach is a treasured pastime for New Jerseyans on Memorial Day weekend just as it is for residents in our neighboring states,’ he added.

‘By aligning our social distancing policies for beaches, we can bring some semblance of a “new normal” to our region ahead of the first weekend of the summer season.’

Some locals plan to sit this summer out, however, fearful that visitors from harder-hit areas such as New York City might bring the virus with them.

New York state, Connecticut and New Jersey coordinated to reopen beaches from May 22 to prevent a massive influx of visitors if one opened before the other, but NYC beaches were initially to remain closed.

Mayor Bill de Blasio eventually allowed the city’s beaches to open this weekend but has mandated that people were not allowed to swim at them, only walk.

He added that they may be fenced off if crowds begin to get out of hand or people start entering the water. 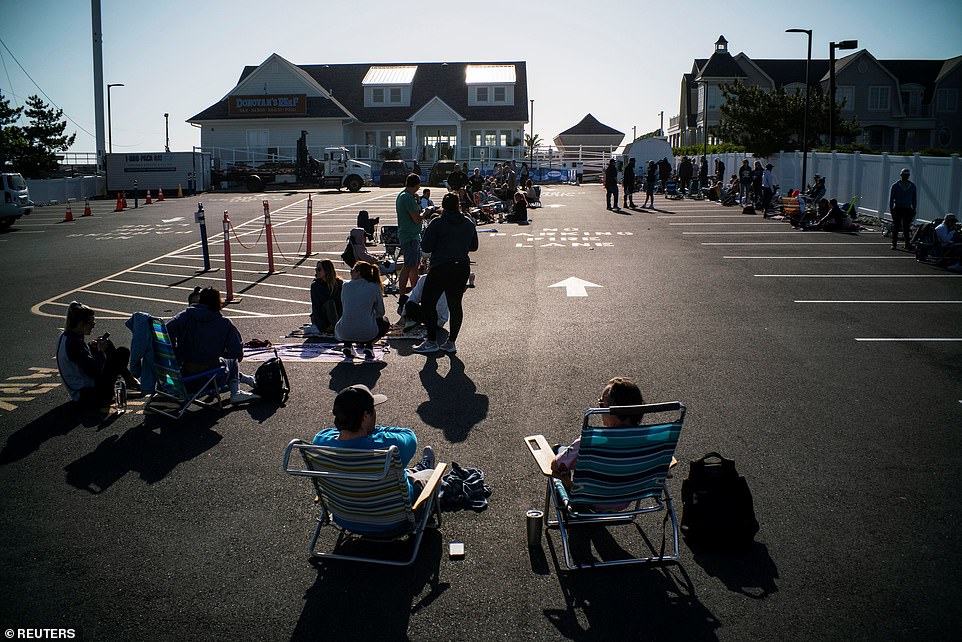 Seabright Beach in New Jersey also welcomed lines of people waiting to get onto the reopened beach on Friday. Per new state guidelines, beach goers will have to adhere to admission limitations, practice social distancing, and a ban on ‘special events’ 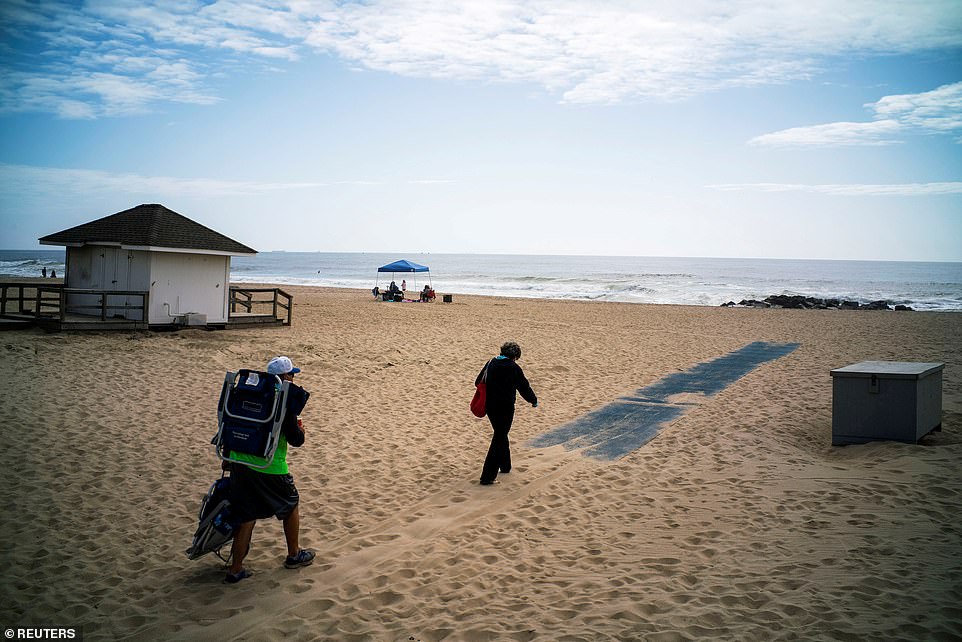 People arrive to enjoy the day at Ocean Grove beach in New Jersey. New York state, Connecticut and New Jersey coordinated to reopen beaches from  Friday, May 22, to prevent a massive influx of visitors to beaches if one opened before the other 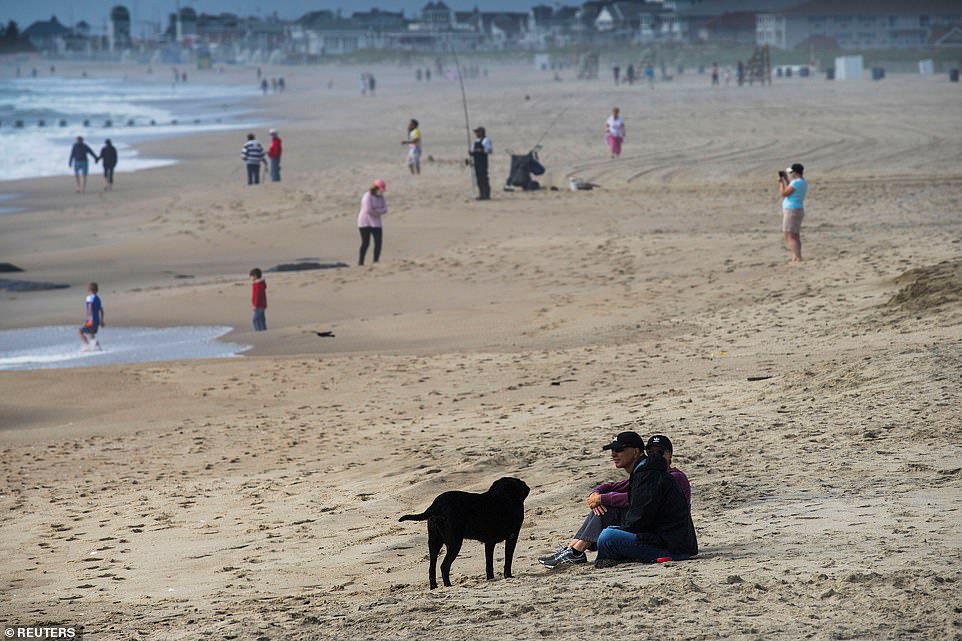 Ocean Grove beach, pictured, limiting the number of beach badges sold each day to keep numbers on the sand down 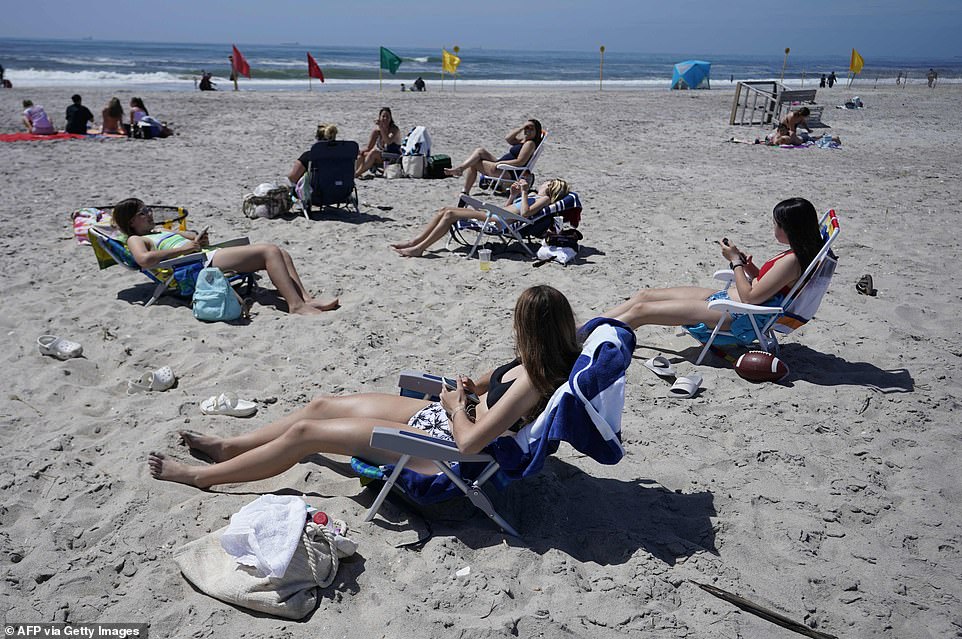 The Long Beach, New York,  2.2-mile boardwalk, which has been closed for two months amid fears of spreading COVID-19, will only be available to city residents after it reopened on Friday. Pictured a group sits separated on the beach Friday morning

With beaches on Long Island, New York, also open to residents only, locals in New Jersey fear they’re about to be hit with a massive influx of beachgoers from the city.

‘The unfortunate thing is that all the out-of-town people have been cooped up the same amount of time that the locals have been here,’ Christine Barthelme of Point Pleasant, New Jersey, told Associated Press.

‘My family will do mostly what we do on every holiday weekend here: relax in our backyard, have a barbecue and light the fire pit.’

Some locals are ready to welcome New Yorkers back, however, as hotels prepare for their own reopening along the Jersey Shore from June 1.

‘New Yorkers have helped us for many years,’ Dillon Mullock, general manager of the Chalfonte Hotel in Cape May, told New York Daily News.

‘As long as everyone keeps their distance, I don’t think there could be a safer place.’

Millions of Americans are set to emerge from coronavirus lockdowns and take tentative steps outdoors to celebrate Memorial Day weekend at beaches, cookouts and family gatherings.

Restrictions on beaches were pictured on Long Beach, New York,on Friday as the state also began their reopening. 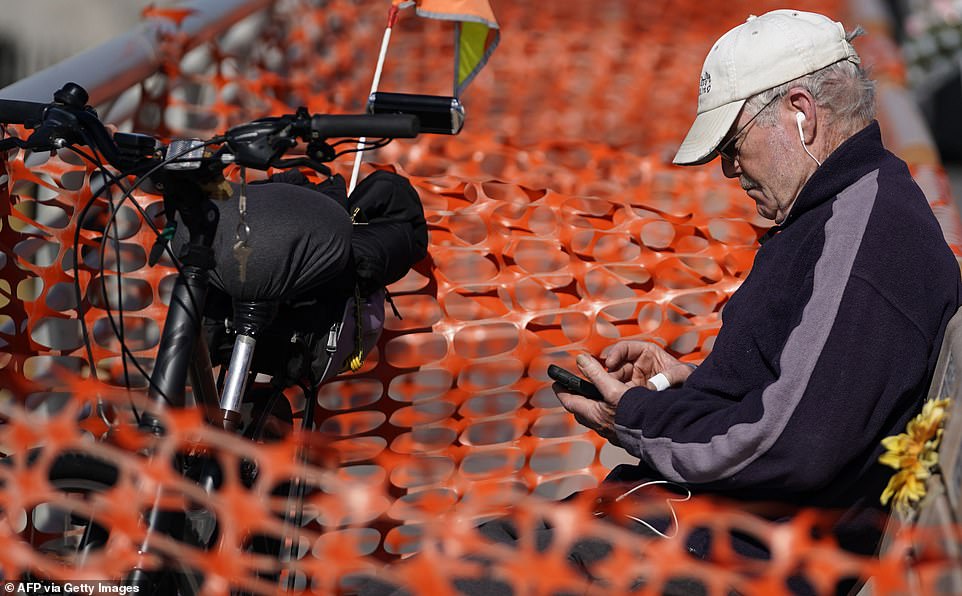 A man sits on a bench among others covered in netting along the boardwalk in Long Beach, New York, on Friday. New York reopened most of its beaches from Friday but social distancing restrictions such as this were kept in place 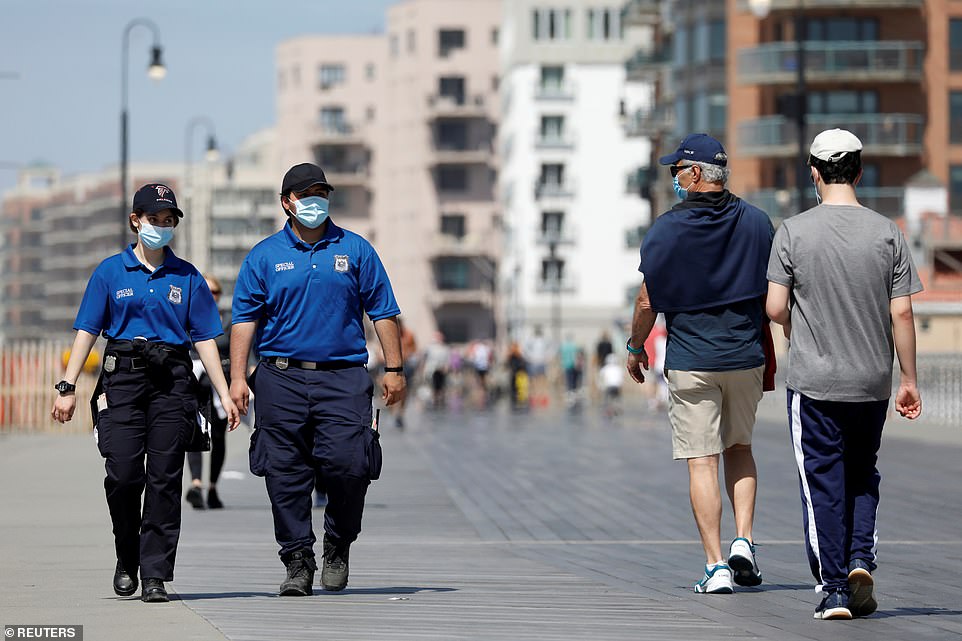 Special Police Officers patrol the boardwalk at Long Beach on the first day that New York beaches were opened ahead of the Memorial Day weekend. Long Island beaches have only reopened for residents to prevent against spread of the virus 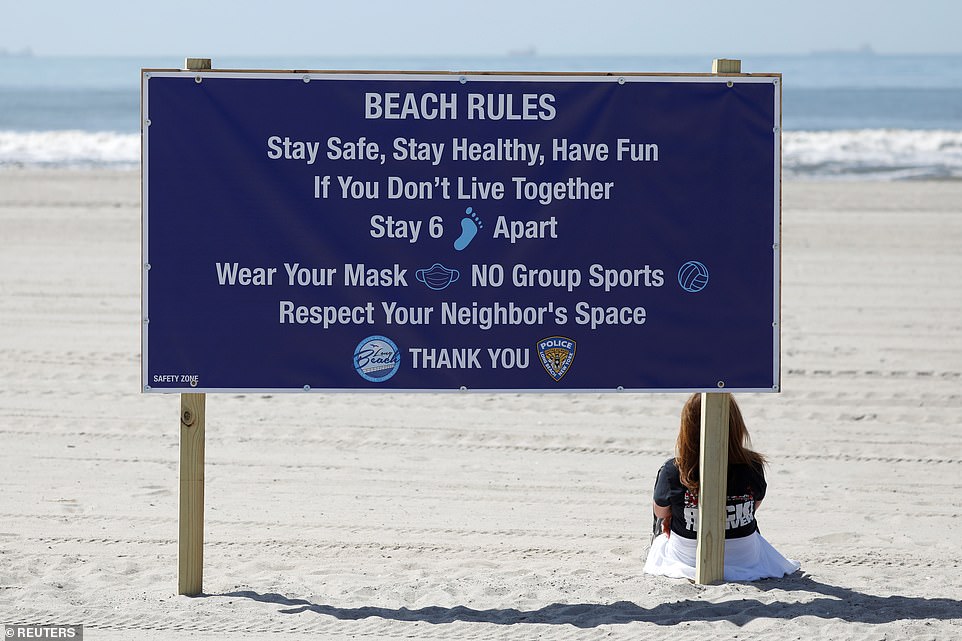 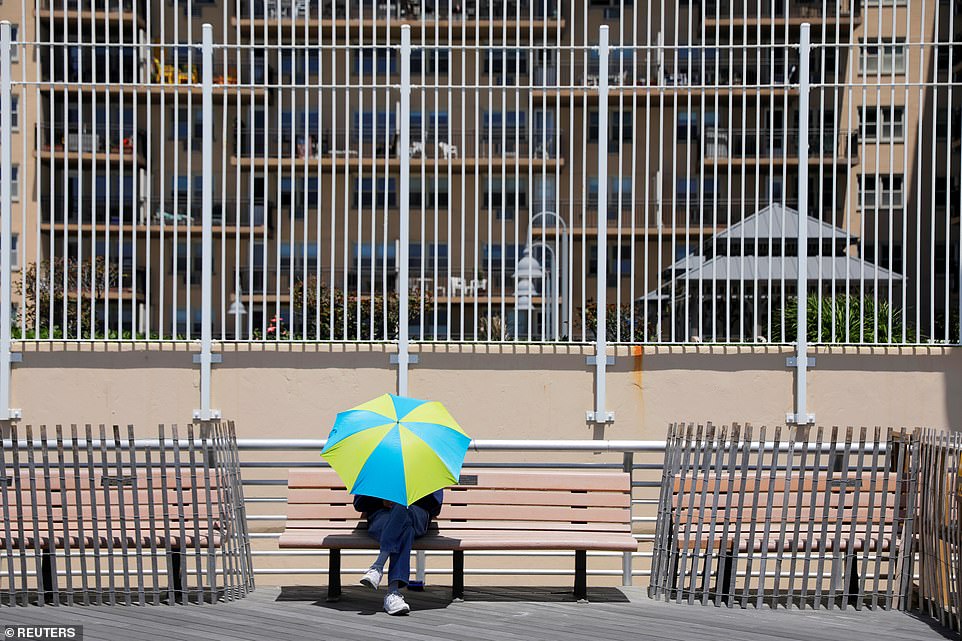 A person sits on an open bench among others fenced-off to promote social distancing on the boardwalk at Long Beach, New York. Millions of Americans are set to emerge from coronavirus lockdowns and take tentative steps outdoors to celebrate Memorial Day weekend at beaches, cookouts and family gatherings but social distancing is still encouraged

Public health officials have raised concerns, however, that large gatherings could cause outbreaks to come roaring back.

Medical experts warn that the virus won’t take a holiday for the traditional start of summer.

The Centers for Disease Control and Prevention continues to recommend that people stay home, avoid crowds and connect with family and friends by phone or video chat.

Dr. Seth Cohen, an infectious disease expert at the University of Washington Medical Center-Northwest in Seattle, advised that people who do celebrate keep their distance from one another, wear masks and avoid sharing food and drinks.

‘Punch bowls. Nachos. These things are a no-no,’ Cohen said.

The holiday weekend arrives amid the bleakest economy in decades.

Tens of millions of people have been thrown out of work since the virus hit hard in March and forced businesses, including many popular summer destinations, to shut down at least temporarily.

Unemployment has reached its highest level since the Great Depression, and on Thursday, Federal Reserve Chair Jerome Powell warned that prospects for a recovery will remain unclear until the health crisis is solved.

Many long-running Memorial Day commemorations of the nation’s fallen military heroes have been canceled or downsized, including concerts and fireworks shows. 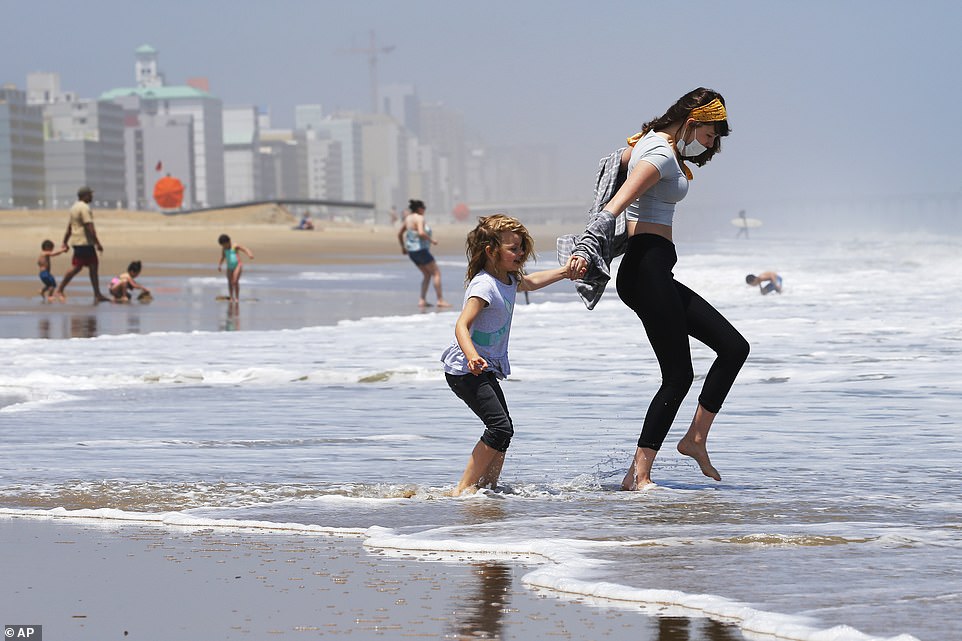 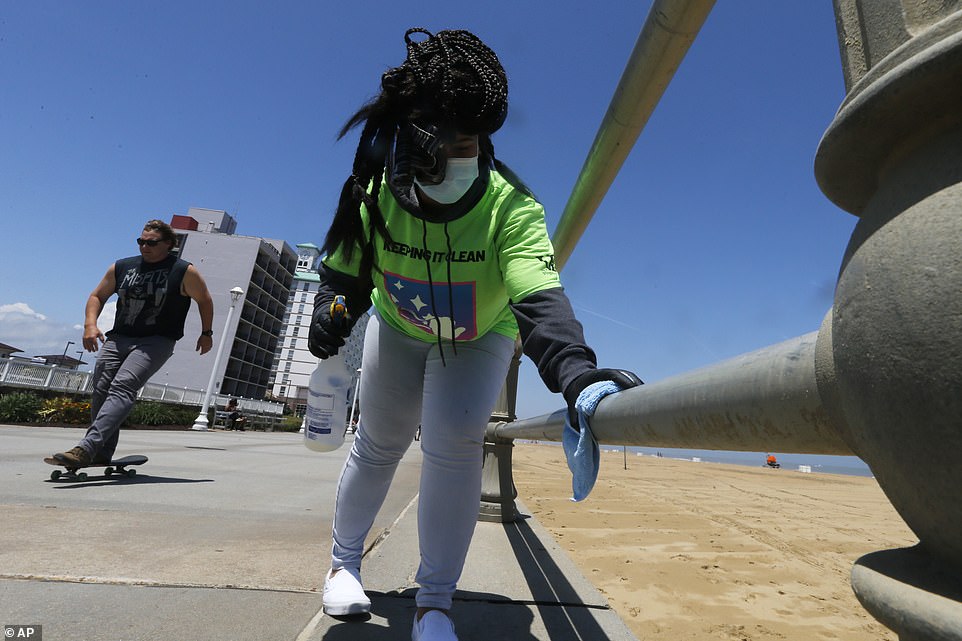 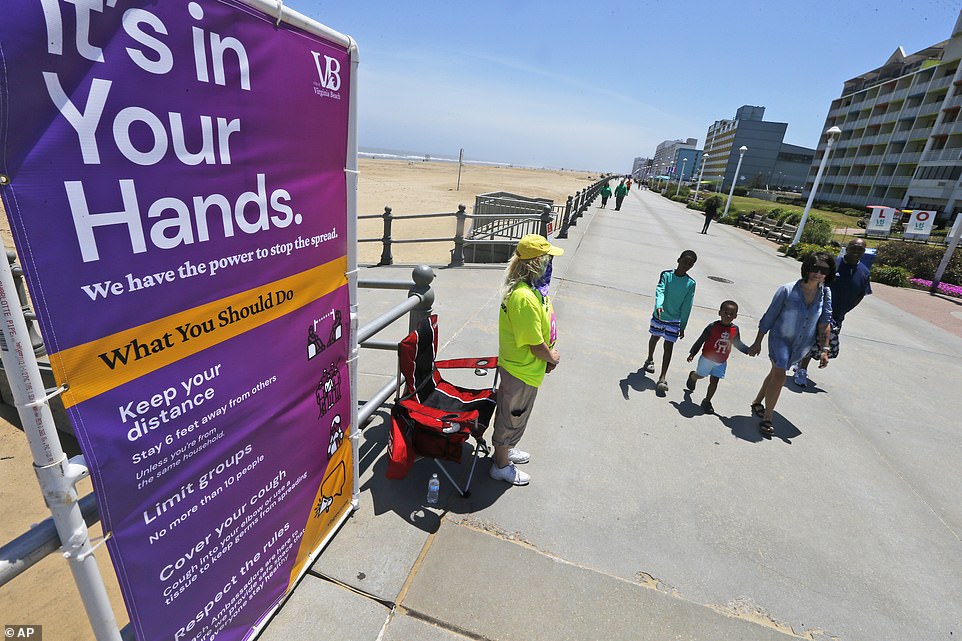 Parks, beaches, campgrounds and swimming pools remain closed in much of the country.

But plenty of popular public spaces will be open – with restrictions.

In Virginia Beach, Virginia, the famed 40-block boardwalk and sandy shoreline is open beginning Friday, but people must stay 6 feet from non-family members, with groups limited to 10 or fewer.

Group sports such as volleyball will be prohibited, along with tents and alcohol consumption.

Mayor Bobby Dyer said about 150 ‘beach ambassadors’ in red shirts will be deployed to ‘diplomatically’ ask people to follow the rules.

In the absence of clear federal guidance, it´s largely been left to state and local officials to figure out how to celebrate the holiday safely.

Social-distancing rules and bans on mass gatherings remain in place throughout much of the country.